From a singer who in Fiery Furnaces could come across as someone backing you into a corner and talking a mile a minute while giving you the unsettling feeling she’s thinking over every word as she says it, music that, with no sense of hurry, wraps each song around the next. Angelo Badalamenti synths from old Julee Cruise records carry the tunes as if teaching them how to swim. It’s a report from a certain state of mind, one that’s saying, Time out. And as one number fades into another, a bigger question: And what if I said time out and froze everyone in the world in place and walked away? What would that sound like?

There’s a lot of nice art in the Louvre.

The smugness of the poses doesn’t erase the thrill of the faster-than-sound words coming out of Beyoncé’s mouth.

His death record, and if on the original album the chant of the title song seemed almost too much to take, here the killers — and they can make you skip a breath — are “Roll Another Number” and the oh-so-casual fatal dope deal of “Tired Eyes.” There’s a lot of stage talk, particularly about the stripper Candy Barr. “We’re doing OK in the Seventies,” Young says near the end of a show recorded in late September 1973. “We really are. History’s coming back” — there’s that displacement of someone historicizing a moment as it takes place — “everything’s OK.  Spiro says it’s all right.” The vice president resigned on October 10.

4. Dana Milbank, “Finally, a president with the guts to stand up to Canada,” Washington Post (June 11)

“They inflicted Nickelback on us. We did nothing. They sent us Justin Bieber. We turned the other cheek. They were responsible for one abomination after another: Poutine. Dipthong vowels. Hawaiian pizza. Instant mashed potatoes. Ted Cruz. Still, we did not retaliate — until now.”

Two young children idly singing “Nation-wide…” and you realized that this lilting, wistful insurance commercial, bathing the airwaves with Brad Paisley and Leslie Odom Jr. and Tori Kelly offering the tune as if it held more truth, more revelation, more of themselves than anything they ever recorded before, had already colonized the minds and corrupted the aesthetic sensibilities of the nation’s youth, until the kids finished the line: “…is suicide.”

“Tonight, there was a surreal moment on Jeopardy. The category was Combat Rock, and the $800 clue was ‘Pere Ubu: 30 Seconds Over ________.’ None of the contestants knew the answer, of course, and Trebek had to say (in a tone that made it sound as though he thought the answer was obvious), ‘What is Tokyo.’ I think there must be an Ubu fan lurking among their writers. Either that, or the apocalypse is upon us.” 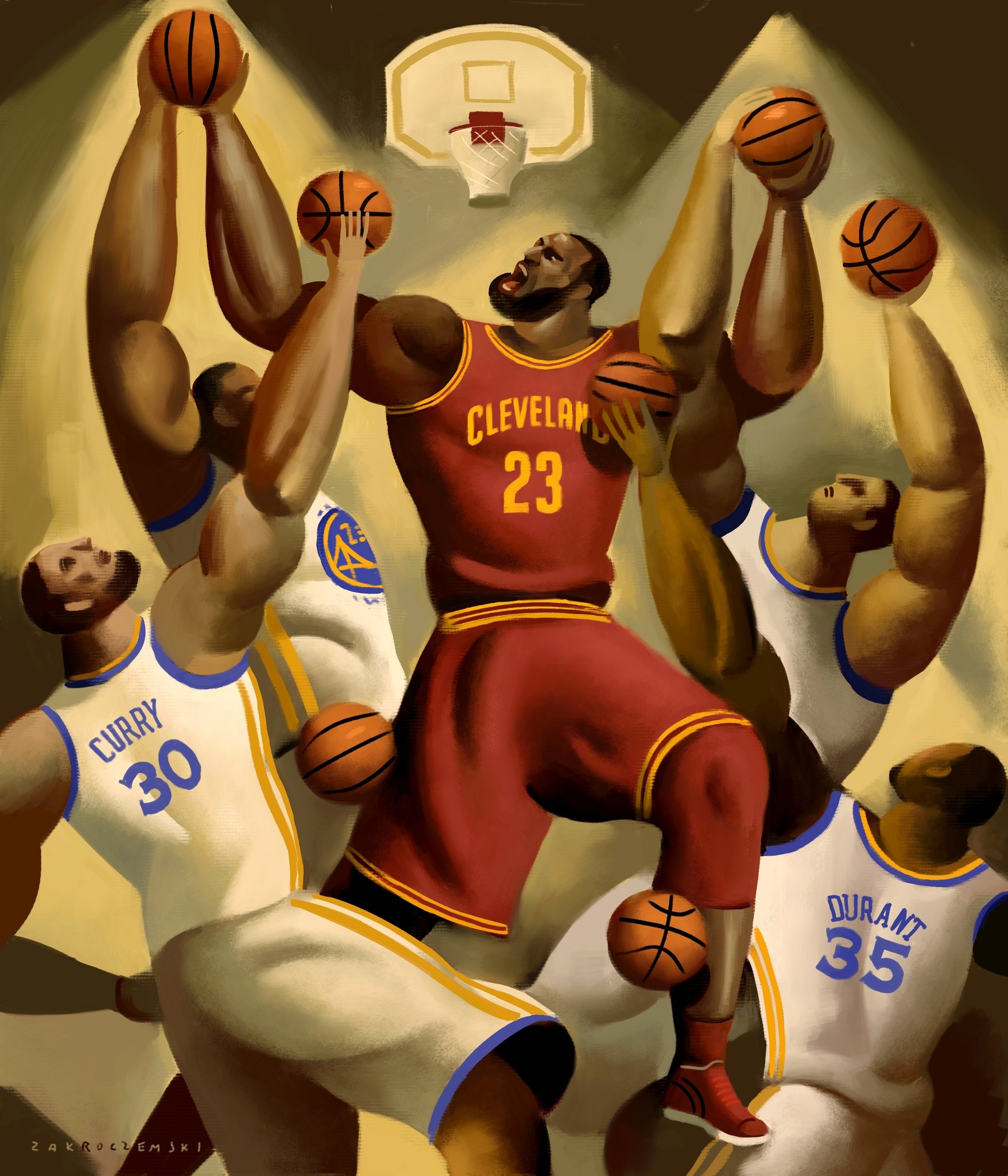 “How can you root against LeBron?” a friend asked. “Because I’ve been a Warriors fan for more than forty years and I live in Oakland?” I said. “But it’s like rooting against John Henry!” he said — and the next day, taking up more than half a page, was a blazing, Cubist-like painting by an artist whose work usually appears in the Buffalo News showing just that: an embattled but indomitable giant stopping the balls of four other muscled men as if they were just so many steam drills. And then LeBron broke his hand. 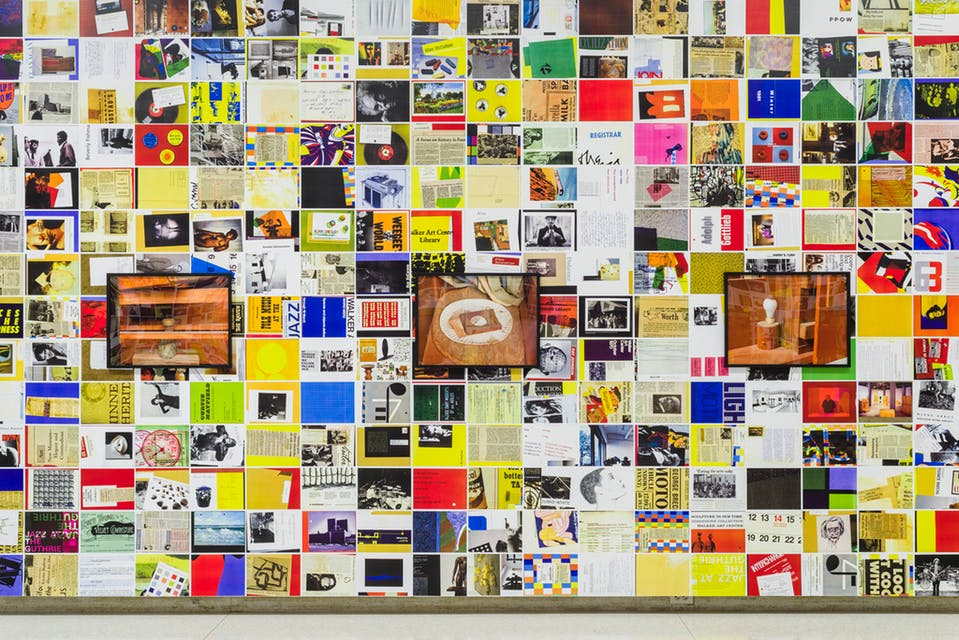 Born in Cleveland in 1944, working out of Los Angeles, Ruppersberg practices ideas in action, and despite the time covered in this vast but uncrowded retrospective the feeling was that anything that might catch your eye could have been made either fifty years ago or the day before yesterday. Among dozens of other works that could as easily be called phenomena as constructions, with a revisit to the 1969 Al’s Café (where among the all-non-food items on the menu the cheapest was a diner plate with a 45 of the Kingsmen’s version of “Louie Louie”) and a room devoted to blowups with cutouts of Uncle Scrooge’s battle with the Maharajah of Howduyustan over who can build the biggest statue of himself, my favorite was the 1996 installation Good Dreams, Bad Dreams — What Was Sub-Literature, with a announcement for “Lecture today at 4 PM,” which unfortunately was idea, not action, because the piece really made you want to know. There were real books in a vitrine, and rows of titles on the wall behind it: Was an 1891 cheap paper Oliver Twist sub-lit because of its format, or its writing?  What about a gorgeous edition of Evangeline? Classics Illustrated versions of The Adventures of Huckleberry Finn and Typee? You could probably put money on Jack Hanley’s Let’s Make Mary as sub-literature, but what about Mickey Spillane’s Kiss Me Deadly, which may have been a lousy book, but was made into a great movie? The titles were a riot of pure id and the actual books were the mental attic of a whole country.

9. Here to Be Heard — The Story of the Slits, directed by William E. Badgley (Head Gear Films/Moviehouse Entertainment)

A documentary about the punk band that began in London in 1976, dissolved in 1982, put part of itself back together in 2005, and ended when singer Ari Up died in 2010 at 48. It’s workmanlike, and because of the story as it was captured then and the present-day testimony of bassist Tessa Pollitt, drummer Palmolive, and guitarist Viv Albertine, stirring. There are bits of revelation that capture the essence of both the band’s mission to confront, attack, and destroy the marginalization of women in culture and of rock ’n’ roll as such, as when Palmolive describes the Slits on the Clash’s White Riot UK tour in 1977: “Sometimes we were playing different songs. And we couldn’t even tell! Sometimes we could tell”. There is the absolute primacy given to the clothes the Slits wore, as public action, free speech, political demonstration, and pleasure (Albertine, on “feeling like myself for the first time in my life”: “They couldn’t tell if we were male or female, or even human”), and the way the end of the band felt like a death sentence. “I fell into the terrible bath of heroin,” Pollitt says; Albertine, who as a Slit was all screaming blond hair and frilly white slips, “started dressing in brown clothes. I let my hair go back to brown.”

For his role as the tribune of McCarthyism, mob fixer, and AIDS death Roy Cohn in Angels in America — a role that took on far more resonance in this year’s revival than it could have had when the play premiered in 1993, since in the 1970s Cohn was also a mentor to Donald Trump — Lane produced a real thrill in the way that, in under two minutes, he thanked twenty-two individuals and groups, often in detail, with nuance, without a crib sheet, without pauses or hesitations, until the end, when he thanked his husband. It felt like a kind of rounded farewell, not that he doesn’t still have work to do. “Where’s my Roy Cohn?” Donald Trump said in a moment of frustration not long ago, and you can just imagine what Lane would make of the chance to materialize in his face.

Thanks to Steve Perry and Bill Brown.