Gene Simmons can say that rock is dead all he wants, but that hasn’t stopped the Black Keys from keeping the spirit of the genre kicking. Since their formation in the the early aughts, the Ohio duo has slowly risen to become rock ’n’ roll’s foremost act. Albums like Brothers and El Camino have churned out hits like “Tighten Up” and “Gold on the Ceiling,” as well as a string of ad themes that you can’t seem to escape (they famously poked fun at themselves on an episode of The Colbert Report with fellow admen Vampire Weekend). This past spring, the Black Keys released Turn Blue, a bluesier-than-ever set that is sure to spawn more than a few festival and stadium favorites. Determine which ones will take the crown tonight.

Two years ago, an isolated demonstration in Zuccotti Park was swiftly mutating into a national movement, and Stephen Colbert wanted in on the action. The Comedy Central host headed on down to the Occupy Wall Street protest where he encountered “two young idealists”–Justin and Ketchup.

During a pair of interviews filmed in a Financial District penthouse overlooking the park, and broadcast over two consecutive episodes of the Colbert Report, they taught Colbert about the mic checks, temperature checks, and points of process used to build consensus at an Occupy Wall Street general assembly.

In return, he offered to co-opt the movement for a tidy sum of money.

It’s Occupy’s second anniversary and, two years on, we’re still mulling a lot of questions over–where have all those activists gone? Did camping out in Zuccotti Park change their lives in any meaningful way? Did Occupy make a difference at all?

And: who better answer those questions than the two young idealists from the Colbert Report?

Two years ago today, Justin, a New York City teacher, was at Zuccotti Park. He was there on day one, and he stayed until protestors were forcibly removed by police.

“The eviction was painful for many of us,” Justin says. “Our hopes and dreams were suddenly smashed and much of our personal belongings were confiscated, but beyond that, it was painful because we were so nonviolent, we were so peaceful.”

Looking back on it now, Justin says the eviction wasn’t actually all bad–“It created a sort of diaspora that I believe continues to this day, of people all around the country, all around the world, who shared experiences in that space and are now off doing many, many pieces of social justice activism–some of them coordinated and some of them not.”

If you want proof that Occupy’s impact is still being felt today (other than campaigns like Occupy Sandy, Occupy Student Debt, and Occupy Your Home, an anti-eviction movement) he says just take a look at the New York City mayor’s race: “You have Bill de Blasio, who spoke in Zuccotti Park, who was the only mayoral candidate who said he would not have shut down Occupy Wall Street, as the forerunner to be the next mayor of New York City.”

Justin now directs an after-school program and summer camp born out of an Occupy-inspired protest against New York City school closures. (Not for money though–he does “freelance tech consulting, graphic design, web design to support myself.”) He says he keeps in touch with some of the folks from Zuccotti, but “I haven’t spoken to Ketchup in a long, long time.”

Catching up with Ketchup, after the break.

Before Occupy, Ketchup–who still goes by that name–lived in Chicago. She was a recent Northwestern graduate, a theater major, working on a web series about “social and ecological justice issues” when she read the call for activists to come occupy Wall Street in Adbusters.

Ketchup figured she’d talk to folks at protest and get some footage for her web series, but, she says now, “I got very involved pretty quickly, and kind of let that fall off for the time that I was in New York.”

She was only in Zuccotti Park for a total of six weeks. “By the time I left New York I was in a very difficult-to-cope-with place, emotionally, which is something I’ve heard echoed by a lot of other people who were involved,” Ketchup says.

“It was a very difficult experience because, even without witnessing or experiencing police brutality, which was very real and traumatic,” within the protest community, she says, “people’s emotions and tensions were running very high.”

That aspect wasn’t confined to Zuccotti Park, either. Back in Chicago, she found a similar dynamic at work in that city’s Occupy protest. It’s part of the reason Ketchup is no longer active in the movement.

Another part has to do with her appearance on Colbert. “I was little bit paralyzed by it–concerned that I had maybe not adequately expressed whatever people within the movement might have wanted me to be expressing, and I think it was part of why I kind of, sort of disappeared off the face of the earth,” she says. “I was just very worried that anything I said would be taken as representative of Occupy and that’s just a big load to bear.”

She’s still in Chicago today, working full time (although she declines to say what she does, or to even name the industry) and still working on that web series too.

“I went to school to be an artist and I think my greatest contribution can be as an artist,” Ketchup says.”This is the avenue that I have always wanted to take and plan to continue to take. I think there is more than one way to be an activist, and this is my way.”

Who doesn’t love a good Weiner joke? They’re simple, yet effective, and since Tuesday–the day New York City mayoral candidate Anthony Weiner publicly confessed that “some” of the explicit photos and chat logs unearthed by TheDirty.com were legitimate–comedians (and people who just think they are comedians) have been going nuts with the dick jokes.

Luckily for them–and us–these jokes a) have universal appeal and b) don’t ever seem to get old. Case in point: Way back in 2011, during Weinergate I, the young woman embroiled in the latest scandal retweeted a few jokes of her own.

Here are the ones that Sydney Leathers, the young political activist identified as Weiner’s alleged sexting partner, retweeted using her Twitter handle @sydneyelaineXO, and preserved for posterity by a social media research firm. 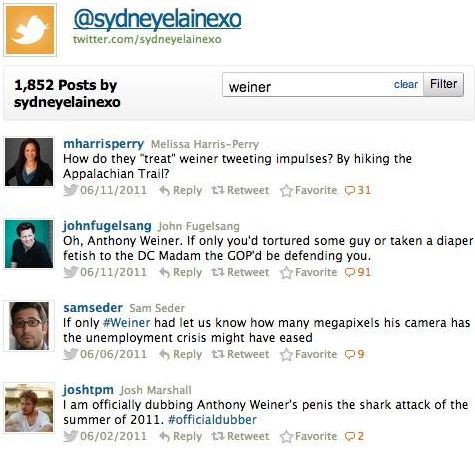 The long-running improv show ASSSSCAT 3000 is often the place to catch comedic talents from Saturday Night Live, 30 Rock, and The Colbert Report. But tonight is the first time you’ll see a star from Girls. The very funny Lena Dunham will be showing off her improv chops at A Is for ASSSSCAT 3000, a special benefit show for the activist forum A Is For . . . , which works with other organizations to protect  reproductive rights. Lizz Winstead, a  co-creator of The Daily Show, hosts the  hilarity.

While an exclamation mark in a band name does not always guarantee mad brilliance (are you still Panicking! at the Disco?), it does serve Movits! of Lulea, Sweden, quite well. Their winking combination of swing and hip-hop (oh, yeah . . . in Swedish) only sounds daunting in description: It’s overtly giddy, it probably skirts logic in any language, and it’s Colbert-approved (they appeared on The Colbert Report in 2009.) Fall into this pleasantly confusing, incongruous haze: There’s really no other option by now.

It’s not just that comedians Nick Prueher (The Late Show With David Letterman) and Joe Pickett (The Colbert Report) spent the last two years hunting down strange and forgotten videotapes in thrift stores, garage sales, and Dumpsters—it’s the way they show scenes from bizarre industrial-accident films, sexual-harassment sensitivity videos, and disturbing home movies while narrating with a funny patter that makes the Found Footage Festival an unexpected pleasure. Look for an exercise video featuring Playgirl’s 1985 Man of the Year, an instructional video on how to toilet-train cats, and tons more.