If Obama hasn’t exactly turned out to be the man of all your liberal fantasies, you’re not alone. The folks behind the Left Forum—that annual international powwow of liberal activists, organizers, and intellectuals—know all too well of the disappointment and confusion that has occurred among their base. This year’s theme, “The Center Cannot Hold: Rekindling the Radical Imagination,” attempts to re-energize and bring new focus to the fight. Panel discussions include “Fight the Right, Build the Left: Strategy and Tactics for the 2010 Elections,” “The Crisis That Gives the Capitalist Class Nightmares,” and “The Empire Strikes Back: Obama and the Teabaggers.”

The movie begins: Episode V–The Empire Strikes Back. George Lucas, the most benevolent and least gurulike of the new California moguls, is officially telling­ the faithful that the beloved Star Wars was merely Episode IV in an evolving triple trilogy. The most popular movie ever, made for $10 million and released in 1977, introduced a rebel skirmish in a far-­off galaxy. The 1980 sequel, made for $20 million, continues the fight between hero Luke Skywalker and villain Darth Vader. And Lucasfilm Ltd., the most pragmatic and least mystic of the new ministudios, has announced that Episode VI, due in 1983, will conclude the duel to the death. Has anyone in this Force-fed organization figured out that at the present rate of progression Star Wars IX will come in at over $2.5 billion in the year 2001?

Meanwhile in Episode V, Mark Hamill, Carrie Fisher, and Harrison Ford are back as the most likable gauche trio since Buster Crabbe, Jean Rogers, and Frank Shannon blasted off in Flash Gordon. The severe limitations of the Star Wars juve­niles, however, make no difference to the master plan.

Empire has recruited a top-notch dra­matic filmmaker in Irvin Kershner as its titular director, but he is not permitted the luxury of reintroducing many existing characters. In a script that calls for an adolescent romance between Princess Leia (Fisher) and Han Solo (Ford) on the Hen­ry Aldrich level of affirmation through insult, Kershner’s hands are haplessly tied and the relationship stays safely within kiddie bounds. But Kershner does get in his licks. He has the chance to introduce into the series Billy Dee Williams as a dashing rogue adventurer, and while a new set of doe eyes is a bit much, the smooth assimilation of a black hero who is just as democratically callow as his fellow actors should lay to rest some of the silly accusations of racism and reverse racism aimed at the original. Kershner is probably re­sponsible also for a jarring shift in tone between the films. Star Wars, with its cool, stylized comic-book action, was sweetly and innocently a G-spirited film, but a more adult rating was requested for respectability’s sake. Empire is tartly and calculatedly, especially in its revving up of Dolby stereo into a weapon of subliminal edginess, a PG hard-action movie.

Otherwise, Lucas’s midway opus — and let it be stated once and for all that Lucas, like Disney and Selznick, is a true auteur from conception to final cut — is startlingly candid about its structure as a serial interruptus. The original’s leisurely introduc­tions, the sense of airy exploration of new worlds, and the pageant-like story with beginning, middle, and end are all gone. Empire careens willy-nilly from peril to battle to cliff-hanger. The accelerated pace is almost tiring so that the new movie, only three minutes longer, seems to unravel more slowly. Within an hour, it’s clear that nothing finally will be resolved in Empire, that neither good nor evil will triumph, and that the characters’ fates will be left dangling in various outposts of the galaxy. Empire is the first motion picture of its cost without a monster to leave its audience on hold.

Shades of Mongo! Empire couldn’t be closer to the experience of walking into the middle five chapters of Flash Gordon Con­quers the Universe. There are five new locations, hence five sequences, very neat, very economical: There’s the ice planet of Hoth, the swamp of Dagobah, an asteroid belt, the Empire’s command battleship, and the floating city of Bespin. On Hoth, the animated sequences of riding snow beasts are crude and amateurish. The craft is far below Ray Harryhausen’s ex­pertise. It doesn’t matter. The film keeps moving. The snow beasts are quickly for­gotten in the swift choreography of an aerial dogfight against attacking mechanical behemoths, a speeding movement that later, through exquisite special effects, will climax in a race among dancing asteroids.

The Star Wars modus operandi is settl­ing down to a patchwork of scenes shot with actors in England on vast sets and those shot in miniature in Lucasfilm’s California factory. The split causes a defi­nite loss. The steering is so much in the hands of the special-effects men that one no longer gets a sense of the characters showing off their driving skills. The one set carried over from Star Wars, the battered smuggler’s ship Millennium Falcon, has been reduced to a running gag: it never gets in shape for a leap to hyperdrive, and there’s no real sense of Han Solo and Chewbacca manning the controls.

There are other slippages, none of which favorably reflect on Lucas as the preserver of the Star Wars mythos. What I liked most about the original was the way it overlapped (or robbed from) my favorite sci-fi pulp: the straight-arrow militarism of E.E. Doc Smith, the fatalism and extrasensory gobbledygook of Frank Herbert, and the rover-boy adventurism of Larry Niven, one of whose favorite charac­ters is the Kzinti, a 15-foot, intelligent, fighting tomcat. Chewbacca, the wookie, was also once comically fearsome. In Em­pire, he’s a shaggy pussycat and a victim of sentimental domesticizing. Let us also mourn Alec Guinness’s Ben Kenobi, now relegated to a spectral holograph bringing infusions of the Force, making his first appearance to a near-frozen Luke like a Saint Bernard in the snow. C-3PO and R2-D2 are back, but here they seem awkward adjuncts, not central messengers of grace.

In many ways, Star Wars IV and V get away with murder. As Lucas has said of its hero: “Luke is a pawn in an adventure that has been going on for longer than his span of years.” Yeah, and for longer than the audience’s span of attention. What empire are we faced with? What emperor? (We finally get a one-minute hologram of His Badness in the new film.) What re­bels? What Force be with you? Lucas has trained a knot-hole eye on a science-fiction adventure; he has not drawn an epic can­vas, but has pasted together a slick, clean, noninterlocking collage of derivative bits and pieces. So let’s have no more Time talk of Lucas/Homer and Lucas/Bunyan. Empire is simply a minor entertainment, but I admire the moxie of betting $20 million on one-ninth of a matinee serial to be continued into the next century.

THE EMPIRE STRIKES BACK. Directed by Irvin Kershner. Written by Leigh Brackett and Lawrence Kasdan, from a story by George Lucas. Produced by Gary Kurtz, A Lucasfilm Ltd. pro­duction released by 20th Century-Fox. 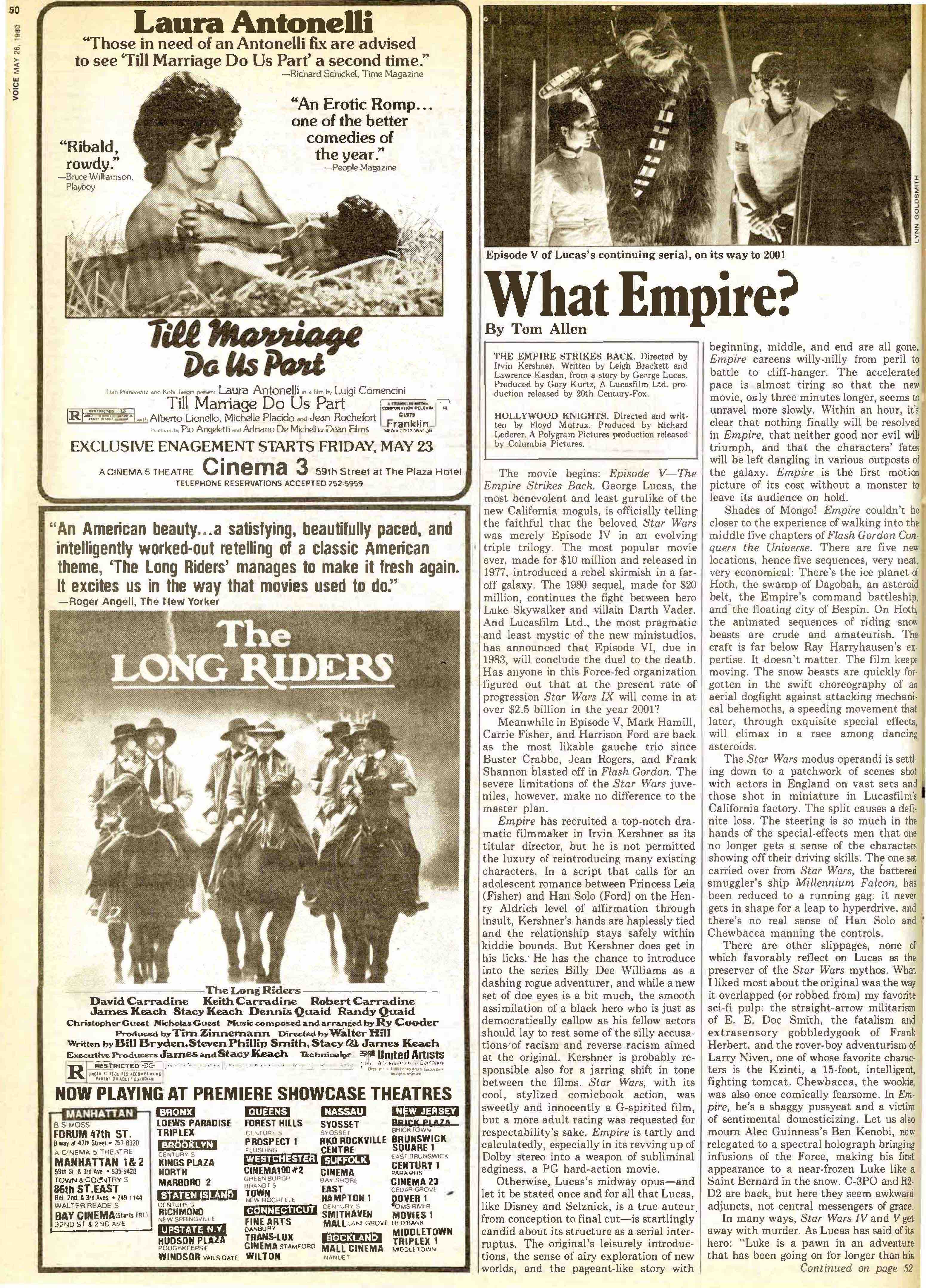 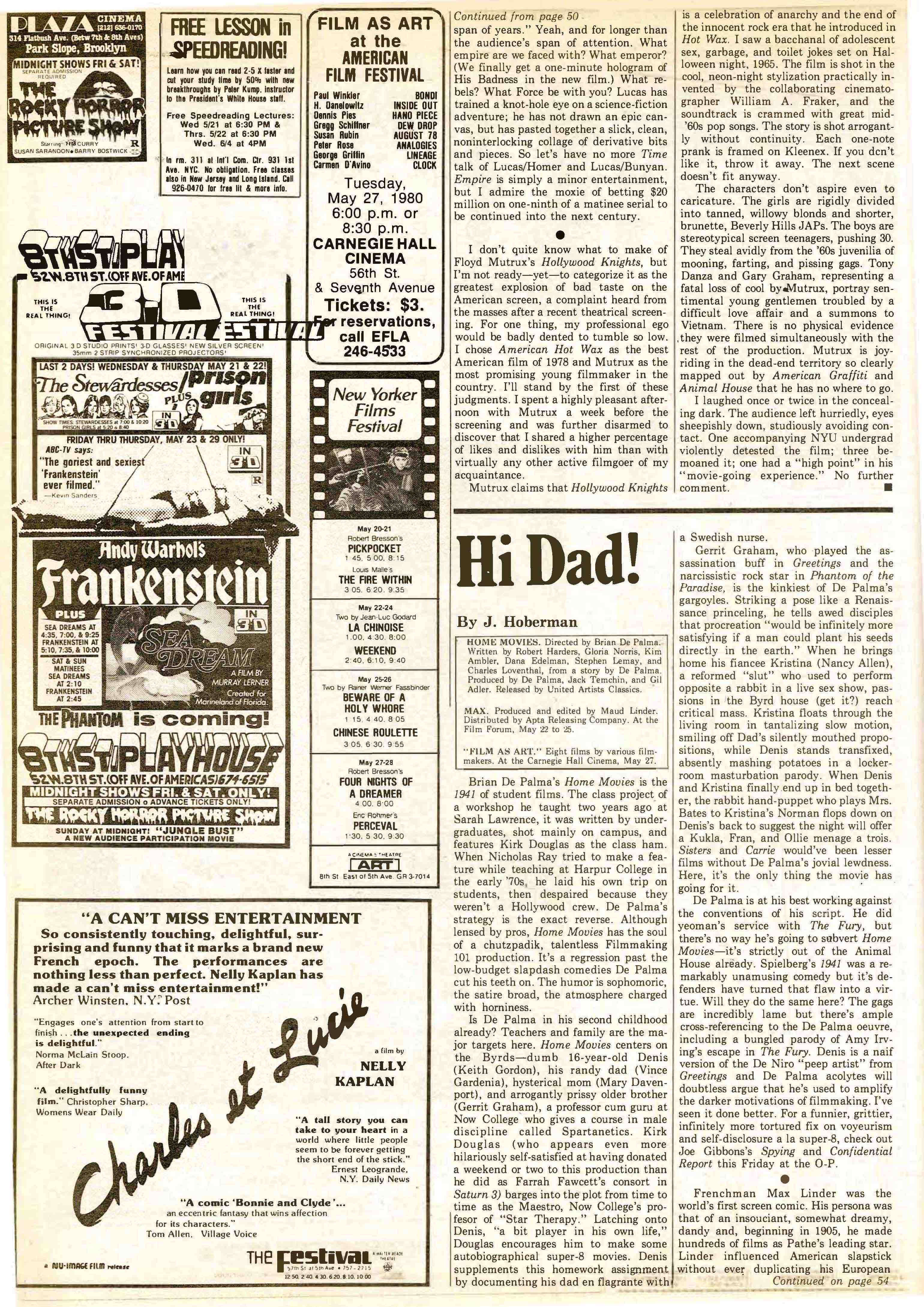