If you haven’t taken advantage of a trip to Queens for the annual U.S. Open, you might not realize you’re missing out on a major food event — and also some live tennis. Not to worry, as the folks from the United States Tennis Association (USTA) are offering an early taste of the food that awaits those interested in checking out this year’s tournament.

Beginning Monday, August 11, and continuing through Wednesday, August 13, a USTA food truck will stop at select locations throughout Manhattan to offer up complimentary items including lobster rolls, brisket from Hill Country, and Richard Sandoval’s steak tacos. Guests can also choose from David Burke’s filet sliders as well as chicken or meatball sandwiches.

Festivities kick off at Madison Square Park at noon. At noon on Tuesday, the truck will be on site at Union Square. The three-day tour wraps up at Bryant Park on Wednesday starting at 5 p.m.

All items are available on a first come, first served basis.

Tennis aficionados who seek out the truck will receive a special promotional code to receive select two-for-one tickets. During Monday’s event, fans get the opportunity to take a photo of the U.S. Open trophy.

“A lot of sporting events, people assume you just have hot dogs and hamburgers. The U.S. Open has always had those innovative food offerings. We wanted to bring those interesting options to a broader audience,” says Nicole Kamkam, managing director of marketing at the USTA whose team helped launch the new endeavor.

Though the truck won’t be making the rounds once Rafael Nadal and company start swinging their racquets, guests can expect to find a wide variety of food — and adult beverage — options beginning Saturday, August 23. You can peruse the full lineup of dining experiences available on the U.S. Open’s website.

Spring is definitely, at long last, in the air, which means your social schedule should be ramping up as your friends emerge from hibernation. Gather a crew for a cheap drink and food deal at one of this week’s hand-picked happy hour spots.

With a happy hour that lasts until 8 p.m. and a late night special from midnight to 4 a.m., this Hell’s Kitchen spot offers up some delicious craft beer on the cheap whatever shift you’re working. Late night, all draft beer is $5. The options range from Kuka Blonde Blue Point Blueberry Ale to Abita Purple Haze, all suitable brews for spring. Earlier, look for a selection of shots, beers, and well drinks for $5, too.

Displaced Bostonians looking for a friendly face during Red Sox games are welcomed at this lively East Village sports bar, named after the father of the cocktail, professor Jerry Thomas. Deals here include Boston brews like Sam Adams, which are $4 on Tuesdays during baseball season until 7 p.m., 25 cent wings, and $10 pitchers on some evenings. Check out group trivia on Wednesdays and Sunday night HBO screening parties with True Blood and Game of Thrones drink specials for all fans.

$2 latkes and $3 pastrami sliders headline this food friendly happy hour from 4:30 to 7:30 p.m., though there are plenty of deals on booze, too. Cucumber mint margaritas are $6 while Six Point drafts and bottled brews are five bucks. You’ll also find glasses of red and white wine for $6.

With less than one month until Cinco de Mayo, you might want to practice your tolerance for sangria and frozen margaritas, which are $5 at this happy hour from 5 to 7 p.m. Look, too, for $5 beer and wine plus plenty of cheap grub like chicken tinga tacos. This place is also located a short distance from Gantry Plaza State Park, which offers picture perfect views of the Manhattan skyline.

Apparently, Mario Batali spends his summers in Leelanau County. That must be in the Finger Lakes or in the Adirondacks, right? Wrong! It’s a rather obscure part of northwestern Michigan. Not in the UP (Upper Peninsula) either, but right across Lake Michigan from Green Bay, Wisconsin – to help you football fans get a bead on the location. 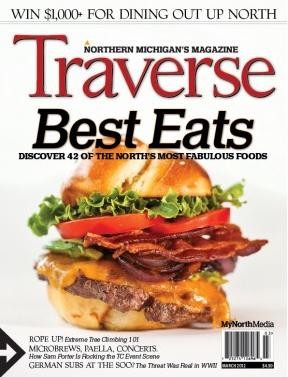 In the new issue of Traverse, a glossy monthly mag – call it the Northern Michigan version of New York magazine – Batali gives his favorite eight things to eat within easy driving distance of his vacation home. You could probably triangulate the actual location if you mapped out the recommendations.

Anyway, read the snippet on the magazine’s blog for yourself, but here are a couple of highlights:

He likes the pulled pork sliders at The Garage in Northport, of which he notes: “As if eating in a garage were not cool enough already.”

He’s also fond of the pastrami omelet at a place called Frenchies Famous in Traverse City, and some unexpected lunch enchiladas via someone named Miguel at the deli counter of Hansen Foods in Suttons Bay. Of the enchiladas, the orange-clogged chef notes, rather tersely: “Sassy enchilada sauce. Muy bueno.”

Batali makes you want to run up there and eat all these things right away. But it’s probably best to wait till the waist-high snow melts.

Spouting inanities, the “chef” of White Castle shows you how to make turkey even more boring — and freak out your guests in the process. No pickles? WTF?

The Upper East Side’s year-old Kaia Wine Bar specializes in the vittles and fermented grape products of South Africa, and there’s some pretty damn interesting stuff on both sides of the ledger.

On a first visit, Fork in the Road checked out some of the African nation’s most famous snacks. Included were three sliders that, left to right, were made with chicken, ostrich, and elk. The most exciting, hands down, was the last — chunkily ground, dark and richly flavored, and topped with mint puree and Peppadew, a sweet pickled pepper.

Next in our affections was the one made with ostrich, which came anointed with apricot compote — normally that might not be our cup of tea, but in this case the flavor match was perfect. The chicken was a little dull by comparison. All sliders came smeared with a homemade flavored aioli. 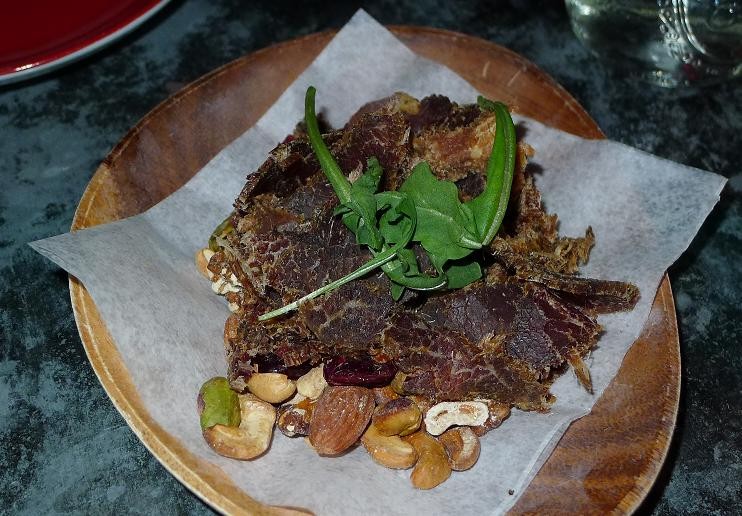 Another great snack is the dried beef jerky called biltong, served with nuts.