A year removed from the murder of 17-year-old Travon Martin, hundreds of supporters took to Union Square yesterday, carrying candles and wearing hoodies, to stand in solidarity alongside Martin’s parents on the anniversary of his death.

They demanded justice for Martin in the case against George Zimmerman, the 28-year-old neighborhood watchman who shot and killed the unarmed teenager in a gated community where Martin’s father lived in Sanford, Fl. While demands for justice were loud and fierce, many in attendance acknowledged that the justice they’d like to see for Martin’s death may never materialize if solely left up to the legal system.

“Jail time, that’s justice, nothing less,” Nicholas Heyward Sr., whose teenage son was killed by a rookie NYPD officer nearly 18 years ago, told the Voice. “The way that this system has operated in the past with all these other cases, I don’t see any justice really coming out of that Zimmerman case.”

His son, Nicholas Heyward Jr., was a 13-year-old honor student whom NYPD Housing Officer Brian George shot dead in the stairwell of a building at their home in the Gowanus Houses in Brooklyn. Brooklyn District Attorney Charles Hynes never indicted George, and his office concluded that the shooting occurred because George witnessed Heyward Jr. playing with a realistic-looking toy gun, (a plastic pop gun), in a darkly lit area, and reacted in a split-second in fear for his life

Hynes refused to reopen the case after glaring conflicts emerged between the DA office’s official report and a deposition given by George two years later. Heyward Sr. says he’s written and petitioned, to no avail over the years, to multiple mayors, police commissioners, and other public officials to review the case.

“My thing is that after 18 years of protesting, it’s time for the people to organize and take these matters to the streets because there’s no way that I can see we’re going to get justice in the court system,” Heyward said. “I’m hoping for the sake of the people that it does.”

Just as George eluded punishment under the pretenses of a justified homicide, Zimmerman maintains that he shot Martin in self-defense. The murder occurred when Martin was heading back to his dad’s house from a 7-Eleven, carrying a pack of Skittles and an Arizona Iced Tea while talking on the phone with his girlfriend. Zimmerman pegged Martin as suspicious, alerted police, then proceeded to defy police advisement not to pursue Martin on his own, leading to an encounter that resulted in the murder of Martin.

Williams was alluding to the fact that it took a massive outcry just to get the police to press charges against Zimmerman, who was permitted to go home on the night of the murder. Actor Jamie Foxx also showed up to lend support for the family and expressed equal bewilderment that Zimmerman wasn’t immediately charged. 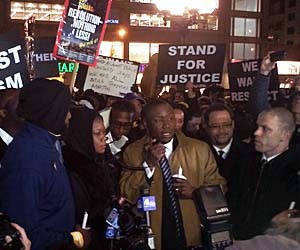 “All we’re asking [for] is simplicity . . . allow the court system to work,” Foxx said. “The things that baffled me the most is that someone can take someone else’s life and go home.”

Martin’s father, Tracy Martin, and mother, Sybrina Fulton, thanked those at the rally and others around the country for their support — while unofficially declaring February 26 Hoodies Up Day.

“It’s a sober day for us . . . It seems like yesterday that Travon was here. The wounds have not been healed but we’re working towards healing [them], and we just want you all to know that we appreciate all the love and support,” Martin’s father said. “Continue to stay with us . . . until the day I die it will be Hoodies Up Day for me.”

Zimmerman is set to stand trial on second-degree murder charges in June. Councilman Williams urged the powers-that-be to bring justice in the Martin case and Mayor Michael Bloomberg and the NYPD to finally clean up the culture of racial profiling and police brutality that has long stained the department’s ranks.

“We want justice and we want it now,” Williams said. “Dr. King said riots [are] the language of the unheard. We are unheard . . . So, please us hear while we’re calm because unheard people do things to be heard.”

Representatives from the New York State Coalition of Hispanic Chambers of Commerce voiced their outrage on the steps of City Hall yesterday over a proposed bill that would lower procurement goals for Hispanic-owned businesses bidding for city work.

Earlier this month, the city announced revisions to Local Law 129, which was created in 2005 to increase the number of Minority and Women-owned Business Enterprises that secure contracts to perform work for the city. The bill would lift the $1 million contract-limit currently in place for program participants, and it would implement better support systems for M/WBE’s .

But those in attendance at yesterday’s rally are fuming over a portion of the bill that reduces procurement goals for Hispanic construction firms from nine percent to four percent.

And, as the Voice previously reported, these groups are promising to use their influence within the Hispanic community to campaign against any politicians who vote for or support the bill.

“I can assure you that any Councilman, who supports this bill, that comes to the Latino community, will face a very angry constituency, inside their district and outside of their district,” Peter Fontanes, head of the New York Association of Hispanics in Real Estate and Construction, said at the news conference. “Anybody thinking of running for mayor who votes for this bill and supports this bill, I can assure they will not get our support. And, we will campaign against them actively.”

The scene outside of City Hall probably didn’t appear all that intimidating to political passersby — including City Council Speaker Christine Quinn and Mayor Michael Bloomberg — as the rally only consisted of maybe ten or so chamber presidents and a few other supporters.

But, Fontanes and other NYSCHCC members insist that they have sway within the Hispanic community, and explained before-hand that they intended for only chamber presidents to show up for the news conference. The coalition has 25 chambers with more than 25,000 Hispanic-owned businesses, according NYSCHCC Chairman Frank Garcia.

Garcia said chamber members are prepared to plaster bodegas, restaurants and other establishments with signs that read “No 4 percent” along with the names of politicians who support the bill.

Fontanes said he doesn’t want the situation to be contentious. He just wants the administration and city council to sit down with his chambers and discuss the parameters of the bill.

“At least bring it back to the nine percent, and then we can start talking from there,” Fontanes said. “The bill is a good bill, but we have a deal breaker, and that is the participation goal at four percent. One of the reasons it cannot stand is that we don’t why and how they got the methodology to get it that low.”

The methodology used to generate the four percent mark comes from a disparity study conducted by an outside consulting firm hired to generate data for the original M/WBE Local Law 129 passed in 2005. Percentage goals are determined by calculating the number of firms qualified to do work versus the number of those firms that actually receive contracts with the city.

Representatives from Speaker Quinn’s office declined to comment, but directed us to testimony from two Hispanic business leaders who voiced their support of the bill at the Oct. 4 City Council hearing on the bill.

“Our association would not be supporting this legislation if we believed this bill would be detrimental to New York’s Hispanic M/WBE’s. This is what a few Hispanic groups are alleging at this hearing and this is simply not the case,” said Alfred Placeres, president of the New York State Federation of Hispanic Chambers of Commerce, in his testimony.

“Yes, the percentage goal for Latino Businesses will decrease from 8% to %4 but this decrease will in fact translate into an increase in Hispanic participation because the City’s procurement pie is increasing substantially,” the testimony says. “For Hispanics, this change significantly increases the value from $28 million to over $80 million.”

NYSCHCC contends that the removal of the $1 million cap will likely mean more money for a few Latino firms, but less for the majority. At yesterday’s rally Garcia questioned the validity of the Hispanic representatives who supported the bill.

“We represent 25 real chambers. I want to emphasize real. We had recently, Gregory Myers from the Mayor’s office say ‘I had a couple of chambers that wrote for this law,’ Garcia said. “They’re not a member of the U.S. Hispanic Chamber of Commerce. We are.”

Garcia also says that the other Hispanic organization that throw its support behind the bill, the Latino Builders Council, was just recently formed. And the last time he checked, it wasn’t even officially incorporated yet.

The reverend Carmen Hernandez, president of the New York City LGBT Chamber of Commerce, who spoke at the rally said she supports Christine Quinn, but urges Quinn and other Council Members to invite more of the Hispanic business community to the negotiating table.

“When they needed us we’re the first ones there to support them,” Hernandez said. “Now we’re asking them to come support us.”

It’s a lazy afternoon in Central Park. On the southern edge, there’s no sign of any unusual police buildup, and on the Great Lawn, baseball games are in progress.

Protesters from the march are beginning to fill in around the edges of the Great Lawn. A rally of some kind may be imminent.

Organizer Leslie Cagan tells the marchers, about half of whom have passed by Madison Square Garden, that if they go to Central Park they’re on their own.

While you’re waiting for news of something—anything—check out today’s original Voice videos, plus other recent ones, here.