Dinah Fried styles meals from fiction for her great photo series “Fictitious Dishes,” which explores foods from The Girl with the Dragon Tattoo, Catcher in the Rye, and other works. The food-blogger-fantasy perspective is fun (imagine little Oliver Twist, photographing his gruel in the natural light by the window). Indeed, if Moby-Dick‘s Ishmael was a food blogger, and the chowder chapter was his dispatch from Nantucket, this picture would be just right. Here’s a Melville excerpt because why not:

Oh, sweet friends! hearken to me. It was made of small juicy clams scarcely bigger than hazel nuts, mixed with pounded ship biscuit, and salted pork cut up into little flakes; the whole enriched with butter, and plentifully seasoned with pepper and salt. Our appetites being sharpened by the frosty voyage, and in particular Queequeg seeing his favourite fishing food before him, and the chowder being surpassingly excellent, we despatched it with great expedition: when leaning back a moment and bethinking me of Mrs. Hussey’s clam and cod announcement, I thought I would try a little experiment. Stepping to the kitchen door I uttered the word “cod” with great emphasis, and resumed my seat. In a few moments the savoury steam came forth again, but with a different flavor, and in good time a fine cod chowder was placed before us.

You’re likely already familiar with the work of photographer Christopher Boffoli, who sets little hand-painted figurines against landscapes of familiar foods for his “Big Appetites” series.

In his images, cucumbers, oranges and eggs become surreal factory lines, suburban lawns, or vacation spots, and people go about their daily business around them. Despite the immediate cuteness of the work, and the fun Boffoli admits to having while putting these images together, his approach is serious, and an attempt to comment on our frivolous consumption of food media. Speaking of which, have you seen this funny ad for a $300 portable immersion circulator?

Anyway, Boffoli has a show opening today at the Winston Wächter gallery.

That spot where the food and art worlds collide is a really odd place. And I find I’m always fascinated by food-related art projects, even when (especially when?) they’re over the top.

You might know Brooklyn-based New Zealander Henry Hargreaves from his previous projects, like the old-fashioned typeface he created out of streaky raw bacon, or the Chuck Close-inspired portraits cobbled together with shades of burnt toast. For his newest project, Deep Fried Gadgets, he collaborated with stylist Caitlin Levin, to present food porny pictures of battered and fried iPads and Game Boys. 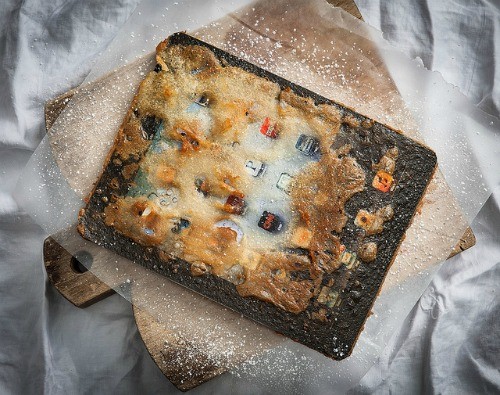 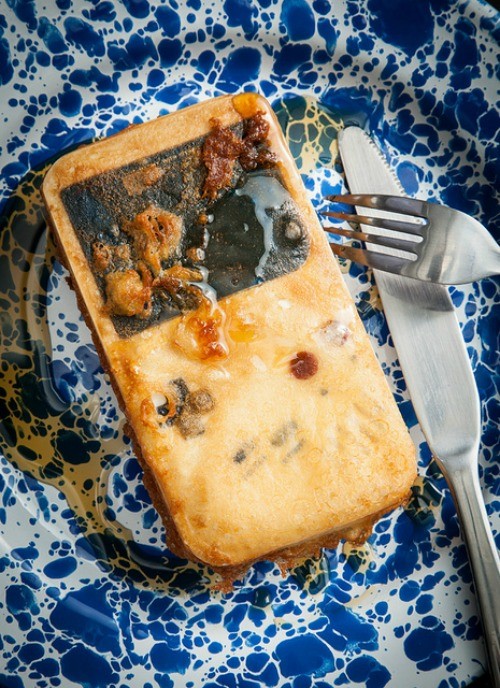 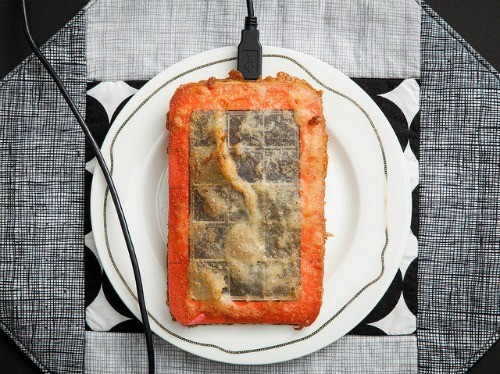 You can see more strange, deep-fried beauties over on Mirko Credito’s Flickr stream. The fried tech here is styled quite differently. The result is less food-porn, and more haunting (see above, the gun). Do explore Credito’s site, which has deep-fried Darth Vader masks, dolls, and robots. 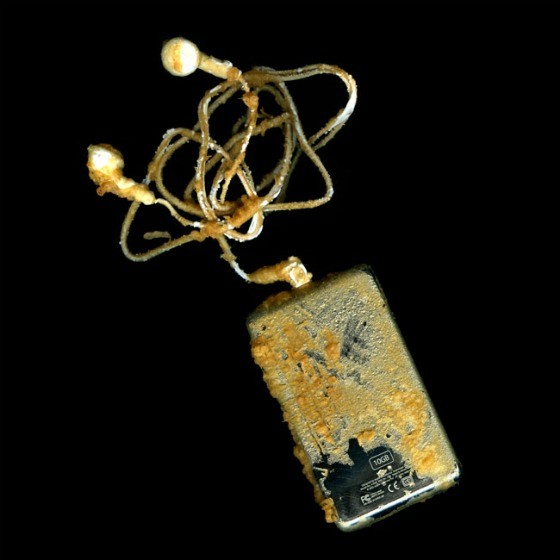 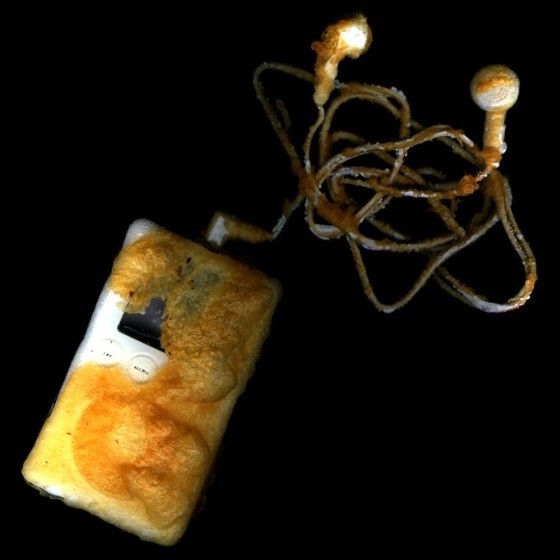 Artist Matthew Brandt will have his first solo show in New York starting tomorrow. Look for Taste Tests in Color, a series of multi-layered silkscreens made with edible inks of cotton candy, Kool-Aid, mouthwash, and pills.

Also keep an eye out for Honeybees, for which Brandt collected hundreds of dead and sick bees on the coast of California and photographed them using a nineteenth-century gum-bichromate printing process. Brandt’s show opens tomorrow and runs through July 20 at the Yossi Milo Gallery in Chelsea.

There are a lot of food events going on this weekend, but I picked up a quick breakfast around the Red Hook Ball Fields. Every year, vendors from El Salvador, Mexico, DR, Colombia and Guatemala sell out of trucks parked along the fields, where kids play soccer and families set up for the day to watch. You’ll find them here every weekend until October, 9 a.m. to 9 p.m., on the corner of Bay and Clinton Streets.

You might remember Swedish artists Carl Kleiner and Evalina Bratell from their work on the Ikea cookbook, Homemade Is Best, which turned every recipe’s ingredient list into an elaborate portrait. Their newest collaboration in Blend magazine also involves food and its geometry. (In cuter news, the couple is getting married later this year, and we bet the invitations are going to be really cool.) 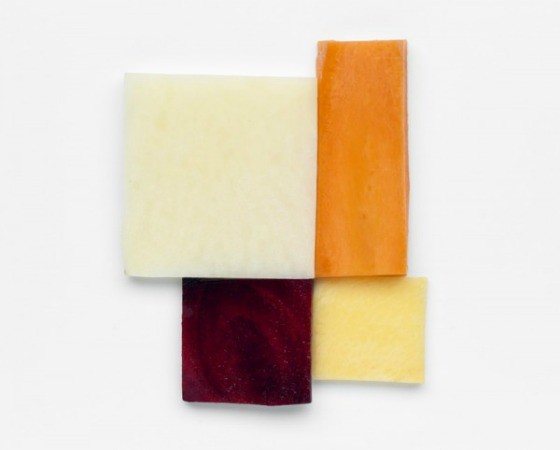 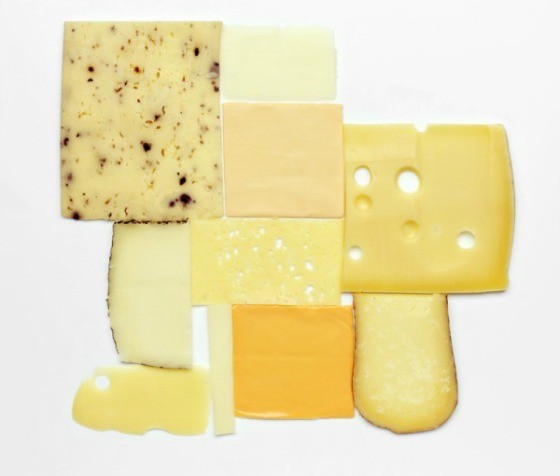 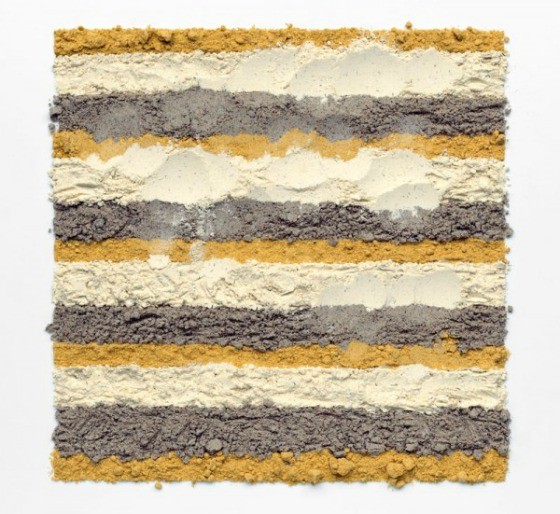 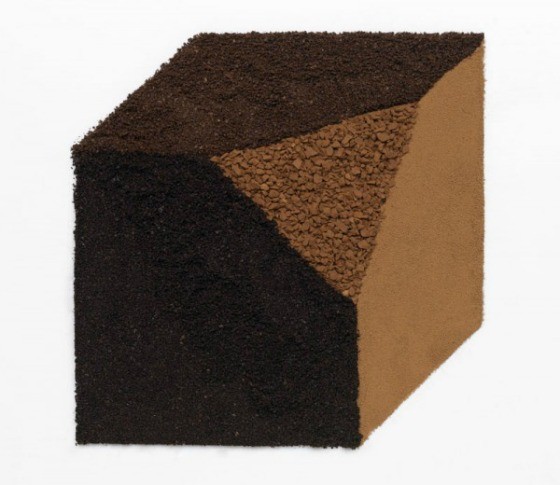 Remember Hangover Heaven, the mobile “clinic” treating hangovers in Vegas for $90 a pop? Let’s take a moment to admire the original hangover-cure pushers and street-meat vendors of London. The photos are by John Thomson, a Scottish photojournalist who paired with radical journalist Adolphe Smith to produce a monthly magazine covering London’s working class, Street Life in London. When their series was published as a book in 1877, it immediately became a bestseller. 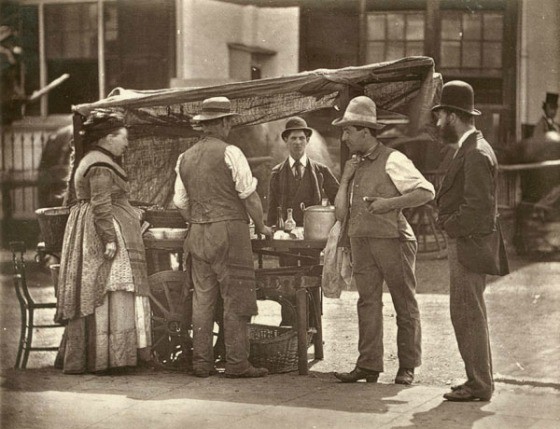 The Sellers of Shellfish

Fish on Fridays goes down with the Irish, and on Saturday nights we get often a better class of customers than on other days. The workmen and their wives and sweethearts are about then, and hardly know how to spend their money fast enough. After visiting the public-houses they finish up with a fish supper of the very finest sort. 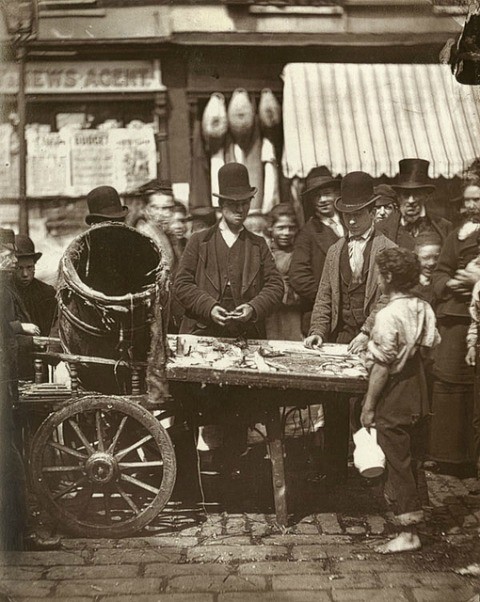 The Cheap Fish of St-Giles

Like the majority of his class, he does not always sell fish, but only when the wind is propitious and it can be bought cheaply. On the day when the photograph was taken, he had succeeded in buying a barrel of five hundred fresh herrings for twenty five shillings. Out of these he selected about two hundred of the largest fish, which he sold at a penny each, while he disposed of the smaller herrings at a halfpenny. 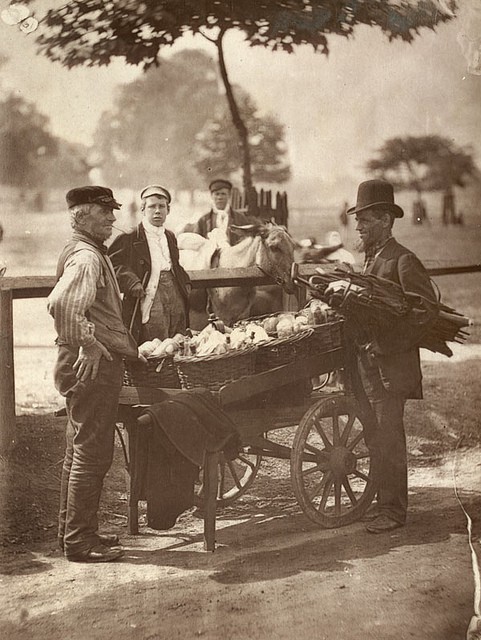 The enormous number of persons who have spent their Saturday evening and wages in getting lamentably drunk, come out in the morning with their throats parched and are glad of anything that will relieve the retributive thirst from which they suffer. Ginger-beer, under these circumstances, is particularly effective in restoring tone and mitigating the consequences of intemperance; and these are facts which readily account for the large sales effected on Sunday mornings.”