Maybe it’s because I’m paranoid by nature; maybe it’s because, now, the news cycle is never not stomach-churning. But when I see a celebrity’s name unexpectedly trending on social media, my first reaction is often to worry that something terrible has happened to them. (My second, lately, is to wonder if they’ve been outed as a monstrous sexual predator.) But early last Friday, when I woke up and first spotted Anthony Bourdain’s name on Twitter, the possibility — either possibility — didn’t remotely occur to me. The celebrity chef, writer, and Parts Unknown host always seemed more full of life than anyone I could imagine. Bourdain died by suicide in France, where he was shooting an episode of Parts Unknown. Even now, a week later, it’s difficult to believe. And it fucking sucks.

I lost most of that morning. In a haze of grief, I read his 1999 essay in the New Yorker (a hilarious, blistering piece that, among other things, warned of the dangers of ordering restaurant fish on Mondays), then the profile of the late chef published last year in the same magazine, then thumbed through my paperback copy of Kitchen Confidential, and then scrolled numbly through the remembrances that comprised most of my Twitter feed. It was comforting to see that I wasn’t the only one feeling like the wind had been knocked out of me, and doubly shocked that I was taking the loss of someone I’d never met as hard as I was. Bourdain’s bawdy wit, curiosity, and equal capacity for profound empathy and scathing cynicism made him a hero of mine — an all-time New Jersey great, a true pork roll, egg, and cheese of a man — as he was to so many others. He was, in my estimation, about the best possible representation of America abroad, especially in the Trump era; he was an outspoken advocate for the #MeToo movement. He was hungry in every sense of the word.

I thought throwing myself into work would make me feel better, but work didn’t want to cooperate: I had a meeting and an interview scheduled that day, but both, for unrelated reasons, needed to be moved. So I decided to eat my feelings instead. Before I left my apartment, on an impulse, I sent off the kind of tweet that I usually delete a few endless unfaved minutes after posting, which is to say that it expressed a genuine, difficult emotion and not just a joke about a squirrel I saw eating garbage: “I am sad, so I have decided not to do my work and instead to go outside and eat something I’ve never eaten before.”

I took the 7 train from Long Island City, where I live, to Jackson Heights. Actually, I accidentally took it one stop too far, to 82nd Street, and walked west down Roosevelt Avenue back to 74th Street. Almost in spite of myself, I felt my mood lightened by the sunshine, fresh air, and being surrounded by other human beings. I started to receive responses to my tweet, from fans of Bourdain’s pledging to do the same, to leave their culinary comfort zones and try something new. That helped, too. 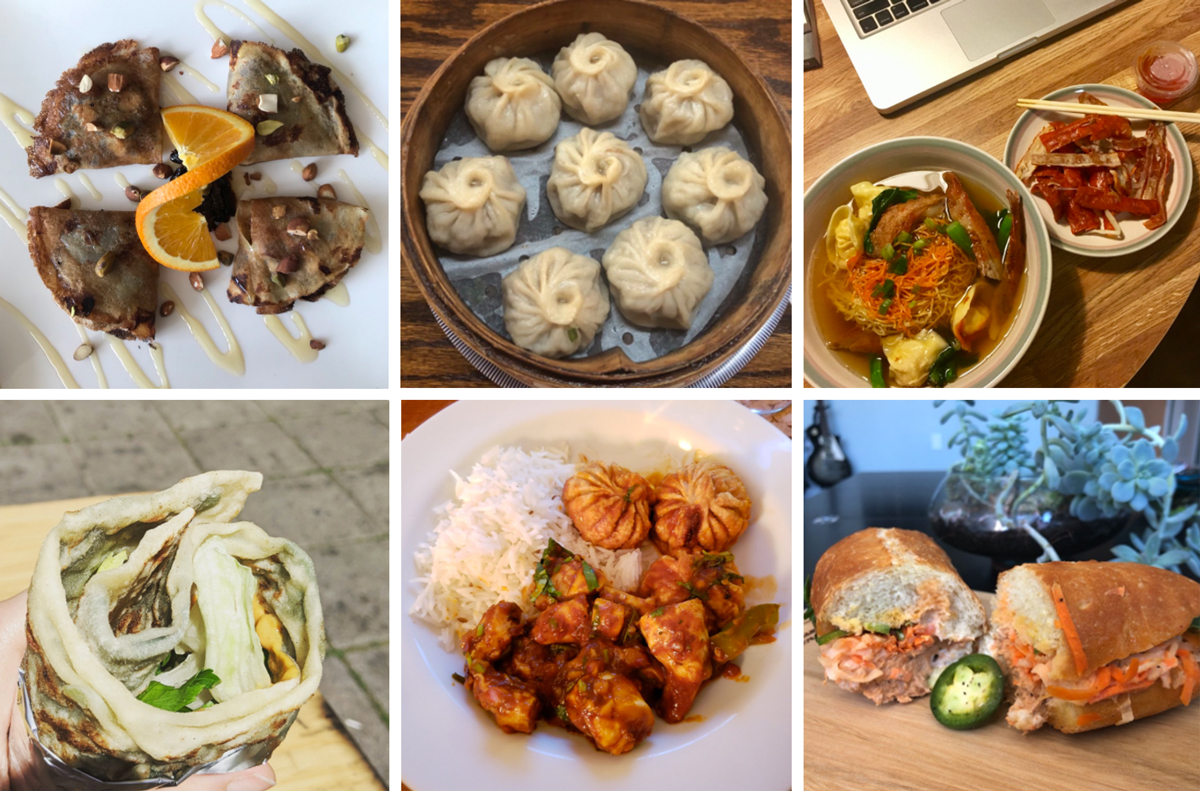 Lhasa Fast Food is hidden in the back of a cellphone store, past a jeweler and above a luggage shop. I felt hungry — suddenly, extremely hungry — for the first time that day when I wandered inside. Despite its unusual location, the tiny Tibetan restaurant is an increasingly less-hidden gem, having been warmly reviewed by the New York Times, Eater, and Bourdain himself. He dined there in the Queens episode of Parts Unknown. I’d come for the momos, Himalayan steamed dumplings, a dish I’ve wanted to try for years. I’d forgottten about Bourdain’s visit to Lhasa until my momo-related Googling led me directly to it — once I remembered, my lunch plans made themselves obvious.

Two oversize thermoses, one full of sweet tea and the other of salty butter tea, invite diners to pour their own cups for $1 each. A large portrait of the Dalai Lama, set before a snowy mountaintop, gazes down from above the register. From where I sat, I made direct eye contact with a photo of Bourdain with owner Sanggien Ben mounted on the wall. The pleasingly pleated beef momos (eight for $6) were delicious, and even more so when dipped in the black vinegar and fluorescent orange sepen, a truly spicy Tibetan hot sauce, available on every table.

I replied to my original tweet with a photo of the momos, and was pleasantly surprised to discover my mentions were full of reports of first-time eats from around the country and beyond, many with images. There was mofongo and pineapple cornbread, pork and preserved egg congee, tater tots with kalua pork, and a late-night expedition to Waffle House. There was spinach gözleme from a Turkish food stall in Germany, Yukgaejang in Massachusetts, grilled venison in Spain, and (apparently lackluster, but still) takoyaki in Manhattan’s Zuccotti Park. The rapper Heems, who dined with Bourdain on Parts Unknown, sent me a photo of a custom-ordered Swedish biryani. Sometimes, I learned, the results of this experiment were incredible. Sometimes, not so much (sorry, again, about the takoyaki). But there was a universal sense of pleasure in the exploration: The world felt smaller, and much larger, all at once.

I’m still sad. Maybe you are, too. But expanding your horizons and seeking out experiences different than those you’re accustomed to — and maybe patronizing a small, family-owned business while you’re at it, or having a conversation with someone you might otherwise never have encountered — is a fitting tribute to a man who encouraged us to do exactly that. So go get some momos.

If you or someone you love is in need of help, call the National Suicide Prevention Hotline at 1-800-273-8255. It is free, operates 24-7, and provides confidential support for people in crisis.