When I ask Natalia Sylvester why her family chose to immigrate from Lima, Peru, to Miami in 1988, the 34-year-old writer laughs. The reason, she says, “changes depending on who you ask in my family.” Sylvester was four years old when her mother and father (a medical administrator and a doctor, respectively) chose to leave with Natalia and her older sister. Her mother has always been vague about why they immigrated, suggesting, in some ways, a question that is impossible to answer.

This same silence would help to inspire Sylvester’s first novel, Chasing the Sun, which follows the disruption of one man’s unhappy marriage after his wife has been kidnapped and held for ransom. Sylvester’s own grandfather, a successful businessman, was kidnapped shortly before her family left for Miami, but she didn’t learn of the abduction until she was twelve years old. It was a jarring revelation for Sylvester, even though the rest of her family seemed to know. “Everyone I asked, like my mom and my dad, would say, ‘Oh yeah, we kind of talk about it, but not really.’ ” Chasing the Sun would go on to be named the Best Debut Book of 2014 by Latinidad, and would be chosen as Book of the Month by the National Latino Book Club.

Sylvester recently published her second novel, Everyone Knows You Go Home, which traces the trauma several generations of a Mexican American family face as they try to cross the border and settle into comfortable lives. When Martin and Isabel decide to get married on Día de los Muertos, Isabel knows his family history is fraught. But the appearance of Martin’s deceased father, Omar, and arrival of Martin’s teenage nephew from across the border help the family reconcile with their past. The premise, of a spirit helping to shed light on lost history, has been compared to that of Coco, but Sylvester’s work is less interested in revelations and happy endings. Her characters are marked by happenstance and ignorance, a testament to the devastating effects arbitrary laws can have on the lives of everyday people. The novel has been hailed as timely in the wake of increased anti-immigrant rhetoric, commentary Sylvester has explicitly rejected as well-intentioned but flattening. Like her parents’ reasons for immigrating, Everyone Knows You Go Home revels in uncertainty and refuses easy answers. 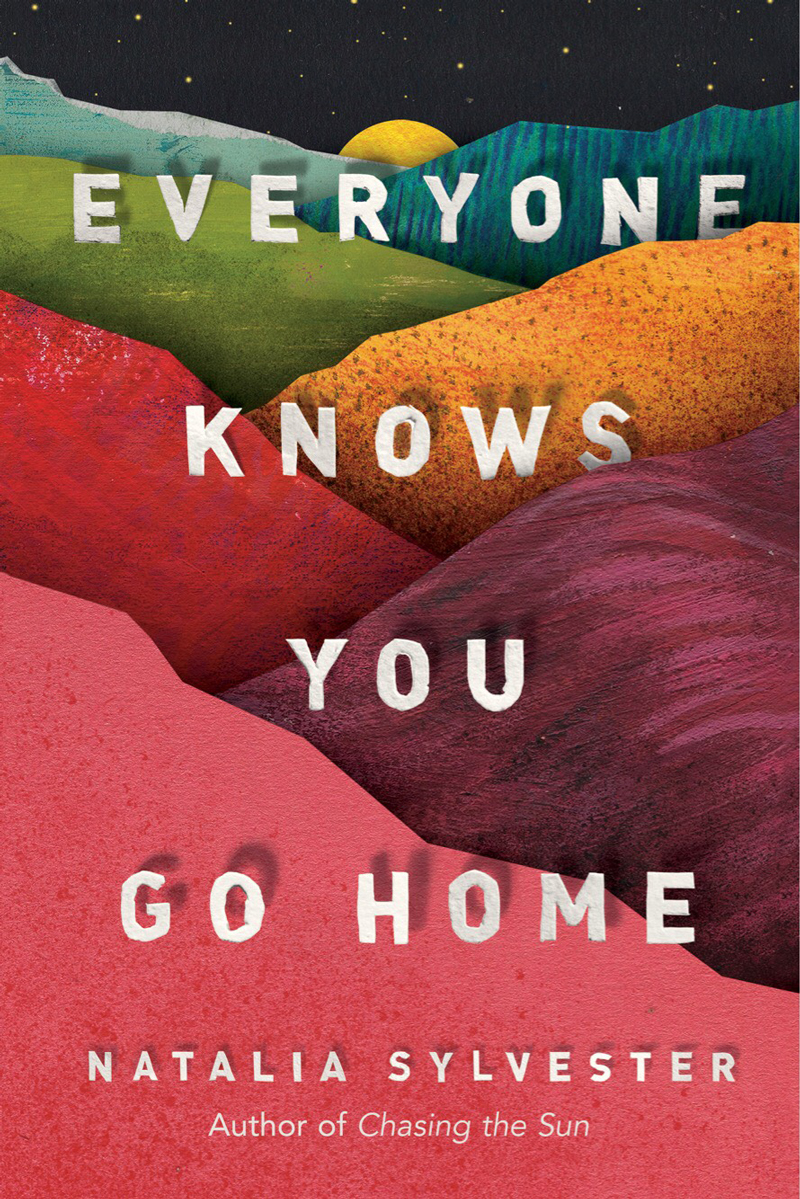 How would you classify Everyone Knows You Go Home? As I read it, I realized I had been thinking of it as a kind of ghost story/romance.

I don’t know that I was thinking about classification. I didn’t think of it as magical realism even though I feel it was very much influenced by magical realism. What people would term fantastical elements in this book is really an actual cultural tradition. It was a reflection of the way that your ancestors are always with you. That felt very natural to me. This is our truth in the real world, and maybe you can’t [illustrate] that when you only stick to what’s right in front of us. To me, that’s the point of fiction.

I did think of it as a love story, actually. You write to sort out your obsessions and maybe find answers to them. Looking back at my parents’ experience coming to the United States and everything they left behind, I always wondered, “How bad did things have to get in order for you to leave everything you know and love?” I ended up working that out through this love story between Omar and Elda [Martin’s mother].

Omar’s the catalyst for undoing so much shame in his family, but he’s also a ghost, so his ability to affect the story is limited. What does he symbolize in this narrative, and how did you craft his appearances?

I didn’t think of him so much as a ghost than as a spirit. In Western culture we often think of ghosts as associated with scary hauntings. It’s not in line with Día de los Muertos, or even how a lot of cultures similar to mine think of your dead. It’s not a terrifying thing. The fact that they’re with you can be very comforting.

There was a moment where I felt like Omar wasn’t doing enough, and I had to consciously push back against that. The way we teach craft in fiction is the idea that your protagonist has to be proactive. It’s often taught in this literal way that needs to be external as well as internal. Omar is the epitome of the internal force. It seemed like a very privileged way to teach craft, because not everyone in the world has the same amount of power [to act externally], but that doesn’t mean their story isn’t worth listening to.

If we decide to only tell the stories of those who have power, then what does that say about whose stories are being told? I had to embrace this idea that, though there’s not much he can do in this physical space, Omar is still a force. His story still matters.

I was struck by how these characters affect one another so far down the line. Did you always know these stories would be interconnected in this way?

I moved around so much when I was younger. This idea of “Where is home?” always stayed with me. I kept thinking about how, when you have an experience that deeply impacts you, a shared experience with others, then no one can take that away from you. How is that not a sense of home? I thought of migrants, the time and place they occupy as they’re together, which is this very in-between space, and everything they go through together. It’s something they would carry with them, always. It makes sense to me that they would go their separate ways in life, but at a root level still be intertwined.

Depending on your definition, the sacrifices made by Omar and Elda were either worth it or not. Not everyone gets a happily every after in America. Is the ending of the novel a triumph or something more complicated?

I think it’s more about never knowing if it was worth it. My parents were the same age that I am now when they left. It was unimaginable to me. It’s something I felt I couldn’t grasp, those sacrifices. These days, I’ve been feeling it in a much more concrete way because I ponder that. I ponder, sometimes sitting in my own home, looking around, “None of this can come with us.” Or thinking, “How quickly do you know when it’s time to go?” There’s a big history of people having to flee their countries when they were being persecuted and it’s sometimes very sudden. I used to contemplate those things from the hypothetical, but it’s becoming less so.

The other question that comes with that is, “With everything you gave up, was it worth it, if we’re ending up in the same place?” When I wrote my first book, I learned about the politics in the Eighties and the Nineties that led to my parents leaving Peru. Even at that time I thought, “This sounds familiar.” Now more than ever it is familiar. It’s really heartbreaking to see what we’re going through right now. Almost every immigrant family can tell you, “Yeah, we’ve seen this before,” because they fled similar regimes. And here we are again. Where do you go next from that? We don’t know if it was worth it.

I read your Writer Unboxed essay about people calling your novel political, or not political enough. How do you avoid the tokenization the publishing industry can sometimes foist on writers or color?

There were a few editors who said, “You know, I really love this, but we need to see less of the everyday things, it slows down the plot.” My agent asked, “What do you want to do about this? Tell me what you want to do.” I told her, “If this were a white man just writing about everyday experiences, it would be seen as talking about the human condition. No, I don’t want to revise it.” I didn’t want to take away the everyday joys and triumphs of these characters, and reduce them only to their suffering. She was 100 percent behind me on that. I think it’s important to find people who will hear you out and back you up.

To go back to the question, I try to embrace the ordinariness of my characters. You hear this narrative with immigrants sometimes. “Look at all these amazing accomplishments and contributions to U.S. society that immigrants have made.” The other extreme is, “Look at all these criminals.” What gets lost in the middle is the fact that the vast majority wants an ordinary life with access to food, love, and protection. If we can’t say that, then we’re not painting people as fully human.

That’s what’s so frustrating to me about the way we talk about the immigrant experience. The idea of what’s authentic is often just tied to how much they hurt. I didn’t want to write to that.

With this anti-immigrant administration, there’s so much talk about art saving us in this political climate, but you didn’t write this novel to teach anyone about immigrants. Who did you write this for?

When I look back on my childhood, what defined it was seeing my parents try to navigate this new life, and the immigration system imposed upon them, and the uncertainty that came with it. There was always this feeling that you have to do everything right, or else any small misstep could ruin everything. We’d get sent back. My parents tried to protect me from that, but I would see so much of that anxiety. This book became an act of witnessing all that.

I saw how unfair it was that there were others within my family and community who, as hard as we had it, weren’t as lucky. How is it that they didn’t have the same opportunities that we did? What was the difference between us? It was nothing. All chance, whatever it said on a piece of paper. Contrived things. I was trying to say, “I see this.”

Everyone Knows You Go Home has been out for a few months now. How has it been received? Were there any reactions that you were surprised by?

One of the most beautiful aspects of it has been having people share with me what meant the most to them. It’s always something different. It’s not just Latina immigrants. There is no such thing as “The Immigrant Experience,” and we tend to talk about it as if it’s a singular thing. But even within those experiences, the fact that we have all these commonalities is wonderful. It’s something that I was hoping to celebrate.

I had a friend once tell me, “When you think of your audience, don’t think of it in a marketing way. Think of it as who would you offer this as a gift to.” When we were younger, we all had books that felt like gifts the world was sending over to us at the right time. I just hope that it will find the people who will feel that way.