My phone rang on a hot morning in July a year ago and it as Allen Ginsberg.

“Do you know Herbert Huncke?” Ginsberg asked. “Have you ever met Huncke?” I said that I hadn’t.

“He’s the oldest living junkie in New York,” Ginsberg said, “and an old sidekick of Burroughs and Kerouac. He turned Burroughs on to junk and he’s waiting in line at Manhattan General to get in so he can cut down on his habit. He’s been waiting for four days and he thinks he can get in in about 20 minutes, and he needs his suitcase which is in his hotel room, so can you go up to the hospital and get his key, and go to the hotel and get his suitcase and take it to him? He’s wearing a white sweater. Hurry!”

I threw on some clothes and rushed to the subway, and in maybe 19 minutes was running down 21st Street to the back door of Manhattan General where the junkies wait in line to save their lives. Huncke met me in the middle of the block. His white cardigan sweater was unmistakable, but so was his face, which was fragile testimony to 30 years on heroin.

Huncke had decided to save Manhattan General for another day, but he insisted on showing me the junkie’s lobby. The floor behind the door was strewn with cigarette butts, and the air was a dense fog. They leaned against the wall — men, women, white, Puerto Rican, black — and sat on the benches. All the openings, the sign-in windows and such, were caged. It was as hard to get in as it was to get out.

And then as we walked over to Ginsberg’s, Huncke began to rap. Huncke raps beautifully, the sound of his magnificent voice — all that seems intact in his devastated body — as tantalizing as the content. He has so much to rap about, the days with Burroughs, the trials and woes of Ginsberg, the gilded gossip about the beats a decade ago and last week. It is all that he has, his memories and a talent for recalling them. It is not quite enough, but he gets by.

When he arrived, Ginsberg took me aside. “Whatever you do,” he said sternly, “don’t give him money! I’m not kidding. Be careful. He’s very persuasive.”

And then he took Huncke aside, and asked him to spare me his touch. “He’s just a kid,” he said, “and he doesn’t have very much money.” And then Huncke hit Ginsberg for ten bucks.

Huncke is a master of the touch. It’s his livelihood, and as I walked with him back to the West Side I braced myself to follow Ginsberg’s orders and resist the inevitable climax of the conversation. It never came. Huncke spared me the first time — it would be the last — waved good-bye, and promised to stop by and visit.

And he did stop by, roughly once a week at a punctual nine o’clock in the morning, at an old loft I had on Prince Street that summer. I would try to wake up and make some coffee and we would sit and talk for three hours or so, the same glorious rap, and then he would hit me for $5 or so, always, he said, for a hotel or some other non-narcotic necessity of life. And I would give it to him, because he had earned it.

Toward the end of summer he passed a bad check on me and disappeared. I was sad that he never came back, and, in lieu of an autograph, pasted the check, which he had endorsed in various styles of script, on the title page of his “Journals,” a rambling collection of recollections that had been published by the Poet’s Press. A little while later I heard he was in jail.

After he had finished six months in jail, he drove to San Francisco with a friend. I suspected that he was intrigued by the talk about a “Love Community” in Haight-Ashbury and the Diggers’ free money.

He liked the city, but was disappointed by the people, and a few weeks ago he was back in New York, but he didn’t get much of a homecoming. Ginsberg was in Italy and Panna Grady, a long-time patron, was in London and Peter Orlovsky was in a surly mood. He had spent the money Ginsberg had left to get him to London, and again, the line at Manhattan General proved to be too long for his patience. He stooped to selling salt pills as Owsley acid. And all the people he supposedly burned were rumored to be waiting for his upcoming reading at St. Mark’s-in-the-Bouwerie. It seemed that, for once, the audience would be taking the collection. But, deft as ever, Huncke survived the reading and went off to rap with Neal Cassady.

The other day he came by to visit again, and we sat in a bar on Seventh Avenue and talked. Huncke had a coke — he is repulsed by liquor — and I asked him to recall again how he came to meet William Burroughs.

“I met Bill in 1944,” he said. “I had just come back from a trip to South America. Bill had met a friend of mine from Cleveland, a guy like something from a Humphrey Bogart movie, with padded shoulders, a felt hat and a flashy tie. He had a job as a soda jerk around Columbia. I think his intention was to case the neighborhood. And Burroughs approached him and asked if he could get rid of a sawed-off shotgun. Burroughs always had a sort of interest in the underworld. So this friend brought Burroughs down to my apartment, with the gun and several gross of morphine Syrettes. When I first saw Burroughs I thought he was a Treasury agent.

“He thought he’d like to try the morphine just once. We turned him on. He was a natural. The next thing we knew he joined forces with us.”

Burroughs was then at Columbia where he had, Huncke recalled, “a coterie which included Kerouac and Allen, who idolized him, and myself. I was sort of introduced as an oddity that should be observed.

“At this same time, the Kinsey report was taking shape. I had met Dr. Kinsey in Times Square, and I introduced him to Allen and others. We used to get together in the Angler Bar, which was off 42nd Street. We’d sit there and talk and eat and drink. Bill was interested in karate. One of the most interesting things I ever witnessed was Bill trying to give a knockout blow with three fingers to break up a fight. He had gathered his coat around him elegantly, with all the dignity and reserved demeanor he had, and he was trying to reach over the heads in the brawl to hit the guy.”

In 1947, Huncke and Burroughs went to Texas. “It was a beautiful year,” Huncke said. “Just Bill, myself, his wife, and young Bill was born in July. We lived in a little weatherbeaten cabin on the edge of the bayou, and we raised a crop of pot. We were going to try to raise oriental poppies in a hothouse.

“Bill had his pistols and did target practice. He used to stand out there and draw with his pistols strapped to his side and shoot at the barn. Then Neal Cassady and Allen drove down from San Francisco. Neal and Bill and I drove back to New York in a jeep with the pot, and Allen took the train.

“I didn’t see too much of Burroughs after that. Then Bill went to Tangiers, and I just hung around, hooked all the time, using junk, junk, junk. I’ve been using junk for more than 30 years. I can’t write without it. I can’t live without it.”

He can’t live without it. Herbert Huncke, apostle of junk, immortalized in more than one Kerouac novel, eulogized in Ginsberg’s ravings, godfather to “Naked Lunch.” As he fumbled for a match in the bar on Seventh Avenue, I could see that it was time for him to go again in search of that small bag that holds his bones together.

I gave him the money to buy it, and I hoped that he would find it. ❖ 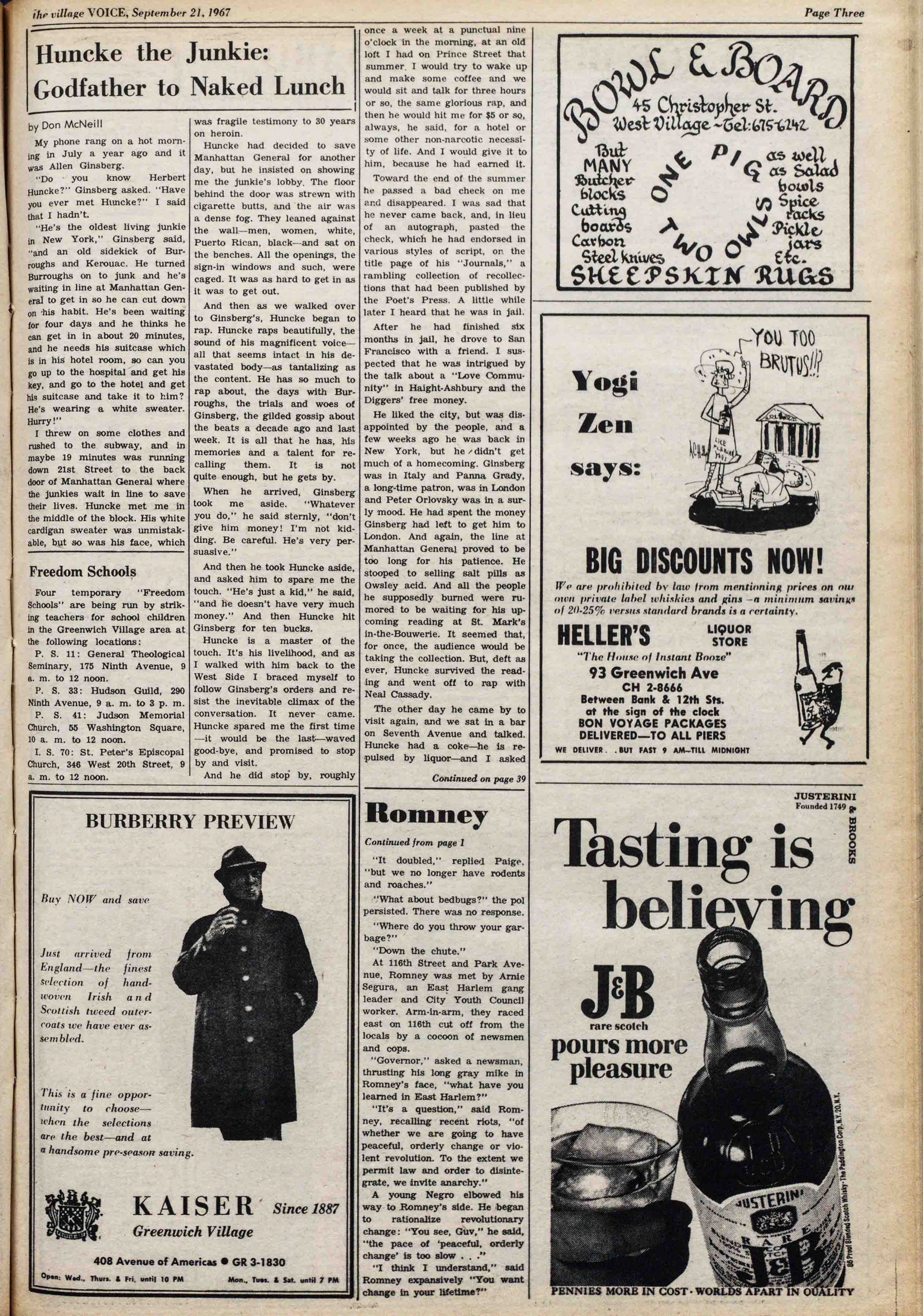 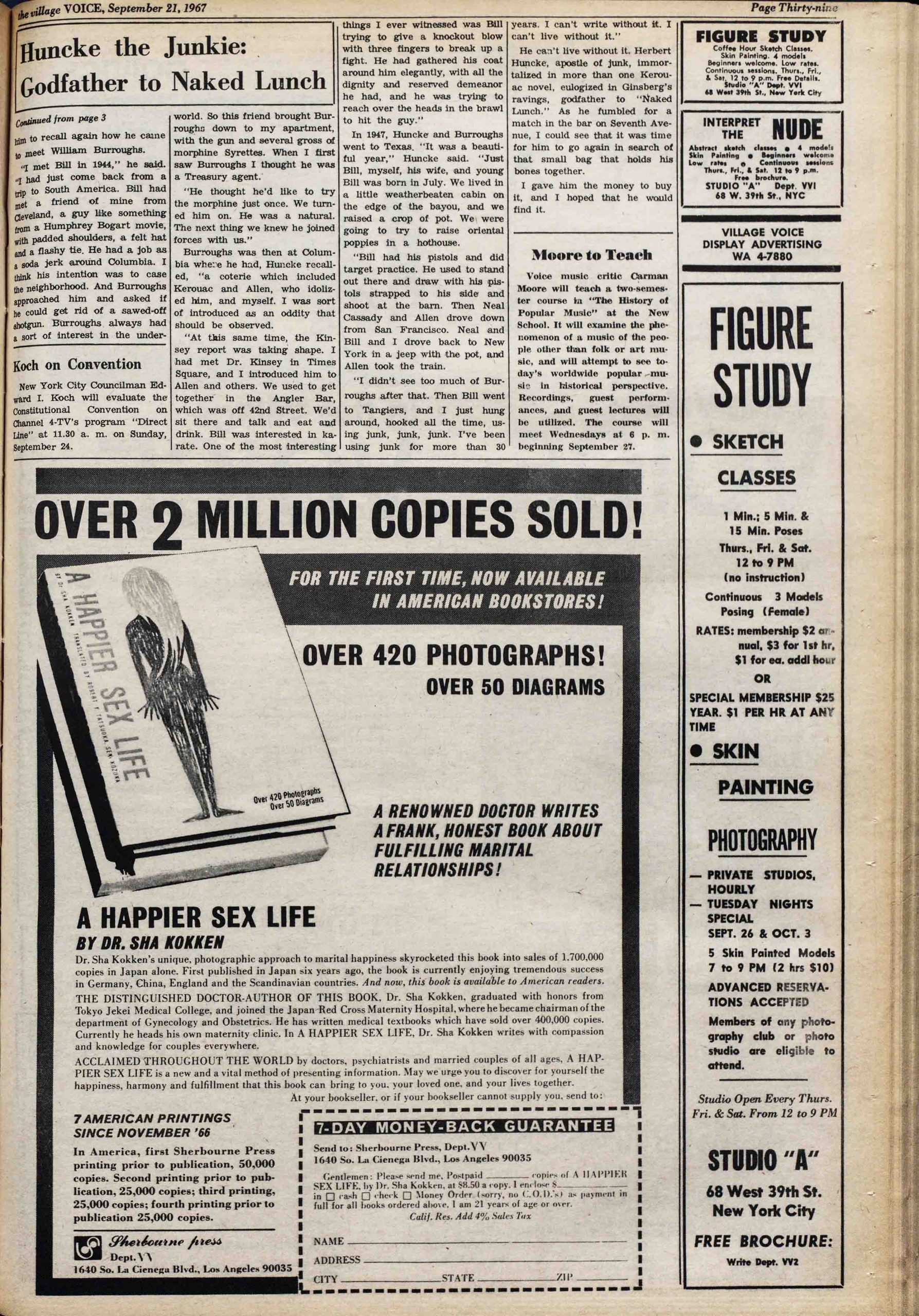 Chlorine begins, perhaps a bit pompously, with a quote from William S. Burroughs — though the only affinity the film shares with the author of Naked Lunch is a haphazard approach to structure.

While the effect was probably not deliberate, Jay Alaimo’s tiresome dramatic comedy often seems as if it were assembled using the cut-up technique favored by Burroughs and his beat contemporaries, in which clichés are thrown together and arbitrarily rearranged.

The premise alone suggests the extent of the screenplay’s unoriginality: Roger Lent (Vincent D’Onofrio), an ineffectual banker long resigned to middle-class complacency, finds himself embroiled in an investment scam orchestrated by an unscrupulous colleague, who in fact conspires to fleece the community.

Well, the ubiquity of greed may be a timeless theme, but hasn’t the novelty of the Ponzi scheme been exhausted? Alaimo seems to have an unusually high tolerance for shopworn ideas, and Chlorine boasts no shortage of them: Roger’s frumpy teenage daughter endures her first period in the style of an after-school special; his wife aspires to fit in with high society and makes a desperate show of embellishing her status; and his fashionably angst-ridden son, channeling Paul Dano in Little Miss Sunshine, reads Sun Tzu as he cultivates a budding anarchism. They exhibit not a glimmer of imagination or original thought among them.