Usually, regardless of the New York City borough, you’re no more than five minutes from three sure things: a turkey sandwich on a roll, a can of soda, and a 1.75-ounce bag of Doritos. It’s a Gotham guarantee, even more reliable in its ubiquity than a Starbucks latte or the immortal bacon, egg, and cheese breakfast sandwich.

In last Monday’s New York Post, Josh Kosman reported that the unmistakable crinkly-shiny bags of Frito-Lay products were conspicuously absent from many small grocery stores, newsstands, and bodegas around New York City. Kosman suggested that salary cutbacks affecting the company’s drivers had led to a workforce exodus that, in turn, left our salty-tooth dollars to be spent on other things. Smartfood? Utz? Kettle chips with Himalayan salt and avocado oil? Maybe as a stopgap, but — sensible eaters, close your eyes for this next part — there’s really no long-term replacement for the sacred nacho-cheese Doritos. (In last year’s award-winning Lady Bird, Tracy Letts immortalized the snack with an enunciation of “Doritos” that will not be bested in our lifetimes.) Whether they come in a tiny 1-ounce bag for box lunches, a multipurpose 1.75-ounce or 3.125-ounce bag, or the full-size 15-ounce bag for long car rides or lonely nights spent with a six-pack of Lagunitas Maximus IPA and a pint of AmeriCone Dream (what, just me?), there’s a bag size for every occasion.

PepsiCo, which owns Frito-Lay, makes for a good scapegoat. The company has been struggling in vain to entice investors after flat year-on-year stock performance and exactly-as-expected dividend payouts, and the resulting financial difficulties have trickled down to affect drivers. The company laid off nearly 1 percent of its 110,000 employees last month at the same time it announced a round of thousand-dollar bonuses to other employees. Also, perhaps inspired by new tax breaks, the company’s already long-gestating stock repurchase plan swelled from $12 billion to $15 billion. Yet these moves haven’t translated into tangible results, besides some curiously blank shelf space at your corner bodega.

“That’s happening everywhere, man,” Rob, a delivery driver for a competing beverage distributor, told me as he stocked shelves at a convenience store in Queens. Rob and his partner, Darren, pick up their load in downtown Brooklyn and at the Port Authority piers and make drops around central Queens: Corona, Elmhurst, Maspeth, and Jackson Heights. Their workday officially begins when they start hauling at five in the morning, and ends around two in the afternoon. But when you factor in their commutes, from East New York and Far Rockaway, respectively, their day is much longer than that.

Rob gave me some figures of how a typical driver cobbles together a paycheck: a base salary plus a few pennies for every case delivered. Other drivers I talked to, like Marce in Kew Gardens, who delivers produce for an outfit much smaller than PepsiCo, build their paychecks by relying on overtime earned from sixty- to seventy-hour weeks. In the case of these two guys, dedicated sales teams pre-canvass stores, usually by phone or email, to get a fulfillment agreement. Stores have the privilege of changing their mind at the point of delivery, if the product hasn’t moved fast enough, or if they don’t have enough space.

The chance of canceled orders is something drivers have always had to expect. But, Ron explained, the distributor he works for recently implemented a new commission structure where it takes back almost half of what the drivers earn for each cardboard box unpacked and shelved — a clean doubling of the 22 percent clawback when he signed on. Competition for space in even the most remote drugstores and supermarkets is legendarily cutthroat, even while marketers and manufacturers wage a billion-dollar commerce war across continents. But on the micro level, drivers might correctly feel that they’re the very sandpaper companies use to unstick any irksome nickels and dimes not already being siphoned into deeper pockets upstairs.

At the tactical level, however, delivery drivers may have a clearer big-picture view than executives and company officers. Two PepsiCo drivers — both of whom spoke freely and enthusiastically on the condition of anonymity — confirmed several points outlined in Kosman’s article relating to small operations (newsstands and bodegas) being neglected in many neighborhoods around town. This was the case even after the company rallied to get nonregular drivers, such as managers and dispatchers, to cover blind spots caused when as many as 45 out of 140 fleet drivers quit as a result of the new salary structure.

What was the flash point? The two PepsiCo drivers said it was an abhorrent new contract signed last summer, which both men told me their union did nothing to alleviate or avert. Where pay had previously been a 30 percent salary–70 percent commission split, incentivizing drivers on two fronts (land new accounts, take good care of existing ones), as of July 2017, the split reversed to 80-20 in favor of salary, with new, more difficult metrics required to earn commissions. (Teamsters Local 802, which negotiated the contract, did not respond to a request for comment by publication time.) Not exactly the principle the early-twentieth-century sociologist Vilfredo Pareto had in mind when he created the 80-20 rule.

Both of the PepsiCo haulers I talked to told me that the new model no longer encourages outreach to the city’s smaller operators. Consequently, many owners of small stores and kiosks have found themselves compelled to make cold approaches to drivers, and to offer cash for a box or two of what may be the best-selling snacks and drinks in their inventory.

“Our hands are tied,” one driver said. “Guys who own bodegas might come up to my truck and offer me twenty dollars, thirty dollars for a few boxes of chips, but I can do nothing. It’s not in the system, so when they scan everything back at the base, it looks like theft, and then I get in trouble. I could lose my job.” He explained that it wasn’t so long ago when he would have taken the time to sign up a new account, or restore one that got left behind. But now, it wasn’t worth the effort.

In the end, massive driver attrition is a punishment that keeps on punishing: Somewhere between the transmission-grinding gearshift from 30-70 to 80-20 in the drivers’ salary-commission model, those who remain with PepsiCo have seen their incentives torched. Metro area Duane Reades and Rite Aids may never notice a Frito hiccup (they’re not the clients you want to leave high and dry), but many smaller sellers like the all-night store outside your subway station or the news and sundries kiosk in your midtown high-rise office building might have just been wiped from the margins.

Or if the math is too granular, consider the driver exodus ratio in these terms: You have just opened a large bag of Doritos. I walk over and, with one swipe of my right hand (which, believe me, is a veteran chip scooper-upper), abscond with one-third of the bag’s contents, and vanish. Now imagine that happening to a city of 8 million.

The cheaper of the two is the one to get.

In an amazing act of cross-branding, Taco Bell has painted its hard taco shell bright orange with a chemical-tasting spice mixture — and called it a Doritos. Or maybe what’s amazing is that they didn’t think of it before — from 1978 to 1997, PepsiCo (the corporate parent of Frito-Lay) owned Taco Bell, and several other fast-food franchises, as well. 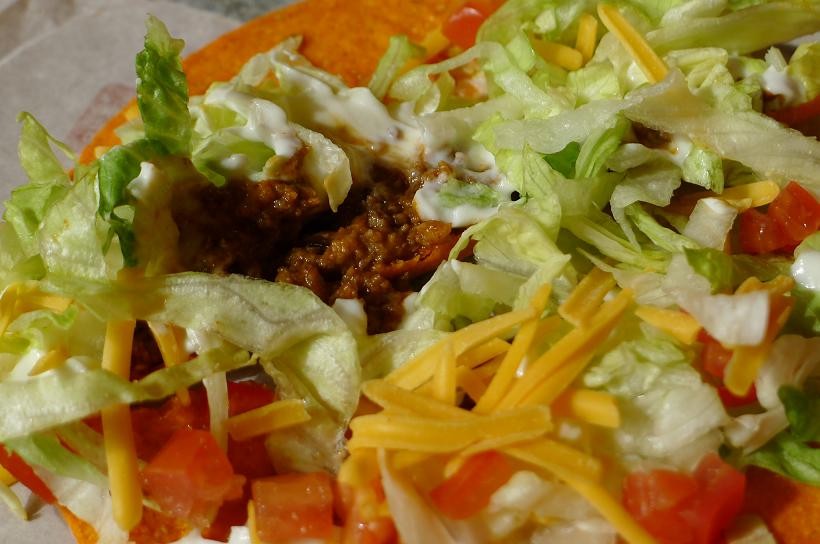 In the more expensive version, the tomatoes are a nice addition, but the taste and texture of the crema is terrible.

Doritos are a product of the Frito-Lay division of PepsiCo. The salty snack was invented sometime in the 1960s, a thin triangular corn chip fried to crispness. The product is reminiscent of the tortilla chips used to dip guacamole, which also underpin nachos and are stirred with salsa to make chilaquiles.

My father, Jacob Sietsema, had an important hand in inventing some of the earliest Doritos flavors, including Nacho Cheese, which is the one being used in the Taco Bell taco shell. Of the original Doritos, he once told me, “Doritos were invented for Northerners. The Frito-Lay company’s most important product at the time was Fritos, a corn chip with a very strong flavor. The company reasoned that consumers up north preferred something more bland and mild.”

So it was with a strong sense of the Doritos’ history that I bought my first Taco Bell Doritos taco, which sports the slogan, “My taco is a Doritos.” Actually I bought two: a pared-down version containing only spiced ground beef, iceberg lettuce, and curls of yellow cheese ($1.29), and a more opulent rendition that adds crema and chopped tomatoes ($1.69). 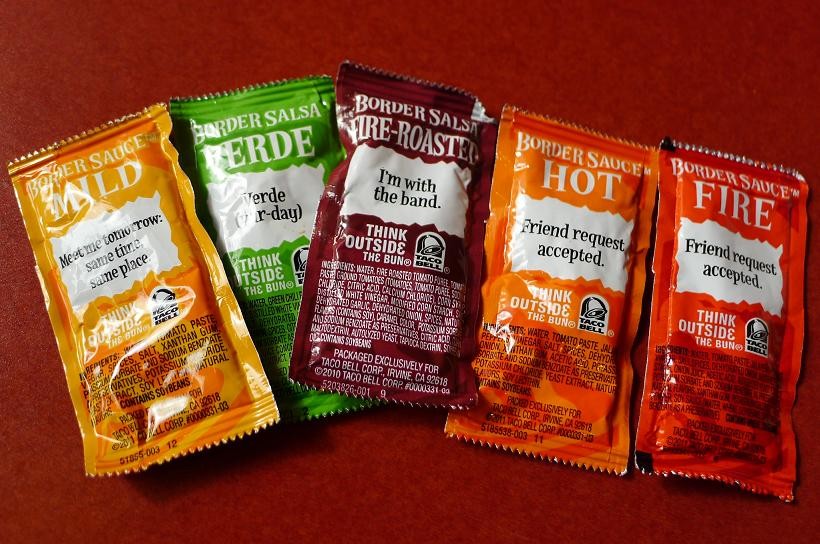 Grab a handful — you’re going to need ’em. (Too bad they come in these ridiculous and wasteful tiny individual packets.)

The tacos come in a special cardboard sleeve emblazoned with the Doritos logo that aids in keeping the shell intact until you’re ready to eat it. The taco shell was of the usual dimensions, but a rather alarming shade of orange. While I was skeptical that the shell could actually “be” a Doritos in the existential sense of being exactly the same thing, it turned out that yes, the shell is a Doritos.

While I’m not fond of eating Doritos on their own, in the context of the unspeakably bland Taco Bell taco the extra flavor kick of the snack chip was entirely welcome. Yes, believe it or not, I actually liked the taco representing the cheaper of the two price options.

I didn’t like the more expensive Taco Supreme version. The crema, which the website describes as “cool reduced fat sour cream,” has a texture and flavor somewhere between face cream and Elmer’s Glue. The tomatoes are welcome, though they may have been gassed to produce such a vivid red color.

So, when I’m sure no one is looking, I’m sneaking back into the Union Square Taco Bell and getting a couple of those $1.29 Taco Bell Doritos tacos. 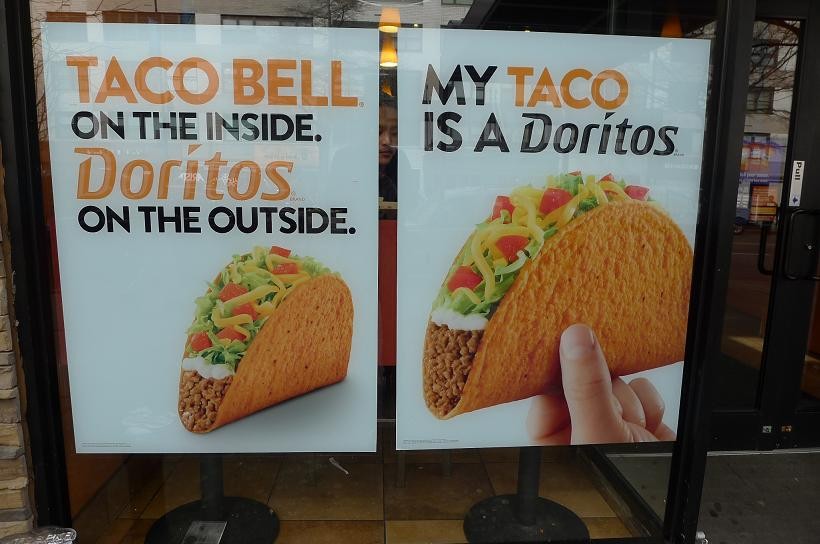 Gee, this picture makes it look awfully big. Hand model must have a very small hand, or … Photoshopped?