If Donald Trump has his way, the Kremlin towers will soon have a new neighbor. Trump Towers, just beside Red Square.

The Donald’s mouth has often been bigger than his bank account. But if Russian news re­ports are on the money, Trump’s first foreign real estate ventures includes plans to renovate the Hotel Moskva, a landmark-turned-to-seed Stalinist structure off one of the most famous squares in the world. A Trump team was in Moscow months ago to assess the venture. A top Moscow city gov­ernment official told Moscow News that the hotel deal was just about complete.

For now, Trump is being unusually — ­though self-servingly — silent about the deal. However, his spokeswoman did not deny it. “It’s too soon to talk about it,” said Norma Foerderer, Trump’s long-term spokeswoman.

Moscow’s first vice premier, Vladimir Resin, told the Russian news agency Interfax that Trump and the Moscow city government had “practically reached agreement” on the deal. Moscow News described the hotel deal as com­plete. Trump will apparently renovate the hotel and turn the top floor into luxury apartments. Russians, the newspaper proudly reported, will be hired to carry out the reconstruction, “excluding the finishing touches.”

If Trump does jump into the Moscow real estate frenzy, he and his deal would make Lenin, still mummified, submerged in glass and on dis­play inside the square, rise with rage. Trump, who in some ways became a symbol for 1980s greed and American expansionism, would enter the post-Communist real estate market as anti-American sentiment in Russia is on the rise. Trump visited Moscow last November, the same month a pioneering American cowboy capitalist, Paul Tamm, was gunned down out­side the luxury Radisson-Slavyanskaya Hotel, which he helped create — and where President Clinton used to stay.

In Moscow, Trump would become just one of many brash entrepreneurs in a country where the lines between government, gangsters, and business are inextricably linked. Trump may also finally meet his real estate match: the noto­rious Moscow mayor-mogul, Yuri Luzhkov.

The Trump team sent to Moscow formally assessed the cost of fixing up the decrepit Hotel Moskva, an imposing gray and gloomy building. Trump has been negotiating with Brooke Group Ltd., a Miami-based holding company that owns Liggett Group Inc., of L&M, Lark, Eve, and Chesterfield cigarette fame. Nicotine is big business in Russia, and such brands are giving Philip Morris hefty competition.

If Trump succeeds, he will be biting into a solid chunk of Soviet history. Hotel Moskva’s lopsided towers are a tribute to Stalin’s totali­tarianism. When the architect showed Stalin two different plans, legend has it, the dictator approved both. Terrified to displease him, the architect complied; hence the hotel’s asymmet­rical design.

Russian newspapers have reported Tsar Trump’s deal as clinched. The renovation is expected to take 18 months to complete.

In the early 1990s, as Communism was collapsing, the Hotel Moskva was one of the most popular expatriate hangouts in town. It boasted one of Moscow’s only non-Soviet restaurants, known as the Spanish bar, where spies, business-people, reporters, and other unsavory types used to gather for sangria, garlic trout, imported chorizo, and special-order paella. Patrons were (willingly or otherwise) serenaded by guitar-playing gypsies and Cubans who came to Russia as students and stayed. ❖ 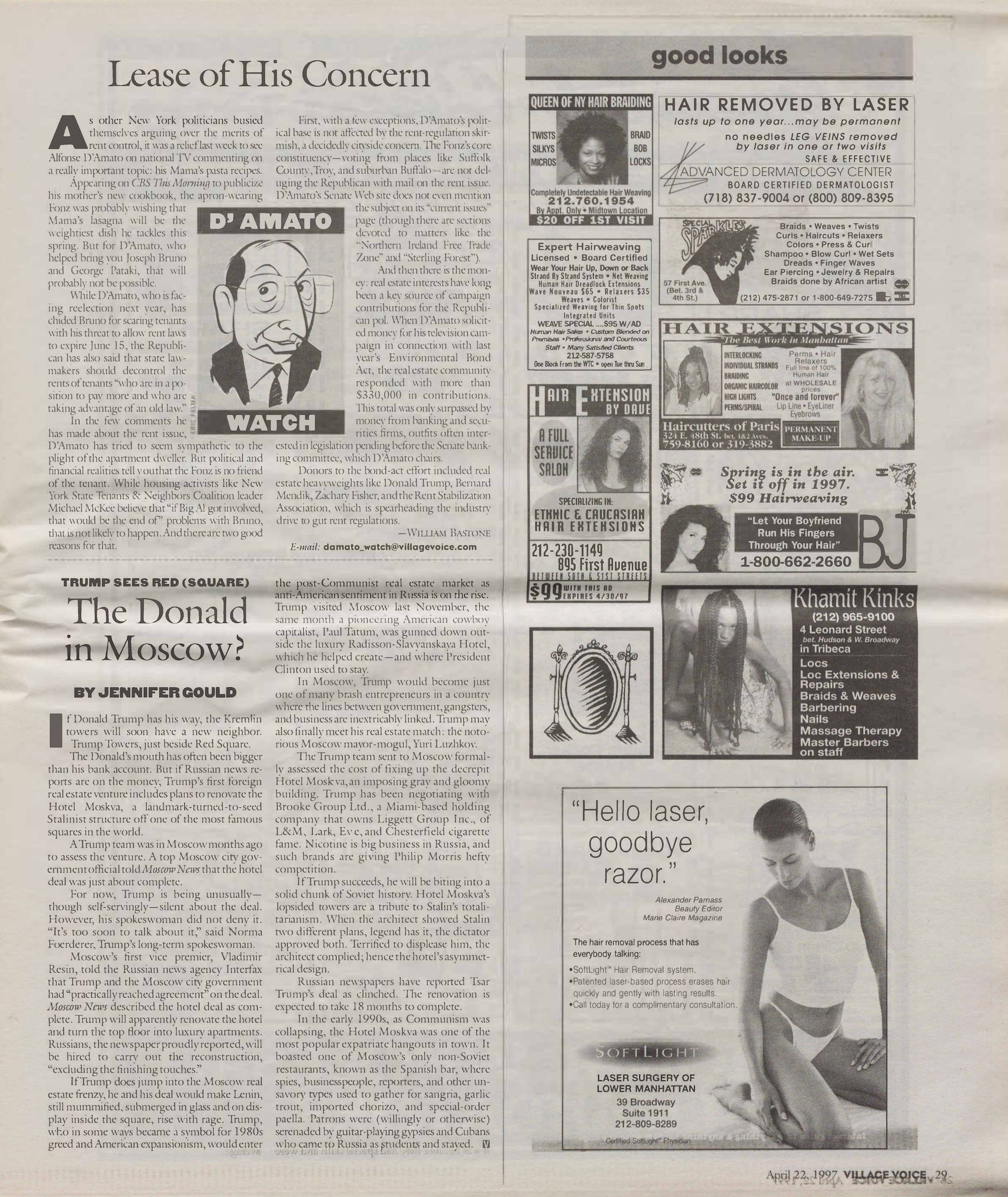 This sets up an aura of refinement that runs throughout the film: Souliman is the right-hand man to protagonist Viktor (Depardieu, as of recently a Russian citizen), whose just-completed seven-year prison term was awarded for the relatively elegant charge of art-thievery. Moreover, the movie’s underworld figures are less concerned with drugs than with peddling diamonds. But make no mistake: Once Viktor gets wind of his son’s recent murder, his sense of culture doesn’t mean he’s against a surge of violence.

A typical example: Before tearing chunks of skin out of the thigh of a corrupt Italian lawyer (Marcello Mazzarella), he enjoys a steak and a glass of red wine in his victim’s company. Many scenes go like this, with Viktor pushing people — his late son’s pregnant girlfriend (Polina Kuzminskaya), a ruthless diamond kingpin (Denis Karasev) — just far enough that they give him the next name or clue he needs to understand his son’s death. Alongside Souliman, Viktor’s chief partner in crime is nightclub owner Alexandra Ivanov (played with extra glamour by Elizabeth Hurley).

As Viktor, Depardieu — whose default expression these days is pissed-off — plows through enemies in a cakewalk; from the first glimpse of him, a low-angle shot of Viktor standing on a luxury boat, he’s a force that can’t be stopped. But aside from some inspired uses of chiaroscuro lighting, the movie around Depardieu is mostly derivative, its membership in the post-Taken lineage confirmed when Viktor murmurs into the phone, “I just wanted you to hear the voice of the man who’s going to kill you.”

Dancers do more at Moscow’s 238-year-old Bolshoi Ballet than throw acid at the boss and sleep with wealthy patrons. They rehearse and perform the warhorses of the classical canon, and they’re coming to town with three ballets, an opera and a full orchestra. The dancing kicks off with Swan Lake tonight, followed by Don Quixote on July 22 and winds up with Spartacus, Yuri Grigorovich’s Soviet-era, point-shoe-free celebration of the venerable troupe’s male dancers to music by Aram Khachaturyan (July 25-27). Tickets are scarce (and expensive) but don’t lose hope: These are summer days and people who bought the ducats back in March may be trying to unload them in the usual places.

Ukrainian-born artist Ilya Kabakov’s 2008 multi-site Moscow retrospective is the departure point of Ilya and Emilia Kabakov: ENTER HERE, itself a look back at the husband-and-wife team whose surreal, mimetic installations reinvented the landscape of Soviet and post-Soviet art.

Director Amei Wallach re-teamed with editor-cinematographer Ken Kobland (the pair’s last collaboration was Louise Bourgeois: The Spider, the Mistress, and the Tangerine, 2008) to follow the Kabakovs, who fled the Soviet Union in 1987, back to Russia.

The couple has lived in the United States for the last 25 years, though Ilya appears most comfortable speaking German — anything, it seems, but Russian. Kabakov, now 80, plans, paints, and oversees the reconstruction of his 1992 installation The Toilet — a domestic interior within the façade of a public restroom — pausing to describe his “mechanical kind of life” in a post-Stalin USSR.

“He was silent for 55 years of his life,” Emilia says. Wallach de-emphasizes Emilia’s contribution; credited as “the Collaborator,” her role appears more practical than creative. No longer silent but still the lesser talker between them, Ilya is marvelously fluent in spatial forms: The climax of ENTER HERE finds an old Moscow garage transformed into a maze-like reckoning space, history and art made inextricable.

It was just last February when the Russian feminist punk collective Pussy Riot performed their “Punk Prayer” at a Moscow cathedral asking for the Virgin Mary to “banish” Vladimir Putin. For their actions, three of the five women who performed that day were sentenced to two years in a prison camp. However, one of the bandmates was released this October after it was decided she played too small a role to serve the full sentence. She has since reported that in the camp there is no hot water, warm clothes, or access to adequate medicine and medical care. To raise money for the group, the Feminist Press has published an e-book, Pussy Riot!: A Punk Prayer for Freedom. Tonight,
Eileen Myles, Laurie Weeks, Barbara Browning, Vivien Goldman, Johanna Fateman, and Justin Vivian Bond will read excerpts from their contributions to the book.

Billed as “the first and only Russian film that poked sharp satire at the current Russian political system and the virtuality of its leaders,” director Victor Ginzburg’s Generation P gives phantasmagoric treatment to an alternate (but not necessarily inaccurate) history of the Putin moment. In the post-Soviet ’90s, Babylen Tatarsky (Vladimir Yepifantsev) is working his way up the ladder of Moscow’s emerging advertising industry. By day, he develops a knack for Russianizing Western product pitches; by night, he dabbles in drug-fueled explorations of Babylonian theology. Babylen’s simultaneous educations in capitalism, the occult, and psychedelia eventually come together in a new career application for his talents: directing synthesized political spectacle in a mocap studio, creating footage the Russian public reads as real. Generation P is long and incredibly dense, but it’s never boring—it’s too wild and unhinged. The more you know about the past 20 years of Russian history, the more you stand to “get” from its coded references, though as with the not-totally-dissimilar Holy Motors, deciphering every frame might be beside the point. After all, most of the time, most of the characters on-screen don’t know exactly what’s really happening or why—they only know their individual roles in the machine. The psychedelic impulse is about nothing if not the limits of what, under normal circumstances, can be understood or seen, and to apply its concerns in such an expansive way to real, right-now sociopolitical catastrophe makes for a pretty radical critique.

In his brief life, Anton Chekhov churned out a handful of theatrical masterworks, dozens of short stories, and thousands of letters. So it’s high time someone wrote back. In Donka: A Letter to Chekhov, director Daniele Finzi Pasca (whose ample résumé includes several Cirque du Soleil shows) uses “cinematic vignettes” and circus technique to present audiences with a multifaceted vision of Chekhov. This production (staged at the Brooklyn Academy of Music, which has made a commitment to works of nouveau cirque) re-creates Chekhov’s life by drawing on his diaries and making much use of acrobats, aerialists, rose petals, petticoats, and magic—theatrical and literary. Think you know The Three Sisters? Well, you probably haven’t seen them trying to get to Moscow via trapeze.

If you’ve been following the trial of the punk-feminist collective Pussy Riot in Moscow, you know how absurd it is that these three young women are facing serious prison time in a labor camp for their performance of a piece titled “Our Lady, Chase Putin Out!” in Christ the Savior cathedral. Tonight, on the eve of the trial’s verdict, Chloe Sevigny, Eileen Myles, Karen Finley, Johanna Fateman, and Mx. Justin Vivian Bond read from the inspirational courtroom statements by these brave women. On Friday, there will be a march and rally.

Imagine living it up in high society on Park Avenue, losing it all in a Ponzi scheme, and being forced to move out to the ‘burbs. You wouldn’t be happy, would you? Neither is the Prozorov family, especially the Three Sisters, whose misery over their provincial life is the subject of Chekhov’s classic play. When the story begins, the urbane Moscow-bred clan has been living in a small Russian town for 11 years but still clings to the hope of returning to their formerly high-class lives. This production comes here direct from St. Petersburg, where the Maly Drama Theatre has been operating since 1944. The company’s boundary-breaking director, Lev Dodin, helms the Russian-language production.

You haven’t experienced cold until you’ve been to Russia, where in April, Moscow’s streets are piled with snow up to your knees. We don’t even want to know what January is like in that vast, northern land, but Brooklyn Botanic Garden’s Linnaean Libation League dares to imagine the country’s dark winter nights at a “Russian Retreat” cocktail party. Snack on caviar and crackers in a 1918 structure reminiscent of Russia’s forest villas, while the balalaika plays and Russian-born author Lara Vapnyar reads from her short stories. It might be cold outside, but do as the Russians do to keep warm—drink vodka, lots of it.