Welcome to 100 Dishes to Eat Now, the tasty countdown leading up to our “Best of 2012” issue. Tune in each day (weekends too!) for a new dish from the Fork in the Road team.

Jonathan Greenberg used to cook the pies at Paulie Gee’s and Franny’s. Now he’s in Prospect Heights, running a cute neighborhood slice spot with both counter service and seating. The dough is made with organic flour, the teeny meatballs with grass-fed beef. Though the thin crusts are pale as generic delivery pizza, they’re not dense or soggy. Play arcade games while you wait for your order and nibble on crisp, golden rice balls (below, $6) 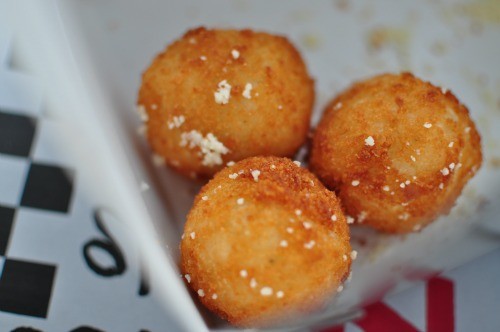 Read the most recent posts on our food blog or check our longer weekly reviews. Contact the writer at trao@villagevoice.com.

See what we’ve been up to at Fork in the Road this week:

We’ve got our 10 picks for Middle Eastern restaurants in the city.

Following his review of John Brown Smokehouse, Robert Sietsema runs down the five best barbecue dishes he had at the restaurant.

He also checks out the offerings of a new meatball stall, Meatball Obsession.

We talk to Hella Bitter’s Benjamin Ahr Harrison about the world of an artisan bitters maker … and also to JoeDoe’s Joe Dobias about sandwiches — what else?

Oh, yes, and a really pretty vegetable called huazontle (also a cool word to say out loud) is popping up in Mexican markets and restaurants for spring; Starbucks is pissing off vegans; and Carnegie Deli’s Tebow sandwich sucks.

At Edible Manhattan‘s cocktail pairing event taking place on Tuesday, February 28, from 6 to 9 p.m., you can try out drinks made by New York City mixologists with craft spirits. Tickets are $45.

The Masters of Social Gastronomy’s February lecture is all about candy. Learn plenty of candy facts and try samples on Tuesday, February 28, at 7 p.m. at Public Assembly. Admission is free.

Decide if the USA can hold its own against Europe when it comes to wine, cheese, and charcuterie at a workshop held at the Astor Center on Wednesday February 29 at 6:30 p.m. Tickets are $59.
Listen to Marion Nestle talk food politics at Barnard College on Thursday, March 1, at 5:30 p.m.
The third annual Meatball Slapdown is happening this Friday at 7 p.m. at the Brooklyn Kitchen. Taste the meatballs of six New York restaurants: Masten Lake, the Meathook, the Meatball Shop, Roberta’s, Vesta, and Riverpark. Tickets are $50.
The 92Y Tribeca is hosting a tour of Brooklyn’s famous pizzerias this Sunday, March 4. You’ll head to Grimaldi’s and L&B Spumoni Gardens, and sightsee around Brooklyn neighborhoods. Tickets are $75.

And now, a look back at what was on the menu here at Fork in the Road this week.

Robert Sietsema slurps stews in this week’s 10 Best Soups in NYC. From borscht to matzo balls, he offers up the city’s tastiest picks.

Lauren Shockey tells you what kind of booze to buy in her holiday gift guide. Check out Shockey’s extensive list — and learn what to buy the alcoholics in your life.

Sparkletinis taste like a Four Loko-champagne mash-up. Spoiler: $8 faux bubbly is as bad as it sounds.

Balls taste great — when made of pork!

Suppose you have too much time on your hands, and tend spend it feeding your inner fat kid instead of doing yoga (or another awful physical activity).

Now Fork in the Road does not want to advocate unhealthy lifestyle choices — you should totally go jump rope and run up stairs listening to “Eye of the Tiger” instead of relaxing over a steak dinner and glass of Malbec — but the bloggers here can certainly point you in the right direction if you simply insist on indulging and imbibing.

And the blog’s most recent culinary experiment will do just that.

An idea was recently born among the Voice‘s expert, gourmet culinary team: What happens if you make pork meatballs with pork rinds, pork cracklings, and pork liverwurst blended into the ground meat?

Here’s what went down in the Voice‘s state-of-the-art test kitchen. (OK, so a kitchen in a friend’s apartment, because I don’t have a usable kitchen right now, but whatever.)

First, I crushed a snack-size bag each of rinds and cracklings by whacking the packs against the wall, later pulverizing the remaining chunks with my firsts. I dumped them into a bowl with the pound of ground pork and the 12-ounce cylinder of liverwurst. I chopped up some green onions — maybe a bunch — and threw them onto the meat, along with some salt and pepper. I used my hands to blend everything, because I wanted a true sense of the obscene piggishness developing before my eyes. Then, I rolled the mix into golf-ball-size orbs and set them on a plate.

Meanwhile, I poured about a bottle’s worth of cheap red wine into a pot, along with a two sticks of butter (go ahead and use more if you want — it only makes everything taste better), salt, pepper, and palmfuls each of dried rosemary and thyme. Also added: a julienned red onion and a package of sliced, white mushrooms. (Shallots probably would have worked better, but uptown groceries ain’t very fancy.) I brought this to a boil and licked the liverwurst packaging clean (who wouldn’t?), but I didn’t drink the remaining wine, since it was something awful like Two-Buck Chuck, and I didn’t feel ironic enough to do that.

At long last, I dropped my balls in the pot and let that bad boy simmer for quite a while — around 45 minutes.

The sauce started to reduce and thicken with time, I noticed, so it developed a pleasant, marsala-like vibe, though it felt a little soupier than I wanted.

Now, keep in mind: These aren’t exact directions or measurements at all. If you try re-creating this, it will taste more or less like my “recipe.” Just check that your klopsks get cooked thoroughly, so that there’re not pink on the inside. One more thing: Make sure to finagle with the sauce, so that it develops a more of a gravy-like consistency than mine did.

As for the meatballs themselves, they came out divinely.

The fried fillers appeared to absorb lips and moisture from the ground raw, so the spheres blossomed with soft, salty shards of seasoned fat. The liverwurst contributed a sense of thick, creamy richness, giving the final product a deep, wholesome juiciness.

At first, I was equally worried about undercooking the meatballs and drying them out, but each sampling suggested that they took on more and more of the broth’s oils and flavors over time, making them paradisaical porcine puffs.

Also, I saw that they kept their shape and a fluffy, fleshy consistency — even though I didn’t use egg or bread crumbs. You can try them over buttered, flat noodles — but they taste best when you just hunch over the stove and harpoon them with a fork.

For more dining news, head to Fork in the Road, or follow us @ForkintheRoadVV.

Michael Chernow is one half of the duo behind the wildly successful Meatball Shop, located on the Lower East Side. This past summer saw the opening of the shop’s Williamsburg branch, and now Chernow has co-written The Meatball Shop Cookbook along with chef Daniel Holzman and Lauren Deen. But the Meatball Shop almost wasn’t meant to be. Chernow tells us how he and Holzman had originally intended a very different restaurant all together.

So, how did you come up with the meatball concept for a restaurant?

Daniel [Holzman] and I grew up in New York City together. We’ve been best friends since we were 13 and had a dream to open a restaurant together. After high school, I worked in restaurants and Daniel went to California to work. I did front of house and then went to culinary school to put fire under my butt to get going. Then Daniel came back to help launch the restaurant. We had another concept in mind and the meatballs were a side project, but then as we were looking for investors, we cooked them meatballs. Once we saw the action at the table, we decided to hop on the meatball concept and bang out the idea. What we found out was that people love meatballs. They’re accessible; everyone has a meatball story. Ask about their meatball pasts and they’ll have skeletons in the closet.

What was the other concept that you scrapped?

The other concept was more of a Mediterranean one. We had been working in fancier restaurants and wanted to bring a fancy Mediterranean concept to a more casual setting. Instead we took an at-home food and brought it to the restaurant.

Is it hard running a business with your best friend?

There are definitely challenges. But we’ve known each other for 18 years and love each other dearly and fill in the gaps for each other, for sure.

Let’s talk about the book. What should everyone know about making meatballs at home?

The book is really self-explanatory. It makes it really easy for you. I guess the A-Number One tip is don’t intellectualize when cooking. Really have fun with it and don’t overthink it and don’t squeeze your meatballs into a tightly packed ball; roll a fluffy light ball. Having fun is the number-one piece of the puzzle. Lots of people are scared that it’ll taste bad. Unless you’re in pastry, where precision is important, it’s going to be fine.

What are some of the meatballs you’ll find in the book that you can’t get at the restaurant?

What are the most popular types of meatballs ordered at the Meatball Shop?

Statistically, the beef meatballs with tomato sauce in a bowl is the most popular dish. Just classic, naked meatballs of beef with tomato sauce. For a meatball veteran, the chicken meatballs with Parmesan cream sauce over mashed potatoes is incredibly delicious. Or the spicy pork meatballs over polenta. The steak ‘n’ bacon meatballs on a hero is a hangover helper. Me, personally, I’m really healthy, and the food at the Meatball Shop is really healthy. It’s all-natural and there’s nothing in there that’ll kill you. I kind of err on the healthier side. I have a kitchen-sink salad with vegetarian meatballs and pesto sauce.

Have there been any meatball flops?

One that we did early on — the salmon meatballs. Some people loved it; some didn’t love it. When we get three people saying they aren’t stoked with it, we’ll take it off.

You opened an outpost in Brooklyn this summer. What, if anything, is the biggest difference between the two spots?

There are a few differences. When you walk into the shop on Bedford, you’ll know instantly that you’re in the Meatball Shop. One thing you’ll notice is that [the Meatball Shop on] Bedford is double the size of [the one on] Stanton Street. Another difference is that we have a full liquor license with a full cocktail program that we put a lot of energy into. It’s similar to the slider grid in that you choose your mix-in and alcohol. But the energy and service are the same, and lots of fun. We’ve been in restaurants for the longest time and just wanted to create a place where we could hang out with our friends.

Any indication for when the next location will open?

We are definitely getting ready to open our West Village location. It’s at 64 Greenwich Avenue at Perry Street. We’ll open sometime in November. The West Village is a different demographic for us, so we’re hoping to serve younger families.

Check back in tomorrow, when Michael tells us where he’s eating when he’s not chowing down on meatballs.