I Like Your Glasses: Literary Speed Dating
Housing Works Bookstore
Tonight, 7pm, $10
Your skepticism is justified. People with the rock-solid attention spans and copious alone time required to really bunker down to some hardcore reading tend to be the very same who run for the stacks when faced with the comparative brevity and binge socializing of speed dates. But no more. Because here, sustaining a thimble-sized bloodbath of paper cuts after flipping through Infinite Jest‘s 388 extra-textual footnotes and vacationing at Walden Pond for two consecutive spring breaks doesn’t make you weird or reclusive, no, but rather the stud. Dan Wilbur, author of How Not to Read teams up with seasoned hostess Jo Firestone to present this get together by CoverSpy. Daters are encouraged to bring a favorite book–there’s no better wingman.

Lars Iyer + McKenzie Wark
Book Court
Thursday, 7pm, free
With his fictional debut Spurious in 2011, and it’s sequel Dogma out last year, Lars Iyer became the kind of critic-adored cult hit that Melville House seems so good at smuggling into Brooklyn. Tonight he will read from Exodus, the final installment in this trilogy about two out-of-work intellectuals who feel utterly betrayed by culture. The protagonists bicker and bitch their way to enlightenment (Iyer has cited Don Quixote and Sancho Panza–that other pair of literary frenemies–as inspiration), while pondering Kierkegaard, pantslessness, and many a well-dropped insult. Media theorist McKenzie Wark mediates, and sponsor Full Stop will provide gin and wine. 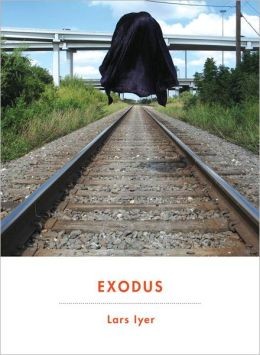 Jack Kerouac’s Bilingualism: A Panel Discussion with Joyce Johnson
Barnard College
Monday, 6pm, free
Rev-up your Ford flatbed and hold on to those freedom fries, because we’ve got news for you. Jack Kerouac, possibly the most American of all Americans to ever traverse the highway system, originally began writing On the Road in French! Sacré that bleu. Author and Brooklyn native Joyce Johnson, who briefly dated Kerouac in the ’50s (after Allen Ginsberg set them up), will talk with French professor Hassan Melehy about the lead Beat’s cultural and linguistic Francophilia.

Paul Muldoon + Timothy Donnelly
McNally Jackson
Tuesday, 7pm, free
Pulitzer-embossed Paul Muldoon returns to give us The Word on the Street. His newest work is an exploration of the muddled term “lyric” and its original meaning as a poetic form, striking at the point where any given smattering of stanzas moves from poem to song. Themes include Charlton Heston, cellulite, pole dancing, and Jersey peaches, with a good chunk of the works coming straight from the set list of Muldoon’s rock band Wayside Shrines. He will discuss genre-hopping with fellow bard Timothy Donnelly, author of The Cloud Corporation.

Proust in 24 Hours: with Adam Gopnik and Anka Muhlstein
192 Books
Tuesday, 7pm, free
Swann’s Way, the first volume of Marcel Proust’s seven-part novel, was turned down by every major editor in France before he caved and coughed up the cash to publish it himself in 1913. Now, one hundred years later, we’re glad he did, because 192 Books is celebrating the novel’s centennial with a marathon reading that will sweep well into tomorrow. New Yorker essayist Adam Gopnik will take a break from hanging around the set of Charlie Rose to introduce the event with Anka Muhlstein, author of Monsieur Proust’s Library. Champagne and madeleines will be on hand to help induce some involuntary memories of your own.

While Jack Kerouac’s adventures as a beatnik youth are no secret thanks to his classic book, On the Road, the author’s personal life is another story all together. The Voice Is All: The Lonely Victory of Jack Kerouac, by Joyce Johnson, sheds some light on the elusive writer’s childhood, influences, and relationships and, unlike her other book on Kerouac, Minor Characters, this is the first biography of Kerouac to draw from his own journals and abandoned manuscripts. Hear Johnson, a close friend of Kerouac’s for 50 years, discuss the book with New York Times journalist and Kerouac expert John Leland at the Strand.

Longtime Manhattan Congressman Charlie Rangel can breathe a sigh of relief — the 82-year-old Democrat has survived what was expected to be the fight of his political life.

Rangel, who fought in the Korean War before getting elected to Congress (42 years ago), came out on top in yesterday’s five-person Democratic primary — and that’s after he was formally censured by the House of Representatives for multiple ethical violations stemming from — among other ethical issues — his failure to pay taxes on income he received from a rental “villa” he owns in the Dominican Republic (that photo to the right is Charlie enjoying his villa).

Yesterday’s primary was the first time Rangel’s had to face voters since
getting censured — and since the 2010 census had him redistricted into
New York’s 13th Congressional District, which is 55-percent Hispanic,
an obvious benefit for Espaillat.

“There’ve been all kinds of questions asked of me in the last few
minutes,” Rangel told supporters last night. “Most of them is ‘How do you feel?’ And I cannot find
words to describe that.”

In addition to his ethical issues — and redistricting dilemma — Rangel
had trouble raising money for what is now his 22nd re-election
campaign. Fellow Democrats — who’d received favors from Rangel in the past — ponied up the cash to fuel his primary push.

Despite Rangel’s new district being predominantly Hispanic, it’s still a
Democratic stronghold. In other words, Rangel’s likely a shoo-in in the
general election.

So, congratulations, New York — chances are you’re sending an 82-year-old tax cheat back to the House of Representatives.

Ex-Kerouac flame and tireless memoirist Joyce Johnson continues her incisive dissection of late-20th-century boho Manhattan in Missing Men, a three-part chronicle that centers around the lingering influence of absent—physically and otherwise—fathers and lovers. A follow-up of sorts to Minor Characters, Johnson’s celebrated 1983 recollection of life with the King of the Beats (her archetypal AWOL lover), Missing Men describes her sequential post-Jack marriages to two struggling abstract expressionist painters. Moody, magnetic alcoholic James Johnson and distant Brit Peter Pinchbeck, we learn, are cut from the same cloth as Johnson’s maternal grandfather, a tormented immigrant poet whose suicide established a legacy of loss his female progeny seem helpless to escape. The book’s first and best segment describes one such descendant: Johnson’s mother, Rosalind, a fascinating, iron-willed mix of pathos and pluck who cajoled the young Joyce into a brief but memorable stage-acting career and started her down the path of artistic endeavor. Johnson comes across here as something of a charmingly old-fashioned New York snob whose awareness of life beyond Soho and the East Village is willfully limited, but she also establishes herself as an unusually keen observer of emotional flux.