The fourth season of HBO’s Game of Thrones doesn’t premiere until April 6, but those familiar with the lands and legends of Westeros and Essos have already found their way to Over the Eight in Williamsburg. Every second Sunday since January, Thrones aficionados have gathered for a trivia tournament as epic as George R.R. Martin’s fantasy series. The competition is organized by Thrones ultra-nerds Upjumped Sellswords, and features five-person teams with cheeky names like Cripples, Bastards, and Broken Things vying for bar discounts and a mystery grand prize by answering obscure questions about Martin’s A Song of Ice and Fire books. TV-only fans should be wary of spoilers, and though the live event lacks the show’s signature mix of gratuitous nudity and violence, the atmosphere is reportedly lively, with craft beer and cocktails offered at happy hour prices throughout the night.

George R. R. Martin took a break from killing Starks on Game of Thrones today to send us this list of the notes he would send to the producers of TV shows if he were put in charge of them. [NOTE: We made this up.] Here’s what he dashed off for us, in between shouting descriptions of imaginary feasts.

See Also: Inside the Traveling Game of Thrones Exhibit

My Three Sons: That’s two too many.

Project Runway: This week’s challenge: Fashion something grand from smallclothes and boiled leather.

G.I. Joe: You know those parachutes that save the Joes every time their jets get shot down? Let’s replace those with death-shadows expelled from Lady Jaye’s vagina.

Twin Peaks: The story of Roz, a Winterfell girl trying to make it in the big city.

The Tonight Show with Jay Leno: Six times the warrior is slain, and six times the Lord of Light imbues him again with unholy life.

I Love Lucy: The line dividing Lucy and Ricky’s halves of the apartment is patrolled by bastards and rapists.

True Blood: Everything is 22 percent less cartoonishly bloody and gratuitous.

The Flintstones: “It’s a living,” sighs a dinosaur/turntable, just before immolating its master.

Survivor: There is no survivor.

To Catch a Predator: Predator escapes, slowly becomes the hero.

Happy Days: In mid-shark jump, Fonzie is bitten in half.

Full House: Now has vacancies. Also: When Uncle Jessie marries Samantha, the sound of a blade gutting Danny Tanner turns out just to be one of Joey’s amusing sound effects.

I Dream of Jeanie: Before meeting Larry Hagman, Jeanie wanders the desert for seven seasons.

The Simpsons: No changes! Like all good series, the first half should be tight, focused, and touching upon brilliance. Then, it should bloat on and on, focusing on irrelevant characters and growing increasingly tiresome and meaningless.

The Brady Bunch: Each kid has a wolf the network can’t afford to show much. Cousin Ollie’s is white.

See Also: Inside the Traveling Game of Thrones Exhibit

A Game of Thrones author George R.R. Martin makes what he calls an “embarrassing confession” in the new cookbook based on his popular fantasy series: He can’t cook.

In his introduction to A Feast of Ice and Fire: The Official Game of Thrones Companion Cookbook, Martin explains that he has always been better at eating than he has at cooking. And he goes on to explain why he spends so much time writing about food:

My goal as a writer has always been to create an immersive vicarious experience for my readers…Sights, sounds, scents–those are the things that make a scene come alive. Battle, bedroom or banquet table, it makes no matter; the same techniques apply. That’s why I spend so much time and effort describing the food my characters eat; what it is, how it’s prepared, what it looks like, what it smells like, what it tastes like. It grounds the scenes, gives them texture, makes them vivid and visceral and memorable. Sense impressions reach us on much deeper and more primal levels than intellectual discourse can ever hope to. 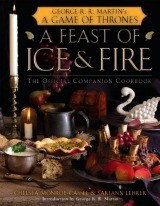 The book’s authors, Chelsea Monroe-Cassel and Sariann Lehrer run the popular blog, Inn at the Crossroads, where they began cooking their way through Martin’s books. I talked to them last September when they were still working on the manuscript and had just finished frying a batch of honeyed locusts. How exciting to see the final project now, full of Medieval and modern recipes, and divided up by fictional kingdom. The book goes on sale May 29.