Jonathan Lethem and Jessica Hagedorn
Greenlight Bookstore
Wednesday, 7:30 p.m., free
A quick word on Jonathan Lethem–he’s awesome. That’s it. Because this guy is one of our favorite native sons. The author of Motherless Brooklyn (Vintage) and The Fortress of Solitude (Vintage) has the ability to pogo from sci-fi to memoir to detective fiction to hipster lit and back again, but he’s always been unshakably New York, in subject matter, support for Occupy Wall Street, outspokeness against the corporate renaming of Shea Stadium, etc. In September he’s slated to release his next novel, Dissident Gardens (Random House), a family epic set in Queens, but tonight he’ll talk with Long Island University professor and author Jessica Hagedorn about past work and his connection to Brooklyn.

M. Henderson Ellis and Rosie Schaap
Bohemian Hall & Beer Garden
Wednesday, 7 p.m., free
It would seem absurd to host these authors anywhere but a rowdy Czech beer hall. In Ellis’s first novel, Keeping Bedlam at Bay in the Prague Cafe (Random House), a Chicago man is fired for being “too passionate” about his job as a barista at a coffee chain, kickstarting a quixotic journey through newly post-communist Prague. Schaap’s travels, on the other hand, are booze-soaked rather than coffee-fueled. In her memoir Drinking With Men (Riverhead), she recounts a childhood spent in the bar car of a train, telling passengers’ fortunes in exchange for beer. Her love letter to pub culture highlights the sense of community that barrooms (and, we’ll wager, also the alcohol) create among strangers. Toast them with a pint at this night of readings. 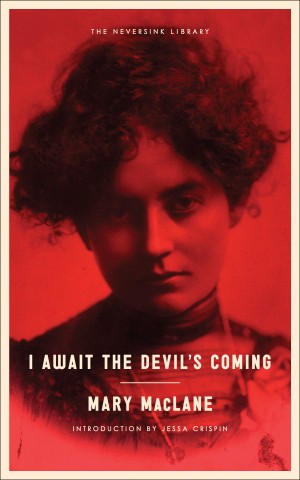 Book Court
Wednesday, 7 p.m., free
You may not have heard the name Mary MacLane before, unless you’re into obscurist memoirs or maybe a big fan of Manitoba province like yours truly. But the Canadian-born, American-relocated writer has been called our country’s first blogger, despite the fact that she was working in the late 19th century. Her racy lifestyle and scandalous autobiographies gained her 50 Shades-level fame at age 19–think a slightly older, female Rimbaud–and by 1917 she was filming and starring in the Warhol-esque picture Men Who Have Made Love To Me. A mysterious young death added to the scandal before her memory and her work fell into the margins. Tonight author Emily Gould (And The Heart Says Whatever, Free Press), playwright Normandy Sherwood, and scholar Kara Jesella will discuss MacLane’s 1902 autobiography I Await the Devil’s Coming (Melville House), and how she paved the way for the realist confessional style.

Demetri Martin
Barnes & Noble Union Square
Thursday, 7 p.m., free
Somewhere, we imagine a retirement home for indie comedians–Reggie Watts, Kristen Schaal, and Aziz Ansari all one day sitting around a table playing the funniest game of dominoes ever. For a second, we feared Demetri Martin was already there, but thankfully he’s back with Point Your Face At This (Grand Central Publishing), a new collection of drawings. As always, his pictures are crude in rendering but pack a big punch to the wits, and we’ve got to love a comedian who traffics in Wittgensteinian antinomy doodles (which, by the way, are also a barrel of laughs). Ah…if only Demetri was sitting next to us in every lecture we’ve ever had. Tonight we can imagine as he reads and previews his sketches.

Douglass Rushkoff and Rachel Rosenfelt
McNally Jackson
Thursday, 7 p.m., free
Haven actually been called a “Luddite” in two different conversations in two different bars (always in an accusatory way, why?) we’re going to be careful about how strongly we recommend this. But in his new book Present Shock: When Everything Happens Now (Current), theorist Douglass Rushkoff makes some good points about the dicey ethos of real time technology, hyperspeed culture, fragmentation, and pretty much how everything is just happening too fast and for the love of god slow down please. He introduces his theory of “presentism,” basically an -ism ending word for how the largely tech-related immediacy of everything in our lives–conversations, media, ordering food–might have some less than stellar effects on our psychological and physical selves. Especially the ordering food part. He’ll chat–in person, machine free–with Rachel Rosenfelt, founder and editor of The New Inquiry. There’s no time like the present.

They say relationships are like glass—sometimes it’s better to leave one broken than hurt yourself trying to put it back together, unless that relationship is with yourself. Former Gawker editor and rehabilitated attention whore, er, gossip hound Emily Gould re-emerges into the media spotlight, this time to release her highly anticipated book of essays: And the Heart Says Whatever is an offshoot of her 2008 New York Times Magazine article that divulged her real-life Internet dramedy during her reign at Gawker. Beyond her eye-rolling fits facing Jimmy Kimmel on Larry King Live, Gould is best known for over-sharing her love life on the Web, making her both a media darling and pariah. It’s no wonder her memoir arrives at a time when Internet privacy is nearing extinction.

I was five, sitting under a tree when a fellow pre-schooler sat down next to me and said, “Put your mouth on my mouth.” Yup, to say it was weird and sweet pretty much sums it up. We hope the stories featured in First Kiss, the one-off zine of Marisa Meltzer and Elizabeth Spiridakis, won’t be as awkward—yet we highly doubt that. Tonight’s reading includes accounts of first kisses featured in the zine by former Gawker writer Emily Gould (And the Heart Says Whatever) and New York Times music critic Jon Caramanica, among others, with pre-taped stories told by fashion tween blogger Tavi Gevinson and Spencer Tweedy (son of Jeff). Though we’d have to say we’re looking forward to hearing the story behind our very own Zach Baron’s first smooch, which took place when he was 12. Sounds juicy! We also hear live, onstage kissing may be involved. Ew, cooties!