EDITOR’S NOTE
Much has gone missing in 2020: facts, civility, partying, and, here in the Apple, the annual New York Comic Con. The convention was supposed to take place within the glass and cement confines of the Javits Center from today until Sunday, but has moved, thanks to Covid-19, to a pixilated screen near you.

Another blow: the larger comics realm lost one of its heroes in June, writer Dennis O’Neil. In a short autobiography that appeared in DC Comics’ Showcase #83 (June 1969, featuring his new sword and sorcery character, Nightmaster), O’Neil wrote, “Born May 3, 1939, St. Louis, MO. Parents weren’t aware that my first name is derived from that of a Greek god, Dionysius — god of revels, fantasy, and making-a-fool-of-oneself. Parents weren’t aware, but oh me, oh my, they were prophetic.” He also notes that he had a “usual midwestern childhood, which included large doses of make-believe, fueled by movies and — yep! — comic magazines.” In college, O’Neil studied English Lit, creative writing, and philosophy, then spent time in the Navy, making “the world safe for democracy by deluging the enemy in mounds of press releases.” After discharge he spent time hitchhiking around the country, and ultimately returned to the “Show Me” State to work as a reporter.

But in the mid-1960s, O’Neil’s interest in comics was rekindled when a friend, comics editor Roy Thomas, suggested he take the Marvel Comics writer’s test, which consisted of filling in blank dialogue balloons from a few Fantastic Four pages. O’Neil was soon writing scripts for Millie the Model. But, as the pseudonym he began using — Sergius O’Shaughnessy, cribbed from the name of the fighter-pilot protagonist in Norman Mailer’s The Deer Park — portended, O’Neil was seeking higher planes of storytelling. Around this time he moved to NYC’s East Village, where he began writing the stories that would place him in the pop-cult pantheon.

Anyone who has seen Christopher Nolan’s Batman trilogy on the big screen has witnessed the villainous exploits of two O’Neil creations: Ra’s and Talia al Ghul. Both came out of O’Neil’s and artist Neal Adams’s reboot of the Batman franchise in the early 1970s, which replaced the campy glow of the 1960s TV show with noir grit.

O’Neil’s East 2nd Street digs influenced his characters’ looks and attitudes, most prominently in his run on the Green Lantern / Green Arrow title. Beginning in April 1970 (#76), O’Neil brought the cosmos-roaming Green Lantern down to earth, where the Robin Hood–esque Green Arrow schooled him in the ways of crooked landlords. The masterful Adams enhanced O’Neil’s street-level script with dead-on depictions of dilapidated tenement buildings and boarded-up businesses. In one of the most famous panel sequences in comic book history, a black Everyman confronts the lofty Green Lantern, matter-of-factly noting, “I been readin’ about you. How you work for the blue skins, and how on a planet someplace you helped out the orange skins. And you done considerable for the purple skins! Only there’s skins you never bothered with — the black skins! I want to know how come? Answer me that, Mr. Green Lantern!” Living in the East Village, O’Neil had seen plenty to convince him that intergalactic crime fighters were not the answer to America’s ever-pressing social problems. And so his superhero answered, “I . . . can’t.”

But ever the optimist, the writer soon sent the superhero duo to battle greedy mine owners, crooked judges, racist cult leaders, and other villains of the Nixon era. O’Neil always hung his heart on the sleeves of his characters, one reason his earnest scripts have transcended their time. (The GL / GA run is perennially reprinted.) And certainly, the evil the heroes confronted back then has never gone out of fashion. O’Neil’s own struggles with alcoholism probably colored his ground-breaking plotlines dealing with drug addiction, which won many industry accolades and a proclamation from the office of then mayor John Lindsay. In a later tale, Green Lantern is almost blown to bits when a Weather Underground–style group destroys a townhouse; Adams’s imagery is very similar to newspaper reports (including those here in the Voice) of an actual event that took place on West 11th Street. 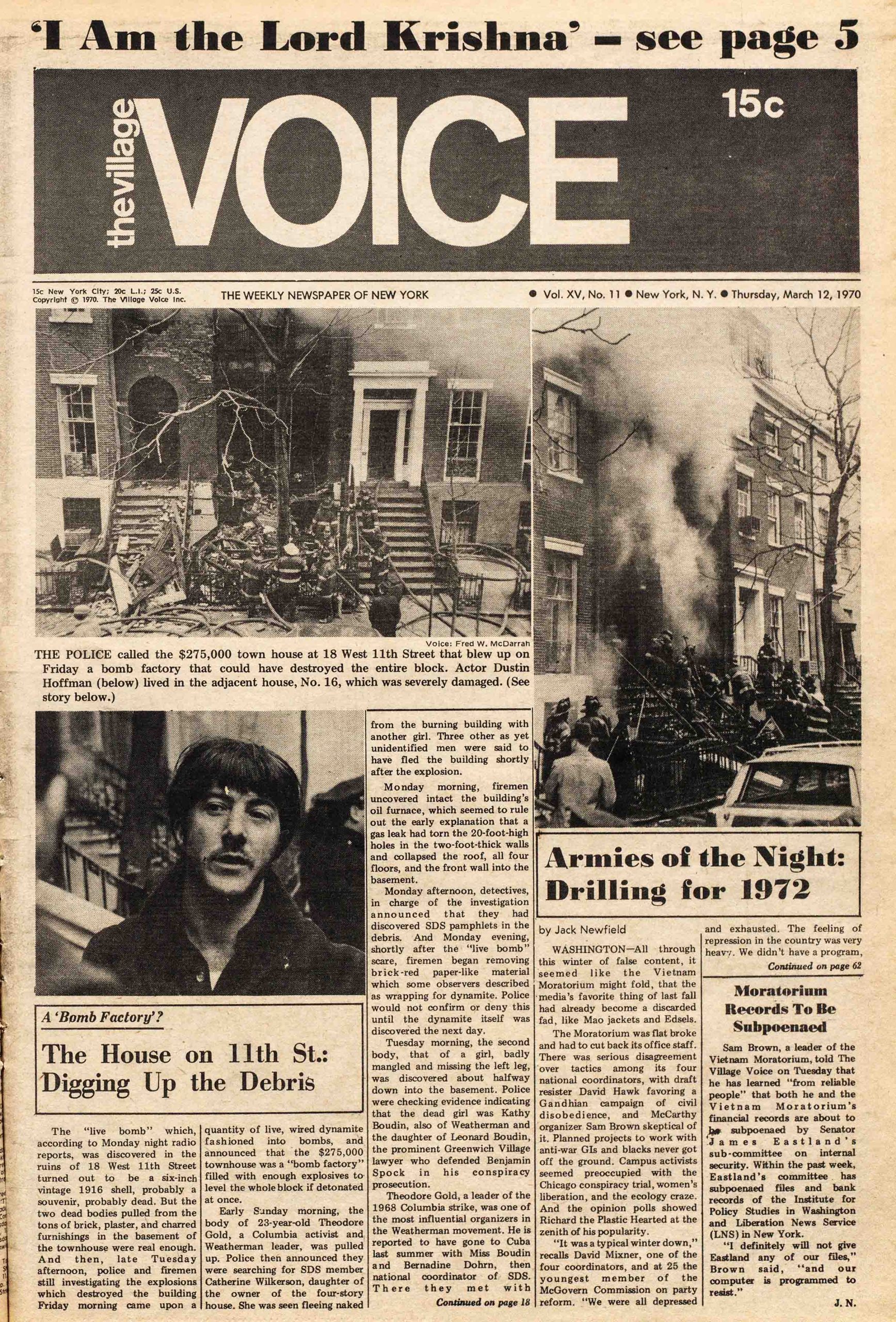 In addition to photos of the blasted dwelling, that March 12, 1970, issue of the Voice also included the headline “Armies of the Night: Drilling for 1972,” for an article about protests against the Vietnam War and concerns over a possible second term for Nixon. In a 2018 interview, O’Neil noted that early in his career, the Village Voice was “sort of my community paper,” and one could wonder if the writer was recalling that Voice front page when he quoted Mailer’s Armies of the Night in GL / GA #79: “Deliver us from our curse. For we must end on the road to that mystery where courage, death, and the dream of love give promise of sleep.”

No doubt the Village itself and the Voice (of which Mailer was a founder) influenced O’Neil’s worldview. While Marvel unabashedly set tales of Spider-Man, the Fantastic Four, Dr. Strange, and other super beings in New York City (even the outer boroughs), DC was more reticent, with Superman flying around “Metropolis” and Batman prowling “Gotham.” There was precedent for this: Perhaps the most noir of New York settings are found in Will Eisner’s Spirit masterpieces, which the Brooklyn-born writer and artist set in “Central City.” Still, when Eisner introduced his raw-fisted, wise-cracking crime fighter’s arch-nemesis, The Octopus, in 1946, the tale closed with the evil mastermind lighting a cigarette on the corner of 43rd and Times Square. O’Neil similarly elided settings, evoking the ramshackle neighborhood he called home in a scene where a wounded Green Arrow cannot find a working payphone. In his own creations, free of any DC backstories, O’Neil favored reality, landing a character such as Nightmaster on the bandstand of “The Electric Band Aid in the East Village.”

Knowing what a fan the comics virtuoso was of his home turf and its “community paper,” we thought we’d see if the Voice card catalog scored any “O’Neil, Dennis,” hits.

Alas, only one, and it’s a pan. As everyone knows, always more fun to read. —R.C. Baker 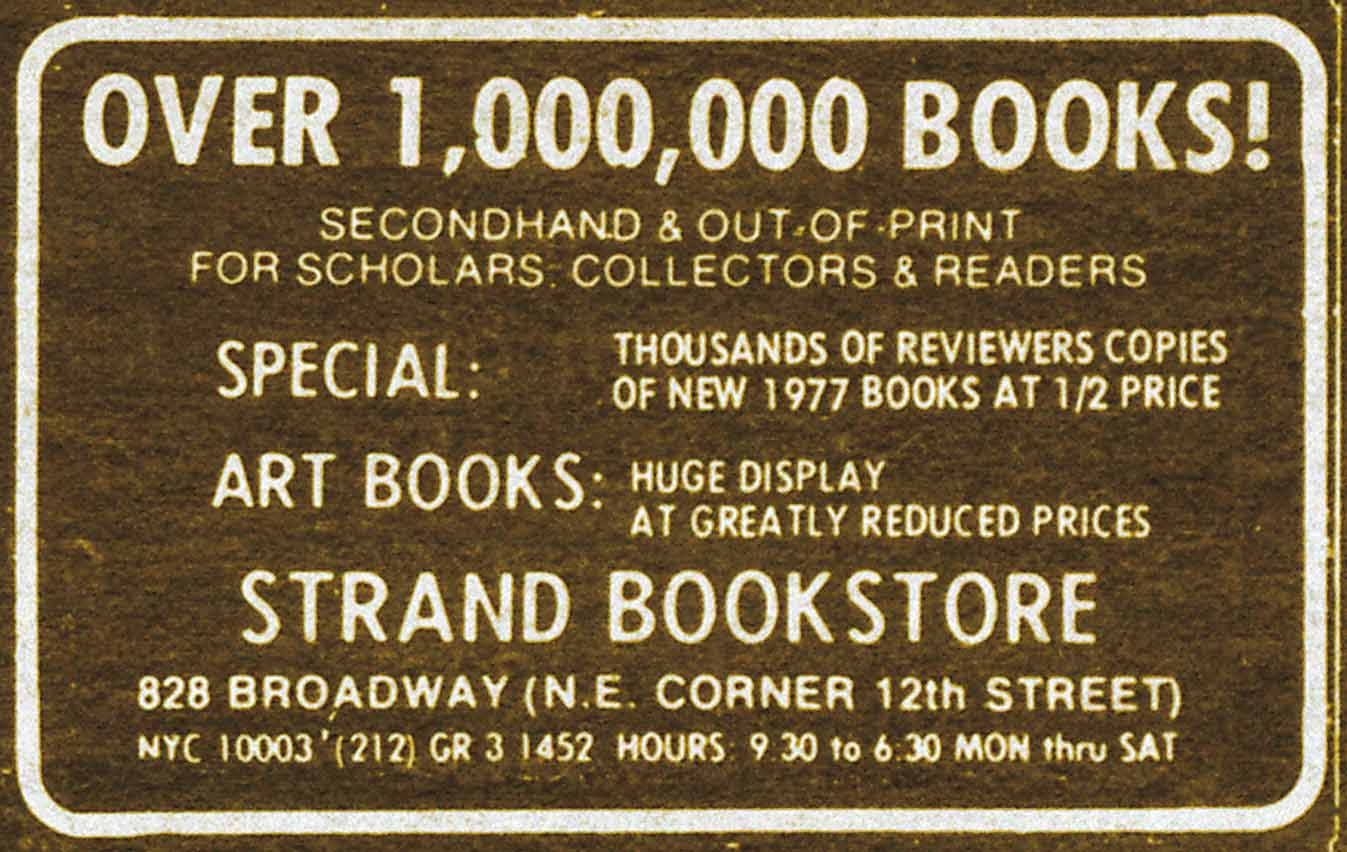 Someday soon somebody will produce the Great American Comic Book. Surely, there is an ambitious, post-McLuhan kid somewhere who recognizes the essence of the superhero form, the instant mythologizing of contemporary events through the telling of extravagant lies, and is ready to perfect it as cartoon narrative or music or film or even as prose. According to the promotional material accompanying Robert Mayer’s novel SuperFolks, the people at Dial believe Mayer is that kid. They’re wrong.

Not that Mayer is hopelessly inept. With seasoning, he could be pretty good; there’s no reason why he couldn’t write a decent Batman or Spider-Man script, for instance — and, in fact, while a reporter for Newsday, he did write 1/25th of the 1969 spoof, Naked Came the Stranger. But in Super-Folks he has virtually ignored that potential and has opted to be simultaneously cute and relevant. What he’s attempted to do is use superhero conventions in a double-thrusted satire of society and of the comics themselves. Unfortunately, his insight into his first subject is banal, and he has only a dilettante’s knowledge of his second. The result is the kind of smarmy hipness that characterized the godawful Batman television show of the mid-1960s.

Like the writers of the television show, he begins with a fairly standard plot, a variation on the “lost powers” theme. Superman — called, for some forlorn reason, “Indigo” — has hung up his cape and is living the life of a bedroom-community patriarch under the alias David Brinkley. (Everyone in Super-Folks is famously named, not the happiest of comedic inspirations. Brinkley works for a metropolitan daily headed by Punch Rosenthal; he has encounters with a beggar, Nelson Rockefeller, and a  detective, Kojak; his nemesis is the deadly chemical Cronkite, from the planet where he was born to Edith and Archie, before being adopted on Earth by Franklin and Eleanor. And so on.) Gradually Brinkley realizes that he has not lost his superhumanity, as he had thought, and finds himself drawn into a confrontation with the arch enemy every superhero must have.

Not bad, taken simply as the sort of tall tale all superhero stories basically are, and Mayer should have concentrated on realizing it. But he isn’t content to be a storyteller; he has larger, or at least different, ambitions. His opening sentences announce his intentions: “There were no more heroes. Kennedy was dead, shot by an assassin in Dallas. Batman and Robin were dead, killed when the Batcar [sic] slammed into a bus carrying black children to school in the suburbs.” This is the ploy he uses throughout the book, juxtaposing the real and imaginary, and letting the consequent absurdities make his satirical points.

The idea might seem original to those who believe culture is the stuff taught in college literature courses. But those whose taste is more eclectic, who can cherish William Gaddis and Garry Trudeau equally, will find it awfully familiar —after the comic strips of Trudeau and Jules Feiffer, the science fiction of Samuel R. Delany and Phillip Jose Farmer, Nicholas Meyer’s Sherlock Holmes pastiches, and, of course, Lenny Bruce’s nightclub routines. In short, it’s been done — originally and arguably best by Bruce — and Mayer has nothing new to contribute.

Mayer’s choice of satirical targets js as unoriginal as his literary device: suburbia, the mob, Abzug liberals, Buckley conservatives, conspiracy theorists, adolescent sex — it is as though Mayer were assembling Johnny Carson one-liners for a Modern Language Association stag party.

Despite Mayer’s failure as a social commentator, he still might have produced a funny book if he’d been able to be amusing on comics. But he seems unfamiliar with the subject, as if he hadn’t read a comic in the last 10 years. For the costumed world-saver set is no longer defined merely by extrahuman abilities and Boy Scout ethics. Mayer’s version of Superman hang-ups and hassles would lampoon the Superman concept only if the original hadn’t long since done the same. Benton and Newman could get laughs by portraying the Man of Steel as a nebbish because when their musical Superman was on Broadway comics were relatively unsophisticated. Now, however, superhero scenarists routinely give their characters a full catalogue of interpersonal and existential anxieties; their readers have come to expect them. Again, Mayer’s gimmicks are too familiar to be entertaining. If Super-Folks fails as satire and as humor, what’s left is for it to succeed as a thriller. Here, Mayer is almost a winner. He does write a hell of a climactic fight — grand, cosmic violence with a splendid twist ending. But this doesn’t begin until the last fifth of the novel and that’s way too late. Preliminary skirmishes, to delight us with the hero’s feats and to establish the possibility of the villain’s eventual triumph, are lacking, and since much of the art of the grandiose lie is in the building of anticipation through tantalizing hints at the punch line, this is fatal. Mayer shows us a lot of David Brinkley (Clark Kent) and not enough Indigo (Superman): he emphasizes the cocoon at the expense of the butterfly. Consequently, his climax is too isolated to be satisfying. So, in the end, it is as flat and disappointing as, well, a comic book without cartoons. ■ 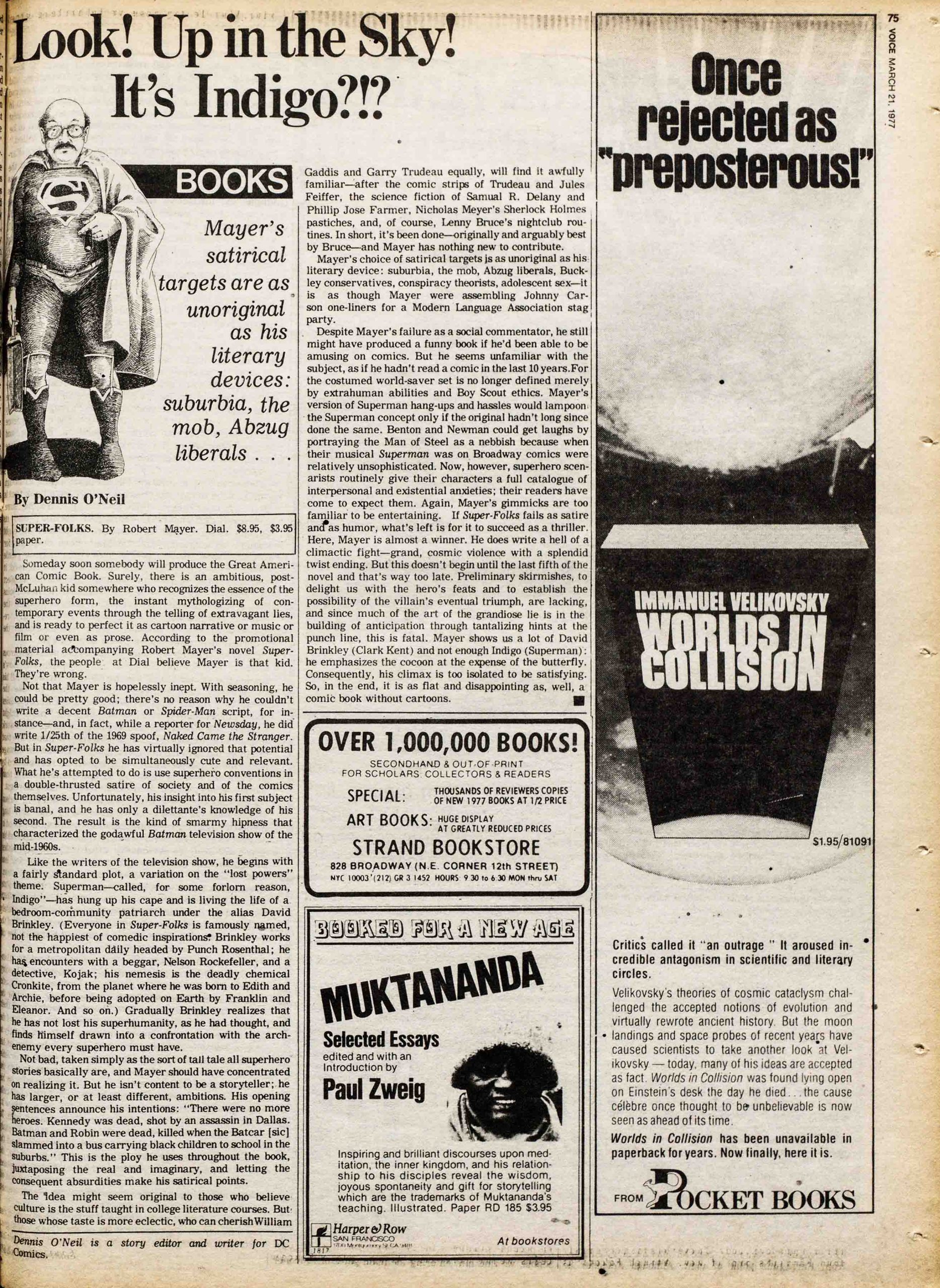 From his creation of The Spirit (and with it, much of comics’ visual vocabulary) in the 1940s through later groundbreaking works like A Contract With God and The Plot (his 2005 history of the anti-Semitic “Elders of Zion” hoax), Will Eisner always gave his audience plenty to chew on. Appropriately, MOCCA launches its Dinner and a Movie series tonight with Will Eisner: Portrait of a Sequential Artist, a full-length doc about the comics pioneer. A buffet dinner precedes the film; afterward is a panel discussion with director Andrew D. Cooke and acclaimed comics writers Dennis O’Neil and Paul Levitz, moderated by Danny Fingeroth.