[It was 1988 — pretty much the middle of the New York Yankees’ longest drought between World Series wins (1979–1995), and seven years since they’d even made it to the Fall Classic. All the more reason to sit in the cheapest seats, drink too much beer, and unleash invective upon visiting players and fans. As correspondent Ivan Solotaroff wrote in the September 20, 1988, issue of the Voice, “Baseball-watching invites strange behavior and, two weeks into this Yankee homestand, I’ve actually begun to fear the Voodoo Man’s Evil Eye, and to respect his power.” Solotaroff was referring to one of the bleacher regulars, called “Bleacher Creatures,” in this case a man with a pencil mustache who would train his “magnetizing gaze” on opposing ballplayers.

The Voice reporter succinctly summed up these lean times for the Bronx Bombers: “The Yankees, 2-8 in their last 10, are coming into the fifth inning down by a familiar four-run count. [Bleacher Creatures] Frank and Bob are already ingesting their remedy for slumps like this: many Jumbo beers, a confirmed one-way ticket back to second grade.”

Solotaroff then consults with Cousin Brewski, the beer vendor. “‘How are you? How are you? How are you?’” he asks from ten rows away. “‘The Voice? Sure, I’ll tell you everything you wanna know. The Regulars? Best fans out here. Class. They know everything. Teena’s got the batting averages, Bob, the Captain, knows every word of the “Gang Bang Song,” the “Get the Fuck Out Song,” “Syphilis,” all the songs. Melle Mel’s a singer too. Big rap star. Famous, famous, famous. Sees everything — the others tend to drift a little.’”

Sports give us a tribal outlet that might otherwise turn into uglier fanaticism, and the bleachers have never been a place for the fainthearted. But, as always, the crowd in ’88 was a disparate mix, the fans glad to have anything to cheer about. Melle Mel — “taking time from cutting a new album to attend every Yankee home game” — commands his compatriots’ attention when he bellows, “Let me hear it, one time, for my man Mr. Da-a-ave Winfield.” Solotaroff drily notes that the huge crowd screamed, “Dave, Dave, Dave” as Winfield looked at a third strike.

Winfield had signed with the Yanks in 1980, for the highest-paying contract in baseball at the time. And in his first year he delivered — at least during the regular season. But he was flat in the 1981 World Series, which the Yanks lost to the Dodgers, and that was the last trip he made to the playoffs in a decade of wearing pinstripes. “I let Mr. October get away,” said Yankees owner George Steinbrenner, in 1985, referring to clutch hitter Reggie Jackson, “and I got Mr. May, Dave Winfield. He gets his numbers when it doesn’t count.”

Still, Winfield’s long-striding grace in the outfield and powerful strokes at the plate (he hit 465 career homers) made him a favorite with many fans, especially the Bleacher Creatures, who would yell encouragement at the right fielder from directly over his head. “Yeah, we know him,” bleacher denizen Bob told the Voice reporter. “Well, we don’t know him personally, but, he sees us on the street, he knows, yeah, the bleachers. We gave him a plaque last year, congratulating him for his sixth consecutive year hitting 100 RBIs. He didn’t do it, he ended up with 97, but we gave him the plaque anyway.”

This was back in the day when all that most of us could count on was that fabled fifteen minutes (or hours or seconds) of fame — that epoch before the social chum of Facebook and the careening notoriety of Twitter. Being a tried-and-true Bleacher Creature offered proximity to greatness. As one cheap seat regular said to another, referring to the Voice scribe: “Talk to the man, Frank. Get famous.” —R.C. Baker ] 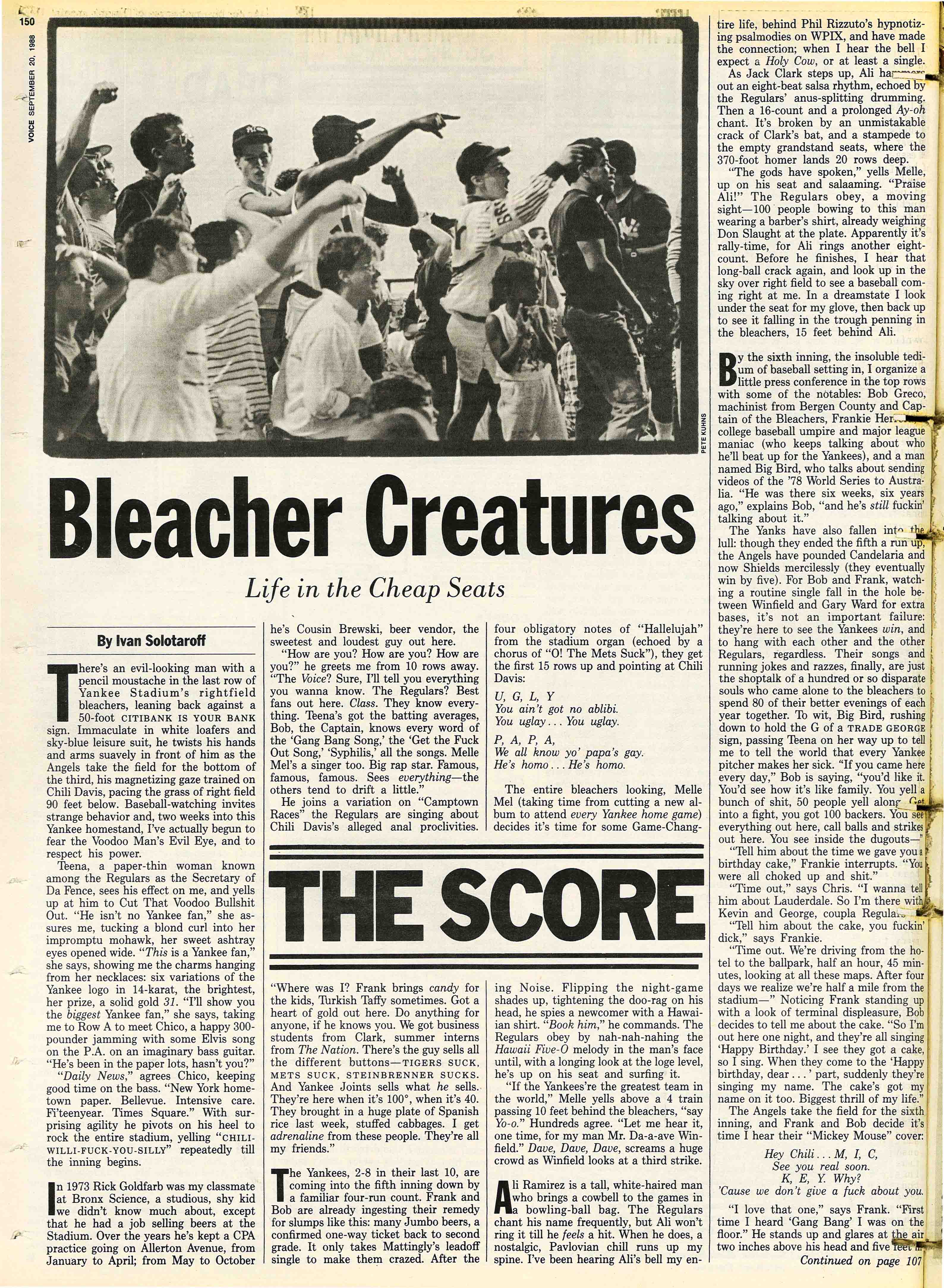 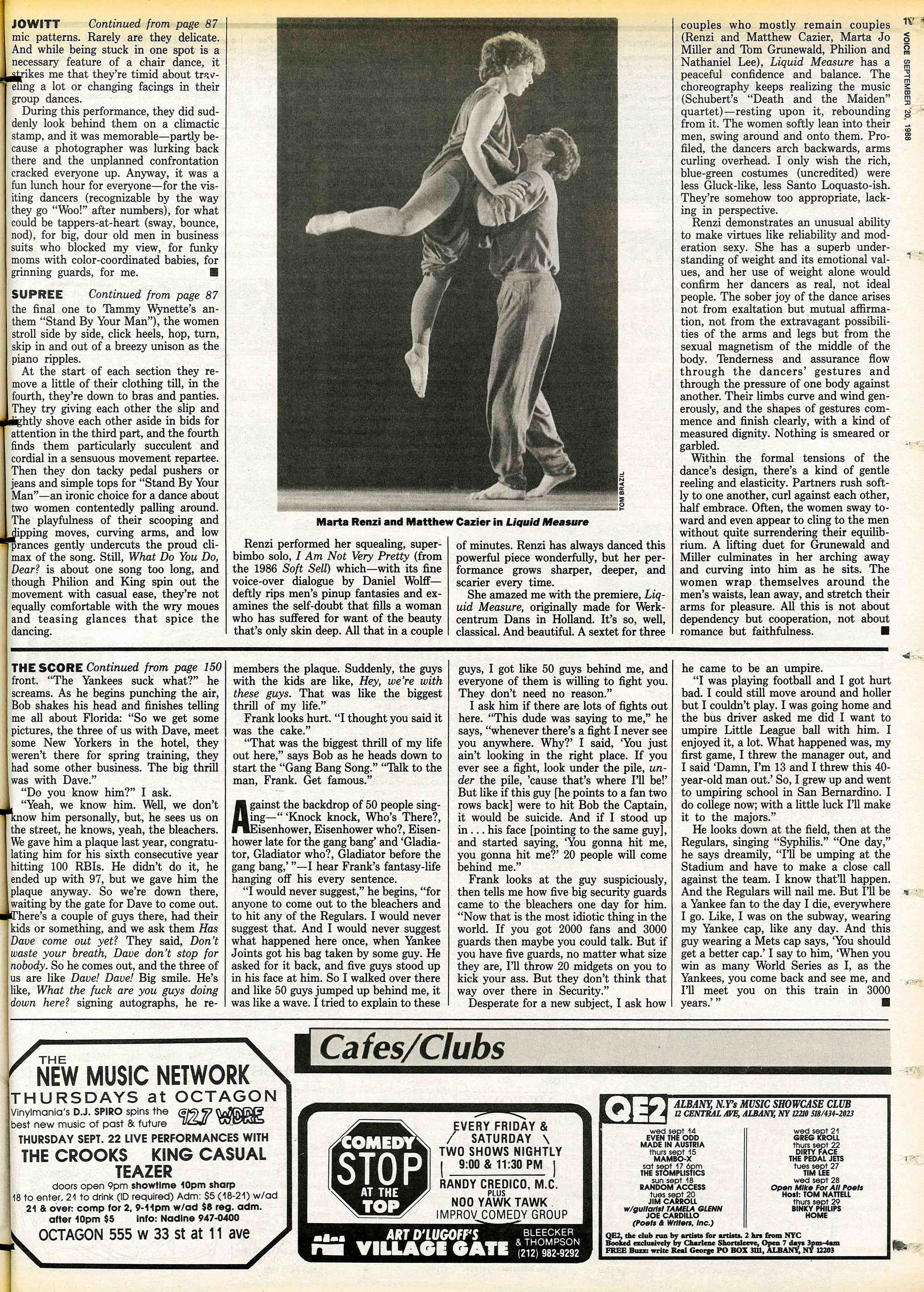 It’s such a soft, warm summer afternoon. I had this longing for watermelon and pineapple, and fortunately you live across from a big, sparkling grocery store. So here it is, though I already had two of the peaches on the way up. The radio’s on in your kitchen. Radios on summer days always sound like they’re in the blue sky, talking in the air: “How’s the traffic out there? It’s going to be a hot one gearing up for the game tonight.” Whatever game—there’s always a game. I have a radio in every room. I’m a huge Mets fan. I was a Yankee fan, at the time when Ricky Henderson and Dave Winfield played. That’s going to date me. I’m so young, 26.

Do you sit and watch the radio the way people used to? No, I try to read one book a week, but they’re mysteries. It’s a huge escape for me. Owning my own business is really stressful. Before the showroom, I was the director of Sara Meltzer Gallery and worked Sundays in the flea market on Broadway and Grand—two years, rain or shine, 16 hours a day. I’ve been in this apartment a year. It’s not my dream apartment but I couldn’t love this neighborhood more—the laundromat, the cat clinic.

Why are all the buildings blue? My landlord paints them. I don’t know why. He’s Mr. Cabbad—Mr. Personality. He sits in his store across the street. He has photos of himself and politicians, Christmas cards from the Bushes. I love him. You go in. He always says,”What apartment are you in?” I can’t imagine how old he is, 70 at least. I got the apartment from these stupid brokers. They were totally inept. One was on a mountain bike. The other guy, we just took buses. They were so young and inexperienced. They barely tried to sell me the place because they thought I wouldn’t bite at the price. This is my thermos collection. I have a group in each room. A few years ago, I wanted something desperately to collect, to hold on to. I don’t know why. The orange and yellow are in the kitchen; the bathroom has blue. No one ever appreciates the designs behind them. Thermoses are under-recognized.

I was thinking about the men who took the thermoses to work. That silver one—a steelworker. He would have bologna sandwiches. To me, thermoses mean fishing with my father. We used to go fishing for—I don’t even know what we went fishing for. Maybe bass. I’m from Schenectady. I’m an only child. My dad’s 47. He graduated college when I was nine—the happiest day of my life. My parents met in the print room at General Electric, where he works. My mother used to work in a lunchroom. For my father’s birthday, I got them a room at the W Union Square, then I took them to Peter Luger’s for dinner.

Will you always live alone? Probably. I have my cats, Dottie and P-nut. I’m a cat lady. And I didn’t run out to find a boyfriend when 9-11 happened. I worked harder on my company. I see myself in this apartment for a while. Nothing’s going to be cheaper.

[We discuss terrorist warnings—this was one of the nervous weeks of “Will I disappear in the epicenter or just languish in a nuclear winter, crawling on the sidewalk with radiation sores and two shoes that don’t match?”] Warnings like that don’t even hit my radar screen. I’m just too busy working. I’m a trained boxer. Someday I’m going to fight Ali’s daughter. I’m going to take her down.

I’m going to visit Mr. Cabbad now. Goodbye. [I called her later: “So he was sitting in a chair in an aisle of his store with the Hawaiian shirts, socks, and brassieres, and he said the reason he paints the buildings blue is to ‘keep the bad eye away.’ He’s been there 40 years, has 40 tenants. He’s from Syria and he’s the founder of the Arab American Parade Committee. When I asked him if he was scared because of recent international events, he said, ‘Nah, I’m a tough guy. That CIA, they should have grabbed those guys by the @&**#! There’s a saying in Arabic: Don’t talk too loud, the walls have ears.’ “]