North of New York City, close to the Pennsylvania border, old-school restaurants like Sharkey’s, Lupo’s, and the Spiedie and Rib Pit have championed the humble spiedie for decades.

Popularized by Endicott and Binghamton’s working class Italian immigrants in the 1930’s, the grilled meat was traditionally served on a skewer with a slice of fresh bread on the side, and prepared most often with small pieces of lamb. But the city’s meaty legacy has evolved into something closer to a proper sandwich, loaded with pieces of meat already pulled off the stick (and the meat of choice now tends to be chicken or pork).

That’s how you’ll find it at Brooklyn Bird in Clinton Hill, a fast food joint that opened last December. The tangy chicken spiedie is $4.50, the meat stuffed in a very soft hot dog roll, glued together by the addition of sliced, half-melted American cheese.

Cooks can be quite secretive about their spiedie marinades, which must be left to work at the meat for many days before it’s grilled. Brooklyn Bird tells Fork in the Road that theirs is mostly lemon juice and fresh herbs. And after three days in the stuff, the chicken is good to go.

[Note: Endicott has been added to this post as well as to Fork in the Road’s upcoming spiedie-themed road trip itinerary.]

Yes, there’s a burger in there somewhere.

The elk is a mighty animal. Also known as wapiti, it’s really a very large species of deer, native to North America and East Asia. Males of the species have magnificent horns, which are shed every year, and these horns are often used in traditional medicines. Male elks make their presence known by issuing loud screams, known as bugling. Female elks gestate around 260 days, and produce calves averaging 32 pounds, usually only one at a time. Why is FiTR telling you this? Because now you can eat elk at restaurants. 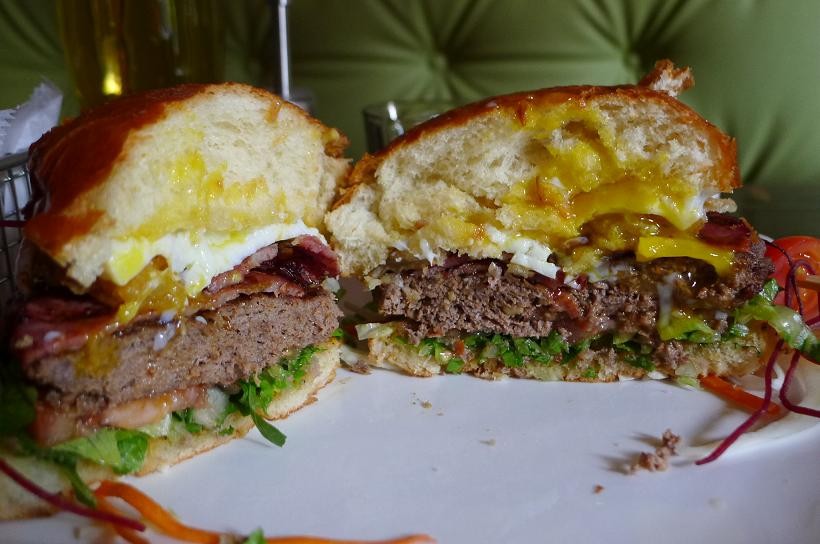 In general, serving wild game in New York restaurants is still illegal. But elk is farm-raised in states like Pennsylvania, Wisconsin, and the Dakotas. Sometimes the herds are grazed on the prairie grasses, sometimes – in the case of Pennsylvania – fed a diet of oats. Nomad Acres (sounds like a good sitcom subject, right?) feeds its herd grains, and describes the resultant flesh as “healthy, sweet meat.” Elk flesh is also exceedingly lean. Are you fat-o-phobes listening? 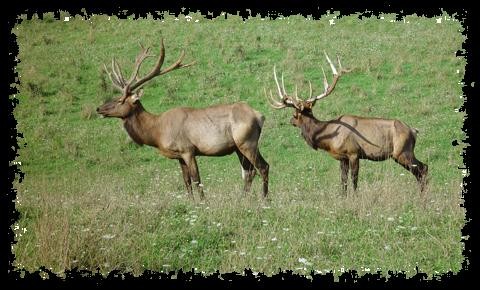 Smokey Burger Organic recently debuted in the Theater District, a burger joint that specializes in patties made from game. The deep narrow space has rustic lumber walls, and you can almost feel like you’re eating in a hunting lodge. The menu offers the usual beef, turkey, and lamb burgers, but for novelty junkies, there are ostrich, buffalo, duck, and elk choices, too. Since the elk seemed the most extreme, that’s the one we went for.

While you can get the more exotic patties in simple burger presentations, the bill of fare is intent on offering them in elaborate settings. There may be a reason for this. The elk burger, called the Big Boss Armando ($18.95), comes on a brioche bun with lettuce, tomato, turkey bacon, a runny fried egg, two types of cheese, and fried onion rings, right in the sandwich. With all that glop, who can even taste the elk?

We asked them to hold the cheese, and made a point of nipping off small pieces of the elk patty for taste purposes. The patty was rubbery, but boldly flavored, not exactly like beef, but not unlike it either. If we’d expected a slightly gamy flavor, that could be detected, too. The patty seemed to contain almost no fat. It also tasted as if it had been frozen, and the time it took for the burger to arrive at the table seemed to confirm that.

Really, not a bad burger, though you probably could have put a urinal cake in that setting and it wouldn’t have made much difference. 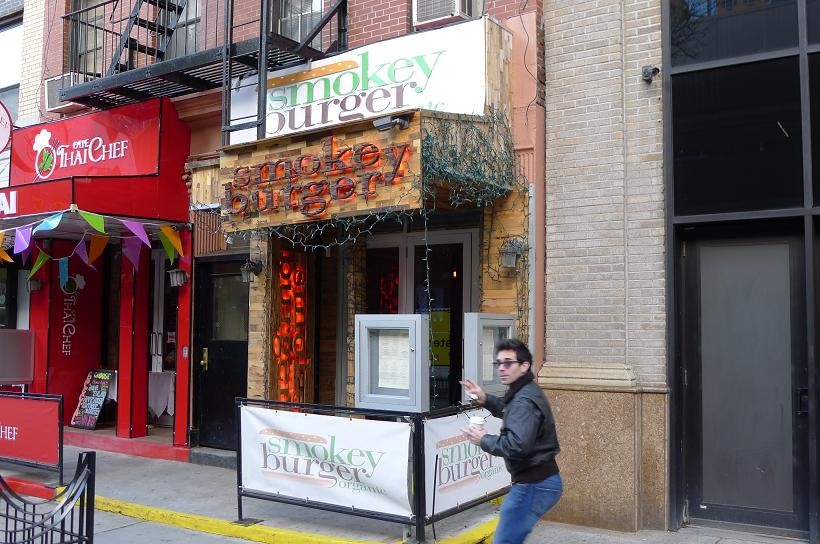 The outside is somewhat camouflaged.

Is this man the inventor of Coca-Cola, or just an unpopular Confederate general?

Over in the Wall Street Journal, Mike Esterl takes a look back at Doc Pemberton, the 19th-century chemist credited with inventing Coke.

Though Pemberton died in 1888, his character was plucked from obscurity by Coca-Cola’s marketing department a couple of years ago. Now his verified Twitter account, where he comments on such topics as modern mustache culture and fashion through the ages, has over 100k followers. (If he were actually still around, Pemberton might be less concerned with the mythology of Coca-Cola and more with #cocainelacedwine, but never mind that.)

Esterl does some digging into the controversy of Pemberton’s actual image, the one used by Coca-Cola (seen above left) and finds that a totally different image — one of a thin, vaguely creepy, balding man — may in fact be Coke’s real inventor . . .

In an interesting piece for Slate, Maryn McKenna remembers the man who invented chicken nuggets. Robert C. Barker grew up during the Depression and went on to become a game-changing professor of poultry science (seriously!). He processed chicken and egg to produce nuggets and other convenient, calorie-rich foods at a time when the American poultry industry needed a serious makeover.

“Baker’s prototype nugget, developed with student Joseph Marshall, mastered two food-engineering challenges: keeping ground meat together without putting a skin around it, and keeping batter attached to the meat despite the shrinkage caused by freezing and the explosive heat of frying.”

Barker published his notes on the process in 1963, 18 years before McDonald’s would roll out their similarly processed nuggets, but he’s rarely credited for the invention. As McKenna points out, given the reputation of nuggets these days, maybe that’s not so bad.

Why does everything taste like chicken? Well, there’s actually an answer for that. Slate traced chicken back to its evolutionary origins and found that chickens and other birds are probably the direct descendants of dinosaurs.

And other than birds, the closest living relatives that we have to eat are crocodiles, which date back to at least 250 million years ago.

The author goes back even further and finds that the common denominator is a group of animals known as diapsids, which originated around 300 million years ago. Modern reptiles are both descended from the diapsids.

So roughly 350 million years ago is probably when life began to taste like chicken, right when some lobed fishes had fully transformed into the first terrestrial amphibians, like P. finneyae.

Burger King is introducing a bunch of new chicken dishes for a limited-edition menu in the fall. It’s the largest chicken menu roll out in the company’s history.

The menu includes the chicken Parmesan sandwich composed of “tangy marinara, melted mozzarella, and Parmesan,” as well as popcorn chicken with eight dipping-sauce options. Other menu items include salad wraps, an Italian breakfast burrito, and a raspberry smoothie made with real fruit.

Insiders have compared the new menu roll out to that of McDonalds’s recent addition. But according to Darren Tristano, executive vice president at restaurant industry research firm Technomic, the menu isn’t reactionary to Burger King’s competitors. Rather, it’s a product of listening to its own consumers. 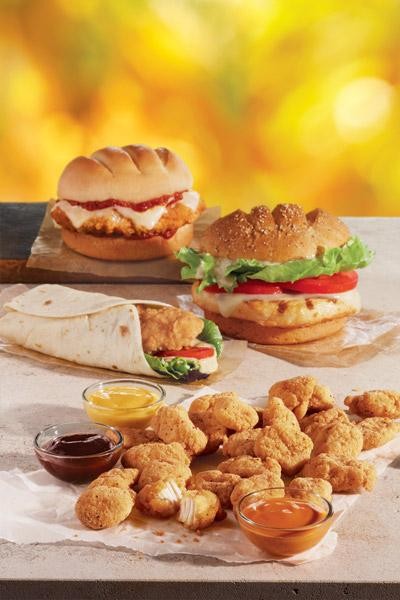 We’re a barbecue nation, but did you know Americans prefer chicken as their favorite barbecue meat?

The study also looked at what people considered the most all-American food. Apple pie took the crown with 28 percent of the vote, followed by hamburgers with 25 percent, hot dogs at 20 percent, and barbecue at 17 percent.

Four in 10 Americans think slow-smoked is the one true way to cook great barbecue.

The study was conducted online and reached a national sample of 1,050 American adults ages 18 and older. The margin of error for the total sample is +/- 3.1 percent at a 95 percent confidence level.

Welcome to 100 Dishes to Eat Now, the tasty countdown leading up to our “Best of 2012” issue. Tune in every day (weekends, too!) for a new dish from the Fork in the Road team.

Mole pipian is a pre-Colombian sauce native to southern Mexico made from pumpkin seeds, garlic, and dried chiles. It has a greenish tint, a nutty mild flavor, and is like nothing you’ve eaten before–assuming you’ve never tried it before.

Really, the ancient sauce is everything, and the boiled chicken thrown in is more to reassure you this in an actual meal than to improve the flavor. Anyway, there’s not much flavor left in the bird after boiling. Use the warm tortillas provided to scoop up the sauce, and throw in a piece of chicken or two as desired.

Photographer Peter Lippmann‘s portraits of jewel-wearing chickens and roosters for the latest issue of Marie Claire are both ridiculous and charming. I know I’m supposed to be mesmerized by all the shiny rocks from Cartier and Buccellati, but these birds have so much character that they steal the show. 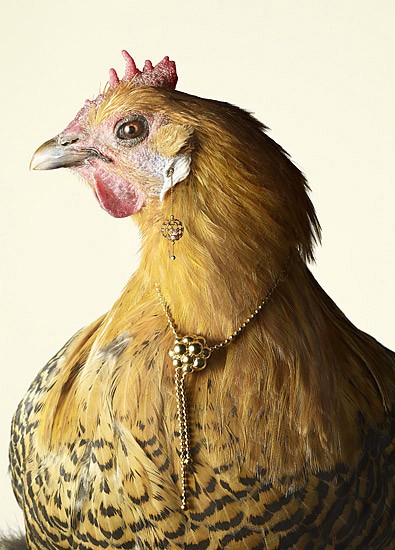 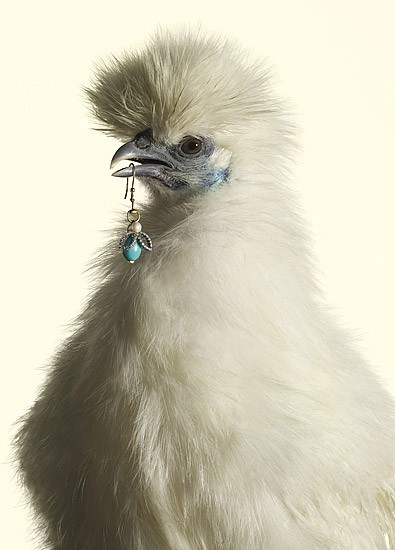 Read the most recent posts on our food blog or check our longer weekly reviews. Contact the writer at trao@villagevoice.com.

1 Ian Knauer shares his recipe for Marmite-and-melted-butter-slathered roast chicken. Bonus: you’ll learn how to harness the power of that underappreciated, umami-rich condiment in other dishes too. [Grub Street]

2 How the roast chicken, one of our oldest and simplest dishes, conquered the fine dining world, or the Roast Chicken Revolution. [Time]

That said, the chicken wings with garlic sauce come out quite good. Though this gravy tends to be over-sweet on every other protein, the salty, oily fat balances out this sugary vibe, making for a delightful juxtaposition.