In his 2006 memoir, You Must Set Forth at Dawn, the Nobel laureate Wole Soyinka posed this simple question about his countryman, and first cousin, Fela Kuti, the larger-than-life Nigerian bandleader: “How would one summarize Fela?”

For Erykah Badu, the answer is succinct: “Listen, all you need to know is…Fela Kuti is a f—ing genius.” This comes from her deeply personal liner notes for the brand-new Fela: Vinyl Box Set 4, which she has compiled for Knitting Factory Records, with additional comments from Afrobeat historian Chris May. Fela’s prolific career — which saw him imprisoned and beaten (repeatedly) by the police and military for his outspoken criticism of the government — spanned parts of five decades, from the 1950s to 1997, the year he died of complications related to AIDS.

His life and oeuvre has had a thorough and well-deserved going-over the past ten years in a variety of formats and venues, most famously in Bill T. Jones’s 2009 Broadway musical, Fela! That same year, Knitting Factory Records bought the rights to his entire catalog of recordings, and has released a series of limited-edition vinyl box sets, the first three curated by Questlove, Ginger Baker — who lived in Lagos for a time and played with Fela — and Brian Eno. Badu, for the latest set, has chosen a thrilling batch of seven LPs made up of Yellow Fever (1976); No Agreement and J.J.D. (both from 1977); V.I.P. (1979); Coffin for Head of State (1980); Army Arrangement (1984); and Underground System (1992).

The oft-shirtless Fela — taut, like a bantamweight fighter completely unafraid to take on bigger, more brutal opposition — had the kind of courage most rock stars of the time could only mimic. He began as a trumpet player and pianist while a student in late-Fifties London, but by the Seventies was mainly playing tenor saxophone and keyboards, singing lead vocals in pidgin English, and conducting his large ensemble, Africa 70. The band, anchored by drummer Tony Allen and his trusted baritone saxophonist Lekan Animashaun, was exceptional, especially its precise and powerful horn and vocal arrangements. This troupe may have appeared freewheeling, but it was, rather, steeped in discipline.

Fela released albums, often with the bold, immediate, equally fearless cover art of Lemi Ghariokwu, at a torrid pace — 24 between 1975 and 1977, according to Chris May’s notes — as if they were news dispatches. (In this new set, though, none of the vinyl is gatefold. For the titles that had gatefold art, foldout posters are included.) He was a kind of amalgam of James Brown, Bob Marley, and Sun Ra, with Ghanaian highlife and his own Yoruban touches, but who was under constant assault from the military government. “They beat the s–t out of me,” he said in the 1982 documentary Music Is the Weapon, before showing his most recent scars to the camera.

Erykah Badu has that sophisticated ear, and her selections for this set touch on many of Fela’s ongoing political and social concerns: standing up to a corrupt and brutal military regime; the scars of colonization; and Pan-African pride, all conveyed in lengthy pieces that often ran the whole side of a vinyl record. Musically, these albums bleed into one another, yet they never feel monotonous, as the arrangements remain original and spry.

On Yellow Fever, Fela sings of the ills of skin-whitening creams on the fifteen-minute title track, while on “Na Poi,” the thirteen-minute B side, he gets graphic, in pidgin English, about sex (more on that later). “I’m from the Bible Belt,” Badu writes, “where church attendance is high and self-esteem for Blacks is low. Sexuality is just too satanic to discuss openly and the darkest student in class keeps her mouth closed, while clutching a #7 light cream concealer.”

No Agreement is about his solidarity with the poor and disenfranchised. (On the flip side, Art Ensemble of Chicago trumpeter Lester Bowie, who visited Fela in Nigeria, takes a guest solo, in the all-instrumental “Dog Eat Dog.” It’s the perfect marriage of their diasporic sensibilities.)

On J.J.D. (Johnny Just Drop), Fela sends up Nigerians who studied or worked abroad and return home with affectation. He could have been one of those people. He came from a prominent family. His mother was an educator, his father was a minister and school principal, and his two brothers were both doctors, one of whom, Olikoye Ransome-Kuti, became Nigeria’s health minister (and subject of a 2015 short story by the novelist Chimamanda Ngozi Adichie). He studied medicine himself, then classical music at London’s Trinity College. He could’ve lived anywhere, done anything.

But, as Soyinka wrote, “Fela loved to buck the system. His music, to many, was both salvation from and an echo of their anguish, frustrations, and suppressed aggression. The Black  race was the beginning and end of knowledge and wisdom, his life mission to effect a mental and physical liberation of the race.” And as musicologist Uchenna Ikonne wrote in his excellent 2016 book, Wake Up You! The Rise and Fall of Nigerian Rock 1972–1977, “Inspired by the Black pride ethos then chic in American soul and jazz, Fela increasingly fashioned music around a pro-Black philosophy, fiercely advocating a celebration of traditional African values.” 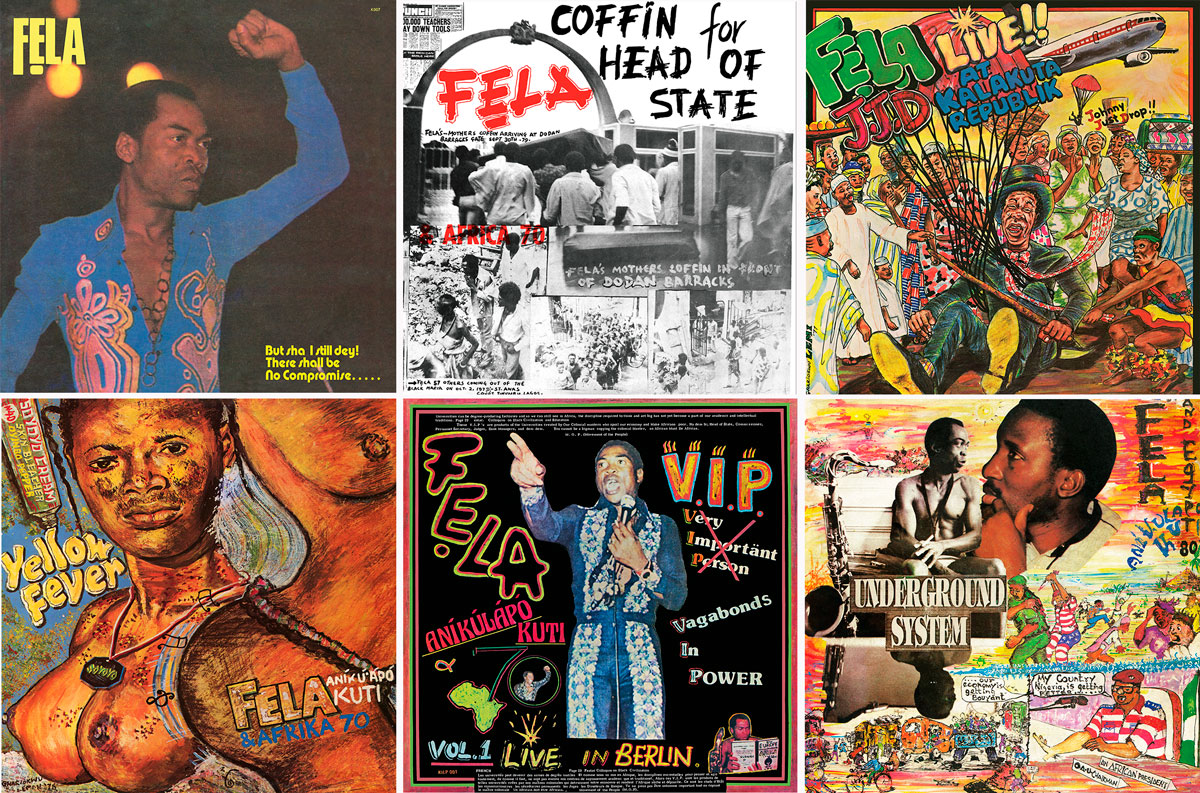 He eschewed bourgeois comforts and instead built up a commune in a teeming section of Lagos and called it the Kalakuta Republic, which housed his band, family members, a recording studio, and a health clinic. It was raided several times, including during a brutal attack in February 1977, when up to a thousand troops stormed in and fractured Fela’s skull, threw his mother out of a second-story window, raped women, and burned the compound down. His mother eventually died from those injuries, and one of Fela’s responses was the album Coffin for Head of State, a weighty piece where he sings, “Them steal all the money, them kill many students, them burn many houses, them burn my house too, them kill my mama.” Earlier in the song, he’s also equally critical of what both Islam and Christianity wreaked on Africa.

V.I.P. (Vagabonds in Power) was recorded at the Berlin Jazz Festival in 1978, the same year Fela married 27 women in a single ceremony. As pulsating as the set is, you can hear hecklers in the audience, who, according to May, were jazz purists that couldn’t take his saxophone playing (and in truth, he didn’t have the technique of the great American jazz saxophonists, though he did have his own voice) and a women’s group who didn’t like his “perceived attitude to women.”

The temptation, with lions like Fela, is, well, to lionize them. Uchenna Ikonne calls it “Fela’s beatification,” and while he’s clearly an admirer, he also refers to him as “the canny self-promoter.” But heroes aren’t necessarily saints. The Jamaican writer Lindsay Barrett, who moved to Nigeria and befriended Fela, wrote in The Wire in 1998, the year after he died: “His sexual appetite was legendary, and many young women submitted themselves to a life of virtual enslavement as he preached an ideology of chauvinistic control and established a lifestyle that was based on his theories of female submission.”

On Underground System from 1992 — with the band renamed Egypt 80 — he sang the praises of various African leaders, including the dictator Idi Amin, something Solinka noted in his memoir when he posed that question, How would one summarize Fela? “Merely as a populist would be inadequate. Radical he certainly was, and often simplistically so…. Only Fela would wax a record according heroic virtues to such an incompatible trio as Kwame Nkrumah of Ghana, Sekou Toure of Guinea, and — oh yes, indeed — Idi Amin Dada, the terror of Uganda.… There were no grays in Fela’s politics of black and white.”

Black-and-white politics, maybe, but his work, the music, was all color — rich, vivid color — that still radiates.

I’m an old-school fool who’ll steal a 45 (that’s a record, son) over a compact disc any night of the week, but when labels push lushly packaged CD compilations encompassing dope, hard-to-find original albums, I can only say, “Um, pretty please?” Such is the case with a long-overdue duo of two-CD sets that illuminate two master musicians who to this day continue to mess up genres and make music.

Years before Fela Anikulapo Kuti and his Afrika 70 juggernaut attained iconic status trailblazing Afrobeat throughout Lagos and the world (raising all sorts of hell in the process), another sax-playing Nigerian bandleader was already forging his own brand of booty-bouncin’ Afropop. True, here in the U.S., Orlando Julius Aremu Olusanya Ekemode is no household name (firstly, you’d need a sizable house), but to crate-diggers worldwide he has long been worth getting all dusty-fingered over. Julius began churning out breakbeat-laden singles in the early ’60s with his 10-piece band, the Modern Aces, and when in 1966 they birthed their first long-player, Super Afro Soul, he demonstrated his uncanny skills at bridging the Atlantic by mashing Latin percussion, high-life guitars, r&b horns, and a nascent funk attack—all particularly showcased on “Ijo Soul,” a song strikingly similar to James Brown’s mega-hit “I Got You (I Feel Good).” Which came first? Sorry, do your own homework.

Residing in Ibadan, Orlando used his orchestral prowess to attract musicians from all over, including one trumpet-wielding Fela Kuti. Fela, freshly returned from London and looking to get his own mojo working, frequently sat in, soaked up Julius’s juice, soon traded trumpet for sax, “borrowed” a few Modern Aces, and formed the Koola Lobitos, the band that would hammer out the sonic blueprint for Afrobeat before Fela’s infamous Afrika 70 officially catapulted it. This reissue seeks to steal a bit of that original mojo back; a second disc, subtitled Orlando’s Afro Ideas 1969-72, adds select tracks from Julius’s three subsequent albums.

Afrobeat, of course, would be nothing without its furiously distinct beat, and this beat would be nothing without its father, longtime Kuti cohort Tony Oladipo Allen. An octopus-like polyrhythmic machine, Allen was to Fela and Afrobeat what Melvin Parker/Jabo Starks/Clyde Stubblefield were to James Brown and funk: These drummers simply deepened and changed the pocket of popular music forever. Unlike JB’s funky drum corps, however, Allen (who had helped Kuti jump-start the aforementioned Koola Lobitos) successfully grabbed the spotlight by securing his own record deal, releasing four solo LPs from 1975 to ’79, the first three (Jealousy, Progress, and No Accommodation for Lagos) utilizing Fela as co-producer and sideman, the last (No Discrimination) self-produced with his own band, the Afro Messengers.

All four records are lovingly presented here. Because they’re mostly instrumental and lack Fela’s agitprop lyrics, Allen’s efforts were often dismissed by detractors as “Afrobeat-lite.” (Oh, you don’t like “Funky Drummer,” either? Okaaay.) But Fela’s obvious aesthetic—like Mr. Brown’s in all JB side projects—permeates each “song.” And the drumming? Well, one can only agree with Kuti’s proclamation that “Tony Allen sounds like five drummers at once,” able to paint the rhythms of juju, highlife, jazz, soul, and funk onto one glorious Afrobeat canvas.