The local authorities probably won’t believe it, but their best — perhaps only — friend since they arrested Lenny Bruce on an obscenity charge at the Cafe Au Go Go last Friday night is Lenny Bruce.

A petition drawn up by the newly formed Emergency Committee Against Harassment of Lenny Bruce, addressed to Mayor Wagner, challenges “New York City police and censors,” asking if ” ‘obscenity’ is the charge the public’s protectors have happily agreed is the best with which to silence an individual whose position, though popular with his audiences, is unpopular with an official minority?” And comedian Irwin Corey, who volunteered to go on in Bruce’s place at the Bleecker Street coffee house on the night of the arrest, devoted nearly all of his hour-and-a-half talkathon to the subject of “cops.” “A cop,” said Corey, “is an amoeba,” and the Village is a place “surrounded by precincts.”

But all Lenny Bruce will blame is the ‘mores or the times.’ “I’m either behind or ahead of the times,” he explains with incongruous equanimity.

A couple of hours spent with Bruce, however, can be a pretty incongruous couple of hours. First, tagging along with him and his private-detective sidekick to the Fifth Avenue apartment of a prominent civil liberterian, for whom they play the tapes of the shows for which Bruce was arrested. Sitting in a comfortable chair surrounded by wall-to-wall carpeting watching Bruce, in his light blue pants and white shoes and tan suede jacket, sitting stiffly in another comfortable chair, deadpan, listening to himself on the machine. And then watching him get fidgety, though always attentive and polite, as the liberal lectures him on the history of the good fight against censorship in this country and explains that Bruce’s language stems from an anal fixation, when all he really came for was some specific advice on his own case.

Later, in his room at one of the Village’s less elegant hotels, where there is no carpeting, just blankets and miscellaneous junk on the floor, Bruce kind of nervously jumps around, occasionally flopping down on the messed-up bed with a law book, all his attention focused on working out the legal strategy to get him out from under the latest charge against him. His steadily mounting experience in cases like this has made him somewhat of a specialist on the subject. The whole scene is reminiscent of poet Allen Ginsberg spouting the expertise he accumulated in his recent battle with the City License Department for the right of poets to read their work in coffee houses. Here too the authorities are, if nothing else, succeeding in distracting an artist from his work and turning him into a legalist.

But when Bruce is finally lured out of his law book and into a more general discussion of his problems, there is no display of bitterness — against neither the police nor the law itself. In fact, Bruce displays more compassion for the police than just about anyone around the Village these days. “They die for less than $400 a month,” he points out. “And they’re ashamed of being cops. It’s a shitty gig.” He feels it isn’t fair to treat individual policemen as symbols. Newspapers, he says, depend too much on symbols. “When they talk about Alec Guinness they say he’s Chaplinesque. And when they talk about Peter Sellers they say he’s Guinness-like,” Bruce complained, shoulders hunched, hands in pockets, rolling his eyes toward the ceiling and looking exactly like James Dean.

Bruce’s quarrel is not with the law as written. He feels that the obscenity law as written and correctly defined does not inhibit his freedom of speech. He is confident that, as has happened in California, if his case has to go to a higher court, the words he has been hauled in on will not be judged obscene. The only fear Lenny Bruce has is “of running out of carfare to the Supreme Court.”

Bruce’s features have a strange quality of appearing both sharply defined and blurry, depending on the angle from which you look at him. And as you listen to him, you get the same uneasy feeling about his words, as though sometimes he is going too far for you to follow. Part of the problem is that his subtlety cuts though and goes beyond the liberal rhetoric we have come to depend on to identify a non-fink. As his friend remarked, “Lenny is fighting for the same things, but in his own way.” 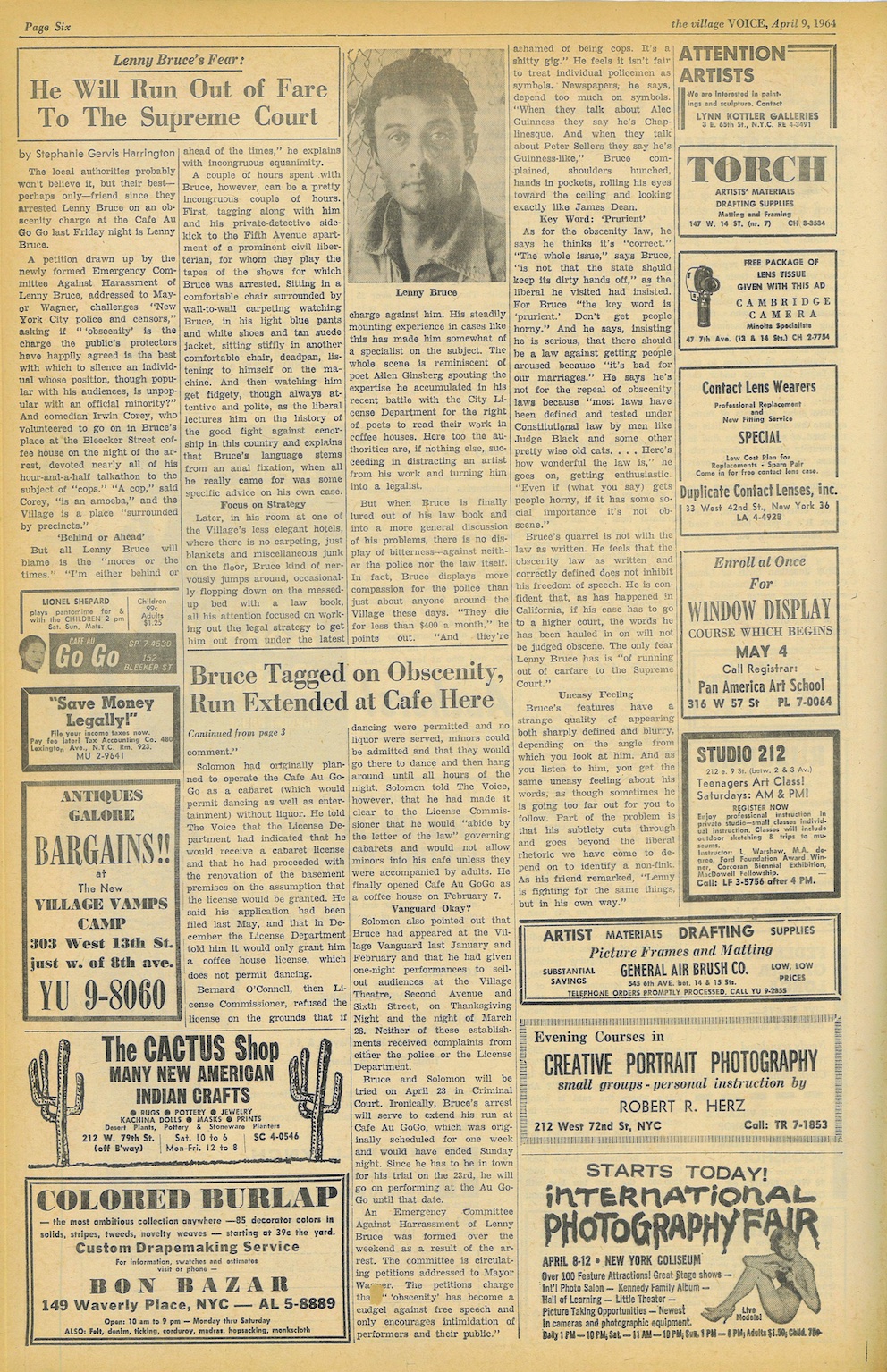 Comedian Lenny Bruce and Howard Solomon, manager of the Cafe Au Go Go, 152 Bleecker Street, where Bruce is heading the bill, were arrested and taken to Sixth Precinct headquarters on Charles Street last Friday night. They were booked on charges of giving an “indecent performance.” On arriving at the police station, Solomon was served with a summons from the License Department.

The arrests were made at about 10 p.m. as Bruce was preparing to go on for his only show of the night. When he failed to appear most of the audience asked for their money back and left. Comedian Irwin Corey, who was in the audience, went on in Bruce’s place.

Bruce and Solomon spent the night in jail and were released after arraignment the next day. Solomon was released in the rec­ognizance of his lawyer. Bruce, who has been arrested on obscenity charges in several cities and has one conviction on ap­peal in Chicago, had to post $1000 bail.

The two were told that the police had taped two of Bruce’s shows, his second show last Wednesday night (which actually began at 12:01 a.m. Thursday) and his first show last Thursday night. They were also told that the tapes had been played for a grand jury, which found that there was sufficient on which to charge them.

Solomon says the police told him that the original complaint about Bruce’s performances had come from the License Department. Acting License Commissioner William Barlow refused to comment on this. Instead he issued the following statement: “In view of the fact that a hearing is scheduled before this office on Thursday, there will be no comment on any phase until a determination has been made. We do not want to prejudice the case in any way by making any comment.”

Solomon had originally planned to operate the Cafe Au Go Go as a cabaret (which would permit dancing as well as entertainment) without liquor. He told The Voice that the License Department had indicated that he would receive a cabaret license and that he had proceeded with the renovation of the basement premises on the assumption that the license would be granted. He said his application had been filed last May, and that in December the License Department told him it would only grant him a coffee house license, which does not permit dancing.

Bernard O’Connell, then License Commissioner, refused the license on the grounds that if dancing were permitted and no liquor were served, minors could be admitted and that they would go there to dance and then hang around until all hours of the night. Solomon told The Voice, however, that he had made it clear to the License Commissioner that he would “Abide by the letter of the law” governing cabarets and would not allow minors into his cafe unless they were accompanied by adults. He finally opened Cafe Au Go Go as a coffee house on February 7.

Solomon also pointed out that Bruce had appeared at the Village Vanguard last January and February and that he had given one-night performances to sell-out audiences at the Village Theatre, Second Avenue and Sixth Street, on Thanksgiving Night and the night of March 28. Neither of these establishments received complaints from either the police or the License Department.

Bruce and Solomon will be tried on April 23 in Criminal Court. Ironically, Bruce’s arrest will serve to extend his run at Cafe Au Go Go, which was originally scheduled for one week and would have ended Sunday night. Since he has to be in town for his trial on the 23rd, he will go on performing at the Au Go Go until that date.

An Emergency Committee Againt Harassment of Lenny Bruce was formed over the weekend as a result of the arrest. The committee is circulating petitions addressed to Mayor Wagner. The petitions charge “that ‘obscenity’ has become a cudgel against free speech and only encourages intimidation of performers and their public.” 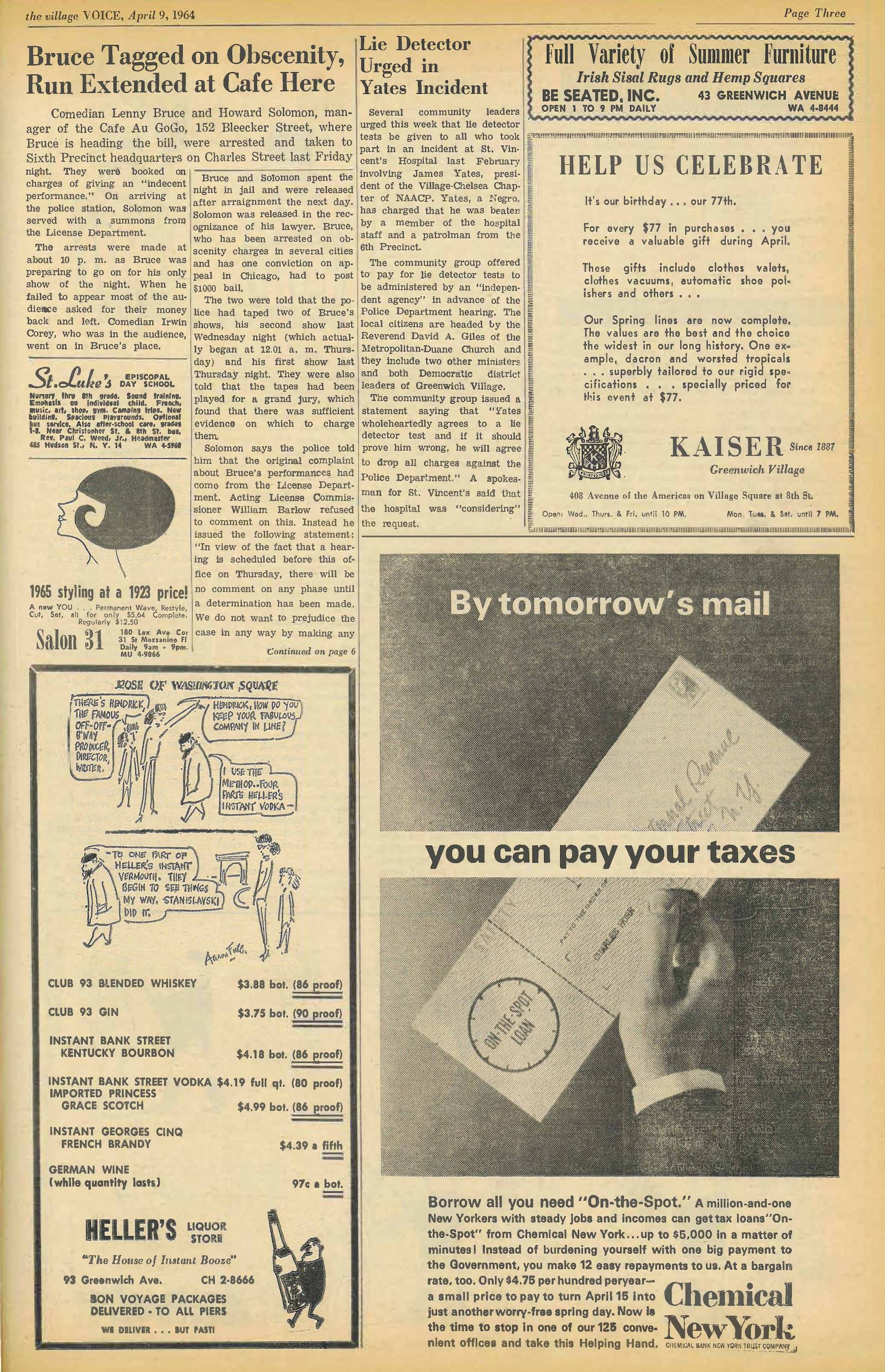