Copenhagen’s Iceage have yet to play stateside, but their reputation for unhinged, chaotic live shows precedes them, thanks in part to their meticulously maintained blog, where they post bloody photos of various band members, post-performance. No one in this quartet is older than 20, which means they’re far too young to have seen any of the Gravity Records–style post-hardcore bands their sound most resembles, but the facsimile can be eerie—certainly no act in this country is carrying on the legacy of the bygone, alternately melodic, and dissonant San Diego punk scene more faithfully. This Friday, they play their hotly anticipated New York debut as part of the L Magazine’s Northside Festival, alongside the local one-man wrecking crew that is Dominick Fernow’s Prurient—fitting, as Fernow’s moody, melodic work with his other band, Cold Cave, surely helped inspire Iceage’s similarly darkwave sound.

In 2005, the Village Voice‘s music editor, Chuck Eddy, its web editor, Nick Catucci, and their intern, Nick Sylvester, had the novel idea that the Voice‘s music section might become something more than a once a week proposition. The eventual result of this idea was something called Riff Raff, written by Sylvester, which updated at the revolutionary pace of one post per day. It was a free-for-all of bravado criticism, proto-SEO-baiting headlines (“Live: Gang Gang Dance Accept Blame for Cheney Shooting”), real interviews that read like they were fake (and vice versa), and instant reactions to sub-par Cam’ron dis tracks. Eventually, Nick and Chuck brought on a seven-foot tall Baltimore rap fan named Tom Breihan to write a second blog, which Tom called Status Ain’t Hood. Status, in its long run at this paper, trafficked in a wide-eyed love for hip-hop, inexplicably definitive opinions (“Pitbull: Better Than Nas”), and posts that ran to thousands and thousands of words, even when they were about zombies.

I loved both blogs, not least because they were written by two of my closest friends. So when, about a year after the demise of Riff Raff in 2006 (Status would hang on for a couple more years, prompting to Tom to claim at the end, “As far as I know, I’ve been blogging professionally about music longer than anyone on the planet”), the Voice‘s new web editor, Camille Dodero, invited me to write a weekly column for a new music blog she was starting–called Sound of the City, after the old concert-review print column in the paper–I said yes.

My column at the beginning was called “No Context”; Rob Harvilla, the music editor who replaced Chuck, titled his “Fuck A Blog.” Our conflicted enthusiasm for the enterprise thus broadcast, we proceeded to muddle through the next year or two before I too came on as an editor and Camille and I decided to make actual go of it. (Well, sort of; we left our bylines off at the beginning, in a move that split the difference between a desire for a consistent “house voice” and sheer embarrassment at half the things we were writing.) Eventually we put our names on SOTC and it became whatever it is today–thanks mostly to a bunch of great writers, too numerous to name here, whose bylines still show up day in and day out on the blog. I’ve been doing this for right around three years in one capacity or another and today’s my last day; I want to thank them, Rob, Camille, Nick, Tom, Chuck, Robert Christgau, and everyone else at the Voice, past present and future. Maura Johnston starts in this space in one week, and this place is lucky to have her.

Finally, thanks most of all to those who read this thing. Sorry about all those posts about that one BET freestyle in 2008, I just couldn’t really help myself. 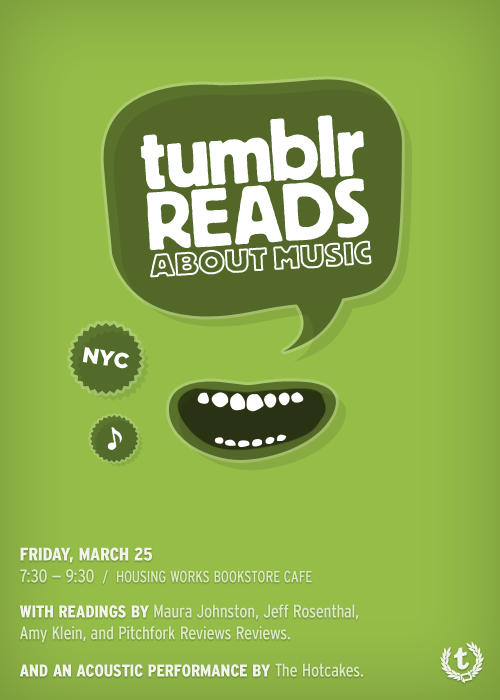 Exciting news: Our long awaited “Best Of…” app is finally here! Featuring more than 10,000 of the best things to eat, drink, buy, and experience in cities all across the U.S., the app is built from our annual “Best Of” issue and features recommendations on nearly every block in New York City. You can browse winners by category, neighborhood, or your current location, as well as keep track via Facebook of where you’ve been and where you’d like to go. Most importantly, it’s free — from iTunes, or by searching “best of” in the app store. Currently on the iPhone, but Android is coming in April, and if you happen have neither, you can access it on your mobile device as well, right here. Read more about it at TechCrunch, or watch our video primer below:

It’s one of our great regrets we were out of town the weekend SOTC pals Mr. Dream invited a bunch of people to put on ski masks and come rob their practice space while they were playing in it, but at least now we have the video evidence–shot in 1:1 security cam verité, no less. The song is “Crime,” the handsome face above belongs to drummer Nick Sylvester, and you can watch the whole thing right here, via Stereogum:

Mr. Dream plays 285 Kent this Saturday with Tony Castles; more info on that show here. And they’re still streaming their album, so if you haven’t indulged before, by all means:

On April 12th, Epitaph will release No Devolución, the sixth album from New Jersey basement warriors turned post-hardcore poster-children Thursday. Like their once-howling peers Cave In, the band’s increasingly gone the mellow route–more singing, less screaming, more atmospherics and space, less claustrophobic heartbreak. “There are definitely going to be at least a few fans that are like, ‘This isn’t what I want from Thursday,'” frontman Geoff Rickly told Spin last month. “Half the reason we picked the album title is because it means, in Spanish, ‘no returns.’ As in, ‘No returns, cause if you buy it, you got it!'” (The double entendre of title is surely no accident either.) First single “Magnets Caught In A Metal Heart” was a math-y, slightly mournful bit of post-rock that recalled both the Smashing Pumpkins and ’90s emo of the Piebald and Cap’n Jazz ilk; “No Answers,” which we have below, is a more reflective, keyboard-heavy affair, alternately fatigued and pleasantly nostalgic–two modes that suit a band that’s been doing it as long as Thursday has.

The band cites, as usual, a couple literary totems as inspiration for No Devolución–Cormac McCarthy and Don Delillo–whose expansive and removed modes seem about right for the record; doing a split with the Japanese post-rock outfit Envy a few years back probably didn’t hurt either. Mia Pearlman-designed cover and the record’s tracklist, right here: 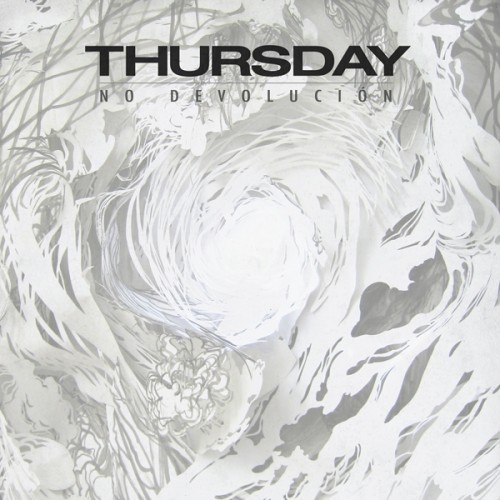 One of the happiest of the many stories to get lost in the maelstrom that was Kanye West’s 2010 was the rehabilitation of Pusha T, perhaps the single most critically beloved and commercially unsuccessful rapper of the last five years. The Clipse, his duo with his brother Malice, had sat on the shelf for four long years following the release of 2002’s Lord Willin’, scrapping at least one putative album and releasing several furious mixtapes in the process; when Hell Hath No Fury finally came out, it was hailed as a masterpiece…then sold all of 36,000 copies its first week out. 2009’s Til the Casket Dropped was a disappointment, as were the mixtapes that bracketed it–after years of fighting an industry that couldn’t figure out a way to make them stars, it seemed like these once vital rappers had lost both their will to struggle and their creative spark. Until, that is, Kanye scooped Pusha up last year, putting him on My Beautiful Dark Twisted Fantasy‘s finest single, “Runaway,” and signing him to his G.O.O.D. Music imprint (and, among other things, bringing him to last week’s SXSW). Pusha responded by promptly returning to making great music, or something close to it; listen to the vintage-sounding Pharrell production “Raid,” with 50 Cent, for instance:

That song, like the handful of other singles Push has released in the past month, are from Fear of God, the solo mixtape the rapper finally let go in full earlier today. We’re partial to the whole “security blanket of cocaine, I am Linus” Charlie Brown reference on the Rick Ross-featuring “I Still Wanna,” but you will have your own favorites. There are those who will wish Pusha could find other things to rap about than the drug trade, if only because Kanye’s emo mode seemed to bring out something new and vulnerable (or, alternately, vengeful) in him, but we’ll take new music from the guy any way we can get it.

Another SXSW is in the books, granting great relief to those of us who were just subjected to five straight days of partying-related Twitter updates, and great sorrow to those who became accustomed to the 80 degree weather and not getting snowed on in freezing cold New York City. But all things must come to an end, even for Odd Future’s Tyler, the Creator, who had to go home to his mom’s house like all the rest of Austin’s expatriate population come Monday morning. Our recap of the actual festival is to follow; in the meantime, intrepid photographer Rebecca Smeyne was there and brought back photos. Many involve people breaking things in convention centers (or maybe that’s just Das Racist?). Either way, her selected photos are below (you can see the rest in full at our at our slideshow):

We’d heard rumors of this last week, and yesterday, the band made it official–Hoboken humanitarians and all around good humans Yo La Tengo will be playing a hastily organized benefit for Japan this Wednesday at Maxwell’s. Tickets are $50 (buy them here starting at 10 a.m.), but every cent, including the fees, goes to Peace Winds Japan. From the group’s announcement:

This just in . . . we’re going to play at Maxwell’s on Wednesday, March 23. Tickets will be $50 and all proceeds will go to Peace Winds Japan. The show will start at 9 pm. No other bands, but we’ll see if we can find something to put up our sleeves (please don’t hold us to that). Due to the short notice, tickets will be available exclusively on line, starting at 10 am EDT Monday March 21, through Ticketfly, who have generously offered to donate all of the fees to Peace Winds Japan.

Last time these guys played music live it was to benefit WFMU a couple weeks back–so when you see Ira Kaplan on the street, give that man a hug.

Once, he infiltrated Michael Bolton’s house, where he proceeded to photograph the innocent singer’s Scrabble board and College Dropout platinum plaque. At least one regular reader was moved to write an entire song in tribute, the first line of which was: “WHAT? HARVILLA PROMOTED ANOTHER MILLIONAIRE?” He called his long-running print column “Down in Front” because he was indeed tall and difficult to see over at shows, and felt bad about that fact. Da Capo gave him both awards and honorable mentions; a not insignificant number of pieces he edited went on to win more of the same. His office couch was comfortable, his kindness legendary, and now, five years after showing up here from the hinterlands of California, he’s headed back. We’ll miss you Rob. And since your fame is sure to be more enduring than MIMS’, let’s all just pretend you drafted this nifty graphic with yourself in mind and remember it forever. From left to right, all together now: 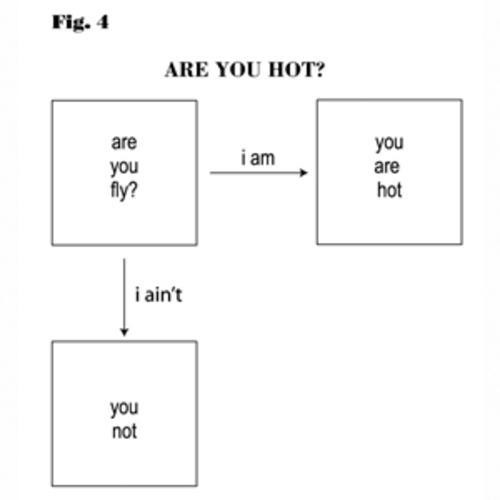 Take care, buddy. This office will not be the same without your Chinese Democracy liner-note readings, your inexplicable defenses of worthless bands like Phish. If you need us, we’ll be over here weeping and listening to this: