“I Thought Everyone Was Kidding”

Andy Warhol is alive and well. Last Thursday, accompanied by the inevitable coterie of business associates and superstars, Warhol went out on the town. It was the underground film-maker’s first public appearance since last June, when, as everyone knows, he was shot down by Valerie Solanas, a writer who had played in his film, “I, a Man.”

We were sitting around a table at Casey’s Restaurant. Viva, reigning superstar, and Paul Morrissey, Warhol’s producer and technical director, were regaling their chief with tales of recent assaults upon their persons.

“We are constantly under attack,” claimed Viva. Very charming she is, and plenty paranoid: “Andy’s shooting was part of a conspiracy against the cultural revolution. Recently a man leapt over three empty rows in a cinema and punched me as hard as he could.” Viva’s vexed, misunderstood expression made everyone laugh. “It was during the greenhouse scene of ‘Amities Particulieres’ and I giggled and said, ‘Gay among the gladioli or faggot among the ferns.’ It was supposedly a sensitive homosexual film — so tacky.

“I was also attacked in my apartment the other night” — she went on in a Holly Golightly monologue — “by someone whom I had never before seen. It turns out he’s a professional attacker. All he does is beat up people. I really did a job on him. I think I fractured his skull. I’ve never seen so much blood…”

“Well, it’s our year for crazy people. It really is,” observed Warhol, wincing as though in pain.

“Feel all right?” asked the reporter.

“Have you rethought your lifestyle since the shooting?” asked the reporter.

“I’ve been thinking about it,” conceded Warhol. “I’m trying to decide whether I should pretend to be real or fake it. I had always thought everyone was kidding. But now I know they’re not.” He looked worried. “I’m not sure if I should pretend that things are real or that they’re fake. You see,” said Warhol, craning his head absently, “to pretend something’s real, I’d have to fake it. Then people would think I’m doing it real.”

“Do you think you had any complicity in the shooting,” persisted the reporter, “in the sense of encouraging those around you to act out their fantasies?”

“I don’t know,” Warhol replied, denying that he had ever encouraged anyone to act out his fantasies. His voice trailed off. “I guess I really don’t know what people do. I just always think they’re kidding.”

Were his stars actually shooting dope in “Chelsea Girls”?

“I never really knew,” he insisted. “I suppose they must have been. I thought they were kidding.”

Did he think Valerie Solanas was kidding when she shot him?

Warhol shrugged and said his back was turned at the time. He had known Valerie Solanas four years. At first, when she showed him her manuscript “Up Your Ass,” he had thought she was a lady cop. Later, he had come to regard her as a serious writer, but he had sensed that she was disturbed so he avoided her. Sometimes she would telephone him late at night. Her nocturnal nagging was in the nature of crank calls. Once, when she needed money, Warhol had used her in a film. She never complained that she was ill-used.

Valerie Solanas’s grievance, Warhol learned too late, was that she imagined he had conspired with publisher Maurice Girodias to defraud her of her works. Girodias had in fact given her an advance to write a book, but the publisher barely knew Warhol and had no business dealings with him. Now Valerie Solanas is in a mental institution.

“It happened so quickly,” Warhol recalled. “She met me downstairs and we rode up in the elevator together. I turned around and it sort of happened…”

“Oh, it was a surprise,” Warhol said, “but the bigger surprise was that she had dressed up for the occasion. She wore lipstick, eye makeup, her hair was combed. And she looked so pretty in a dress…”

Warhol still likes Valerie Solanas: “I’ve never really disliked anyone. And I don’t think she was responsible for what she did. It was just one of those things.”

Wasn’t that the same as his thinking that everyone was kidding? Shouldn’t he be more angry and compassionate? After all, he had been badly hurt.

“Uh mmm,” Warhol hesitated. His dark blue eyes burned straight ahead. He spoke quietly as if his voice box were soundproofed. “I can’t feel anything against Valerie Solanas,” he said. “When you hurt another person, you never know how much it pains.”

Was he in pain?

“Uh mmm, the whole idea of the shooting was painful,” Warhol nodded. “It slows you up some. I can’t do the things I want to do, and I am so scarred I look like a Dior dress. I’m afraid to take a shower.” He giggled weakly. “It’s sort of awful, looking in the mirror and seeing all the scars. It’s scary. I close my eyes. But it doesn’t look that bad. The scars are really very beautiful; they look pretty in a funny way. It’s just that they are a reminder that I’m still sick and I don’t know if I will ever be well again.” Warhol fell silent. The clatter of silver and china filled Casey’s. So did small talk.

“Since I was shot,” Warhol went on, hypnotized by the central idea of his own resurrection, “everything is such a dream to me. I don’t know what anything is about. Like I don’t even know whether or not I’m really alive or — whether I died. It’s sad. Like I can’t say hello or goodbye to people. Life is like a dream. What would you call that?”

“Are you afraid?” asked the reporter.

“That’s so funny.” Warhol laughed as if to diminish his dread. “I wasn’t afraid before. And having been dead once, I shouldn’t feel fear. But I am afraid. I don’t understand why. I am afraid of God alone, and I wasn’t before. I am afraid to go to the Factory.”

Having spoken his fear, Warhol seemed relieved. He pulled a false mustache from his pocket and offered it to Viva who pasted it above her thin-lipped mouth. It was no good, he decided, and took it back.

“What now?” asked the reporter.

“I’m thinking about getting busy again — if I can do it,” said Warhol.

“With the same philosophical slant?”

“Do you laugh all the way to the bank?” asked the reporter, grasping at a realistic straw.

“For the first time we would have made some money this year,” Warhol said, “but my hospital bills took all of that. Our grosses are very big, but the net is practically nil. And we plow what we net back into our experimental films. But the Beatles have a lot of money and we’re trying to talk them into setting up a non-acting foundation for us.”

Then Andy Warhol and company walked to a party celebrating the completion of a Hollywood movie, “Midnight Cowboy,” where Warhol, insulated by two superstars, Nico and Ultra Violet, sat on a verandah and chatted with British screen director John Schlesinger. He talked about how quickly Hollywood films had caught up with underground films. He found himself beset with admirers. He seemed glad to be alive. ❖ 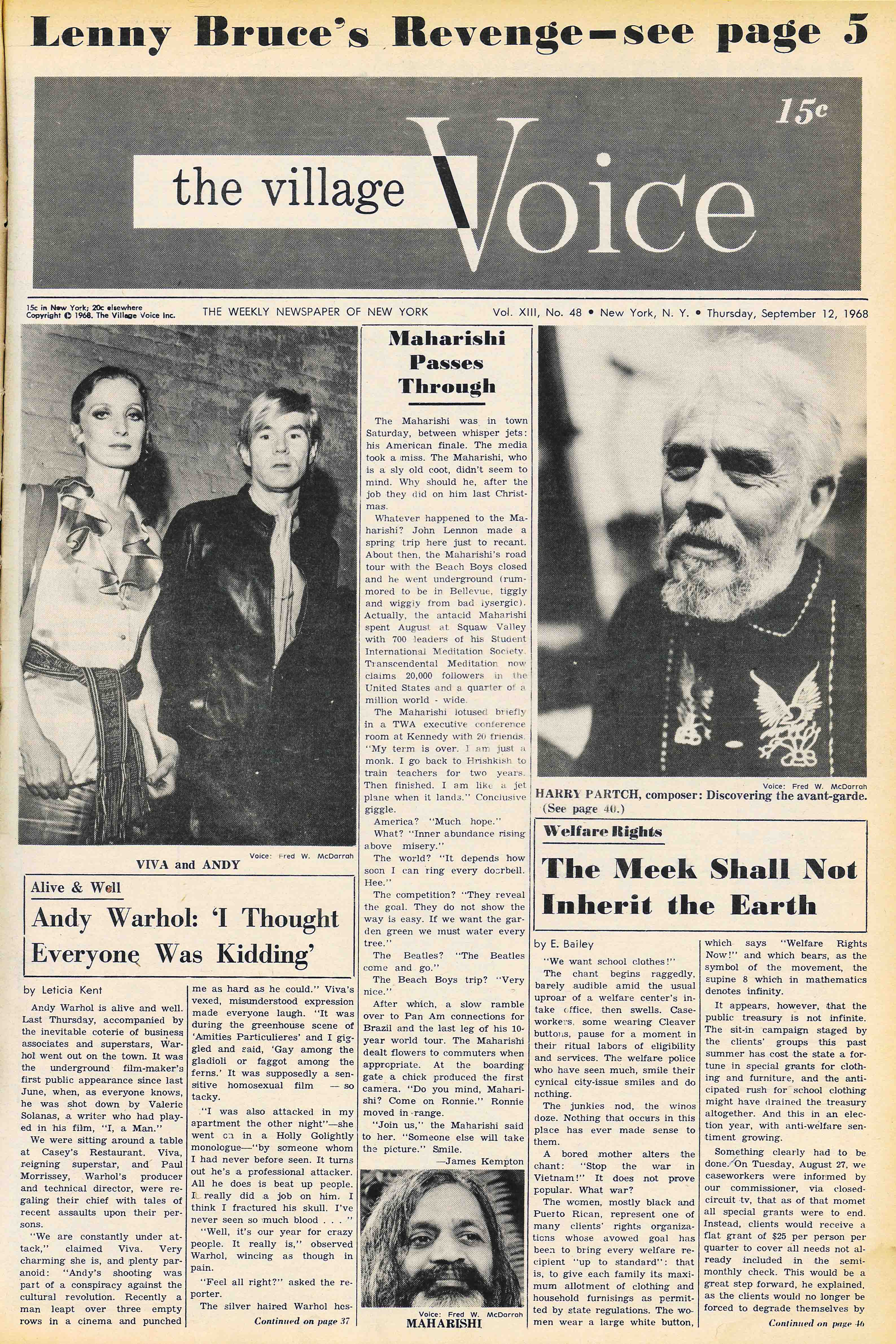 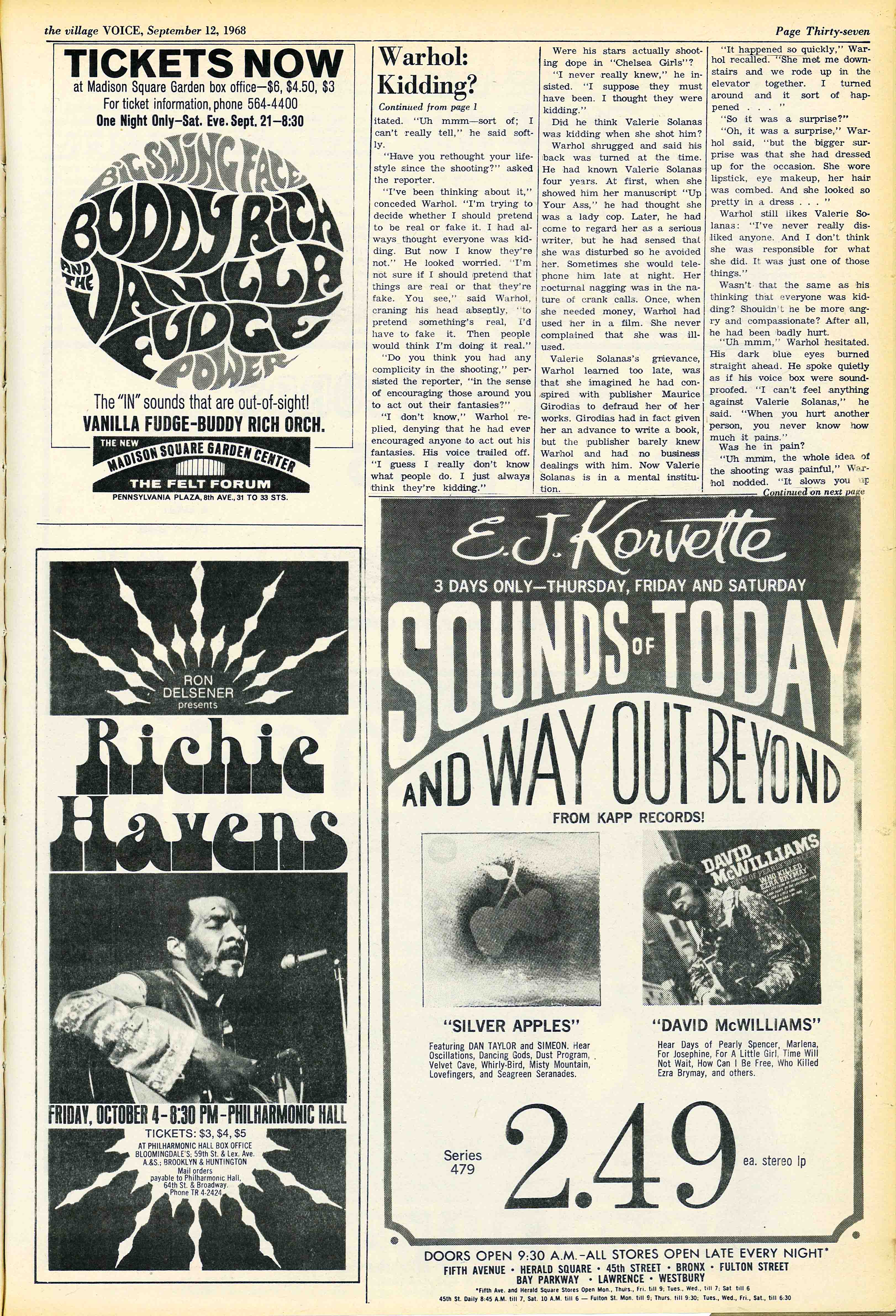 Saturday was a fair, gray day. At 11 a. m. the Anti-Imperialist Feeder March began to form in Washington Square Park. Its marchers, some 400 strong, had split with the Fifth Avenue Viet­nam Parade Committee because, according to an ad, “the Parade Committee leadership arranged for strike-breaker Lindsay, whose police regularly attack the black and Puerto Rican commu­nities and break up anti-war and Yippie demonstrations, to greet the anti-war rally in the Sheep Meadow.” So the dissidents — ­mainly Youth Against War and Fascism and the United States Committee to Aid the National Liberation Front — planned their own march.

As police and city officials met under the arch, plainclothes heavies massed on Washington Square North. Cheaply dressed, each cop sported a red hat pin and secreted a sap. City officials also wore hat pins. Tethered by Garelik’s glance, the plainclothesmen waited hungrily at the edge of things, ignoring the far-off challenges of their enemies and prey.

Aryeh Neier, executive director of the New York Civil Liberties Union, leaned against the arch and waited for the bust to begin. Earlier, Neier had sug­gested to Kriegel that the march­ers, two or three abreast, be given a sidewalk route. “You’re telling me what’s legal, I’m tell­ing you what’s practical,” responded Kriegel, who had evi­dently already decided on the bust. So there was nothing to do but wait.

At exactly 12 noon the march­ers hoisted their banners (“Poli­ticians lie — Vietnamese die”) and Vietcong flags, marched out to the sidewalk on Washington Square North, and turned west.

An aged police lieutenant with a bullhorn intoned a warning: “Atten-Shun! There are two authorized parades. This parade is unlawful, having no poi-mit. You are in violation of the law and subject to arrest.”

The cop with the bullhorn con­tinued to urge marchers to join the Loyalty Day Parade down Fifth Avenue or the Vietnam Peace Parade up in Central Park as plainclothesmen led by Assist­ant Chief Inspector Sidney Cooper seized some 50 demonstrators, slammed them against parked cars, and tossed them head first into paddy wagons. Other cops chased would-be marchers west on 4th Street and north on Seventh Avenue. They caught a few at Perry Street and beat them bloody. The plainclothesmen worked in teams, shielding their colleagues from the press while they pummeled their prisoners. One photograph­er was so carried away by the action that he joined the police in seizing a demonstrator. Aryeh Neier objected, and he too was arrested and thrown into a van. Kriegel watched Neier’s arrest, made a feeble attempt to stop it, failed, shrugged, and went back to directing the bust.

Within a few minutes some 80 persons were arrested and hauled off to various precincts. It took hours to book them and longer for arraignment. At 100 Centre Street, the cops, claiming the court rooms were filled, closed the criminal courts build­ing, denying access to attorneys and bail bearers. It took the DA to re-open the place.

On Monday the New York Civil Liberties Union called for a dep­artmental trial of Chief Inspectors Garelik and Cooper on charges of brutal conduct by plainclothesmen in dealing with the Anti-Imperialist marchers. The NYCLU also said it would bring suit in Federal Court against the Police Department for deprivation of civil rights in Saturday’s incidents and during earlier demonstrations.

“The Police Department be­haved abominably … with the active support and the agree­ment of the Mayor’s office,” said Neier. “Either Lindsay is poorly served by Kriegel and Gottehrer or he is complicitous.”

Neither the Mayor’s office nor the Police Department could be reached for comment. They were busy busting Columbia. 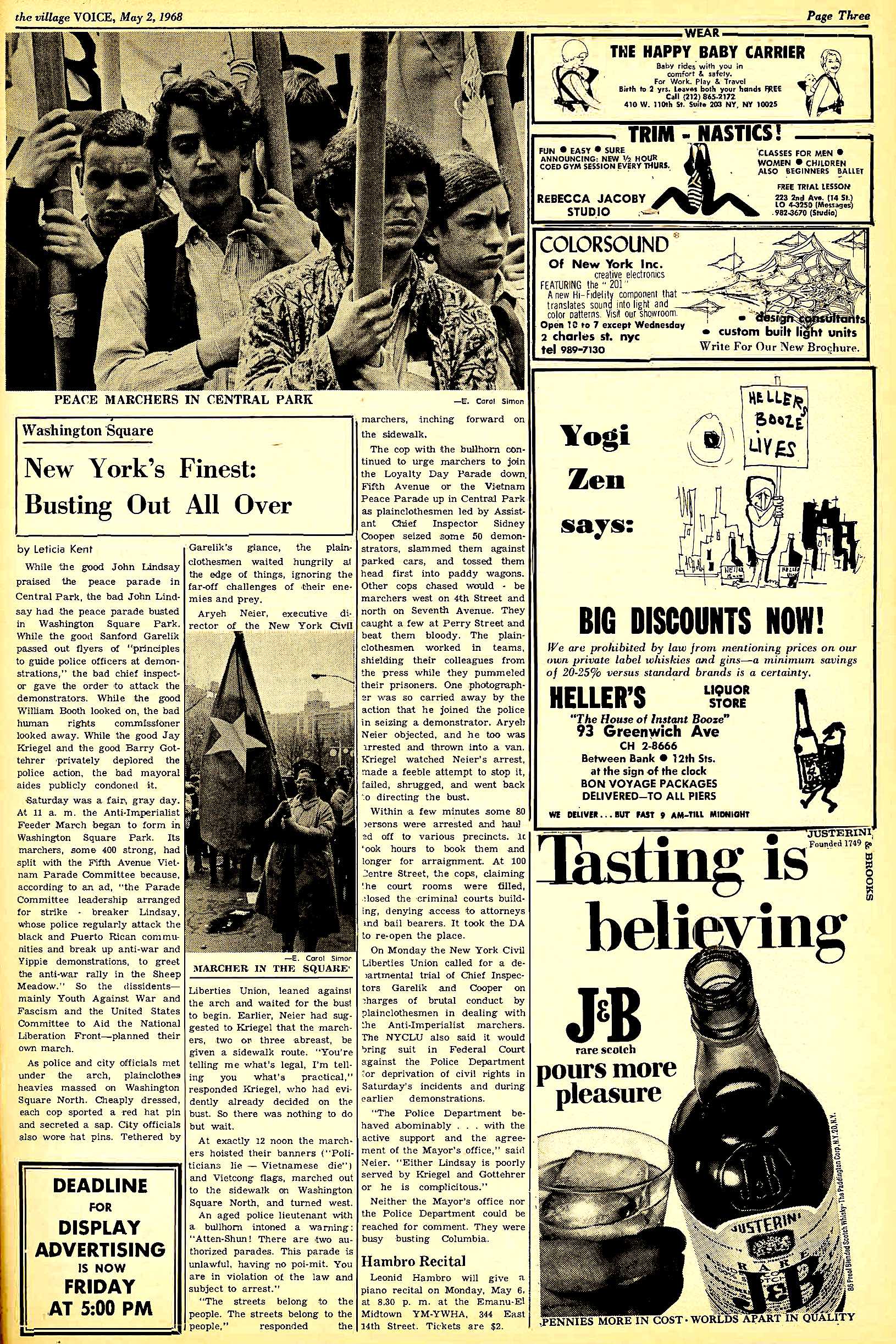