The Press of Freedom: A Column Open to Our Readers

I have been screaming at the National Institutes of Health since I first visited your Animal House of Horrors in 1984. I called you monsters then and I called you idiots in my play, The Normal Heart, and now I call you murderers.

You are responsible for supervising all government-funded AIDS treatment research programs. In the name of right, you make decisions that cost the lives of others. I call that murder.

At hearings on April 29 before Representative Ted Weiss and his House Subcommittee on Human Resources, after almost eight years of the worst epidemic in modern history, perhaps to be the worst in all history, you were pummeled into admitting publicly what some of us have been claiming since you took over three years ago.

You admitted that you are an incompetent idiot.

Over the past four years, $374 million has been allocated for AIDS treatment research. You were in charge of spending much of that money.

It doesn’t take a genius to set up a nationwide network of testing sites, commence a small number of moderately sized treatment efficacy tests on a population desperate to participate in them, import any and all interesting drugs (now numbering approximately 110) from around the world for inclusion in these tests at these sites, and swiftly get into circulation anything that remotely passes muster. Yet, after three years, you have established only a system of waste, chaos, and uselessness.

It doesn’t take a genius to announce that you have elected to personally supervise the study of a broad range of new drugs. Yet, two years later, you are forced to admit you’ve barely begun.

It doesn’t take a genius to request, as you did, 126 new staff persons, receive only 11, and then keep your mouth shut about it.

It takes an incompetent idiot.

To quote Representative Henry Waxman at the above hearings: “Dr. Fauci, your own drug selection committee has named 24 drugs as high priority for development and trials. As best as I can tell, 11 of these 24 are not in trials yet. Six of these drugs have been waiting for six months to more than a year. Why the delays? I understand the need to do what you call setting priorities but it appears even with your own scientists’ choices the trials are not going on.”

Your defense? “There are just confounding delays that no one can help… we are responsible as investigators to make sure that in our zeal to go quickly, that we do the clinical study correctly, that it’s planned correctly and executed correctly, rather than just having the drug distributed.”

Now you come bawling to Congress that you don’t have enough staff, office space, lab space, secretaries, computer operators, lab technicians, file clerks, janitors, toilet paper; and that’s why the drugs aren’t being tested and the network of treatment centers isn’t working and the drug protocols aren’t in place. You expect us to buy this bullshit and feel sorry for you. YOU FUCKING SON OF A BITCH OF A DUMB IDIOT, YOU HAVE HAD $374 MILLION AND YOU EXPECT US TO BUY THIS GARBAGE BAG OF EXCUSES!

The gay community has been on your ass for three years. For 36 agonizing months, you refused to go public with what was happening (correction: not happening), and because you wouldn’t speak up until you were asked pointedly by a congressional committee, we lie down and die and our bodies pile up higher and higher in hospitals and homes and hospices and streets and doorways.

Meanwhile, drugs we have been begging that you test remain untested. The list of promising untested drugs is now so endless and the pipeline so clogged with NIH and FDA bureaucratic lies that there is no Roto-Rooter service in All God’s Christendom that will ever muck it out.

You whine to Congress that you are short of staff. You don’t need staff to set up hospital treatment centers around the country. The hospitals are already there. They hire their own staff. They only need money. You have money. YOU HAVE $374 MILION FUCKING DOLLARS, FOR CHRIST’S SAKE.

The gay community has, for five years, told the NIH which drugs to test because we know and hear first what is working on some of us somewhere. You couldn’t care less about what we say. You won’t answer our phone calls or letters, or listen to anyone in our stricken community. What tragic pomposity!

The gay community has consistently warned that unless you move quickly your studies will be worthless because we’re already taking drugs into our bodies that we desperately locate all over the world (who can wait for you?!!), and all your “scientific” protocols are stupidly based on utilizing guinea-pig bodies that are clean. You wouldn’t listen, and now you wonder why so few sign up for your meager assortment of “scientific” protocols that make such rigid demands for “purity” that no one can fulfill them, unless they lie. And why should those who can obtain the drugs themselves take the chance of receiving a placebo in one of your “scientific” studies?

How many years ago did we tell you about aerosol pentamidine, Tony? This stuff saves lives. And we discovered it ourselves. We came to you, bearing this great news on a silver platter, begging you: can we get it officially tested; can we get it approved so insurance companies and Medicaid will pay for it (as well as other drugs we beg you to test) as a routine treatment, and our patients going broke paying for medicine can get it cheaper? You monster.

“Assume that you have AIDS, and that you’ve had pneumonia once,” Representative Nancy Pelosi said. “You know that aerosolized pentamidine was evaluated by NIH as highly promising… You know as of today that the delays in NIH trials… may not be solved this year… Would you wait for [an NIH] study?”

You replied: “I probably would go with what would be available to me, be it available in the street or what have you.”

We tell you what the good drugs are, you don’t test them, then YOU TELL US TO GET THEM ON THE STREETS. You continue to pass down word from On High that you don’t like this drug or that drug — when you haven’t even tested them. THERE ARE MORE AIDS VICTIMS DEAD BECAUSE YOU DIDN’T TEST DRUGS ON THEM THAN BECAUSE YOU DID.

You’ve yet to test imuthiol, AS101, dextran sulfate, DHEA, Imreg-1, Erythropoietin — all drugs Gay Men’s Health Crisis considers top priority. You do like AZT, which consumes 80 percent of your studies, even though Dr. Barry Gingell, GMHC’s medical director, now describes AZT as “a cumulative poison… foisted on the public.” Soon there will be more AIDS patients dead because you did test drugs on them — the wrong drugs.

ACT UP was formed over a year ago to get experimental drugs into the bodies of patients. For one year ACT UP has tried every kind of protest known to man (short of putting bombs in your toilet or flames up your institute) to get some movement in this area. One year later, ACT UP is still screaming for the same drugs they begged and implored you and your world to release. One year of screaming, protesting, crying, cajoling, lobbying, threatening, imprecating, marching, testifying, hoping, wishing, praying has brought nothing. You don’t listen. No one listens. No one has ears. Or hearts.

Whose ass are you covering for, Tony? (Besides your own). Is it the head of your Animal House, the invisible Dr. James Wyngaarden, director of the National Institute of Health (and may a Democratic president get him out of office fast)? Is it Dr. Vincent DeVita, head of the National Cancer Institute, another invisible murderer who lets you be his fall guy? Or Dr. Otis Bowen, secretary of the Department of Health and Human Services, no doubt the biggest murderer on the list; Shultz and Weinberger would never take such constricting shit from the Office of Management and Budget. All the doctors have continuously told the world that All Is Being Done That Can Be Done. Now you admit that isn’t so.

WHY DID YOU KEEP QUIET FOR SO LONG?!

I do know that anyone who knows what you have known for three years — that, to quote Ted Weiss, “the dimension of the shortfall is such that you can’t possibly meet our needs,” and, to quote the New York Times and their grossly incompetent AIDS reporter, Philip Boffey (whose articles read like recycled NIH releases): “Officials Blame Shortage of Staff for Delay in Testing AIDS Drugs” — I repeat, anyone who has known all this and denied it for the past three years is a murderer, not dissimilar to the “good Germans” who claimed they didn’t know what was happening.

With each day I realize a little more that the gay community has lost the battle. And that we haven’t begun to experience the horrors that still await us —  horrors even worse than you now embryonically signify. We have lost. No one important enough has ears. Or hearts.

You care, I’m told (although I no longer believe it). I’ve even heard you called a saint. You are in essence a scientist who’s expected to be Lee Iacocca. But saints, miracle workers, good administrators, brilliant scientists have imaginations vivid enough to know how to spend $374 million in a dire emergency. You have no imagination. You are banal (a word used so accurately to describe Eichmann).

Do I want you to leave? (Yes.) Could you’re replacement possibly be more pea-brained than you? (Yes, it is possible.) Will this raving do any good at all? Will it make Congress shape you up? Will it make my own communities bureaucratically mired AIDS organizations finally ask the right questions? (Judy Peabody of GNHC please take note.) Will Dr. Mathilde Krim ever — as she indicated she would — get the American Foundation for AIDS Research to fund the desperately needed and desperately needy Community Research Initiative, which is valiantly attempting to do what you should be doing, so tired we are of waiting for you to do it? (Leonard Bernstein and Harry Kraut please take note.)

I have no answers to most of these questions. You may (God help us all) be the best that will be given us. You may, like John Ehrlichman, once accused, seek redemption and forgiveness by rethinking, retooling, and, like Avis, trying harder. Even more miraculous, those Supreme Murderers in the White House might tomorrow acknowledge that families simply everywhere have gay sons and daughters.

But I fear these are only pipe dreams and you’ll continue to carry on with your spare equipment. The cries of genocide from this Cassandra will continue to remain unheard. And my noble but enfeebled community of the weak, and dying, and the dead will continue to grow and grow — until we are diminished. 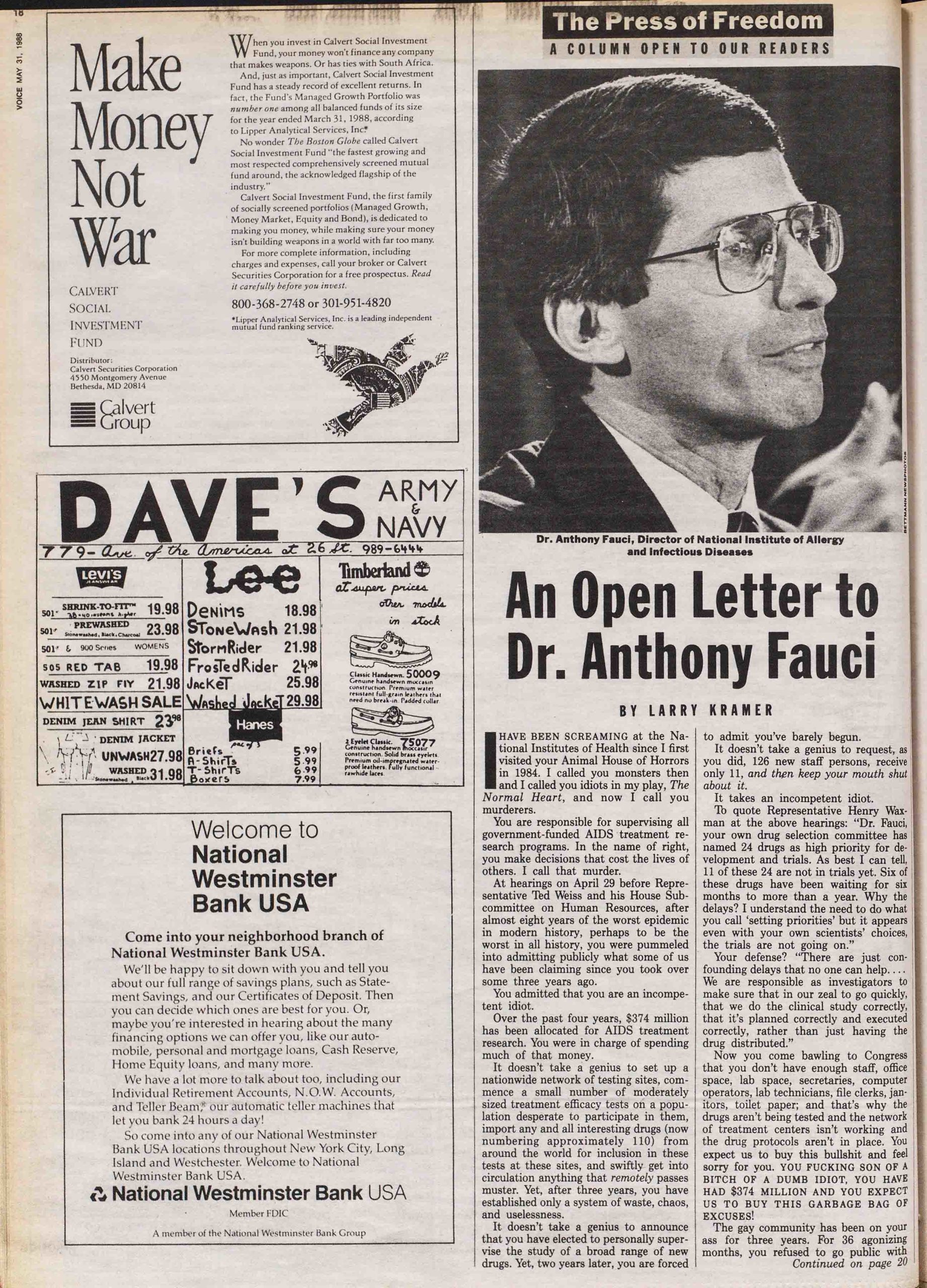 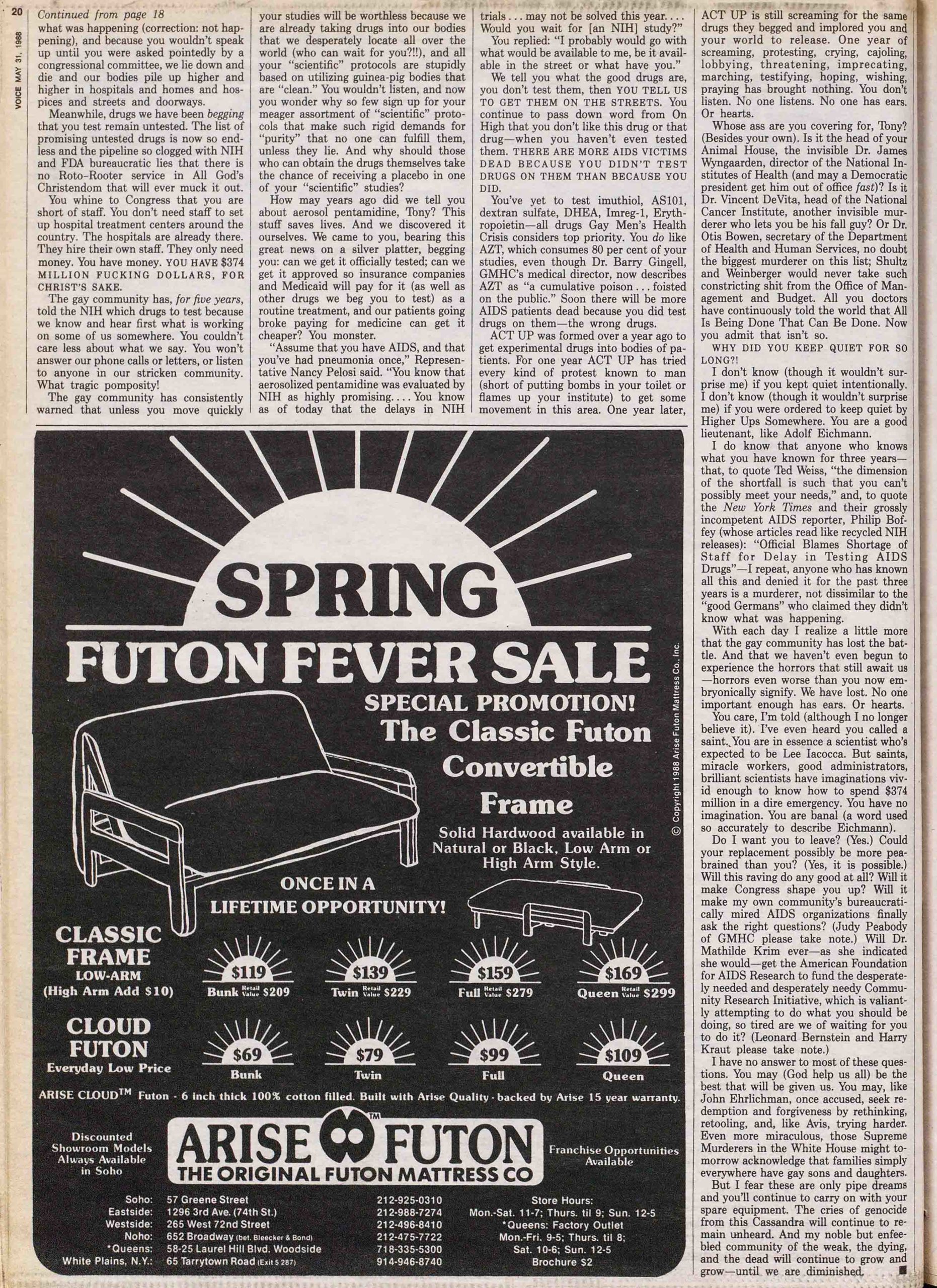