However supercool and desperate and retroactively magnificent it is, American film noir rarely had — film for film — much deliberate philosophical torque. They were mass-made factory product, and came by their collective resonance after the fact, first in the hearts of French cineastes, and then for everyone. It was Jean-Pierre Melville, looking from the outside in, who transformed the noir paradigm into a self-conscious night of modern alienation, and he did it coldly, remorselessly. He never winked. His thieves and crooks and nowhere men are all resigned to their dooms, and never see any reason to get upset about it.

Melville was a one-man filmmaking combine who famously lived in an apartment above his own studio; both Bertrand Tavernier and Volker Schlondorff schooled there, and the Cahiers du cinema crowd loved him. Le Cercle Rouge (1970), his penultimate film, is something of a summation, slicing through its overcast, uncaring, starkly capitalist world by way of Alain Delon’s weary shark-like gaze. He’s a hood released from prison on the condition of a corrupt warden’s idea for a heist. Simultaneously, Gian Maria Volonte (looking every bit of Joaquim Phoenix a few years from now) is an escaped crook chased by a massive manhunt led by grimly toast-dry detective Andre Bourvil (ending a long career as a comic playing against type).

Diners, rainy street corners, winter fields — the fraught paths meander and cross, but neither the film nor the characters are in a hurry; fatalism is, after all, the long story. Eventually, Yves Montand, as an alkie sharpshooter (suffering the DTs in a cheap, oddly Lynch-like room), is recruited, and the silent jewel thievery begins, but the spirit of the film hardly gives us hope that they will succeed — even when they do — because the trouble comes around again, as it must. In Melville’s trenchcoated nexus (a suite of eight films, over 17 years) the social crisis of noir becomes a steely fable of Godlessness.    ❖ 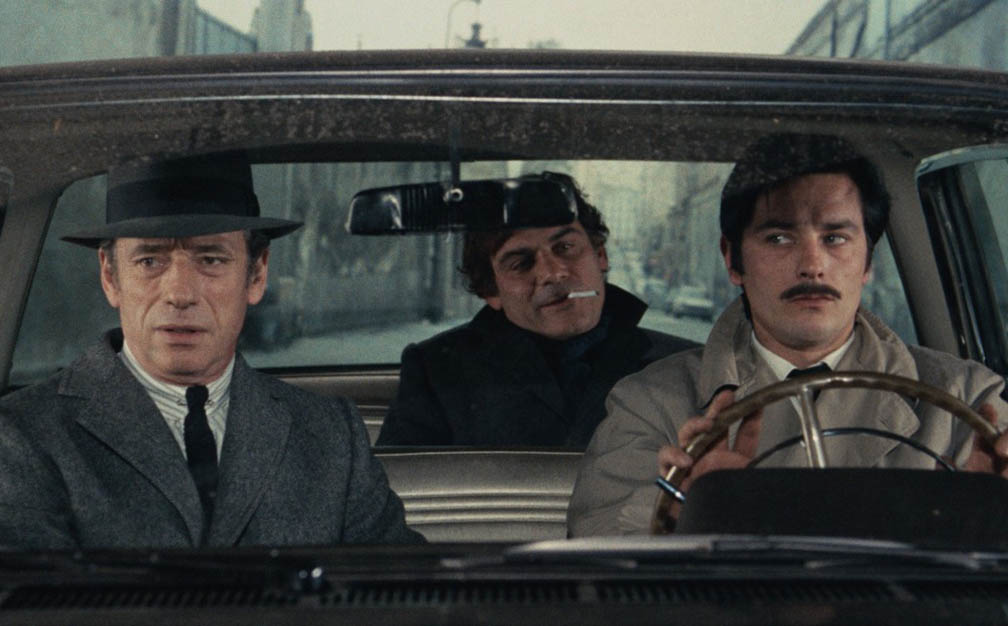