The New York Jets are just weeks away from an April 29th NFL draft that will surely alter the course of the franchise’s history for years to come. They’re going to get it wrong.

Trust me, I’ve already seen the draft and the ensuing season. But I came back to 2021 in order to drop some wisdom on eager Jets fans who just can’t wait to see who Gang Green selects. The same fans who are mired in a decade in which their team has finished with a winning record just twice (2010 and 2015; 70–106 overall), who haven’t seen their squad in a Super Bowl since 1968, and who have witnessed drafting ineptitude that transcends regimes since the 1980s.

Misplaced as it is, I’ve got to admire your faith.

Right now you’re probably yelling, “Who’d the Jets take with the second overall pick?!” Oh, and you want to know if he’s the future, right?

Of course, considering my omnipotence, I could answer all of your questions about the upcoming season. But first, I’ll divulge a more vital piece of information: It doesn’t matter who the New York Jets select in the draft. It has rarely ever mattered, in fact.

Simply put, the Jets do not draft well. Their history is plagued with first-round busts and missed opportunities to draft better players. Jets fans know it. Most of them admit it. The rest have no doubt buried the knowledge deep in their subconscious in order to continue their fandom after more than a half-century of misery.

A lot of that heartache can be attributed to New York’s inability to find elite long-term options through the draft, especially at the quarterback position. You have to go back a couple decades to find the last QB who started for the Jets for more than five seasons: Chad Pennington. The 18th overall pick in 2000, Pennington showed flashes of promise as a starter from 2002 to 2007. However, 2008 saw the Jets cut the oft-injured quarterback in favor of veteran Brett Favre. Later that year, a once-hopeful campaign would be stomped out in the final game of the season by the Miami Dolphins. Miami’s quarterback was Chad Pennington.

The next—and last—period of “stability” at the position came in 2009, when the Jets drafted Mark Sanchez fifth overall. Though mostly powered by their defense, New York made it to two straight AFC Championship games (2009 and 2010) with Sanchez under center, losing both. Sanchez spent four seasons with the Jets, throwing more interceptions than touchdowns and becoming best known by NFL fans for his part in the notorious “Butt Fumble,” in 2012.

New York’s inability to find a quarterback through the draft doesn’t begin or end with the 2000s, though. Who could forget the 1983 draft, where college star Dan Marino miraculously fell to the Jets at 24th overall? Well, they opted for quarterback Ken O’Brien instead, who had a few decent seasons with the team during his nine-year run. Marino went to Miami three picks later and is considered one of the greatest quarterbacks ever to grace the sport.

Still excited for the draft? How about their most recent investment? 2018 saw the Jets take Sam Darnold with the third overall pick. Four selections later, the Buffalo Bills pounced on Josh Allen. Allen is now a top-five QB in the NFL. Darnold was just recently traded to the Carolina Panthers as New York is poised to take another swing at drafting a quarterback.

But this time around, it’ll work, right? Don’t bet on it, because the horrors range beyond the QB position. In 1995, New York took tight end Kyle Brady ninth overall despite an apparent lack of need at the position. Three picks later, defensive lineman Warren Sapp went to Tampa Bay. Brady played four uninspiring years for the Jets. Sapp became a Hall of Famer.

Since 2010, the Jets have used first- and second-round selections on the likes of Kyle Wilson, Quinton Coples, Dee Milliner, Calvin Pryor, Stephen Hill, Jace Amaro, Devin Smith, Geno Smith, and Christian Hackenberg. Only one of them spent more than four years with New York. Most were purged from the NFL shortly after leaving the team. The Darnold deal marked something of a milestone for the Jets: of their ten first-round selections from 2010 to 2018, none remain on the roster.

I mean, even in the rare instances where they get it right, they get it wrong! Look at the 1985 draft, for example. The Jets took wide receiver Al Toon. Great player, right? Now he’s in the Jets’ Ring of Honor. Six picks later, the San Francisco 49’ers selected wide receiver Jerry Rice. Rice more than tripled Toon’s career output, got into the real Hall of Fame, and is considered the best player at his position ever.

Other times, New York drafts well but just gets rid of the player. Exceptionally talented picks like safety Jamal Adams and defensive lineman Sheldon Richardson were both traded before their rookie contracts were up. Even sophomore standout Quinnen Williams was mentioned in trade rumors in 2020. It’s a vicious cycle!

I could dig into the 2003 draft, where New York passed on 17 future Pro Bowlers in the first two rounds, or the 2005 draft, when they selected a kicker with their first pick, but I won’t. Most of the picks are terrible. The good ones are either traded or overshadowed by better selections.

But every team makes these kinds of mistakes . . . right? You keep telling yourself that. In 2000 Tom Brady was picked in the sixth round by the Patriots, 199th overall. And yep, that was the year the Jets used their third pick—after they chose defensive ends Shaun Ellis and John Abraham 12th and 13th overall—to scoop up Pennington. They passed a total of seven times on the man who would dominate their division for the next 19 years. Oops.

So, no, I won’t reveal who the Jets take with the second overall pick in 2021, because while the names and positions may change, the results rarely do. It will not work out.

You don’t need to be from the future to know that.  ❖ 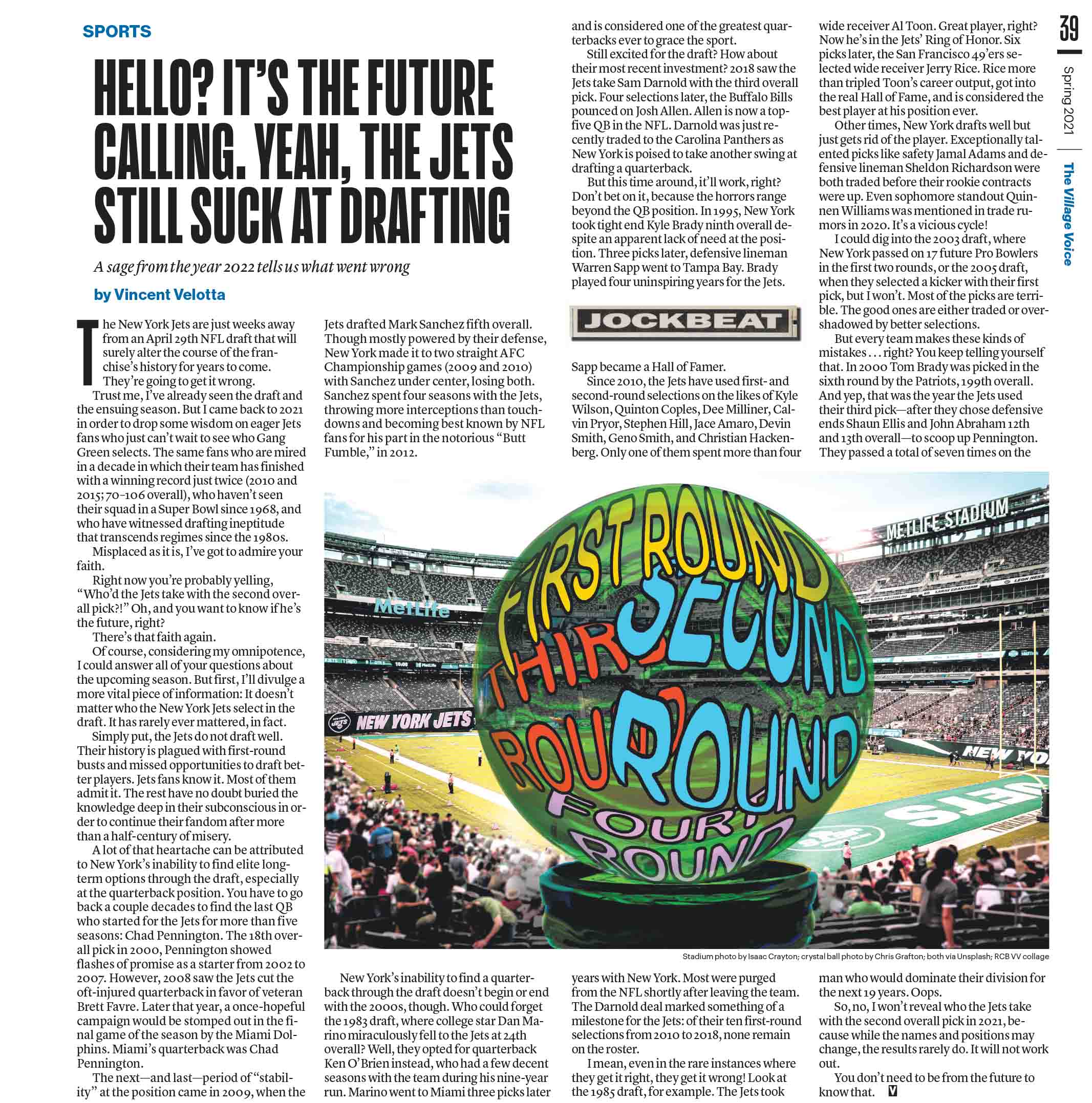