Lawrence Ferlinghetti, who died on February 22, outlived the century he helped define. In 1955, he began publishing the Pocket Poets Series of books, out of the City Lights bookstore, in San Francisco. His own verse appeared in Number One, titled Pictures of the Gone World, but it was Beat poet Allen Ginsberg’s Howl and Other Poems (1956), which was fourth in the series, that landed Ferlinghetti, wearing his publisher’s hat, in court. The American Civil Liberties Union had assured Ferlinghetti that they would defend him should any objections to the drug use and sexual acts depicted in Howl arise. Ferlinghetti, who once described himself as “the last of the bohemians rather than the first of the Beats,” had been prescient that Ginsberg’s trip through the demimonde would rile Eisenhower-era mores. With the ACLU’s help, he won the case, and, according to a Village Voice review of a reading he gave a few years later, it didn’t affect his sense of humor: “The audience really laughed at his witticisms, which are admirably woven into the fabric.”

That complete 1959 review of Ferlinghetti reading to a full house at the Living Theater — a classic example of newspapers being the first draft of history — is below, followed by the full text of his poem “After the Cries of the Birds,” which appeared in the December 22, 1966, issue of the Voice.  —R.C. Baker

Love and Death and Ferlinghetti
By Howard Hart
October 14, 1959

He came energetically onstage in a lumber-jack shirt and corduroys, sat gingerly on a stool, and informally announced that he wanted to read new and unpublished work, but would begin with some things from “A Coney Island of the Mind.”

The world of painting serves as a backdrop for many of Ferlinghetti’s pieces, but his themes seem to be sex and death. It would be wrong to say that he confuses sex and love, for there was very little of love in anything he read. I can’t recall one instance.

He is able to beat home his beauties of sexual orgasm with an ominous (but actual) rhythmic splaying of words. That is to say, the words leave their place, from a language point of view, and are individually enunciated in what seems horribly like baby talk. (When you first catch this baby-talk thing you can hardly believe your ears. As a technique of verse reading it is, of course, an appropriation from Klee in the world of painting. Ferlinghetti is very imbued with painting, and he had more pieces about painters to read the other night than about anything else. I liked the recently written one on Morris Graves best.)

Behind sex there comes the theme of death clanking along like a can tied to a dog’s tail. The writer’s voice itself is somewhat deathlike, and for me there was a second of terror the first time he said “death” because he seemed to croak it from a place underground.

Terror and pity: Ferlinghetti stirs up a pity for his sincere nervousness, or nervous sincerity, in quite confessional work.

And humor: the audience really laughed at his witticisms, which are admirably woven into the fabric. Maybe they seem more admirable to me than they would to someone else, since I didn’t respond to them — and I am not trying to be funny in saying this.   ❖ 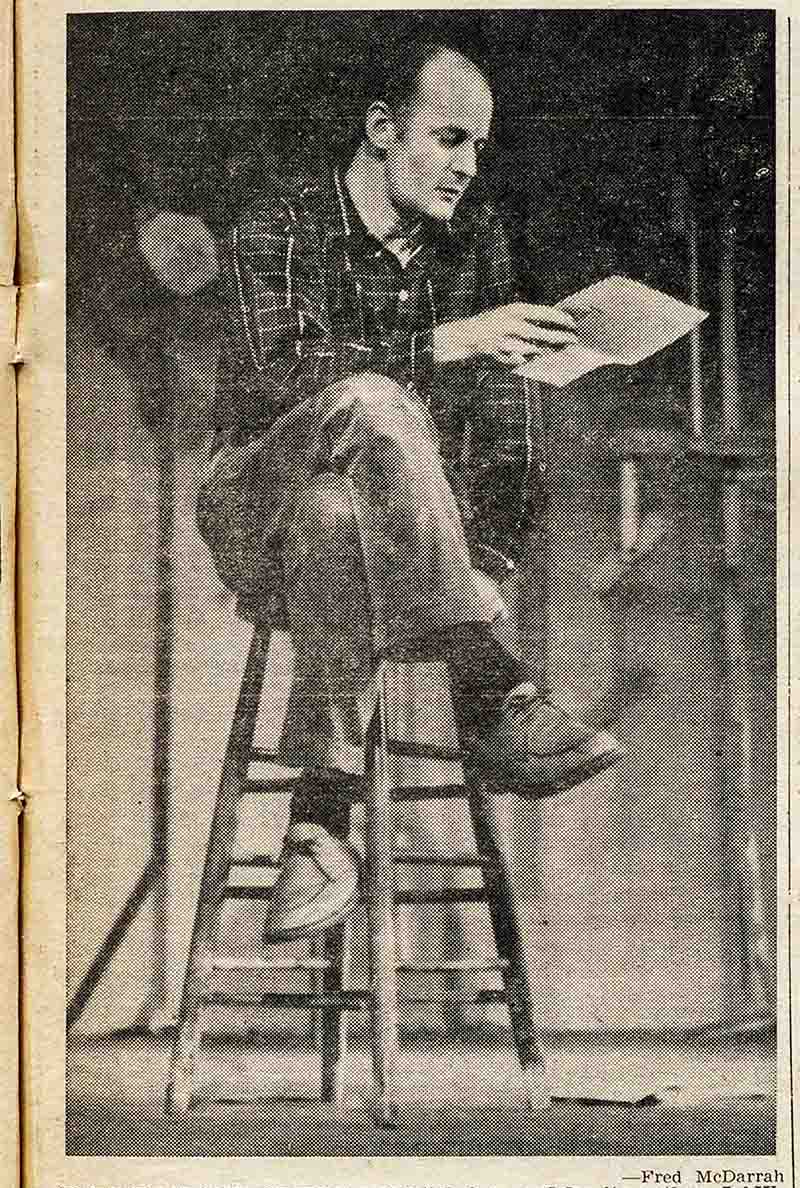 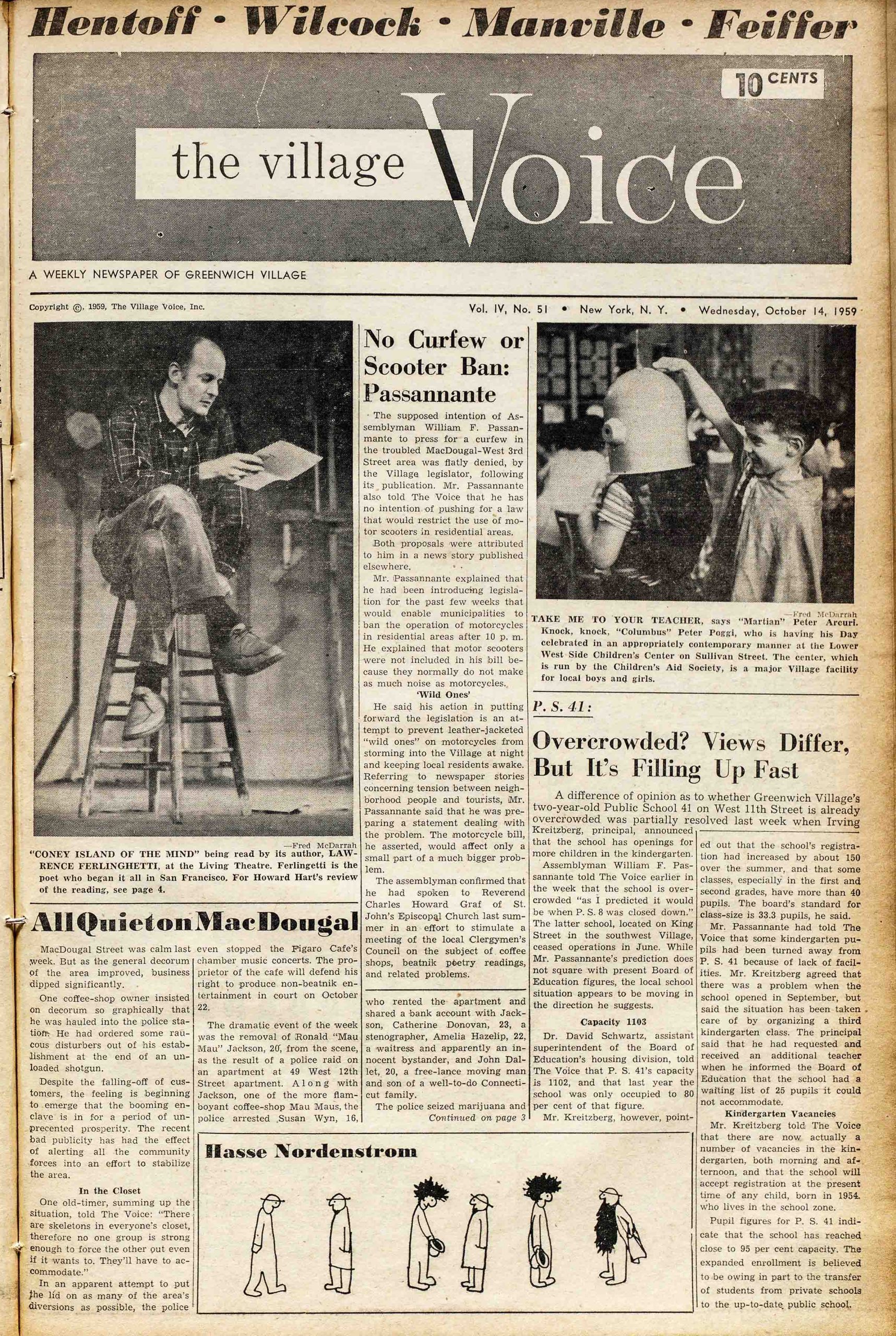 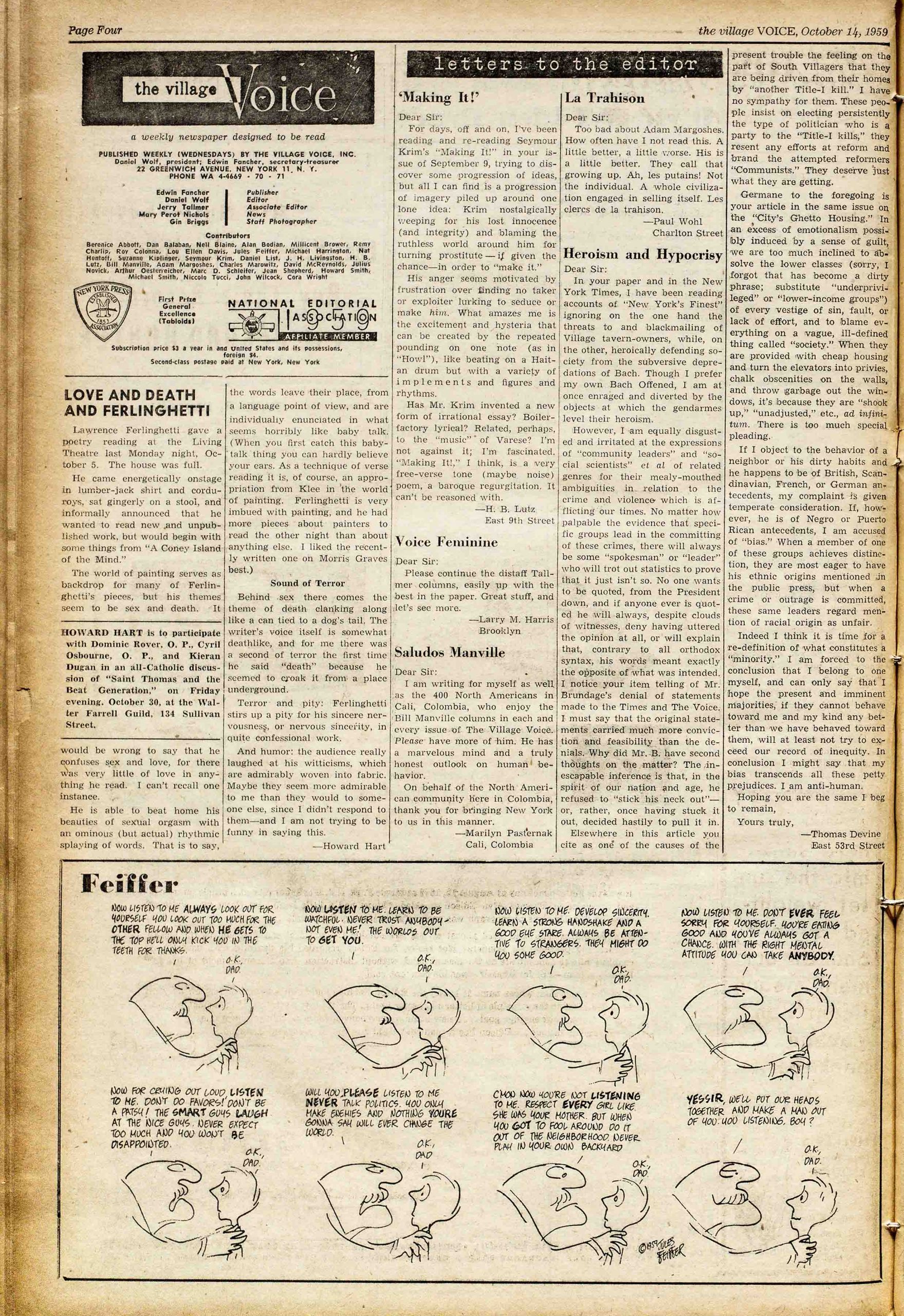 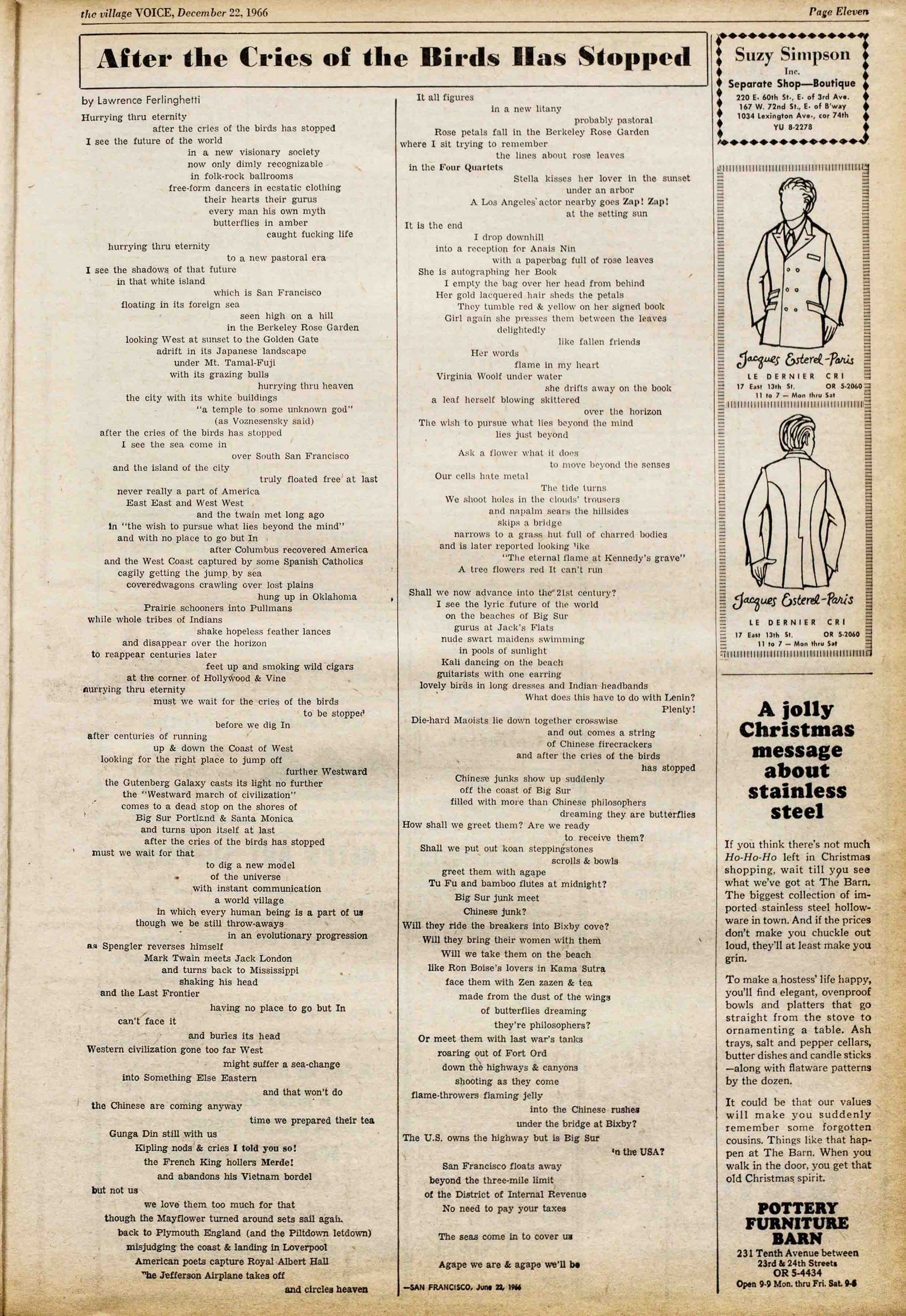