Christmas music is the only pop genre that finds Renata Scotto, the Carpenters, the Gospel Keynotes, John Denver, Joan Baez, and the Drifters recording the same material. It’s the only genre that allows the ghosts of pop music past to resurface once a year and sit side-by-side with today’s new Christmas product as tacky reminders of the eternal. But as the music of the only national holiday with any meaning, the tensions it must contain have been heightened by Reagan’s advent. The family and is idealized as it collapses; both charity and greed coexist with interest rates that make either impossible; material abun­dance in a sputtering economy mixes with the subversive poverty of the nativity. Middle America yearns for a traditional national patriotic Christian culture that never existed. The best gifts come from Japan.

But I like Christmas music. I like the schlock and I like the religion. I like sen­timental innocence and I like trancing out on the same standards sung and resung. I’m charmed by pop music when it’s “try­ing to say more,” and I’m moved by the spirit.

The Beach Boys are my favorite group and so their old Christmas album is my favorite. It’s really pretty good — one side of reverential high-pop five-part harmony and one side of effortless low-pop early­-Brian-Wilson goofs. But you might have someone you like better whose version of “White Christmas” you prefer. Who’s to say? It’s hard to make a bad album when you’ve got such great material.

But not impossible. Although there’s no definitive version of “Silent Night,” that doesn’t mean all versions of “Silent Night” are equally good. Some Christmas music has all the durability of last year’s elec­tronic game or kitchen appliance and all the emotional depth of Christmas at the First Presbyterian Church of Lake Forest, Illinois, with the Ordinary People. It’s a time for celebration, but also for fly-by-­night rip-off quickies. So here, with what I sincerely hope is the right mix of Christian charity and obsessed consumerism, is a guide to some of the season’s better music:

Merle Haggard’s Christmas Present (Capitol). This was the record Willie Nelson was supposed to make and didn’t. While Nelson was breathing life and mean­ing back into pop oldies on Stardust and Over the Rainbow and doing likewise to old white gospel on Family Bible, he re­corded Pretty Paper, an unadorned and largely lackluster collection of chestnuts and carols. I guess it didn’t remind him of any roots. So who would have thought Haggard could be so moving singing “Sil­ver Bells”? But Merle sings the non-coun­try standards with the same cool convic­tion and authority he projects whenever he cares about the material. And reads the lyrics as if they have content, rather than with the middle-of-the-road reverence that defeats Christmas albums by Anne Murray, Emmylou Harris (excepting the bluegrass), the Carpenters, and (almost) Kenny Rogers (who gets high marks for letting his schlocky reach exceed his crossover grasp). Haggard’s other trick is the dispassionate down-but-not-out re­alism of his Christmas hit, “If We Make It Through December.” Christmas music often sentimentalizes poverty (cf. Rogers), but Haggard doesn’t So he earns the right to the sticky sentiments on his other com­positions, and so do we. Lefty Frizzell meets Bing Crosby. Better than both.

Merry Christmas-Feliz Navidad from Freddy Fender (ABC/Dot). One would think that country music, with its fearless corniness and good-hearted pathos, could easily penetrate to the heart of the season the way this album does. But I don’t know another country album as good as this one. One problem is that the season’s pop stan­dards are about cities in the 1940s up north — all that snow, all those violins. An­other is that the religious standards are largely northern mainstream Protestant rather-than Southern gospel. And upscale schlocky reverence is boring, not to men­tion contradictory — Charley Pride’s problem, and Slim Whitman’s too (although Slim gets the so-bad-it’s-good award.) Mickey Gilley comes closest to Freddy at reworking Christmas in a Texas context. But he’s not as crazy as cousin Jerry Lee (or Jimmy Swaggart), and so doesn’t really break through to the cosmic shallowness implied by Christmas at Gilley’s (his up­scale redneck Houston singles bar, site of Urban Cowboy), although it’s a concept worth contemplating.

Maybe it’s Freddy’s bilingual Tex-Mex distance which gives him the edge — a touch of folky authenticity. While we’re at it, let’s pause in the middle of this Anglo-­orgy to mention the large part of NYC celebrating Christmas en Espanol. Two re­cords worth checking out are Willie Colon, Asalto Navideno (salsa) and Felicidades en Navidad y Ana Nuevo con German Rosario (Puerto Rican country music, so to speak). At better record stores everywhere and thanks to Ramon Gonzalez-Sanchez for pointing them out.

Traditional Christmas Carols, Pete Seeger (Folkways FAS 32311). It takes a Marxist New England WASP to remind us that carols are part of a folk tradition. That they rework Christian and pre-Chris­tian folk imagery about the meaning of life, not the meaning of respectability. The singing and banjo accompaniment here are as offhand as on something like Gazette, Vol II. That is, perfect. Simplicity, tradi­tion, intelligence, a little piety maybe, but no straight laces. These are ideas John Den­ver almost grasps on his two (!) Christmas Albums, but loses when he tries to sing those carols as if he can really hit all the notes on pitch. Sorry John, a little too much virtue, or is it inhibition? (Go out of your way to skip the one with the Muppets, unless someone five years old insists.) Joan Baez veers off for a wild ride with respect­ability on her by now oldie Christmas package. For true believers and sentimen­tal fools only. But Uncle Pete, on this hard-to-find, but in print LP, once again shows them what it’s all about.

Rhythm and Blues Christmas and The Twelve Hits of Christmas (United Artists). Anthologies, anthologies, anthologies. Christmas music has plenty of them, and most are pretty bad. Watch out for the country, soul, and gospels ones in particular. These two are done with care, sometimes hard to find, not discounted much, and really worth buying. After all, isn’t a record that follows Eartha Kitt with Gene Autry what Christmas is all about? The old Motown anthology floating around under various titles is worth a lis­ten, but it’s no way close to these. Ditto recent releases by the Whispers and the Tempts, and older ones from the Su­premes and Stevie Wonder.

The Sinatra Christmas Album (Capitol). Need a last-minute present for Dad? Go ahead, this one’s safe. After all, “Have Yourself a Merry Little Christmas” is Sinatra’s song and the album is all of a piece. Nat King Cole’s is okay too, but this one has the same appeal as Merle Hag­gard’s — a realistic feel anchoring the sentiment. It’s not my music, but I hear regret and World War II here, and that makes the reassurance it projects more believable. It also makes me hope the record stores place this next to the country-crossing-over-to-­pop adult-contemporary middle-of-the­-road easy-listening Christmas albums, so those unsure middle-aged suburbanites can just reach for the real thing. Which ia not, by the way, any Christmas album with Frank’s face on it. Look for Capitol and “chorus and orchestra conducted by Gordon Jenkins.”

Phil Spector’s Christmas Album a/k/a A Christmas Gift for You from Philles Records. Christmas is schlocky and vulgar. Christmas is American. And Christmas was pre-rock pop until this album made Christmas rock and roll. I hate to admit it, but this does deserve its reputation. It’s exuberant and it holds together. Spector went after the schlock and the corniness and Spector won. And Christmas schlock is heavy. Christmas schlock is big. You can hear Elvis tangle with it, go 12 cuts, and get TKO’d on his Wonderful World of Christ­mas, perhaps the ultimate bad Elvis album. But one cavil amid the auteur ac­colades. The current reissue features Phil or a Phil lookalike in a Santa suit. The original pictured Darlene Love, the Crystals, the Ronettes, and Bob B. Soxx and the Blue Jeans. Phil’s productions goes after and gets the drama of the schlock but it’s the sincere innocence of the singing that captures and holds the emotion as its core. Leon Russell and Sonny Bono were musicians on these sessions. Can you imagine it with them singing?

The Ventures Christmas Album (Liberty). The endless repetition of the music lends itself both to attempts at recapturing the feeling and to giving up altogether, to just enjoying the surfaces. My favorite in this vein plays a game of starting with a familiar intro riff, like the one from “Memphis” or “Tequila,” and then laying a Christmas classic over that. The poet’s job is to make it new, right? Also noteworthy are the Muzaky wit on Herb Alpert’s Christmas album (A&MJ and the easygoing disco reggae of Joe Gibbs Family Wish You a Merry Rockers Christmas (Joe Gibbs). Also John Fahey’s guitar noodling (Takoma). Notably failures — the Boston Pops, too dramatic this time around, sorry, and Both the Salsoul you-call-this-disco? washed out Christmas Jollies albums (and the 12-inch single). Grace Jones, where are you now that we need you? Or better yet, how about Xmas Bits and Pieces? And nice try but n.g., Kurtis Blow.

Sweet Little Jesus Boy, Mahalia Jack­son (Columbia). All Mahalia Jackson Christmas gospel albums are not this Mahalia Jackson Christmas gospel album. Which, like most of her recorded work, is inexcusably sweetened with strings and pitched toward a taste white folks don’t even have anymore. But it’s a real album, not a spliced-together rip off of gospel out­takes — the singing is great and the message redeemed. Also worth checking out, if not as consistent, are Christmas with the Keynotes (Nashboro), cut when Paul Beasley was still their falsetto, and The Gospel Soul of Christmas (Mistletoe), if just for the Swan Silvertones’ “Go Tell It on the Mountain.”

A Christmas Record (ZE). The cheap shot for a punk/new-waver would be to mock the emptiness of most Christmas sentiment. The real trick is to reinvent the innocence, which this hard-to-believe col­lection of all-new songs does. I like every track, from August Darnell’s somewhat predictable urban-sophisticate “Christ­mas on Riverside Drive” to Was (Not Was)’s unemployed “Christmas Time in the Motor City.” I was charmed by Chris­tina’s we’re-so-jaded “Things Fall Apart” and the Waitresses’ alone-in-the-big-city “Christmas Wrapping.” And (honest, I don’t know him) Davitt Sigerson’s “It’s a Big Country” should be covered by Arlo Guthrie and become a big hit. This record isn’t just interesting — it’s tuneful, it’s America, Christmas, 1981, fantasy and reality, and it’s the perfect gift for anyone from 15 to 40. It’s also only available as an English import, so if you do manage to find it, you’ll have to pay too much. Merry Christmas.

Singles. The only good ones that aren’t on the UA anthologies are the Kinks’ tough ”Father Christmas,” the Eagles’ “Please Come Home for Christmas” (for the cover photo), and “Don Charles Presents the Singing Dogs, directed by Carl Weismann with Instrumental Accomp. Jingle Bells” (RCA), which is a must. Hon-est.

And one last word. Somewhere out there must be a great Jewish record for the season. It is not, however, Barbra Streisand/A Christmas Album, which should be called Barbra Streisand/A Christian Album. “O Little Town of Bethlehem,” okay. But “Ave Maria” and “The Lord’s Prayer”? I don’t get it. Once there was something like Steve and Eydie Wish You Happy Holidays, but evidently no more. I couldn’t find it anywhere. Are you listening, Kinky Friedman? Dave Tarras? Neil Diamond?

Not to worry. The only born-again album to pass my way, On This Christmas Night, exhibited neither the vigor of intolerance nor the power of cultural ascen­dancy just slavish early-’70s soft-rock, a style I’m ordinarily not unsympathetic to. But so far, it seems the tensions that the Reagan worldview laid on Christmas music have invigorated ZE Records and made the born-agains go limp. ❅ 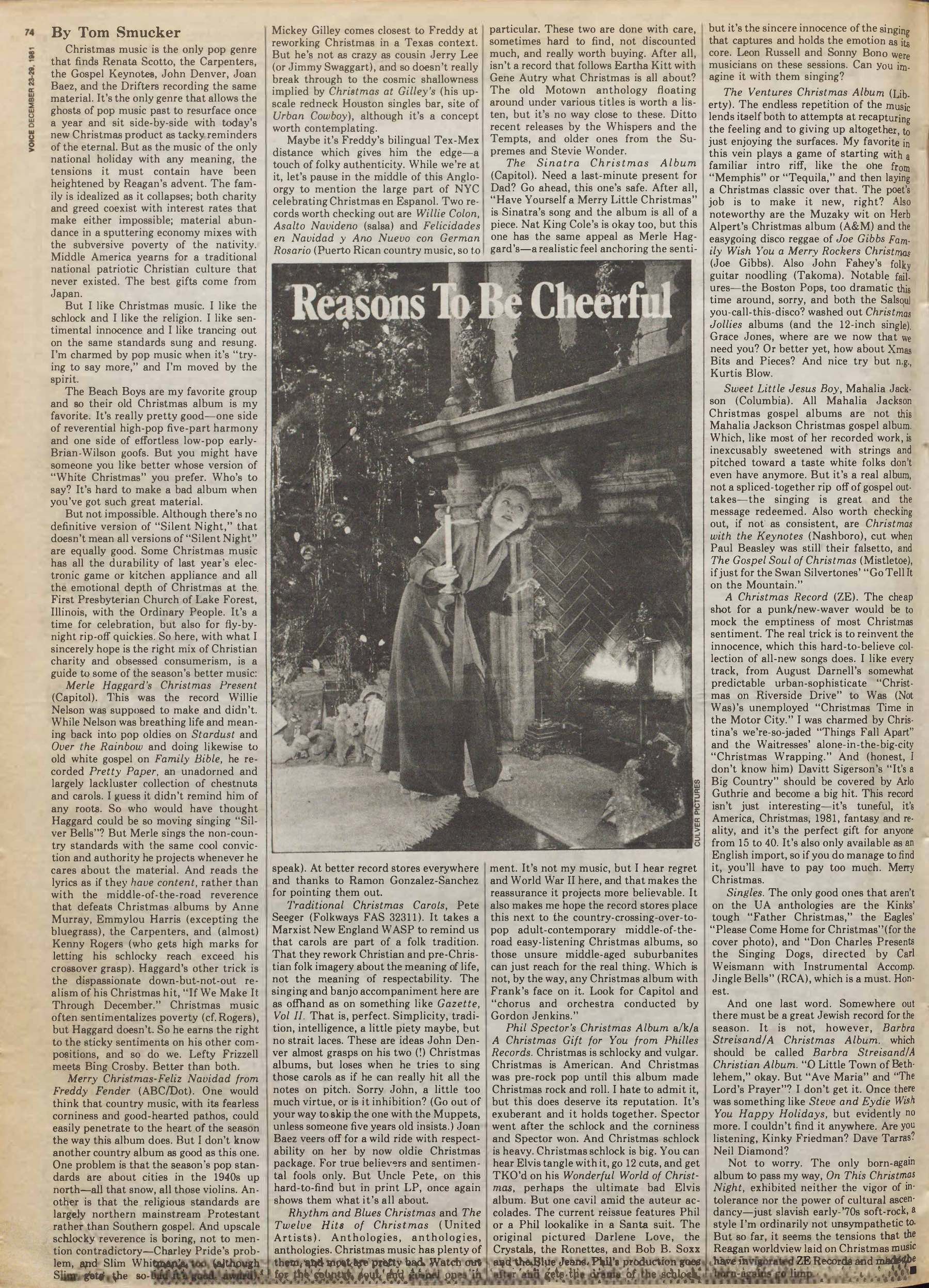