In Michael Mann’s wide-screen, West Coast gloss on his own Miami Vice, the locations almost upstage the stars, Al Pacino and Robert De Niro. Mann is a locations visionary. He sees a city not so much for what it is as for what it might become. Just as Miami remade itself to better resemble its image in Miami Vice, L.A. may rise eventually to Heat‘s desolate, sand­blasted impersonality.

Mann’s City of Lights, where Vin­cent Hanna (Pacino) and Neil McCauley (De Niro) go through their paces as the last of the existential cops and criminals, couldn’t be more re­moved from the gothic, phosphores­cent L.A. of David Fincher’s Seven. Heat’s color scheme is ultracool. In one inconsequential scene set at a con­struction site, Mann finds a 20-foot­-high pile of baby-bunting yellow sand that perfectly balances the film’s basic bleached blues and grays. The image stays in the mind’s eye long after the formulaic plot has faded. So does the ultimate showdown between Vincent and Neil on the far reaches of an air­port runway, where the immediate question of who lives and who dies is dwarfed by the planes roaring over­head. Mann’s use of scale is as mean­ingful as any great modernist painter’s.

The splendid visuals aside, Heat is a cosmically silly movie — which does­n’t make it any less entertaining. Mann manages to have his romance of ob­sessed masculinity and send it up too. The joke is in the casting. Pacino and De Niro are as much dinosaurs as the parts they play; Mann doesn’t demand a suspension of disbelief. If anything, thee competition for acting honors be­tween these two ethnic superstars (relics of the wilder side of ’70s cine­ma) eclipses the fictional face-off of cop and criminal.

Though there are no big surprises in either performance, my preference is for Pacino, whose head-fakes and er­ratic speech rhythms have the improvisatory flair of the new Knicks. Pacino manages to be playful even when he’s excessive and never less than true even when he’s over the top. Moment to moment, he’s a pleasure to watch.

Pleasure has never been part of De Niro’s game. He’s a lot better here than in Casino (which isn’t saying much), and just about as proficient as he was in GoodFellas. At his best, these days, De Niro seems admirable rather than awesome. Once upon a time, his rigid­ity was a desperate defense against a rage that might erupt at any moment. He could make one both fear and long for the return of the repressed. But over time, the rage imploded into a black hole, sucking the life from him­ — and from anyone who watches. Here, that inner heaviness, though it doesn’t make for a thrilling performance, is right for the character — a career crimi­nal who’s ultimately undone nor by the desire for love he so carefully guards against as by a need for revenge that is the one thing he can’t control.

Mann has never gotten the credit he deserves as an actor’s director. In Heat, he does well not only by his two stars but also his supporting cast, par­ticularly Val Kilmer as the most volatile of the partners in crime, Ashley Judd as his intermittently loyal wife, and Diana Venora as a woman who knows she’s too smart to stay married to a cop. She’s so smart, in fact, she almost gets away with using the word “detritus” in the middle of a love scene. ❖ 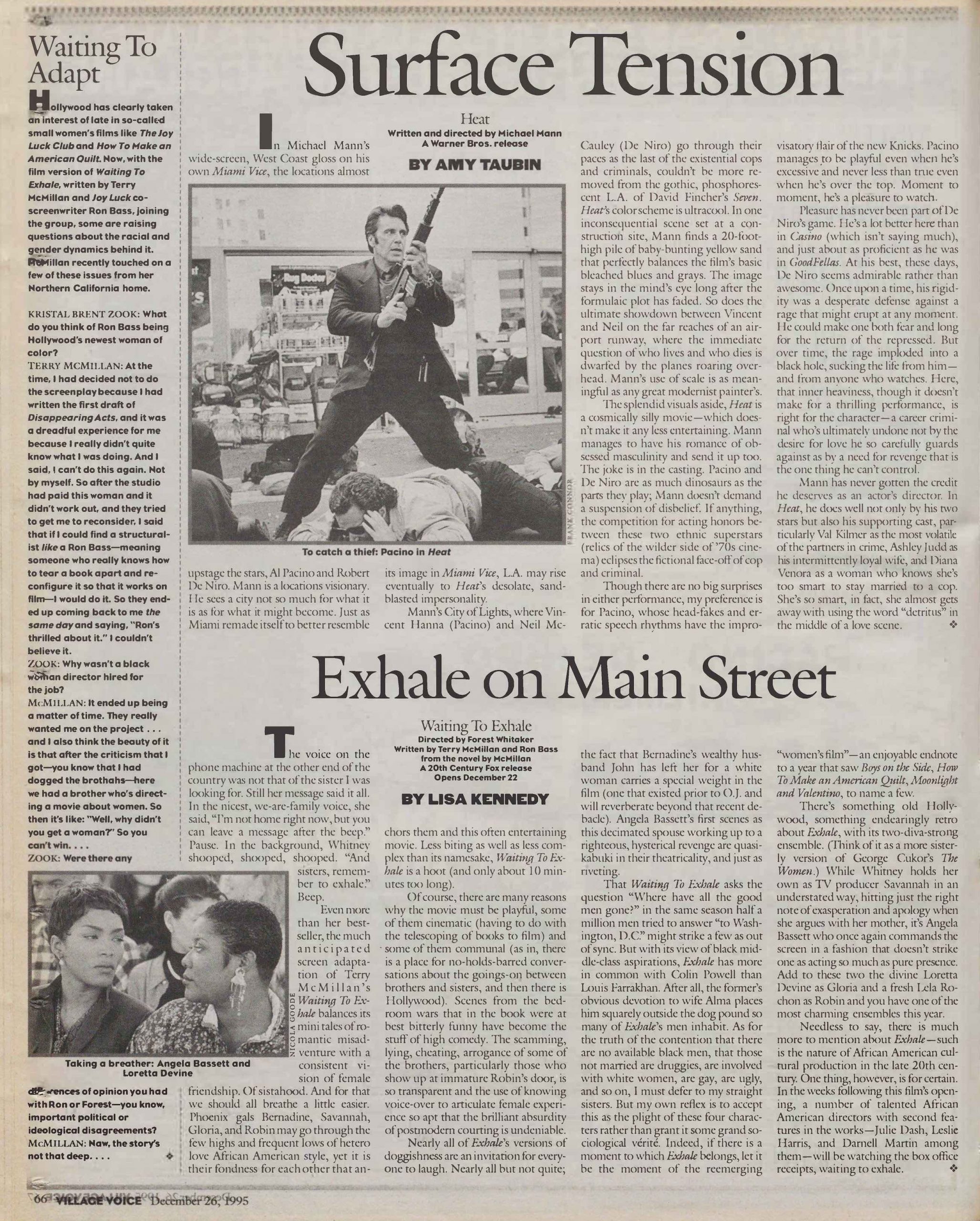