Are you “ready for this?” inquire the Funky Four Plus One in “That’s the Joint:” Are you ready for rapping? Many people are, heralding this counter­-polyrhythmic poetic litany as an art form, the “new wave” in black music. Others see it as an ugly fad, disgusting nigger music coming from those wretched “boxes,” aggravated aural assault/vandalism. It’s like the graffiti dilemma — is it art, or is it a nuisance? I think it’s an art form, but maybe I’m biased, because I come from the land of DJ Hollywood (the undisputed champeen of all rappers), Eddie Cheeba (“The Peoples Choice / the award winning voice / Eddie / Cheeba / Cheeba / Chee­-Chee-Chee-Cheeba”), and of course, Kurtis Blow (he’s on the go), to name a few. To paraphrase Kurtis Blowski, “A place called Harlem is my home.”

Are you ready for this? Well I just can’t miss, a with a beat like this. The beat­ — the beatbeat — the fonky beat is the key to rapping. And that’s what turns a lot of white and black listeners off. The beat is a product of the street and all of its raw, primal, and instinctive energy. These transcontinental urban griots echo the de­spair, pain, and anger of the South Bronx and Harlem (the world’s two major rap centers), which a lot of the cool-jerk white liberals and b.s. black bourgeoisie don’t want to hear. Rapping reminds them that everything is not cool and correct on the home front, like punk rock in England and reggae in the Caribbean. In fact, the “toasting” records of the West Indies are reminiscent of American rap.

The James Brown D.T.P.R.s (dance/trance psychorhythms) of rapping were a welcome change, a disco deterrent from the psychoid Giorgio Moroder os­cillator/squelch wavelengths and the mechanized hustle, the ’70s version of Or­wellian Dancestand. This musical re­vitalization grew from the basements and parks and spread to rec centers and ballrooms, including the Renaissance at 118th Street and Seventh Avenue, the meeting place of the Harlem Renaissance several decades earlier. At the “Renny” (closed down because of gunpoint rob­beries by gangs known as stick-up kids and rampant angel dust usage), you could hear kids, some as young a 11 and 12, “mixing” (playing two records simultaneously, or in sequence, while miscegenating similar rhythm tracks from each record), or rapping over certain D.T.P.R. sections of “Good Times,” or spinning (a mixing technique of repeating a certain word or phrase on a particular record by retarding the movement of the turntable manually) Captain Sky’s soop-soop “Super Sporm.” Some of those pre-teenage deejays got so innovative on “Sporm” that they would create rhythms out of the scratchy noise of the vinyl near the label of the record. In essence, they made the turntable “talk.”

What a lot of the rap dissidents don’t realize is how difficult it is to rap to the beat. Even though Blondie’s “Rapture” is a hit, Debbie Harry’s execution is awkward: her syncopations off and her cadence out of time. Rapping requires the kind of adroit skill you see when little black girls perform the “Double Dutch” maneuver in jump-rope. The bass, percussion, and drums act as rotating rope rhythms while the rapper waits for the right time to jump, to move in and out of the groove on time and on the measure. If call and response aren’t exact the rap is a failure, so the groove has to be repetitive, precise steady, as on MFSB’s “Love Is the Message”, or the standard, Chic’s “Good Times.” On “Good Times” Bernard’s bass provides an anchor, a rock against which the emcee (who usually takes on the duty or rapping while the deejay “spins” the records, the most noted exception being D.J. Hollywood, the Il Padrone of rappers, who did both, expounded on themes of monetary security (“makin’ cold curren­cy”), sexual endurance (“I’ll lay ya right back on a steady pace”), and egotism (“the best emcee’s at the top of the pile”).

Rap records have flooded the market ever since the Sugarhill Gang’s “Rapper’s Delight.” D.J. Hollywood had “Shock Shock the House” on Epic, but it was a letdown to his thousands of fans, including myself. Hollywood seems to be laying low for the time being, but when and if he does make a comeback, everyone will have to take notice. ”The Breaks” by Kurtis Blow­zoski (a word/name nonsense game up­town), an eloquent, absurdist double-en­tendre rap dealing with bad luck, made him an international star. I didn’t like it when it first came out (preferred “Rappin’ Blow”), but the B. F. Skinner-type oper­ant rotation of the major radio stations had me programmed to intone: “And-­these-are-the-breaks.” The Sugarhill Gang’s latest offering, “8th Wonder” is interesting, with Big Bank Hank (a DJ Hollywood Memorex) and Wonder Mike cooling out in the background to let Mas­ter Gee “go off” with a fast and aggressive rap.

These rappers do the job, but they’re just specks in the powerful cyclone created by the two best crews in the world: the Funky-Four Plus One and Grandmaster Flash and the Furious Five. After debuting with “Rock the House,” on Enjoy, the Funky Four came up with a minor master­piece called “That’s the Joint.” The bassline is heavy, accented from time to time with submachinegun riffs, while the five emcees’ rubbery polyrhythmic tradeoffs at the break help funk up the atmosphere. Sharock, the lone (1) female of the group, phrases with almost clinical authority, especially on “I got money/and-I-can-jerk.” Kevvy Kev is the apex, as he incants a mesmerizing rap about various emcees, basketball-dribbling phonetics and syllable fractions in his easy slur while the other emcees counterpoint against the double-time cadence of “Rock the house/rock rock the house.”

But the most creative crew of all is Flash and the Furious Five, because they rap in unison, flawlessly. “Freedom,” on Sugarhill, is a monster jam highlighted by clockwork call-and-response and Cow­boy’s rap at the finale over finger snaps ­— that’s right, no music, just finger snaps. But their first release, “Superrappin,” also on Enjoy, is the classic rap record. They manipulate space and time to create symmetrical vocal patterns that envelope the groove; at one point they rap so fast that it’s hard to understand what they’re saying. All the emcees — Mr. Ness, Raheem, Kid Creole, Flash (even better­-known as a mixer than a rapper), and Cowboy, who rides the groove like his self­-styled “buckaroo of the bugaloo” — have great moments, but it’s Melly Mel who turns the record inside out. His speedy rap near the climax describes the vicious life cycle of a street hood. The story isn’t just exciting, it’s ingenious; his capsulized account of a brutal fate recalls what Jean Toomer did in Cane, condensing a life into a paragraph. This high-powered literary device is what will make “Superrappin” last. It should also be an example to rap­pers who limit themselves thematically to money, sex, and narcissism, because the audience will tire of the repetition. What rap records need to do if they are to have any longevity is to expand in content end direction. Rapping can be used to entertain and educate — “edu-tainment,” as the late Eddie Jefferson said. It could also be used to Reveal, like this:

The GRANDMASTER
Is cuttin faster
Listen to his spinnin sound
As the circle goes round n round
And His line goes on n on
Leadin to the break a dawn
Two figures that become as one
Known as “The Shape of Things to Come”
And you know that, Right?

(All quotes from “Real Rap,” by Barry B­elski and the Omniscient One) 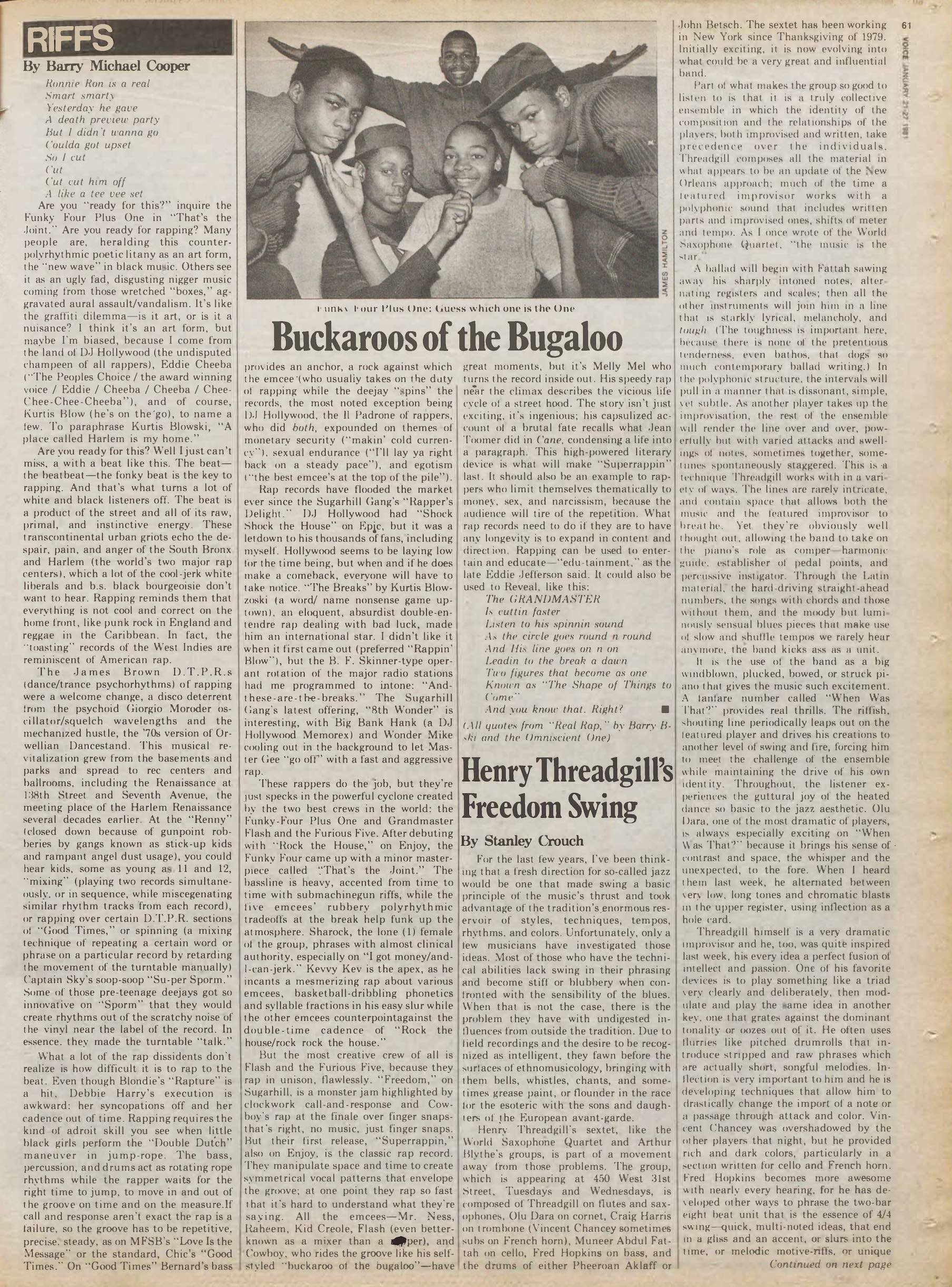