“THE GODFATHER PART II” continues the saga of the Corleone family. Now ensconced on an estate in Lake Tahoe, Nevada, near their gambling holdings. The year is 1958, Al Pacino has succeeded Brando as the Don, and there is rumbling in the ranks. While the sun is shining upon little Anthony Corleone’s confirma­tion celebration, storm signs darken the already dimly lit interior of Michael Corleone’s study. The wayward sister (Talia Shire) de­fects, disobeying her brother to run off with a fortune-hunting wastrel (Troy Donahue); Frankie Pentan­geli (Michael V. Gazzo), an old-time clan member into his cups, argues with Michael over his association with Jewish gangster Hyman Roth (Lee Strasberg); Fredo (John Cazale), the chicken-hearted elder brother, is publicly humiliated by his inability to control his floozy Las Vegas wife; and Diane Keaton, as the first lady, continues to smile bravely and swing her hair, but there will be trouble from her, too.

An attempt on the Don’s life is followed up with an investigation, whose meandering path is intercut with flashbacks to the childhood (in Sicily) and youth (in Little Italy) of the Godfather, played by Robert de Niro. These sections, if all goes according to Paramount’s dreams of lucre, will eventually be joined to the Sicilian sections of the earlier picture to make a complete film — the first part of a trilogy to play, with chronology corrected, as a roadshow package. The Sicilian and Little Italy episodes are filmed in the faded­-browns-and-yellows, Immigrant Portrait style, and in the miniaturized perspective of a spectacle viewed from a great distance.

Brando’s absence hangs over the new picture as his presence — minimal in time but central in effect — hung over the previous one. Ties are disintegrating, the center no longer holds, and the narrative is correspondingly diffuse. In the new script by Coppola and Mario Puzo, the Corleones have brought their way into a respectability hardly more dubious than than of America’s other first families of finance. Gambling is the naughtiest enterprise alluded to, and Michael and brothers are given to quoting the Godfather’s maxims much as the young Kennedys must have treasured patriarch Joe’s pearls or Irish wisdom. The success­ive Corleone patriarchs are odd combinations of Robin Hood and Christ, whose only crimes are, re­spectively, to rid Little Italy of an extortionist bully, and to expunge from the bosom of the family those who would betray its ideals. When these happen to be blood members, well, that’s the way the pignole cru­mbles.

Coppola and Puzo, bowing no doubt to public pressure, have made “The Godfather Part II” consider­ably less violent than its predeces­sor. There are but five or six killings, and the corpses are removed with the efficiency of a Shakespeare his­tory play, as the Corleone saga moves on to another stage of world history: Cuba before, and during, the revolution: the Kefauver crime hearings; an F.B.I. prison; with a swelling Nino Rota score to provide emotional unity.

It is describing physical locations themselves that Coppola’s imagination comes into play, but the human confrontations staged in those dazzling locales never fulfill their promise. As in “The Conversation,” Coppola opens on the world and closes on the tortured individual, in an image of despair a shade too sensitive and heroic for what has preceded it. Watching this largely non-violent sequel, I couldn’t help but be struck by how crucial violence was to the first film. Without it, the characters are not only not mythic­ — they are not even very interesting.

The pale cast of reflection hovers over “Part II” without ever harden­ing into active thought, much less verbiage. (The use of Italian dia­logue, with English subtitles, can’t quite conceal its inanity). Coppola and Puzo haven’t the curiosity of even a Galsworthy (forget Balzac and Tolstoy) that might lead them to investigate the various branches of the family, and discover a sense of the era through the words as well as the “looks” of its individuals. Even among the brothers, there is a lot or emotional display — hugging, kissing, caressing, eyes watering or smol­dering, but the actual dialogue could be contained on the back of a grocery list. It is — how you say — visual.

What about the women? From what we see of them, mostly their backs. Hyman Roth’s wife makes tuna fish sandwiches and the Mammas Corleone make babies. Mamma the Elder (Morgana King), unlike most Italian mothers of my acquaintance, retires gracefully to the the wings. Coppola makes a gesture to the “new consciousness” by im­plying a certain critical perspective on the patriarchy, when Michael asks his pregnant wife “Does it feel like a boy?” But by focusing audience interest so exclusively on Pa­cino, and by making his enemies either invisible or unattractive, he effectively neutralizes their subver­sive potential.

It is difficult to discuss acting with performances that are allowed so little articulation of their own, that are controlled and positioned so carefully within an aesthetic scheme. The artiness of Coppola’s aesthetic ultimately becomes an ethic as Pacino, in somber profile, emerges more victim than villain, more a melancholy Dane than a bloody Macbeth.

“The Godfather Part II” is marked, more clearly than its pre­decessor, by a moral confusion at its core which is in sharp contrast to that sense of moral wholeness of the great storytellers of the past, an equilibrium working behind the affairs of men that gave an importance to their actions, and words, that lyrical long-shots and poignant close-ups alone cannot produce. ❖ 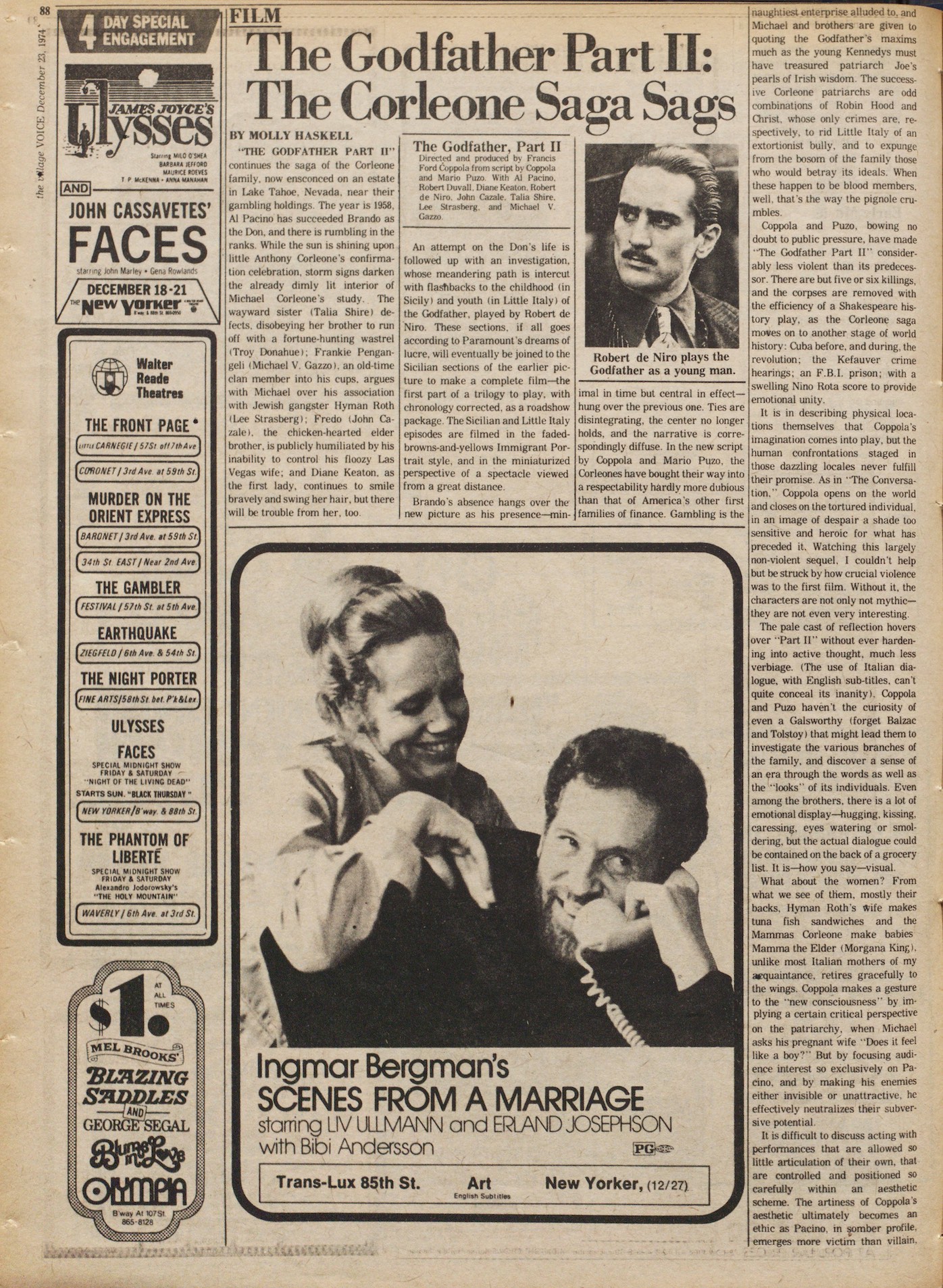 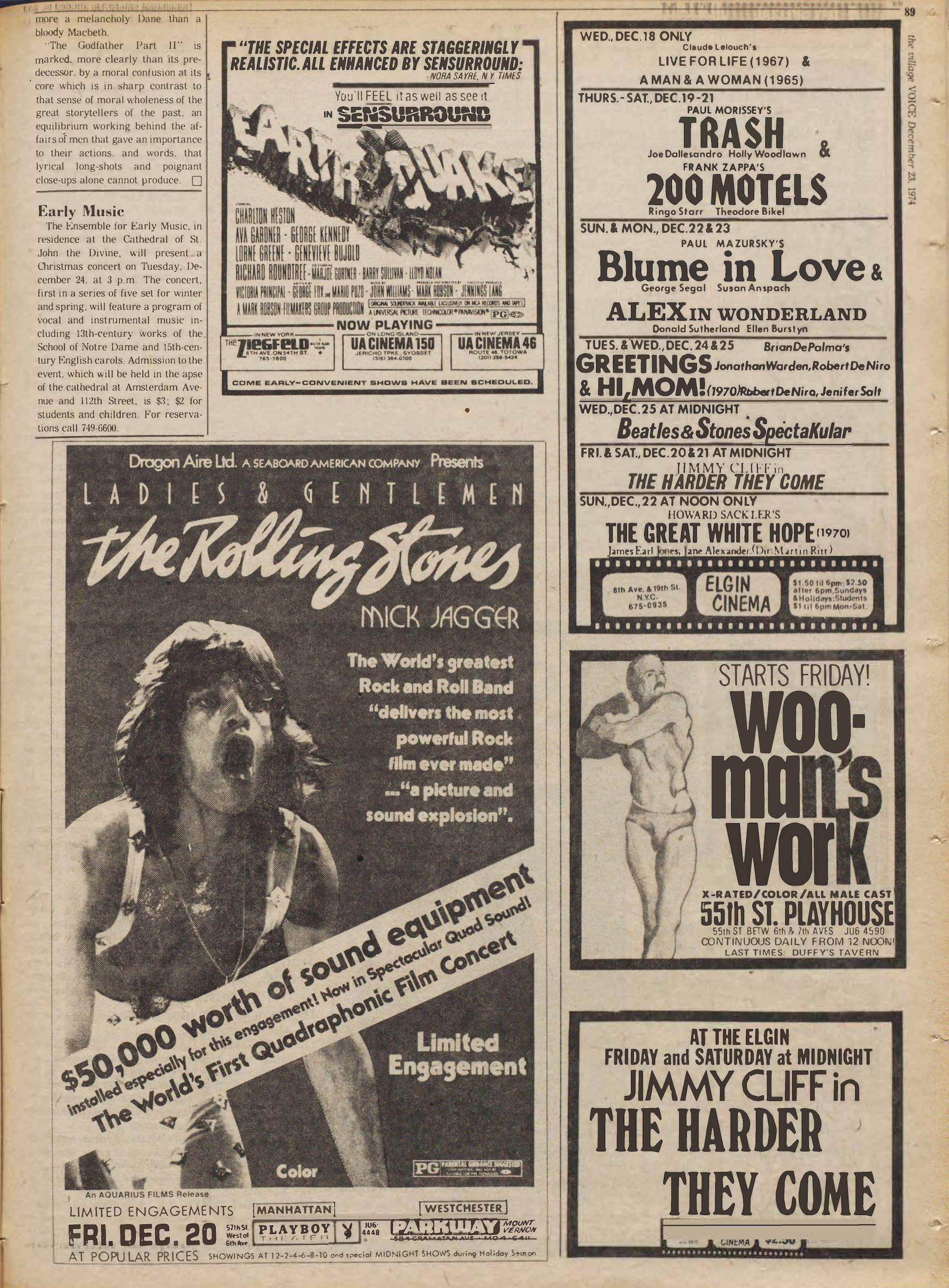