Film being what it is, i. e., canned celluloid, it’s not often that a movie showing becomes an Event — a unique, don’t miss, tonight-only presentation on the order of the one-night stand of a theatrical performer or politician. But due to its prospective problems with Italian censorship, Bernardo Bertolucci’s “THE LAST TANGO IN PARIS,” shown closing night at the New York Film Festival, was just that, and runs the danger of becoming a collector’s item in the audience’s memory. The single just­-completed print was rushed in to the festival, and immediately withdrawn for submission to the Italian censorship board, whose approval it must have to qualify for funds as an Italian production. All very complicated, and whether this affects its release here by its distributor United Ar­tists, remains in some doubt. Even in the relatively lawless and licentious ambience of the New York meat market, where it could certainly open with an X rating, the spectacle of Marlon Brando performing acts that have hith­erto been restricted to the reper­tory of anonymous princes of porno in West Side grind houses, has the power to shock (Alice Tully’s marble pillars are still re­verberating). And the techniques used to lead the young French girl, played by Maria Schneider, from tearful objections to groaning surrender, prove there are still frontiers and inhibitions to conquer, and miles to go before we sleep the dreamless sleep of the totally released!

The combination or Brando, Bertolucci, the Subject and the circumstances of the showing created a natural stir beforehand. Variety reported the scalpers’ price for tickets was $150, but from the looks of the lonely enthu­siasts badgering, pleading for tickets in front of the Hall, I don’t think that kind of money was available on the open market. At any rate, nobody was selling (one-upmanship being priceless in these circles) and if the film had only been half as good, half as sensational or half as erotic, it would have stood the audience on its collective ear. In the lobby afterward there were rumors of walkouts by board members and vomiting by well-dressed wives. Audience reaction varied widely and very much according to gender — in those categories I keep trying to avoid, but which keep forcing themselves on our attention. The gays, as a group, were the most negative; men of heterosexual persuasion (check one to 10) either liked it with “strong reservations” or didn’t like it at all — one notorious ladies’-man-about-town and dabbler in decadence called it “childish” and “rubbish.” Women were either negative, with an undertone of disapproval, or wildly partisan — the group in which I find myself despite previous resistance to both Bertolucci and Brando. Here they conspire magnificently, some­times awkwardly, to create not just a film about an affair, but the affair itself — an affair which we have the option of resisting or ac­cepting on a gut level, and which like most affairs (and unlike most current films) is better experi­enced than written about.

I don’t intend to speculate on the whys and wherefores of reactions other than my own (and my turned-on sisters’), except to say that in this case reactions by sex are probably justified. Because it is a film about sexual attraction, about an affair “for sex only” (which ultimately disproves its very possibility), about de-­repressing a woman, initiating her into all the low-down lusts and body needs in a relationship that, unlike those in Miller and Lawrence and most eroticists, does as much — perhaps more — ­for the woman as for the man.

Brando, a golden, brawny, will­fully seedy American in a camel-­hair coat with camel-hair hair, picks up — in a manner of not­-speaking — a young French girl, a frizzy haired doll-faced hippie, in an apartment for rent in Passy. They screw standing up as the sun streams onto the dirty rug of the empty apartment, to which they return in the following hours and days for more and different and better and worse of the same. Bertolucci manages the extraordinary feat of making Brando 20 years and many miles from the caricature stud of “A Streetcar Named Desire” seem strange to us. Although the vitality and humor of the Williams-Kazan cre­ation are still there, he seems to be working out his own destiny (and perhaps script) with, ironi­cally, less method virtuosity and more faith in character, in his own and in others. The veils of celebration are less obtrusive, the humor more mordant and spontaneous, the stillnesses more daring. He works with Schneider even when he is deliberately ig­noring her to bring her through the gutter of sexual loathing to the discovery — fatal to him — that the sex principle is as close to Thanatos as to Eros.

Meanwhile we see them, in their lives away from each other, involved in other forms of love and death and comic horror: he with the suicide of his French wife, proprietess of a fleabag hotel which harbors remnants of the Italian cinema like flies on flypaper; she with her boyfriend (Jean-Pierre Leaud) who is making a film of her, which includes a multitude of “hom­mages” to French and American cinema, and particularly re­sembles the way in “Le Petit Soldat” the hero (Michel Subor alias Jean-Luc Godard) circles his beloved, framing her into art, freezing her into the object of his love-creation.

There is a fine reversal in the contrast between the two men: the paradox that from the country of puritans has come the ultimate lover, while the country of lovers has turned into aesthetes and ob­servers. Leaud idolizes the girl, framing her into an image for posterity; Brando degrades and abuses her, takes her, without a name or identity, in the here and now. Leaud ignores the underside of a woman, the change, and lust and “unspeakable” desires. Brando celebrates these, the en­trails, the viscera, the dark knowledge of human beings turned inside out, like the figures in the Francis Bacon paintings which form (a little too self-cons­ciously) the visual theme of the film. It is only when he has her pinned to the wall, screaming that she will do anything, anything, he asks her, that she realizes —­ perhaps — that he is the one man who hasn’t used her.

If we never quite believe the depth of passion called forth from her, Maria Schneider gives a remarkable performance as she moves from a bright, spoiled doll to a distraught woman.

Is it possible to have an affair “for sex only?” the film asks. I have asked it myself. Bertolucci finds, as I found, that the answer is No. It is necessary. But not pos­sible. The person who asks the question has already ack­nowledged that split between mind and body which aspires to a closing of the gap in the mind’s terms. ❖ 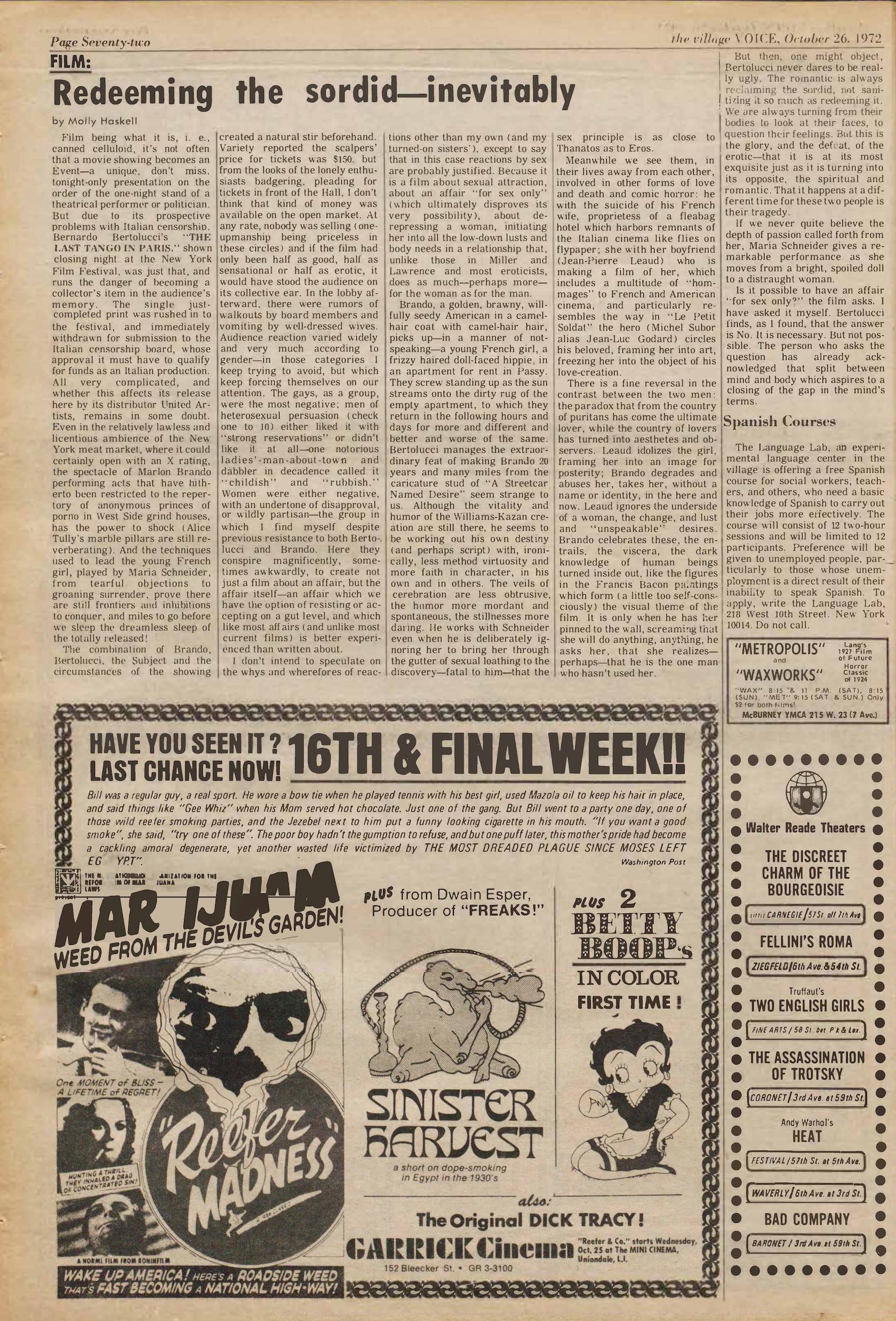