“The most popular explanation hinged on the impatience of one John Gotti, a violent little fat man from Howard Beach”

After all the pictures were taken and Paul Castellano’s cigar butt had been re­trieved by the cops and someone had found a piece of his skull the size of a half dollar lying near the entrance of Sparks Steak House; after the bodies of Castel­lano and Thomas Bilotti had been carted away, and the big black Lincoln had been taken to the East 51st Street station house; after all that, two middle-aged men — one black and one white — stood on East 46th Street, staring at the chalked hieroglyphics of murder on the sidewalk before them, retailing “dearies.”

“My dearie is that the trial took up so much time, dey hadda whack him out,” said the white man, who was in his six­ties. “Nobody was mindin’ the store.”

The black man’s dearie was more up­town. “It had to be the Colombians, man. They tired of these old-time gangsters and they want to take it away from them. So they kill them. It’s simple, man.”

In the days following the murders, such dearies were everywhere. There was, to begin with, the dearie of the Castellano tapes. The government had penetrated Castellano’s home with recording devices, had listened to Big Paul discuss various Mob felonies, and would use the tapes in the prosecution of the five family heads who make up the so-called Commission. So Castellano was knocked off to save the four other bums by making the tapes in­admissible as evidence. Problem: the tapes are still admissible.

But the most popular explanation hinged on the impatience of one John Gotti. This is essentially a generation gap dearie, in which the 45-year-old Gotti, a violent little fat man from Howard Beach, had wearied of the old-world conservatism of the 73-year-old Castellano. What was all this stuff (the young hoods wanted to know), investing in legitimate businesses? Let’s do what we do best: peddle heroin! For several years, Gotti had been restrained by Aniello (Mr. O’Neill) Dellacroce, Castellano’s under­boss, in the Gambino family. But the un­happiness in Mobland was endemic.

The Gambinos had 250 “made” mem­bers and 550 associates. Since most of these imbeciles can barely read a menu (let alone an annual report), investing in legitimate businesses did them little good, particularly if the investments were in Castellano’s name. The more cautious Castellano became, the less his soldiers had to do; it’s demeaning for a 45-year­old man to steal cars for a living. What hoodlums do best is peddle heroin and kill people.

Castellano had let out the word that he wanted Bilotti to succeed him as head of the family. And Dellacroce had gone along. Then, last month, Dellacroce died in bed. And according to the dearie, Gotti immediately went to a pay phone and called Palermo for outside contractors.

That was, in some ways, business as usual. What was extraordinary in the days immediately following the 46th Street killings was the tepid, impotent reaction among our political leaders. Mayor Koch deplored the killings, of course, and vowed that the gunmen would be caught. But his police commis­sioner was talking as if this were a shake­up at Drexel-Burnham. Neither chose all-out action. There should have been police raids all over town that night, with cops smashing into social clubs, chopping the walls to pieces in search of guns hid­den by the assassins. They should have dragged the wise guys by the hair out of their beds, exposing them before their neighbors, jamming them into police sta­tions for interrogation. Koch could have unleashed the full fury of the law. Noth­ing of the sort happened.

Mario Cuomo reacted in an even more appalling way. He chose to mark the oc­casion of a rush-hour double homicide by complaining about the use of the word “Mafia.” Not about the killings, but the way they might be perceived. Yes, there are Cubans, Colombians, Jews, Vietnam­ese, Chinese, Irishmen in organized crime. But this branch of organized crime, in this city and this state, is Mafia. It’s a collection of 1500 to 2000 Italian-­American dope peddlers, killers, thieves, and musclemen whose continued exis­tence smears every hard-working Italian-­American in the country. Wise guys don’t work; they live like parasites off other people’s work. And what does Mario Cuomo, the tribune of the working man, have to say? “You’re telling me that the Mafia is an organization, and I’m telling you that’s a lot of baloney!” Cuomo, who will certainly be Mob-baited if he runs for president, should be leading the fight against these skanks. But he doesn’t even admit the Mafia exists; next week he might tell us there’s no Sicily either.

Denying the existence of the Mob is as bad as accepting it as permanent. The drive should he to eliminate the Mob from American life, and that task is not as impossible as books and movies make it seem. Clearly, the cases against these hoodlums brought by Rudolph Giuliani (no matter how poorly prosecuted) have already had some effect. Prosecution ties these aging bums in legal knots; it con­sumes their energies; it makes them cau­tious, diverts them from felony.

But much more could be done. The media could help by taking the romance out of the Mob; these aren’t “men of honor” out of The Godfather. They’re people who spread misery and degrada­tion through heroin; who use physical force to extort what they can’t get with work, intelligence, or talent. In the press discussion of John Gotti, law enforce­ment officials told the story of what hap­pened to a neighbor who accidentally ran over and killed Gotti’s 12-year-old son Frank. A year later, the man disap­peared, and the cops have information that he was chopped up with a chainsaw. These are not people who sit in the gar­den at twilight, reading Marcus Aurelius.

The cops could also use some muscle in dealing with them, harassing them at ev­ery opportunity, locking them up whenever possible, letting them know that be­ing a hoodlum is a miserable life. The courts should cooperate with warrants, allowing the cops to tear apart their fan­cy homes, their lovely lawns, in search of weapons or drug money. The churches could deny these cretins respectability in the neighborhoods where they live. So­-called “straight” businessmen — particularly bankers — must learn that if they do business with hoodlums, they’re going to do heavy time. None of this can happen if elected leaders treat the Mob as an amus­ing fiction, or an unbreakable component of this society. There must be a recogni­tion that these bums are the enemy, that they’ve made this a more dangerous and degraded city by their operations. Their perceived ability to “get away with it” adds to the city’s generalized cynicism.

On the morning after Castellano and Bilotti were ambushed, I went down to federal court in Foley Square, where doz­ens of these bums — including Castel­lano — have been on trial for weeks. There was a platoon of them in the fifth-floor coffee shop, whispering, smirking, gig­gling. Not one of them had a newspaper, but they’d certainly heard the news. They did not offer any dearies. ■

This article from the Village Voice Archive was posted on November 27, 2020 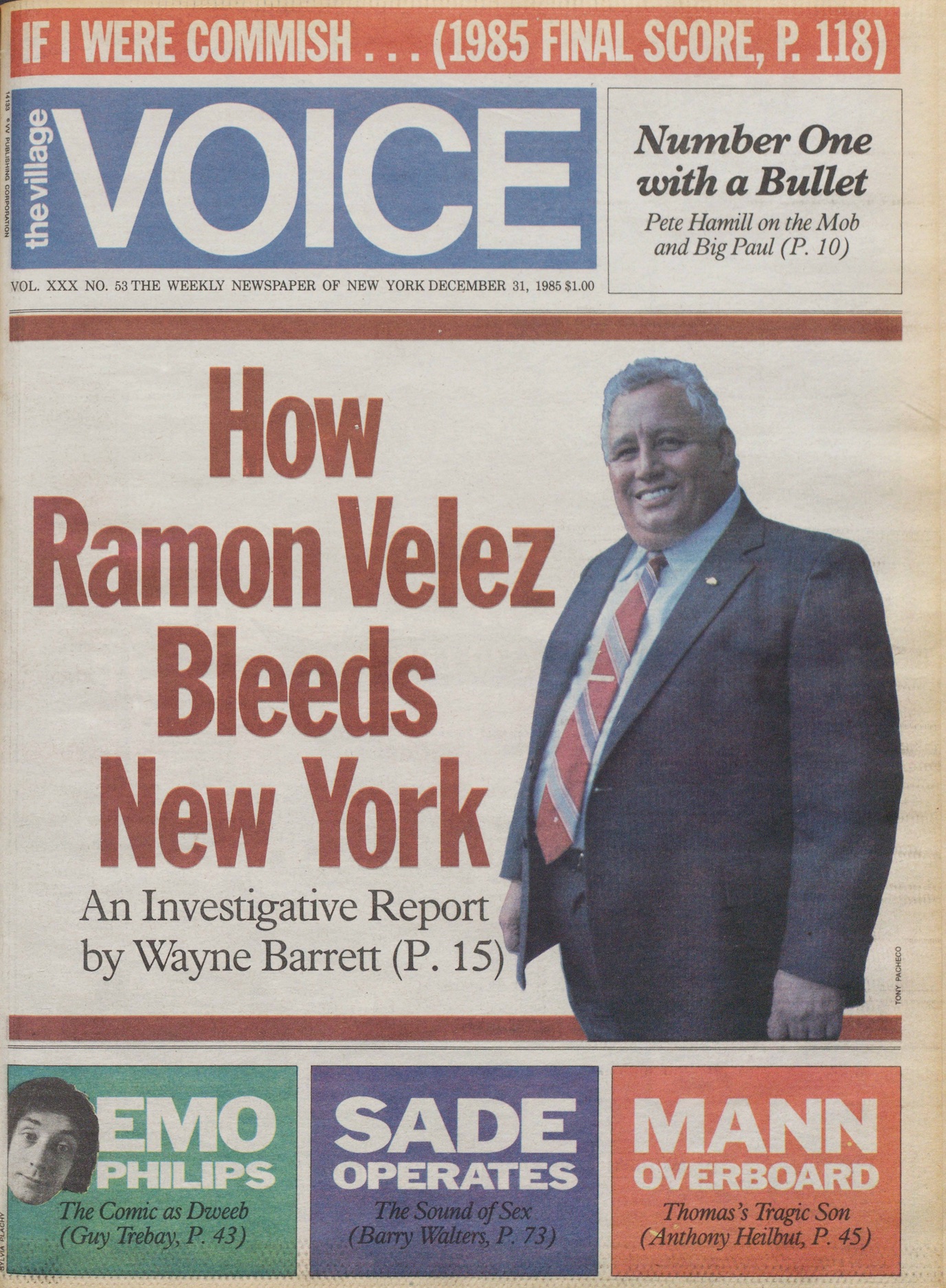