On the last Wednesday of Advent, toward Midnight, I had the urge to and did taxi down to Max’s Kansas ­City for a nightcap with a lady friend who happens to write a column of witticism and miscellany in an underground magazine for the wealthy. Arriving at a portal which one invariably felt had been entered once too often, we were nevertheless ­greatly disappointed, almost heartsick, to find the premises dark, the glass doors latched, and an ignominious “closed” sign scrawled on a torn scrap of cardboard the only explanation.

The next morning readers or the New York Times would learn that the restaurant was closed on account of darkness, foreclosed by Con Edis­on after a series of unpleasant oc­currences: the withdrawal of Max’s creator Mickey Ruskin from man­agement and controlling interest: the accession of one Donald Soviero who changed the policy from Steak and Chickpeas to Steak and Lasag­na; and the very late recoupment or Max’s by Mr, Ruskin due to an escape clause in Mr. Soviero’s Chapter 11 agreement under which the new owner was entitled to pull out if it happened that his Sicilian cuisine did not reverse the restaurant’s fortunes.

But alas, we no longer read the Times since that publication in­creased its cost of home delivery, and so we would have no way of knowing, except by grapevine, that Mr. Ruskin had repossessed a res­taurant which owed some $13,000 for heat and light, that apparently Mr Ruskin was unwilling or unable to submit to the pains in the ass neces­sary to raise that much cash, that he had returned the keys to the rental agent, and that most likely we had seen the last of Max’s Kansas City.

The latter was a person whose acquaintance the lady had made in the back room or the restaurant the previous Saturday evening, an acquaintance which had bloomed into intimacy since. And although I had not expected to revive any particular friendships that evening, I nonetheless experienced quite similar emo­tions.

And as the cold wind blew one wondered where to go. The lady, recovered somewhat from her loss, suggested we give the bar on the next comer a try. “I hear they have a new policy,” she said.

The Barn at 19th and Park had never had a policy as far as I could tell. A big, empty room with vaguely rustic decor, it had been a faint presence for years, principally when the cigarette machine at Max’s was out of order, but it was, invariably deserted except for a few lonely men at the bar.

Although, if the reader must know, the person my companion had hoped to meet at Max’s was in fact the object of an other than natural admiration, nevertheless the Barn did not appear to be the sort of depths which maintain such desirable denizens. Putting it bluntly but aptly my friend said, “I’ll never get laid again.” Hyperbole? To be sure, but grown from a hideous grain of truth, for it seemed that Max’s was the last refuge for a certain type or variety. Bars, like magazines, breakfast cereals, and just about everything else, were becoming frighteningly specialized. Yes, you have your stewardess bars, your blaring homo discotheques, your blaring hetero discotheques, your after hours glitter clubs, your hooker bars, coke bars, leather bars, up the ass to the elbow bars, but where oh where is the melting pot where something unclassified might turn up, where brilliant conversation might exist side by side with shameless cruising? Where might my lady friend and I both go to have a fair chance for success in satisfying our divergent but mutually supportive habits of social intercourse? Elaine’s? McSorley’s? The Eagle’s Nest? Maxwell’s Plum? Le Jardin? We think not.

Variety, that spice of life, was oddly enough the exclusive domain of Max’s Kansas City. No matter how awful the crowd was, and it was in recent years heavily intolerable, one might still expect the occasional nuggets of intelligence and/or beauty. A Junkie might try to steal one’s coat, the men’s room floor might be awash with urine, the la­dies’ room might be filled with preening boys, a person of indeter­minate gender might stumble across one’s table in the torpor of a seventh Quaalude, and yet quite often some­thing else might happen to tip the scales of enjoyment the other way.

Max’s heroically mixed quality had, after all, led to such meetings as Alice Cooper and Lou Reed, Candy Darling and Divine, Andy Warhol and Valerie Solanas, Sargent Shriver and Jackie Curtis, meetings which might not have a settings today. And although one could not immediately recall any of the great things which had been said there, one was nevertheless confident that they had been said, and even though in the annals of memory the great nights had all merged into one vague recollection, one knew that there had been nights of greatness. Yes, when it was bad it was very, very bad, but when it was good it was fabulous. What happened?

According to Mickey Ruskin “any club starts off at the top and works its way to the bottom.” Mickey saw Max’s heyday near the beginning 10 years ago as corresponding to the Golden Age of Hard Edge and Color Field Painting, and his biggest thrill was not when Mick Jagger or Robert Kennedy walked through his door, but when de Kooning slipped in almost unnoticed.

Where the stars gather the mobs are sure to follow and the stars are forced to move on. For years though, Max’s was perversely successful in terms of exclusivity, no because you had to be somebody to get in, but because the stars weren’t bothered, and because of Mickey Ruskin’s lower East Side sphinx quality at the door every night and because of the authority with which he wielded such deadpan phrases as “It’s too crowd­ed, come back in an hour girls.”

“Can I see your I.D.?” or the ever­-popular “Sorry, couples only,” to singles and couples alike.

Perhaps Mickey wanted his place in the sun with his children and his wife and his ex-wives and his friends, and found it increasingly boring to come in every night when in his mind he was left with “the hangers-on of the hangers-on.” He was openly con­temptuous of the latter day glitter kids and used to throw out the New York Dolls all the time just a year ­before they became the place’s most famous regulars. But even to the ­end, Max’s was a place where Alice Cooper, David Bowie, or Mick Jagger could drink in relative peace, and where a good customer could feel at home

Aside from the large debts incurred by Mickey’s failed attempts at expansion (Max’s Terre Haute, a singles-type place uptown, and Levine’s, a Jewish-Canadian cuisine restaurant-bar opened in partnership with artist Les Levine and intended to shelter Mickey’s original painterly crowd after the accession of the Factory demimonde at Max’s), there was also the case of the Max’s Kansas City Credit Plan.

Many, many people ran up tabs, some great and some small, and Mickey in his ghoulish deadpan would constantly threaten them with the law. 86 or death, but never was it said that Mickey went through with ­any such measures, particularly with friends and regulars. At any ­rate, Mickey’s fiscal policies did contribute some fine moments. He knew how to run a joint by barter. It was almost Art Welfare. Plenty of people actually lived off the barbecued ribs, fried chicken, and chile served free at the afternoon Happy Hour. One wonders where they’re eating now.

For the last few years, Mickey stayed away from Max’s more and more, holed up in the mountains, flying to the Coast, or touring in Florida with Max’s softball team. Meanwhile, numerous circles and sub-circles of the New York nether­world drifted through that space, making Max’s on Saturday night an almost impassable jungle of the lat­est mutations in nightlife cultures all decked out in their artifacts. Horrible? Of course, but not without its fascinations, even to the last. Still, the interlude of Sicilian cuisine was not a pretty sight and friends gener­ally stayed away. One did not blame Mickey when, with the help of diarist Rene Ricard, he oh so tenderly took down the historic landmark red fluorescent installation by Dan Flavin from its corner of the back room. That was really the end of Max’s.

Supposedly the big lesson we learned in the ’60s was that Art is Anything. Could that have been a ruse? An excuse for the intrusion of certain techniques of Abstract Expressionism and Minimalism into workmanship and marketing? Ob­viously if that lesson had been learned well Mickey Ruskin would have been recognized as a Restau­rant Artist, he would have been reviewed in the Times and inter­viewed in Art Forum, and when Max as was beset with financial difficulties, the New York State Council of the Arts would have declared Max’s Kansas City a work of Art, the greatest example extant of The Golden Age of Hard Edge and Color Field Dining and Drinking, not to mention its contributions to Pop Art nightlife, and Mickey could have received grants, and Vice President Rockefeller would own a booth and Frosty Meyer’s drinking tab would have been taken care of in perpetuity in exchange for the fiberglass worm hanging over the middle room, and John Chamberlain and Larry Poons and Neil Williams and all the Abstract Expressionist Heterosexual Alcoholics would have their own bar stools and all they could drink and the Flavin light in the back room could have been declared a land­mark by the City of New York and receive electricity free in perpe­tuity.

Is the closing of Max’s Kansas City an act of political terror by the forces of Art Detention? Who is Donald Soviero and why  didn’t he pay the light bill? If the New York State Council on the Arts, the Ford Foun­dation, Governor Carey, Collector Rockefeller, or anyone in their league of appreciation were to express interest in Restaurant Art, a first step could be made toward establishing Max’s Kansas City as a Private Non-Profit Funded Institution with credit for all members and Mr. Ruskin as curator. Max’s would be not unlike a museum, to a limited extent the principle patrons of the club would be considered The Col­lection and to a certain degree they would be on exhibit to the public who would be strictly limited in access, paying full prices, and observing the “couples only” rule whenever nec­essary.

If you are interested in the ideas of Socialized Nightlife or Art Welfare keep the letters coming. Remember, “Billions for tequila but not one red cent for defense!” 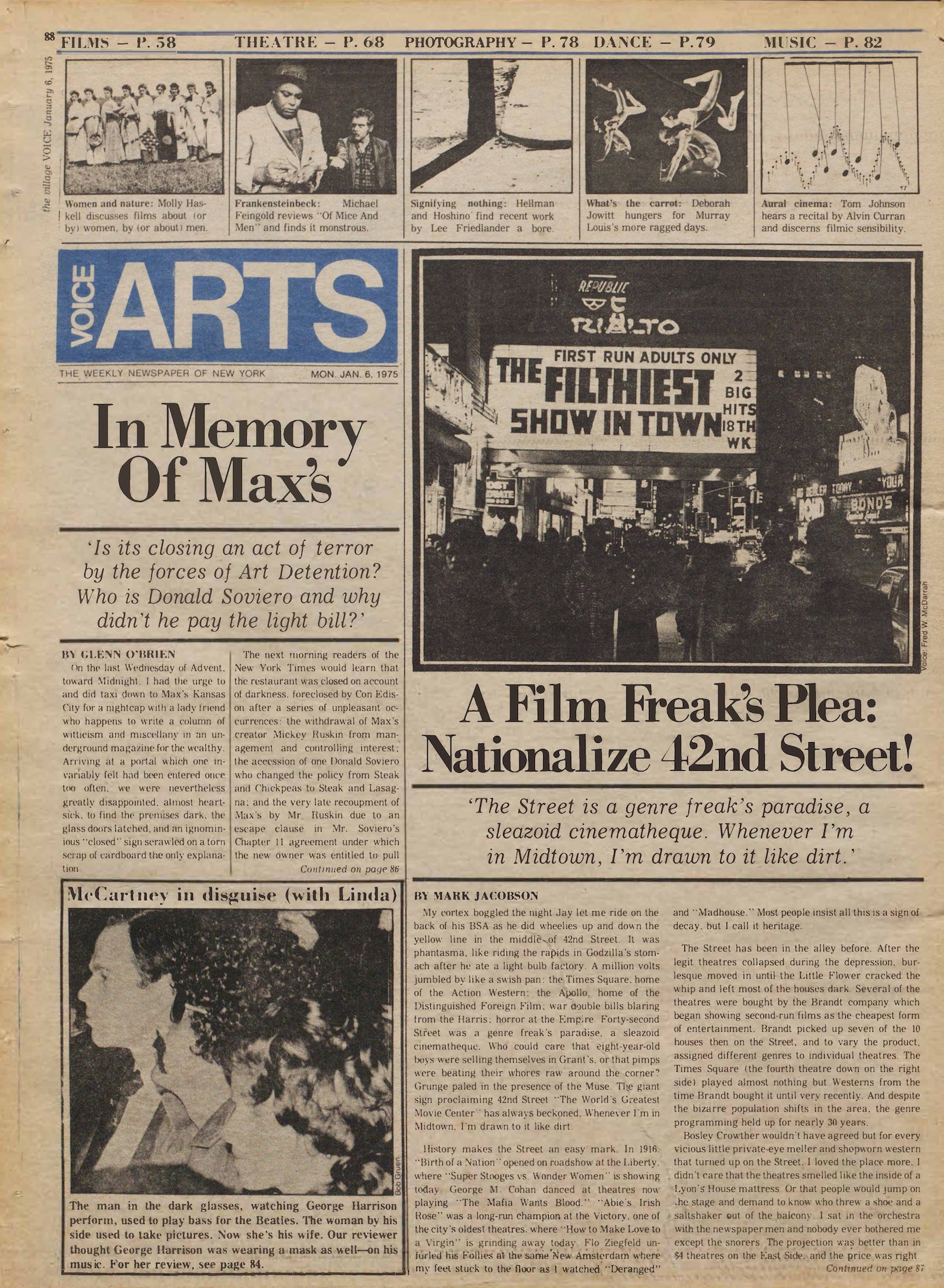 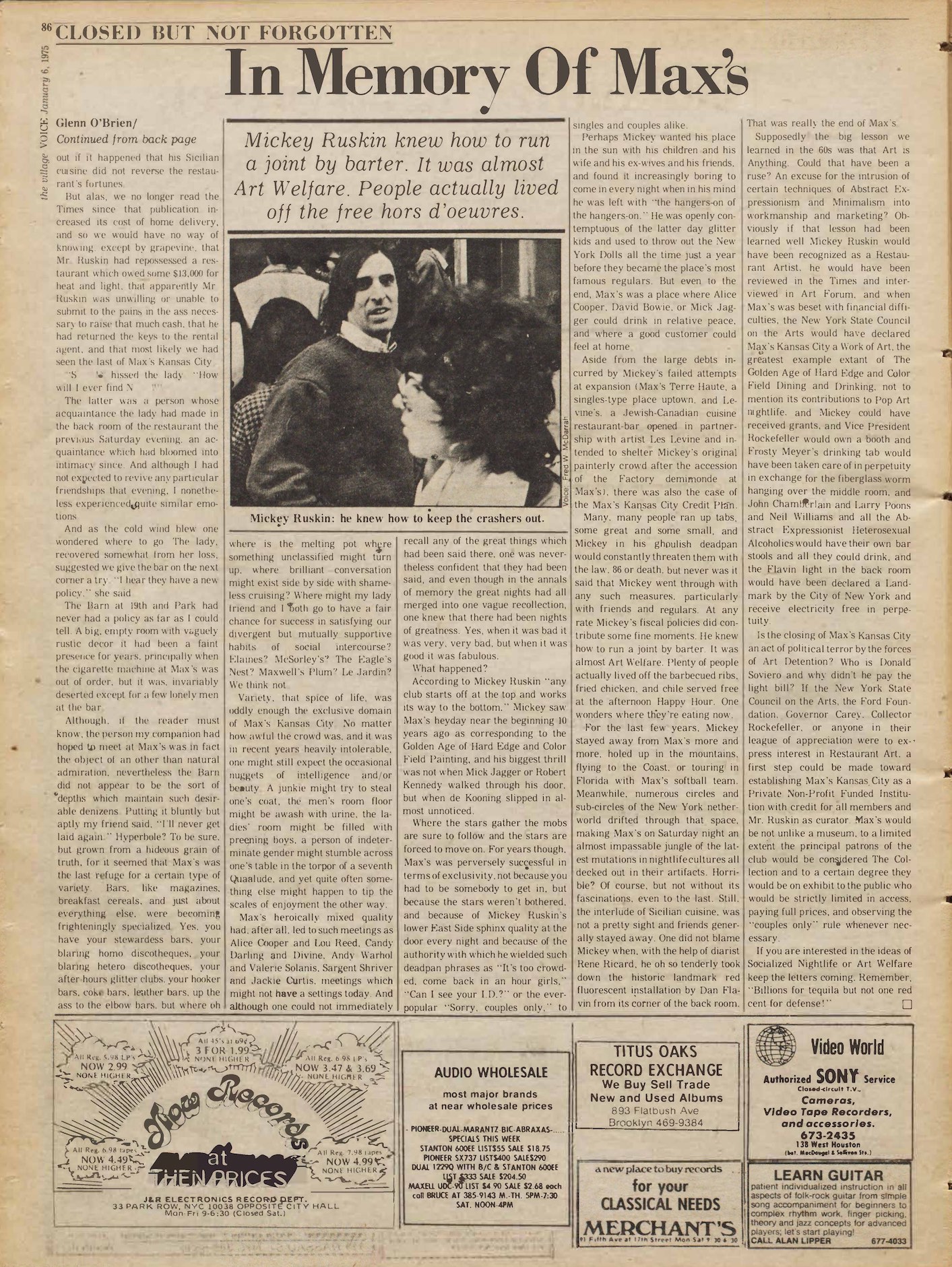