Herewith, 50 freeze-dried maxims to ponder before you start celebrating

1. A conservative is a man who does not think anything should be done for the first time.     Frank Vanderlip

2. A liberal is a radical with children and a house.

3. A politician is an arse upon/which everyone has sat except a man.     ee cummmgs

4. A reformer is a guy who rides through a sewer in a glass-bottomed boat.     Jimmy Walker

5. Abstain from beans.     Aristotle (From ancient times this phrase has been subject to two interpretations: 1) Don’t eat beans: they’ll make you fart. 2) Don’t take part in politics [beans were used to cast your ballot in ancient Greece]. Actually, of course, the two meanings are the same.)

6. An honest politician is one who, when he is bought, will stay bought.     Simon Cameron, Republican boss of Penn­sylvania, about 1860

7. An important art of politicians is to find new names for institutions which under old names have become odious to the public.     Talleyrand

8. At three o’clock Thursday afternoon
THEODORE ROOSEVELT
will walk on the
WATERS OF LAKE MICHIGAN
Handbill printed by opponents of TR during the Republican National Convention of 1912.

9a. Don’t any of you realize that there’s only one life between this madman and the White House?     Mark Hanna, 1900 (referring to Teddy Roosevelt’s nomination for the vice-presidency)

9b. Now look, that damned cowboy is president of the United States!     Mark Hanna, 1901 (after the assassination of McKinley.)

11. Every Republican candidate for president since 1936 has been nominated by the Chase National Bank.     Robert A. Taft, 1952

12. Every time I bestow a vacant office I make a hundred discontented persons and one ingrate.     Louis XIV

13. Everybody is talkin’ these days about Tammany men growin’ rich on graft but nobody thinks of drawin’ the distinction between honest graft and dishonest graft.     State senator George Washington Plunkitt of New York and Tammany Hall, 1905

15. Generally, young men are regarded as radicals. This is a popular, misconception. The most conservative persons I ever met are college undergraduates.     Woodrow Wilson

16. I always voted at my party’s call
And never thought of thinking for myself at all!
I thought so little, they rewarded me
By making me the ruler of the Queen’s navee!
W. S. Gilbert, H. M. S. Pinafore

18. I never trust a man unless I’ve got his pecker in my pocket.     Lyndon Baines Johnson

19. Henry Clay: I would rather be right than be president.
Speaker of the House Thomas B. Reed, in reply to Clay’s words: The gentleman need not worry. He will never be either.

20. It could probably be shown by facts and figures that there is no distinctly native American criminal class except Congress.     Mark Twain, 1894

21. It is a fine thing to command, though it be but a herd of cattle.     Spanish proverb

22. It’s all so solemn. Somebody will get up and say: “I thank the gentleman for his contribution,” when all the guy did was belch or gargle. Now I’m all for back-scratching, but I’d like to see a wink once in a while.     Representative James Tumulty, Democrat of New Jersey, 1955.

25. One out of four U.S. Senators is a millionaire.     AP report, 1971
In the highest lowest places O
I’ve heard that premise defended:
Rich men can’t be bought: No!
(But they can be rented.)
Tuli Kupferberg

26. Open each session with a prayer and close it with a probe.     Representative Clarence Brown, Republican of Ohio.

29. Socialism changes its color according to its environ­ment. For the street corner and the clubroom it wears the flaming scarlet of class war; for the intellectuals its red is shot with tawny; for the sentimentalists it becomes a delicate rose-pink; and in clerical circles it assumes a virgin-white, just touched with a faint flush of generous aspiration.     Ramsay Muir, 1925

31. That the politicians are permitted to carry on the same old type of disgraceful campaign from year to year is as insulting to people as would be a gang of thieves coming back to a town they had robbed, staging a parade, and inviting citizens to !all in and cheer.     Edgar Watson Howe

32. The dispensing of injustice is always in the right hands.     Stanislaw Lee

33. The necessary and wise subordination of the military to the civil power will be best sustained when lifelong professional soldiers abstain from seeking high political office.     Dwight D. Eisenhower

34. The only crack that got under his skin was Secretary of the Interior Ickes’ comment that “Wendell Wilkie is just a simple barefoot Wall Street lawyer.”

35. The politician who steals is worse than a thief. He is a fool. With the grand opportunities all around for a man with political pull, there’s no excuse for stealin’ a cent.     George Washington Punkitt

36. There is always some basic principle that will ultimately get the Republican party together. If my observations are worth anything, that basic principle is the cohesive power of public plunder.     Senator A. J. McLaurin, Democrat of Mississippi, 1906.

37. Things are more like they are now than they ever were before.     Dwight D. Eisenhower

39. Upon the slightest resistance, at the first word of complaint, to be repressed, fined, vilified, annoyed, hunted down, pulled about, beaten … sold, be­trayed … bound, imprisoned … judged, condemned, banished … shot … sacrificed … that is to be governed.     Pierre Joseph Proudhon

41. We always contribute to the funds of the political parties for their election campaigns in the states. Where the issue is too uncertain the (sugar) trust subscribes to the funds of both parties, in order to have some influence on the winning side, whichever it may be. Henry O. Have­meyer, 1951

42. We fight in honorable fashion for the good of mankind; fearless of the future, unheeding of our individual fates, with unflinching hearts and undimmed eyes; we stand at Armageddon and we battle for the Lord!     Theodore Roosevelt, 1912

44. The constitution provides for every accidental contin­gency in the Executive — except a vacancy in the mind of the president.     Senator John A. Sherman, Republican of Ohio.

45. What a man that would be had he … the least knowledge of the value of red tape.     Sydney Smith

46. When change of rulers happens to a state
‘Tis but a change of name unto the poor.
Phaedrus, about 25 B.C.

47. Who are they, as bats and night bogs, askant in the Capitol?
Are those really Congressmen? are those the great judges? is that the President?
Then I will sleep awhile yet — for I see that these States sleep.
Walt Whitman, To the States, 1860

48. Ye could waltz to it.     Finley Peter Dunne, referring to the oratory of Senator Albert J. Beveridge, Republican of Indiana.

49. You don’t set a fox to watching the chickens just because he has a lot of experience in the hen house.     Harry S. Truman (on Vice-President Nixon’s candidacy for the presidency, 1960)

This article from the Village Voice Archive was posted on November 8, 2020 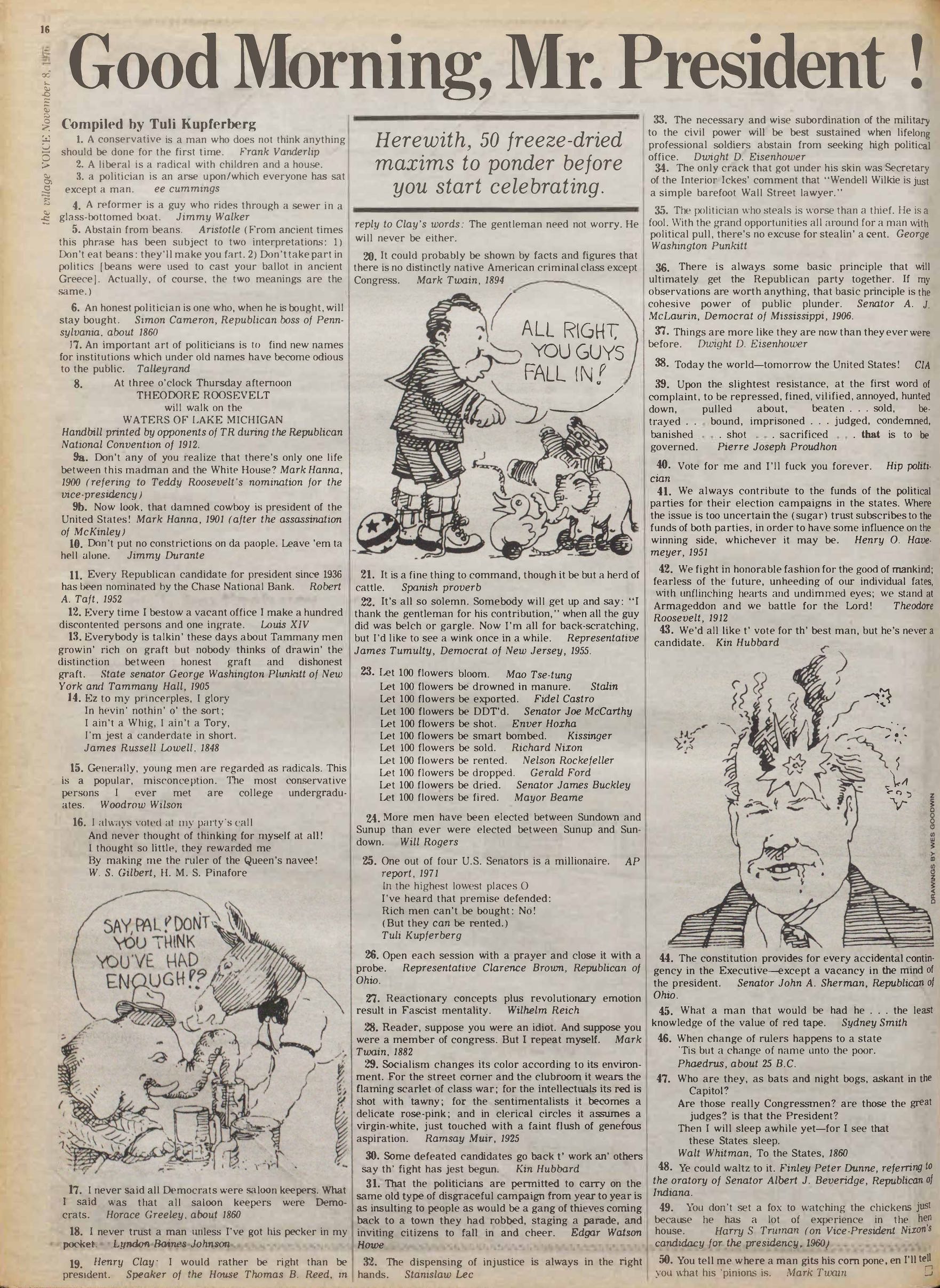