In the last 10 days I have read about 20 sophisticated articles analyzing the results of the 1968 elections. Most of these pieces of punditry contained the same two assumptions — which I believe are misleading, and perhaps paralyzing, illusions.

One is that the election returns are proof of a sharp veering to the right by the electorate. And the other is that the future hope of liberal politics rests with the “new politics” Democrats. I disagree with both these interpretations.

First, George Wallace ran much weaker than most of us anticipated. He carried only five Southern states, for a total of 45 electoral votes. He failed to get the bit white working-class vote in the industrial backwaters of Gary, Boston, Pittsburgh, and Detroit. And he did not carry any of the border states such as Kentucky, Maryland, or Texas, that his supporters hoped he would.

Second, most of the incumbent anti-war Senators and Congressmen were re-elected, despite Nixon’s strength at the top of the ticket. The only really outstanding Congressman to lose was John Dow of New York. And he was elected in 1964 because of the Goldwater debacle, and was re-elected in 1966 only because the Conservative Party in his district ran their own candidate, rather than endorsing the Republican. In the Senate, two incumbent. doves — Wayne Morse and Joseph Clark — lost. But I think they lost not because of their prophetic opposition to the war, but because o( their own prickly personalities, and Morse also lost because Nixon swept Oregon. Fulbright was re-elected, however, even though Wallace took Arkansas, and McGovern won, even though Nixon took South Dakota.

Perhaps more revealing of the mood of the voters was that three pro-war, conservative incumbent Democrats lost their Senate seats — Mike Monroney in Oklahoma, Frank Lausche in the Ohio Democratic primary and Daniel Brewster in Maryland, to young, anti-war Republican Charles Mathias.

And most significantly, I think, were the insurgents who won Congressional races. Harold Hughes, the populist, colorful Governor of Iowa, won his Senate race even though Nixon won by a landslide statewide. Allen Cranston beat right-winger Max Rafferty for the Senate in California. And 39-year-old Tom Eagleton, an early supporter of Robert Kennedy, was elected to the Senate from Missouri.

And in New York, although most of the comment has gone to the Conservative Party’s one million votes, three remarkable freshmen were elected to the House — Edward Koch, Allard Lowenstein, and Shirley Chisholm (in Bedford-Stuyvessnt).

My second point is based more on speculation and theory than on hard evidence. Many liberal observers are relatively sanguine that the “new politics” coalition can now easily move to consolidate control of the National Democratic Party. And, although it might seem to follow from my first optimistic interpretation, I don’t believe this for a minute.

For one thing, I don’t know what “new politics” means. On the Sunday before the election, I heard Jacob Javits define new politics as “problem solving.” Jesse Unruh and Jack English say they are for new politics. But they are just suburban liberal bosses.

It will not be easy at all for McCarthy, McGovern, or Teddy Kennedy to win the nomination in 1972 without the backing, not just of Unruh, but of Daley and John Connally as well. It is necessary to recall, for example, that Daley actually wanted Teddy Kennedy nominated in Chicago last August.

I think the focus of what is labeled the new politics should be primarily on movements and issues, and only peripherally on candidates. What most people call the new politics, I call guerrilla politics. Which is different from guerrilla warfare. For the immediate future, I think we have to move freely and quickly in and out of institutions and political parties. The priority is to build a movement against the draft, against the power of the military, and for decentralization and community control. Forget McCarthy or Teddy Kennedy — the pornographers of power will gravitate to them. As Dylan says, “Don’t follow leaders, watch the parkin’ meters.”

In most cases, the Democratic Party is still going to be the enemy of serious change. In New York City, for example, it is already clear that Congressman James Scheuer, an early McCarthy supporter, is running for Mayor on the bitter ashes of the school strike as super-Jew, for law and order, and against decentralization. When that happens, I am for John Lindsay, and I would hope the people who worked for McCarthy would also be for Lindsay.

What I am saying, finally, is that political parties, unions, churches, and personalities, will mean less and less in the future. Guerrilla politics with its emphasis on movement and its commitment to issues, is the best antidote to the banality of Nixon. But first, we must puncture the myth that the election was a mandate for reaction. ❖ 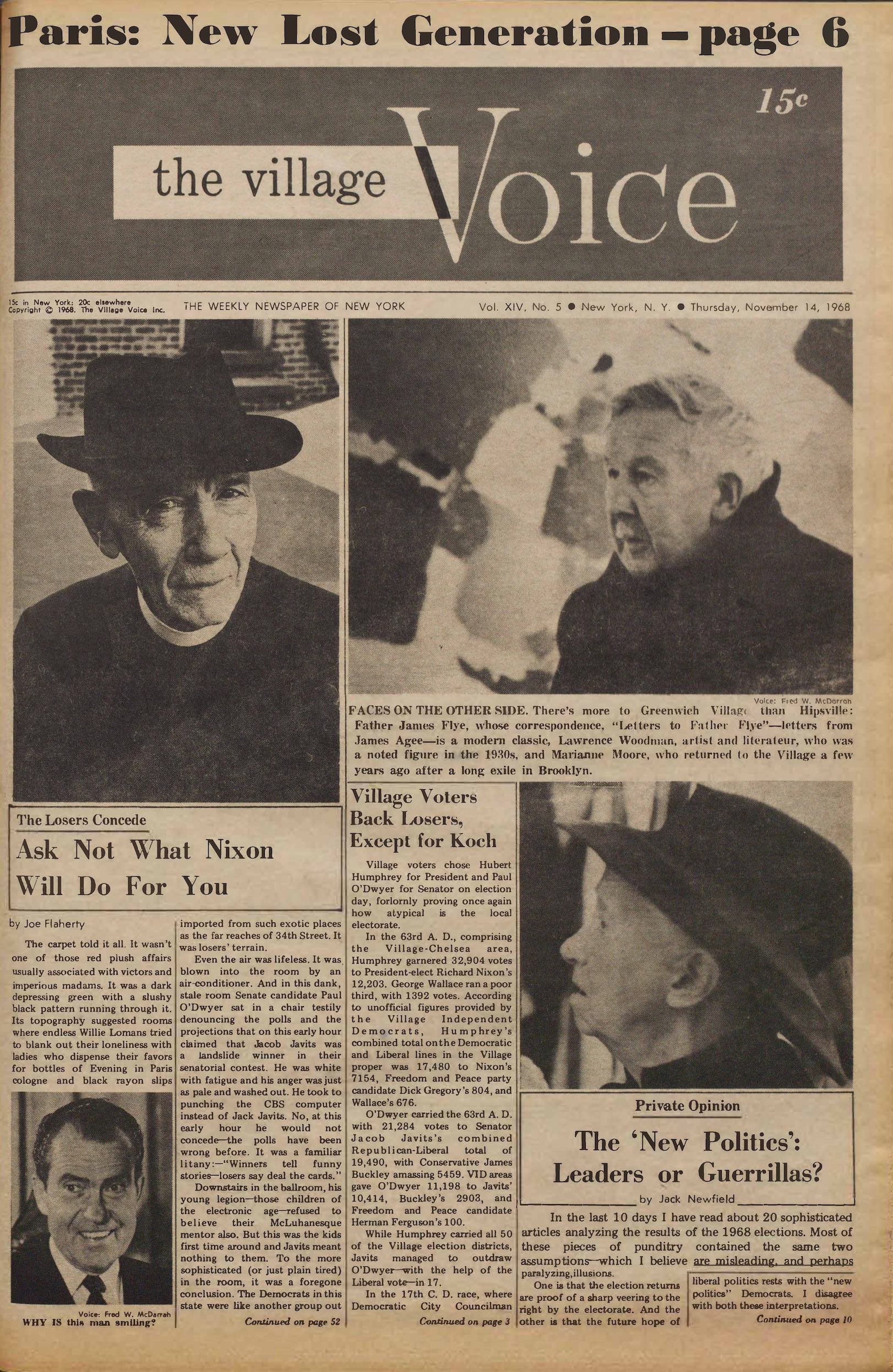 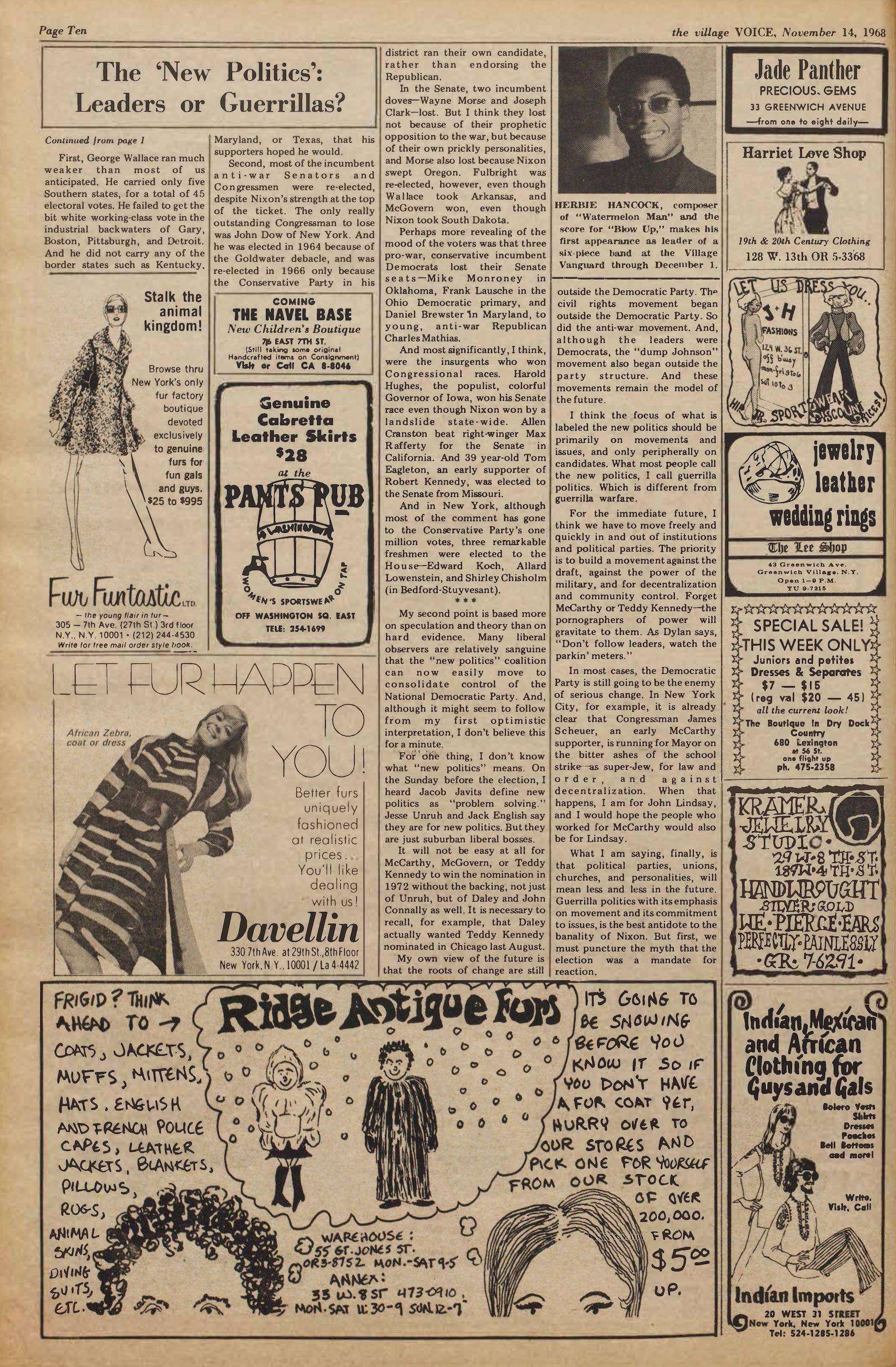