By now, the Clarence Thomas affair has taken on the quality of a cat scratching for a place to bury its turds. The purring noises from the White House hid a determination to keep such matters under wraps. “I was thinking of my little grandchildren hearing some of the graphic sex allegations,” George Bush burbled late last week. How much safer to deal with such “messy situa­tions” behind closed doors. “I think some­times when you get to subjects that are sensitive, it is well to delegate to your elect­ed officials” — those same honorable men who covered up Anita Hill’s charges until a timely leak and a phalanx of women from the “lower” house forced the Senate to act.

Kicking up the kitty litter, Bush confided that he’d been “glued” to the set, but also observed that what he saw “was deeply offensive to American families.” In one breath, he acknowledged “the legitimate problem of sexual harassment,”  and in the next, disparaged “women activist feminist groups … I don’t think they speak for all women in this country.”

Here was the backlash in full force, and the Republican strategy of attack-and-deny laid bare. Its aims go well beyond the im­mediate issue, and as Thomas was sworn in, Poppy’s claws came out. Sexual secrecy was only one of his demands. While the president squatted above the fray, his min­ions called for a purge — not just of liberals, described by Thomas as “the old order,” but of feminists, especially in media.

Among the targets were Nina Totenberg of National Public Radio, who had helped break the sex-harassment story, and Mau­reen Dowd of The New York Times, whose commentary brought a feminist perspective to the world’s most powerful men’s club. That must have frightened Poppy and his peers even more than Anita Hill’s charges: Here was a network of women journalists speaking truth to entrenched male power. The right lost no time in demanding their heads.

“I perceive a total perceptual split be­tween the chattering classes … and normal humans,” wrote Peggy Noonan, former speech writer for Reagan and Bush. On the Times‘s op-ed page, Noonan raised the fa­miliar specter of Republican populism — in which hard-working, family-oriented Amer­icans are pitted against a perverse and de­tached liberal elite. Warming to the task, Noonan compared a “Maybellined” wit­ness for Judge Thomas with a friend of Hill’s “who spoke with a sincere, unma­keuped face,” Noonan was echoing a pow­erful — if subliminal — tactic in the assault on feminism: dyke-baiting.

Inevitably, the Thomas hearings became fodder for the roiling p.c. debate. Anyone who doubts that this word has become a cudgel for feminist-bashers should examine the Wall Street Journal’s editorial of Octo­ber 17, attacking “the state of political cor­rectness in the nation’s newsrooms.” The Times stands indicted for “total capitula­tion” by turning “its front page over to editorials by Maureen Dowd.” Elsewhere on the same editorial page, the Journal‘s Washington bureau chief challenges Nina Totenberg’s claim that she left the now-­defunct National Observer because of sexu­al harassment. (The real reason was plagia­rism, her former editor opines.) Both the Observer and the Journal are owned by Dow Jones, which may be why the editorial railed against “the catechism … that no charge of sexual harassment can ever be overblown or even plain wrong.” But male bonding, even more than any corporate tie, underlay the editorial’s defense of Juan Williams, a Washington Post writer who had slammed Thomas’s accusers, though he stands accused of sexual harassment bv sev­eral female colleagues. Quoth the Journal: “Free Juan Williams.”

Though the Democrats were widely ac­cused of wimpiness, the more enraging pos­sibility is that they were actively ambiva­lent about Anita Hill’s charges, just as the Democratic party is patently wary of femi­nism. The Republicans are just as anxious but far less held back, and the image of Alan Simpson thrashing, Orrin Hatch glar­ing, and Arlen Specter threatening, were a frieze of male panic and its reaction-forma­tion, rage.

But if feminists regard the Thomas hear­ings as a failure, the right truly will have won. In reality, this was an annunciation of a new, gender-based politics, with the po­tential to challenge the traditional configu­ration of left and right, which is based on a much older model of class. Feminism doesn’t fit into American politics as cur­rently practiced: at its most fundamental, it transcends class, defies racial and regional interests, and enters into virtually every public institution, as well as the most inti­mate interactions. No one can escape sexu­al politics — yet no one knows precisely what they are.

This suggests why the old order — not Thomas’s version but male-dominated con­servativism — was able to strike back so ef­fectively. Anita Hill’s testimony threatened not just relations between dudes and babes; it shook the very basis of American politics, and demanded that the system incorporate issues of gender along with those of race and class. No wonder the European press saw the hearings as “a great American psy­chodrama” (Le Monde), “humiliating for a great democracy” (Il Giornale of Milan): no other Western society is as willing as the United States to alter the sexual order.

A truly bi-gender system world bring American politics closer to human nature. And the Thomas hearings were a gauge of just how much feminism has changed the alignment-scheme, redefining words like progressive and conservative. It’s clear from the struggle for reproductive rights, the at­tack on political correctness, and the re­sponse to sexual harassment, that the time has come to affix a new label to anti-femi­nist liberals: call them social conservatives.

This evidence of a new politics is one reason I’m convinced the Thomas hearings are a watershed for the women’s movement. Another is the emergence of a genu­ine hero: Anita Hill. Her refusal to play the victim, and her ability to withstand trial­-by-fulmination, epitomizes the dissemina­tion of feminism. Women across the coun­try, in a variety of occupational settings, now share a common sensibility. Although that perspective is most evident in the pro­fessions (as the strong support for Thomas among working-class women suggests), if feminism is true to the experience of all women, it will eventually overcome the barriers of caste.

It remains to be seen whether social con­servatives will nip the concept of sexual harassment in the bud. Polls show that most people think erotic innuendo should not be regulated by law. But the same ma­jority agrees that there is such a thing as sexual harassment, and that it ought not to be tolerated. This contradiction has yet to be resolved in laws. Meanwhile, the Thomas hearings produced a flood of complaints from women, inaugurating a great debate on the subject and its relationship to power. All of which presents a profound opportu­nity for feminists to organize women around yet another dirty secret, and in the process foster social change.

To shift the status quo — especially when it is grounded in the libido — is a monu­mental struggle. And the secret appeal of right-wing reasoning, with its conflation of freedom and male power, decency and re­pression, “common sense” and sexual or­thodoxy, can never be underestimated. But there is solace to be found in the social struggles of the past. The labor movement is in no great shakes today, but there was a time when the very idea of organizing workers was regarded as a violation of “natural law.” The propaganda was fierce, the backlash was formidable, and there was significant resistance among workers them­selves. At the darkest moment, a labor lead­er was framed for murder and sentenced to execution. He, too, was named Hill, and his last words pass easily from Joe’s mouth to Anita’s: “Don’t mourn. Organize!” ❖ 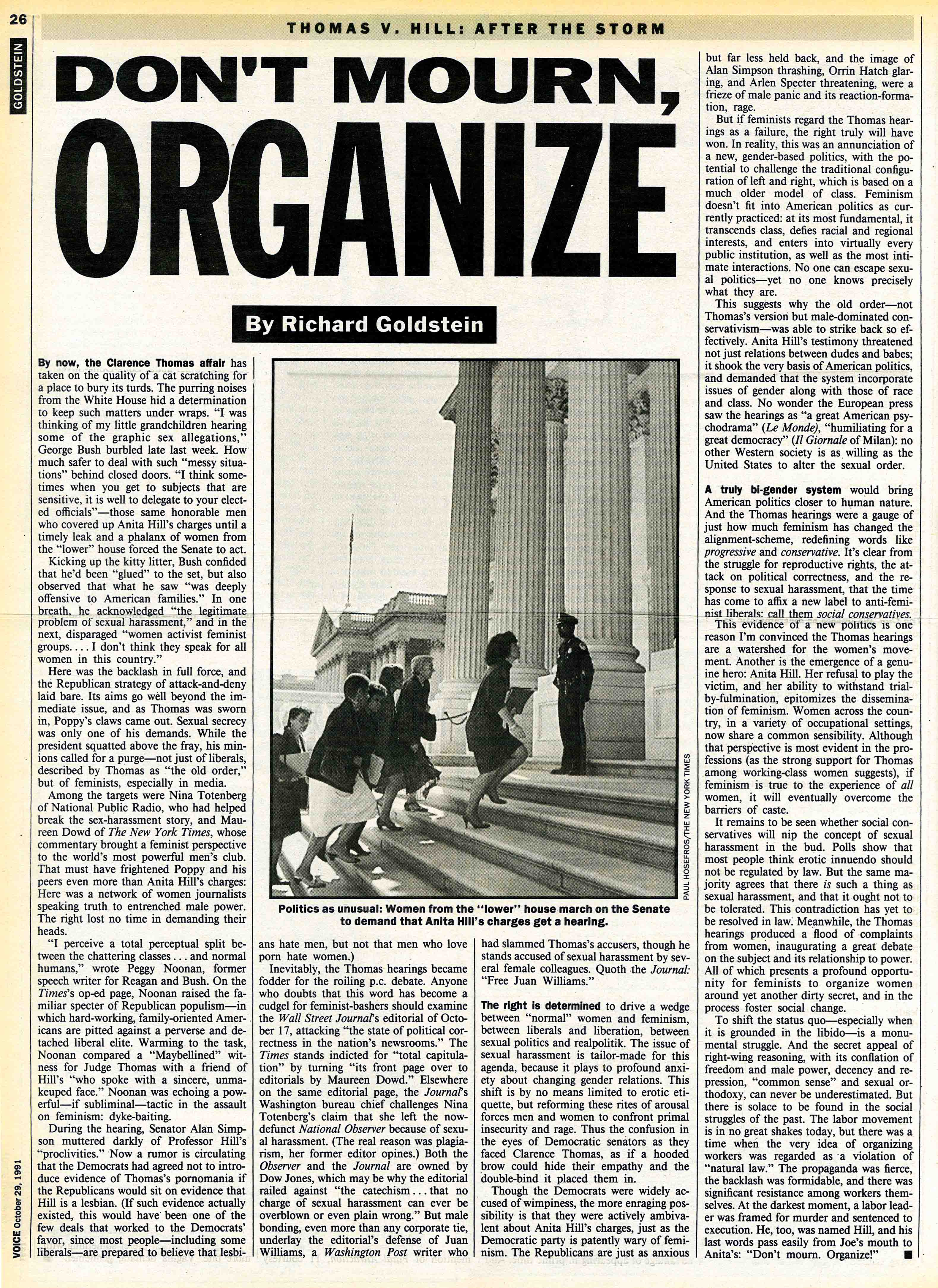