The Trial of the Chicago 7: The Ringmaster is Sitting on the Bench

CHICAGO — An impressive ragout of the Legal Left poured into Chicago Monday, caucused, picketed, caucused, and came away with a major victory: contempt charges against four defense attorneys were abruptly dropped by Judge Julius J. Hoffman in the Chicago “Conspiracy Eight” trial. “We have changed the entire complexion of the trial,” exulted Michael Kennedy, one of the lawyers cited by Hoffman for withdrawing from the trial by telegram instead of in person. “The judge collapsed completely. He painted himself into a corner. If they ever try to bust another attorney, in Pig City or anywhere else, we’ll be there.”

Briefcase Power in the streets. At least on the sidewalk. One hundred fifty lawyers from all over the country — crying “foul” at Hoffman and the trial — picketing the Federal Courthouse. Motions filed, letters presented, and petitions signed demanding an end to “the travesties of justice” in Hoffman’s courtroom. Committees formed, to “stop the trial,” to impeach Judge Hoffman, to organize more actions. A half dozen press conferences. Confrontations with federal marshals. And a mini-drama with Chief Judge William J. Campbell, who descended robed from his skyscraper chambers with the court reporter, marshals, and a clerk to order the lawyers out of the glassed-in lobby. (Since all had signed an amicus curiae brief, condemning the proceedings, the lawyers claimed they had “official business” in the building and requested a larger courtroom to accommodate their numbers.)

Lawyers marching outside, sifting through the heavily guarded building, caucusing at the Pick-Congress Hotel while 74-year-old Judge Hoffman, looking like a dehydrated Elmer Fudd, lurched on through the trial in the small antiseptic courtroom on the 23rd floor of the federal building. And throughout the day, machine-gun indictments from lawyer after lawyer: “The trial is a farce,” “The trial is a charade,” “The trial is an outrage,” “The trial must be stopped.”

Since the trial opened last Wednesday, lawyers and observers have been stunned by Hoffman, by his overt hostility to the defendants, by his rejection of routine defense motions, and by his denial of fundamental constitutional rights. Leonard Weinglass, one of the two trial attorneys, had been cited for  contempt for his opening statement. William Kunstler, the other lawyer, was sharply admonished for describing the judge’s reading of the indictment as “prejudiced.” And Hoffman had refused to postpone the trial on account of the illness of Charles Garry, a third attorney, now in the hospital recovering from a gall bladder operation. Bobby Seale, one of the eight defendants, then dismissed all his attorneys until he could be represented by Garry, the West Coast Panther lawyer.

The whopper, however, had yet to come. Four other lawyers, retained for pre-trial work and motions, withdrew from the case by telegram last week. Not good enough for Judge Hoffman. If they wanted to withdraw, they had to appear in person. (One is in New York, the other three in California.) So Hoffman charged them with contempt, ordered warrants issued, and when two appeared in Chicago — one voluntarily, the other in handcuffs — he ordered them held over the weekend, without bail, until sentencing Monday. For icing, he agreed to release the attorneys if the defendants waived their Sixth Amendment right-to-counsel objections. (Hoffman later denied he ever offered such a bargain.)

It was too much — A shotgun mobilization was initiated by the National Lawyers Guild, joined by the American Civil Liberties Union, calling for a massive descent on Chicago, for a crusade for the lawyers. And late Sunday they began arriving. From New York, more than 50 loaded onto an early morning flight. They came from Detroit, San Francisco, Los Angeles, Boston, Washington. And the demonstration turned out to   be vigorous, cheerful, and unprecedented. “We have achieved a major victory,” cried Gerald Lefcourt, one of the four attorneys, when charges were dropped. “Lawyers have come to Chicago from all over the country, and the judge has crumbled under this massive pressure.”

Not surprisingly, however, there was disagreement on the nature of the attack on the trial. ACLU members preferred to confine their complaints to civil libertarian issues. The more radical Lawyers Guild wanted some political mileage out of the trial, to use it to dramatize more generalized issues. The slogan “Stop the Trial” was adopted at an afternoon caucus, but with less than enthusiasm by the ACLUers. In addition, a return action was set for October 17, with the aim of broadening the base of support and shifting the focus from the protection of attorneys to the exposure of other legal-political repressions. Such a shift may jeopardize the involvement of the ACLU.

The media has been loaded with criticism of the extra-court activism, the exotic support demonstrations — Yippies on Monday dispersed free apples — and the sartorial excesses of the defendants. But among the achievements of Monday’s gray-suited, attache-cased demonstration was one dramatic message, if there is a circus going on, the ringmaster is sitting on the bench. ❖ 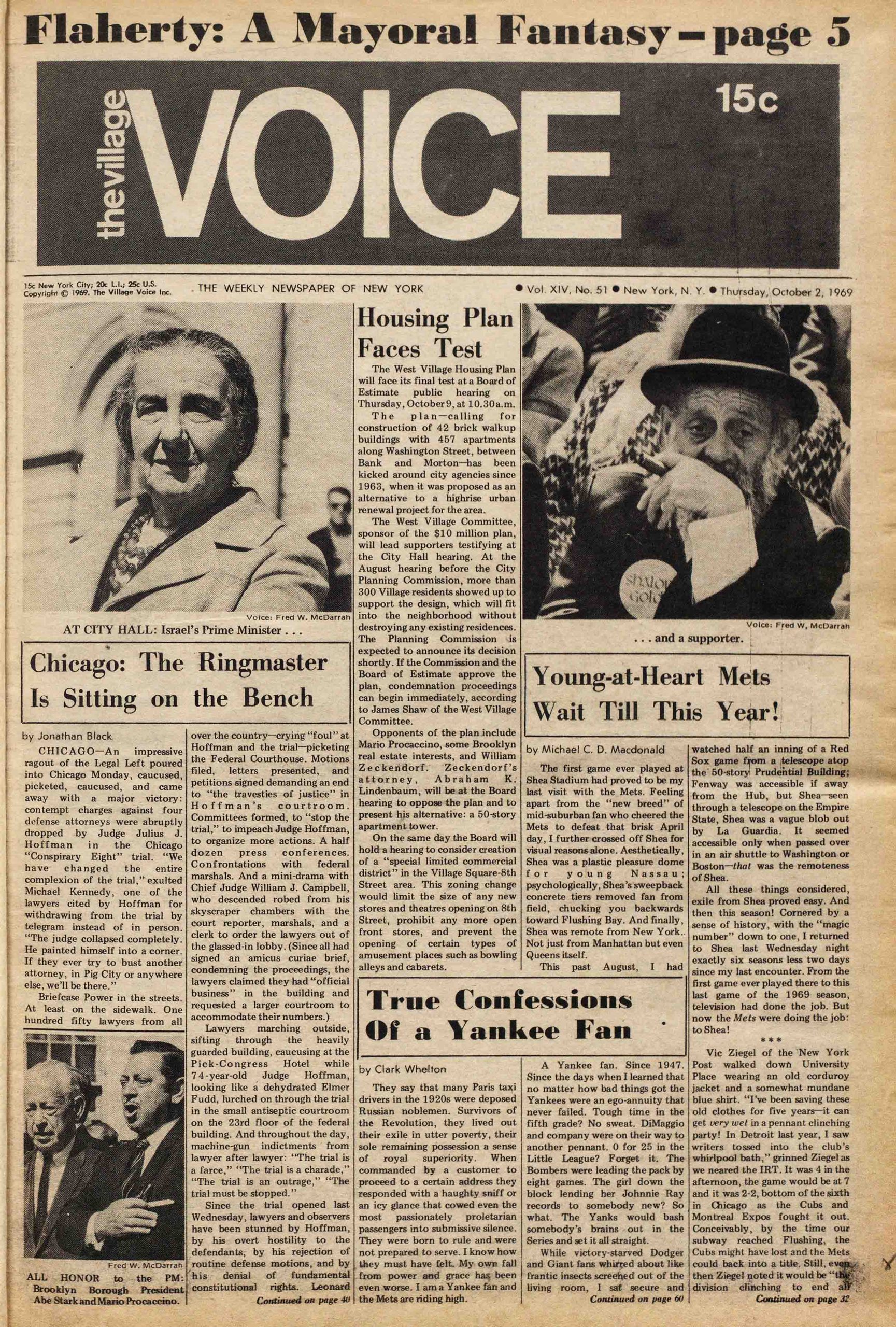 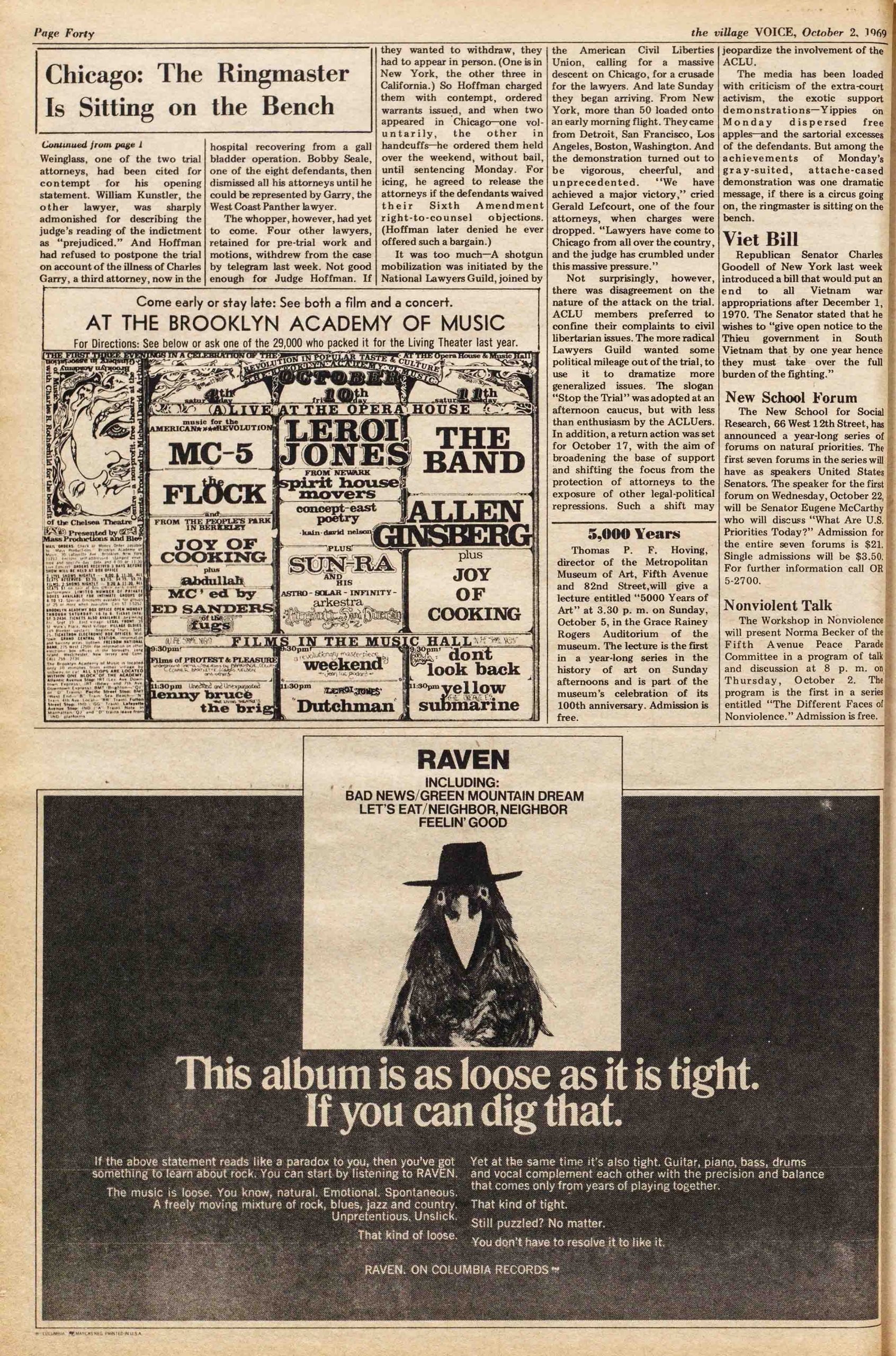