Scorpio would never have made the connection if he had not been partying all week up and down the East Side Gold Coast where, as it so happens, “The Last Tango in Paris” and “Deep Throat” are paying in scandalous proximity to each other. First, there was the much maligned Mailer party which Scorpio would not have missed for the world. Why else had Scorpio ventured forth from the comfortable womb of Brooklyn and Queens up to his precarious cliffside perch in Manhattan if not to be jostled at convocations of fame and fashion, nobility, and notoriety?

But even in the assemblage summoned to pay tribute (literally and figuratively) to the first half-century of Aquarius himself, the spotlight shone most brightly not on Aquarius nor even on the movie stars in attendance, but on Bernardo Bertolucci, the media marvel of the moment. Indeed, only Marlon Brando in his all too solid flesh could have upstaged Bernardo on that night of nights. And so Scorpio began unconsciously to forge a change of associations out of his besotted confrontations with the more lurid elements of his social and professional life. “Oh, you’re a film critic,” one elegant hostess after another would discover with visible delight. “What do you think of ‘Last Tango’ and ‘Deep Throat’?” And after a time, an exasperated Scorpio would counter the recurring question with a question of his own: “What did you think of ‘Last Tango’ and ‘Deep Throat’?” Scorpio was sick and tired and regusted. Why didn’t anyone want to talk about “The Discreet Charm of the Bourgeoisie” or “Travels With My Aunt”? Scorpio would even have welcomed an occasional digression to “Cries and Whispers.” But no, it was all “Last Tango” and “Deep Throat” and “Last Tango” and “Deep Throat.” Not that Scorpio insisted on talking about movies. He wouldn’t have minded a discussion of Lionel Trilling’s “Sincerity and Authenticity” or the devaluation of the dollar. But both the savants and the stockbrokers seemed obsessed by “Last Tango” and “Deep Throat” not so much for information as for incantation. It was as if something primal or even primeval were lurking under all the locker room banter. Scorpio began to be aware of the stirrings of a collective unconscious in the suddenly liberated East Side soirees. This collective unconscious had very little to do with the art of the cinema, but a great deal to do with the demystification of the penis, and the missing link was a young performer billed in the credits of “Deep Throat” as Harry Reems.

Who is Harry Reems? To put it as bluntly as possible, he is one of the many men who has put his penis into Linda Lovelace’s massive mouth and down her cavernous throat. This is all essentially that “Deep Throat” is about, and Linda Lovelace has emerged as a campy media celebrity of sorts simply by capitalizing on a kind of Yma Sumac eccentricity to become the Martha Raye of hardcore porn. If “Deep Throat” had remained on the 99-per-cent-male-raincoat circuit, it would have been of scant sociological concern. But thanks to Lindsay’s litigiousness, and the infinite susceptibility of the Manhattan-based media, “Deep Throat” was legitimized as a socio-cultural event, and even the good gray Times (which still cannot bring itself to print a word Marlon Brando enunciates distinctly in “Last Tango in Paris”) took “Deep Throat” seriously enough to commission an article on it for the prestigious Sunday Magazine section. Of course, no one had any way of knowing that two otherwise only marginally related media events would have exploded at almost the same time and in the same general vicinity. And only the most superficially sensational film historians would ever lump together Bernardo Bertolucci and Gerard Damiano (the unsung auteur of “Deep Throat” and the somewhat superior “Meat Ball” in which the aforementioned Harry Reems plays a more central role than that of one of the spear-thrusters in “Deep Throat”). Nonetheless, if the same audiences had not been exposed simultaneously, to the stylish but elliptical eroticism of “Last Tango” and the corny but explicit pornography of “Deep Throat,” there would probably have been fewer murmurs of disappointment about Brando’s relative reticence in “Last Tango.” Relative, that is, to the spectacular sexual gymnastics of the deliberately unheralded Harry Reems. That is to say that if the International Olympic Committee authorizes copulation as an athletic activity at the 1976 Montreal meeting, Harry Reems has to be the winter-book favorite as the U.S. entry not only for the prowess of his penis, but also for his commendably mock-comic modesty about his shockingly superior endowment. Suddenly moviegoers of both sexes have encountered through Reems the visual reality of what up to now has been merely the safely sheathed symbol of Marlon Brando’s pseudo-sensitive stud’s swagger, Burt Reynolds’s coy centerfold swagger, and Norman Mailer’s ballsy literary swagger. It is as if the swordsmen of old were ranked not by their skill in dueling, but rather by the stylishness of their scabbards. What makes Reems completely disconcerting as a potential sex symbol (even to an instant myth-maker like Scorpio) is his superb performance of sexual swordplay without any trace of sexual swagger.

But times had moved on, and the ruthless realism of the motion picture medium suddenly cast into doubt the plastic credentials of that ostentatious machismo which had mesmerized us all for so long. Scorpio was almost relieved that the long suspense was over, and that the revelation of that most vestigial of all appendages of the romantic ego turned out to be such a trifling anticlimax. Officially, Scorpio fervently hoped that the Harry Reems episode would enable men and women to join hands at long last in a shared humanity. But Scorpio would be much less than a male if he did not worry about how much longer the female of the species would continue to smile with generous inscrutability at the disparity between the swagger and the swordplay in the macho male. And can she any longer be kept down with mere rhetoric now that she’s seen Harry Reems? ❖ 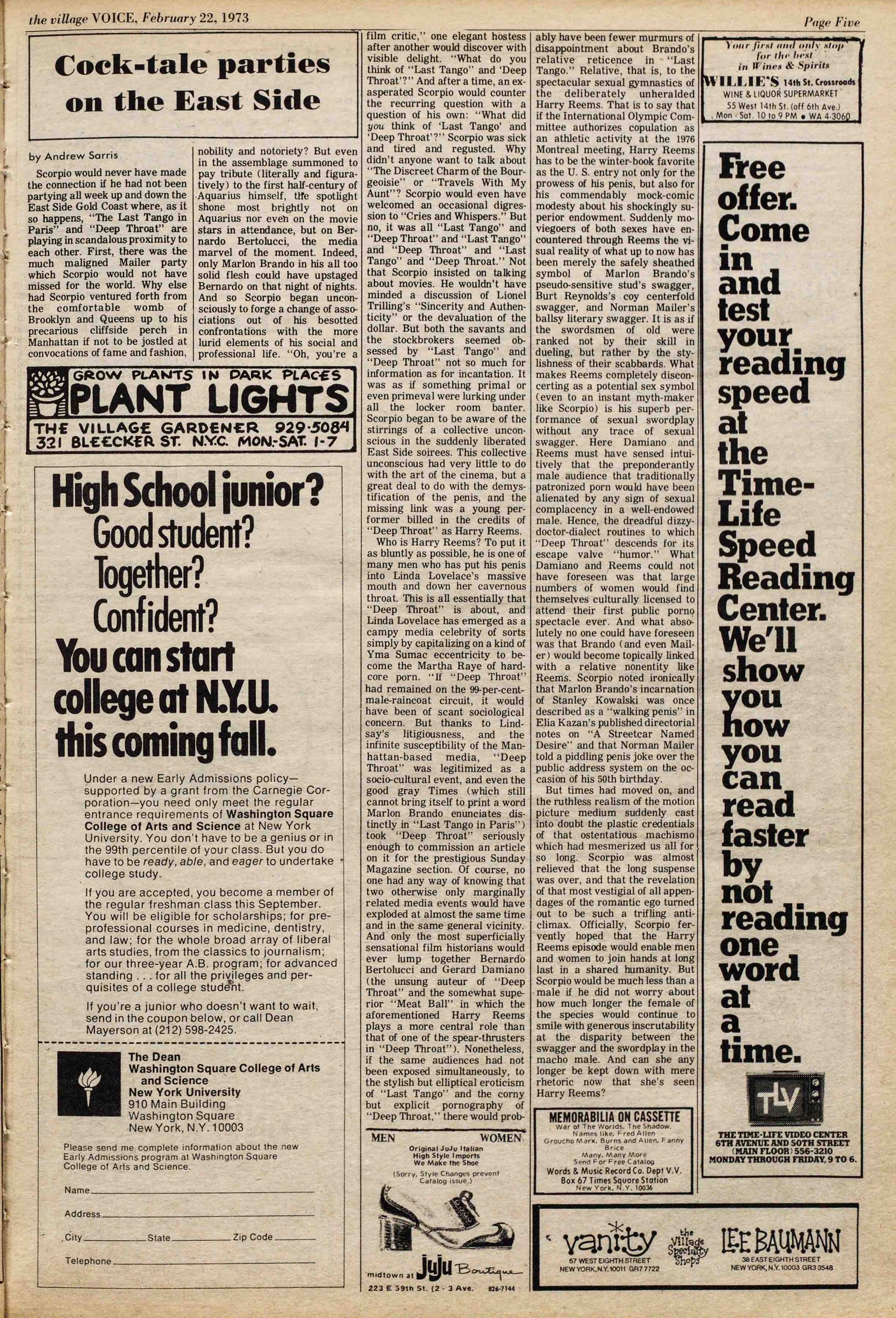