ARLINGTON, VIRGINIA — Nobody in Washington — and certainly not in a White House by now incapable of telling wheat from chaff, crisis-wise — is saying the obvious thing about Bob Woodward’s The Agenda, which is that the book itself is inconsequential. It’s not as if the fecklessness and crossed purposes with which Clinton’s rookie team brought forth last year’s budget went unreported at the time. Having the story regurgitate in Woodward’s familiar, dreadful, see-Jack-govern style is bombshell stuff if only the reader following the author’s lead, considers what everybody had for lunch to be the key detail, scandalously withheld. (It seems they all ordered the smoking gun.)

Yet inside the capital, you’d waste you time bringing up The Agenda‘s debatable merits as a chronicle, because here the book is being appraised more sportingly — as a chess piece that’s just been brought into play. While Woodward, as usual, declaims taking sides, he hardly needs to take one to be on one: in his hometown, whoever denigrates his work is instantly rated a Clinton apologist, which naturally no one cares to be accused of.

And yikes, me neither, although I do admit that The Agenda did get me feeling a certain sympathy for old spume-haired Bill, on purely humane grounds. The tip-off to how few scoops Woodward got on the policy front is that he’d  been touting the book’s inside dope about Clinton’s character, chiefly that the chief executive often blows his top in private and that he says “fuck” a lot. (Hortense, fetch my drool-cup.) The revelation of Clinton’s awesome inability to make up his mind, however, is a good deal more devastating, and the embassies concerned have presumably wasted no time telexing Woodward’s hot flash to Pyongyang and Sarajevo.

In fact, there’s nothing in the book that deserves to seriously alter anyone’s opinion, pro or con, of either Clinton or his presidency. Yet the overall effect is insidious simply because Woodward has chosen to put every nattering tidbit he culled between hard covers, thereby giving the mundane a frequently unwarranted air of the fraught. While the narrative’s flat, remote tone conceivably meets some abstract standard of reportorial objectivity, it’s scarcely neutral. True, Woodward interviewed every White House wallah worth talking to, but when their recollected watercooler squabbles are given the same weight as important developments, the one safe bet is that they’re going to sound like boobs — boobs in crisis.

Woodward recounts last year’s near debacle over the hudget as the story of an education — that is, of the newly arrived Clintonites’ “slow and torturous awakening” to how Washington does business. Step by dispiriting step, he traces president-elect Clinton’s early acceptance of the conventional wisdom that deficit cutting mattered more than the economic policies he’d campaigned on, leading to a futile  scramble to salvage at least some of the budget package’s rapidly dwindling reformist components (investments in infrastructure, an energy tax) from the contending demands of the Senate, the House, and rival camps of presidential advisors. He describes how it became a crucial test of of Clinton’s presidency to pass a bill so out of whack with his original intentions that he’d already all by disavowed it to his aides. After their squeaker victory, the White House team recognizd with chagrin that they’d turned into exactly the sort of makeshift managers of business-as-usual that they’d come to town hoping to dispossess for good.

If Woodward gave a rat’s keester about the Clintonites’ abandoned goals, The Agenda would make powerful reading. But as far as he’s concerned, the point of the story is it’s happy ending, which is this pack of newcomers’ bloody-nosed acquisition of (that is, acquiescence to) insider savvy. He isn’t hand-wringingly dismayed over what happened, or even attractively sardonic: he’s approving. The book’s complacent equations of change with amateurishness, and of shrewdness with business as usual, are a little breathtaking — it’s How I Learned to Stop Worrying and Love the District.

Woodward, of course, is himself an old hand in institutional Washington — which means that, at least in some circles, his standing is rather more assured than Clinton’s is. To the permanent political population, all outsiders are parvenus even if they happen to be living in the White House. That’s why the permanent popula­tion is unconfessedly nostalgic for Bush: sure he stank as a presi­dent, but he was one of their own.

But Clinton annoys them. True, he frequently caves in to their pri­orities, with an alacrity that to us bystanders looks like unseemly haste. Yet the mere fact that he has to cave in, instead of having shared those priorities from the start, keeps him suspect. He’s also what people used to call goal-ori­ented, to the somewhat manic de­gree that, when unable to choose between conflicting goals, he pur­sues all of them at once with equal heartiness. (It never occurs to him to do nothing: quite often, he ends up with worse than nothing, be­cause he’s expended so much en­ergy to so little effect.) Yet among Washington’s permanent popula­tion, results aren’t ranked all that high — like presidents, they come and go. The imperative value is the process, which is, like them, permanent. Little offends them more than some freshly elected clown’s misperception that the process is a way they get things done, and not the thing they do.

To permanent Washington’s mind, Clinton’s presidency still doesn’t seem quite valid. In this, curiously enough, they’re at one with the Christian right, which has by now merrily embraced a conviction that the outcome of the ’92 election was fraudulent. (Not the vote, just the outcome; it’s all pretty mysterious.) The curiosity is that nothing rattles permanent Washington these days like the rise of fundamentalist populism­ — though it’s the populist part, not the ideology, that gets the insiders nervous. Yet between them, per­manent Washington’s contempt and the Christian right’s broad­sides have gone a long way toward fostering a widespread if vague public perception, of a fascinating­ly unprecedented sort, that Clin­ton is somehow less than legiti­mate — an impression Clinton himself doesn’t do much to dis­courage with his chronic tendency to act as if he thinks he’s won a game show called President for a Day.

Unlike Rush Limbaugh or even Newt Gingrich, Woodward is hardly trying to cripple a presiden­cy. (He’s already done that, right?) But like his fellow perma­nent Washingtonians, he thinks it only fitting to put Clinton in his place. In The Agenda, with nig­gling exceptions, all of the people Clinton brought to the capital with him come off badly. Every­body who was already in Washing­ ton comes off well. The atrocious Lloyd Bentsen, whose status as America’s most overrated public figure gives a fair idea of perma­nent Washington’s taste in self-­regard, is portrayed as a distin­guished and sagacious old sort even when he’s undercutting his new colleagues by making public pronouncements at odds with their strategy, as Bentsen acciden­tally-on-purpose managed to do twice during the budget fracas. Al Gore gets both kinds of treatment: he’s depicted as a numbskull when he’s being pushy about the environment and such, but viewed with new respect when he’s skill­fully carving out a niche for him­self in the White House turf wars, the latter being the kind of en­deavor that permanent Washing­ton has no trouble understanding and endorsing.

Also handled with noticeable cordiality is David Gergen — who was hired, of course, as Clinton’s desperate signal to permanent Washington that he was giving up on bypassing them. At one point, we’re urged to empathize with Gergen’s melancholy when young Clintonites tactlessly make “parti­san” — i.e., anti-Reagan — com­ments in his presence. Woodward is silent on whether Gergen’s ecu­menical sensitivities were similarly agitated by the backroom banter during his tenures in the Nixon, Ford, and Reagan White Houses­ — although it is nice to know that Gergen, who accepted Clinton’s job offer with a much-praised speech about his duty to answer his president’s call, dickered be­hind the scenes for some days to make sure he’d get a high-sound­ing title.

Last week, the White House trundled Gergen out on Face the Nation to respond to The Agenda with some welcome news. Nowa­days, said Gergen, the president was getting much better at con­trolling his temper. This was duly reported. It was also appropriate, since the book’s most damaging characterizations of Clinton’s out­bursts are written from Gergen’s perspective — “It was truly awful, on the edge of controlled violence … He had never quite seen an adult, let alone a president, in such a rage.” Presidents on the edge of controlled violence used to fire aides for such indiscretions, but Gergen leads a charmed life. He could cook Socks on a spit at the next press barbecue and the Clintons would still have to keep him on, because he’s their perma­nent-Washington status symbol­ — sort of a cross between a hostage and a trophy wife. They can only hope that when he quits, it won’t be at a juncture that will actively embarrass them.

As for The Agenda‘s descrip­tions of an administration in per­petual disarray, I’ve got no doubt that they’re accurate so far as they go. But the impression that’s conveyed of floundering bumpkinism occupies a void, because we’re giv­en no comparisons to how previ­ous White Houses handled deci­sion making. More lopsidedly, the other players in the budget-crafting process — Congress, the Republican opposition, the lobbyists, and the mucky-mucks of high finance­ — aren’t held up to the same scruti­ny. (One noteworthy exception: Bob Kerrey, who must have failed to pay Woodward due homage at a dinner party or something, since he’s depicted as an arrogant, self­-deluded prick — though just why he should be singled out on that score escapes me.) Clearly, Woodward can’t imagine any reason to view these fellow insiders critically. They may be the people who wrecked the country, but at least, unlike the Clintonites, they know their jobs. ■ 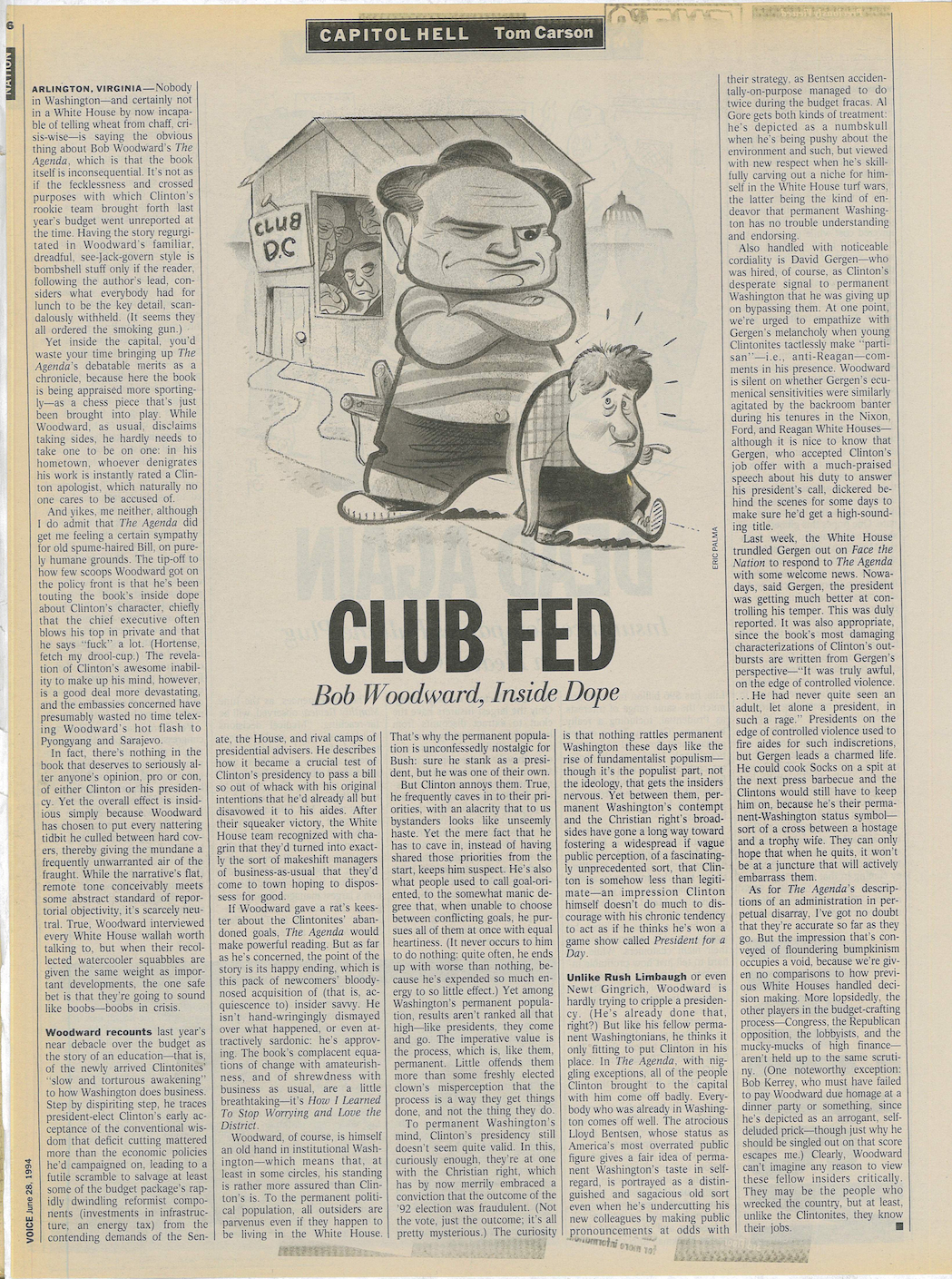