Rudy’s Record Could Be Better

RUDOLPH GIULIANI has yet to name the time and place, but he cer­tainly has made his in­tentions clear. And late last month, the wan­nabe-candidate signaled the tenor of his campaign by picking a fight with Ed Koch over race relations in New York. Giuliani charged that blacks and Hispanics had been excluded from positions of power in city government. It was as much a pitch to liberals as a punch to the gut, and Koch cried foul. “How many blacks or Hispanics did Rudy Giuliani appoint to leadership positions in the Reagan Justice Department and as U.S. attor­ney?” the mayor shot back.

So how good is Giuliani’s hiring rec­ord? A Voice investigation shows that, during his five-and-a-half year tenure, the U.S. attorney hired proportionally fewer black and Hispanic lawyers than other prosecutors. Figures made public by the U.S. attorney’s office show that, be­tween June 1983, when Giuliani was ap­pointed, and January 1989, when he re­signed, racial minorities represented 10.9 per cent of the attorneys hired. Women represented 34 per cent. Both figures compare unfavorably with hiring by Manhattan district attorney Robert Mor­genthau, Brooklyn D.A. Elizabeth Holtzman, and state attorney general Robert Abrams.

How does Giuliani account for the dis­parity? He did not return phone calls from the Voice, but several associates of­fered explanations. Unlike the other agencies surveyed, the U.S. attorney’s of­fice rarely hires lawyers fresh out of school. “Our general rule is two years of experience,” says Federico E. Virella Jr., executive assistant U.S. attorney, whose responsibilities include hiring lawyers. “Sometimes, we waive that rule,” he adds, but not because of an applicant’s race or gender. About a quarter of the law students in a summer intern program are nonwhite. “We’ve offered positions to quite a few of those people,” Virella says. “When they graduate, it’s up to them to apply after they get one or two years’ experience.”

Apparently, not many do. Of 600 appli­cants interviewed by Giuliani’s office between 1985 and the present, only 38 were ­nonwhite. Of those, 11 were retained. Why the low numbers? “To be honest, the U.S. attorney’s outreach hasn’t been as widespread as other agencies,” says Londell McMillan, northeast regional di­rector of the Black Law Students Association. “They’ve attended our job fair for the past few years, but that’s certainly not enough. We receive large amounts of mail from various legal institutions, but not from them.” McMillan says black lawyers are less likely than whites to take a job and then leave it in two years to work for the U.S. attorney. “Black law students have a difficult time making their mark. They have to start at a place where they see a future and work dili­gently to secure a permanent position.” The two-year rule at Giuliani’s office, McMillan believes, works as “a deter­rent” to minority applicants.

Still, David Denton, chief of the U.S. attorney’s criminal division, maintains that, of the minority attorneys who do apply, “it’s my impression that we hire proportionally more, and certainly a lot more than private law firms.” That’s true: While blacks make up 5 per cent of the country’s law students, they represent only about 1.4 per cent of all lawyers in the state’s 52 largest firms, according to a report in the New York Law Journal. (Hispanics represent just under 1 per cent.) The U.S. attorney’s office draws its hiring pool mostly from private firms, prompting Giuliani spokesman Dennison Young to remark that “the number of minorities hired during Giuliani’s tenure was two or three times their proportion in the available labor pool. I think when you look at those numbers, you can say that the U.S. attorney’s office was very successful.”

In addition, Young says it was Giuliani who recommended his successor, Benito Romano — the first Hispanic U.S. attor­ney in the Southern District. (Giuliani lured Romano — who, in 1987, he had ap­pointed to the number three spot — back from private practice.) But Giuliani made that move on the brink of his decision to run for mayor of New York, with its large Hispanic swing vote. The Justice Depart­ment would not say, and Young could not recall, how many minorities became U.S. attorneys while Giuliani was associate at­torney general, a position that included oversight of such appointments.

If the labor pool is so small, why have Morgenthau, Abrams, and Holtzman been able to lure more minority lawyers to their offices? On the record, Giuliani associates say their cases are more com­plex than other agencies’, requiring more experience and exposure to the practice of law. But when they retreat from the record, a blunter explanation emerges. Giuliani’s colleagues regard the U.S. attorney’s office as the city’s premier prose­cutorial agency, and they imply that, if fewer women and minority attorneys qualify for employment there, it must be because Giuliani set higher standards than other prosecutors. “I know all kinds of attorneys, regardless of race or gender, who shy away from applying to this office because of its reputation of demanding excellence,” says one Giuliani associate. “The perception might be that it’s easier to get into one of the city offices, and you know what? It probably is.”

Morgenthau, Abrams, and Holtzman have formal affirmative action programs run by specially designated officers (in keeping with state policy), but federal law does not require that of U.S. attorneys. Still, Young and Denton mention infor­mal mechanisms, including a group of minority attorneys who attend job fairs and work on outreach efforts. “Before Giuliani, you probably could have count­ed the number of minority attorneys on one hand, and still had a few fingers left over,” says Virella, who is Hispanic. But criminal court judge Patricia Williams, who served in the U.S. attorney’s office from 1977 to 1986, remembers it differ­ently. She says the real increase in wom­en and minorities occurred under Giu­liani’s predecessors, John Martin Jr. and Robert Fiske. Williams, who was the third black assistant U.S. attorney in the Southern District, and the first woman in its criminal division, sat on the office’s hiring committee. “I don’t believe Giu­liani made any effort to attract minor­ities, or even to continue the policy of attempting to increase minority applica­tions,” she says. “I did not have the per­ception that that was a priority.”

Williams has the same perception about civil rights cases initiated by Giu­liani: “His priorities were organized crime, corruption cases, and dealing with street level narcotics. I am not aware of any priority laid to civil rights.” Ronald Stroman, an aide to Congressman John Conyers, spent a good deal of time in New York City last year, investigating charges of police brutality. “In preparing for a possible hearing, we began to look at civil rights cases in the city,” Stroman says. “All the local officials and commu­nity groups we spoke to indicated that Giuliani hadn’t done anything.”

The U.S. attorney’s office has a differ­ent view. “Our marching orders by the Department of Justice are to investigate, but once the local authorities are taking action, not to prosecute,” says Harriet Goldberg, chief of the Civil Rights Unit. Goldberg maintains the office did investi­gate both the Michael Stewart and Elea­nor Bumpurs cases, and, after the police were cleared, “determined there was no reason to proceed with federal action.”

On another front, Norman Siegel of the New York Civil Liberties Union says Giu­liani’s office turned a deaf ear to com­plaints of police brutality in Tompkins Square. “One would have thought that Mr. Law-and-Order would have had his office do something affirmative in regard to civil rights violations,” Siegel says. “But they’ve done zip.” Goldberg, Giu­liani’s civil rights chief, insists her unit worked behind the scenes to get local authorities to act. “Our investigation is not yet closed,” she adds.

There are a few civil rights cases Giuliani prosecuted aggressively. His office won fair housing case against J. I. Sopher, the city’s largest rental realtor, and successfully pressed a discrimination claim against the Yonkers Police Department. But both these cases were initiated under Giuliani’s predecessor. More re­cently, Giuliani’s office won a conviction against two transit officers who had falsely arrested minority passengers. But Giuliani did not celebrate these victories with the panache with which he publi­cized his coups against crime and corrup­tion. No wonder the perception among many civil rights activists is that their issues took a back seat during Giuliani’s tenure. Civil rights are simply not part of this crimebuster’s image.

But how much could Giuliani have ac­complished against a profoundly conservative Justice Department? The answer is that, when this prosecutor chooses to, he bucks his superiors. For instance, ac­cording to Goldberg, when the Reagan administration instructed U.S. attorneys to refrain from filing class action suits against the Social Security Administra­tion, “Giuliani established a policy where we refused to represent that position.” Why didn’t Giuliani put more steam into issues of concern to minorities? Why didn’t he beef up his civil rights unit? Precisely because the Justice Department was unlikely to require him to take such actions, Giuliani’s record on civil rights and affirmative action is a fair measure of the man.

And what does the Liberal Party think about that record? Party chairman Raymond Harding told the Voice: “No comment.” ■ 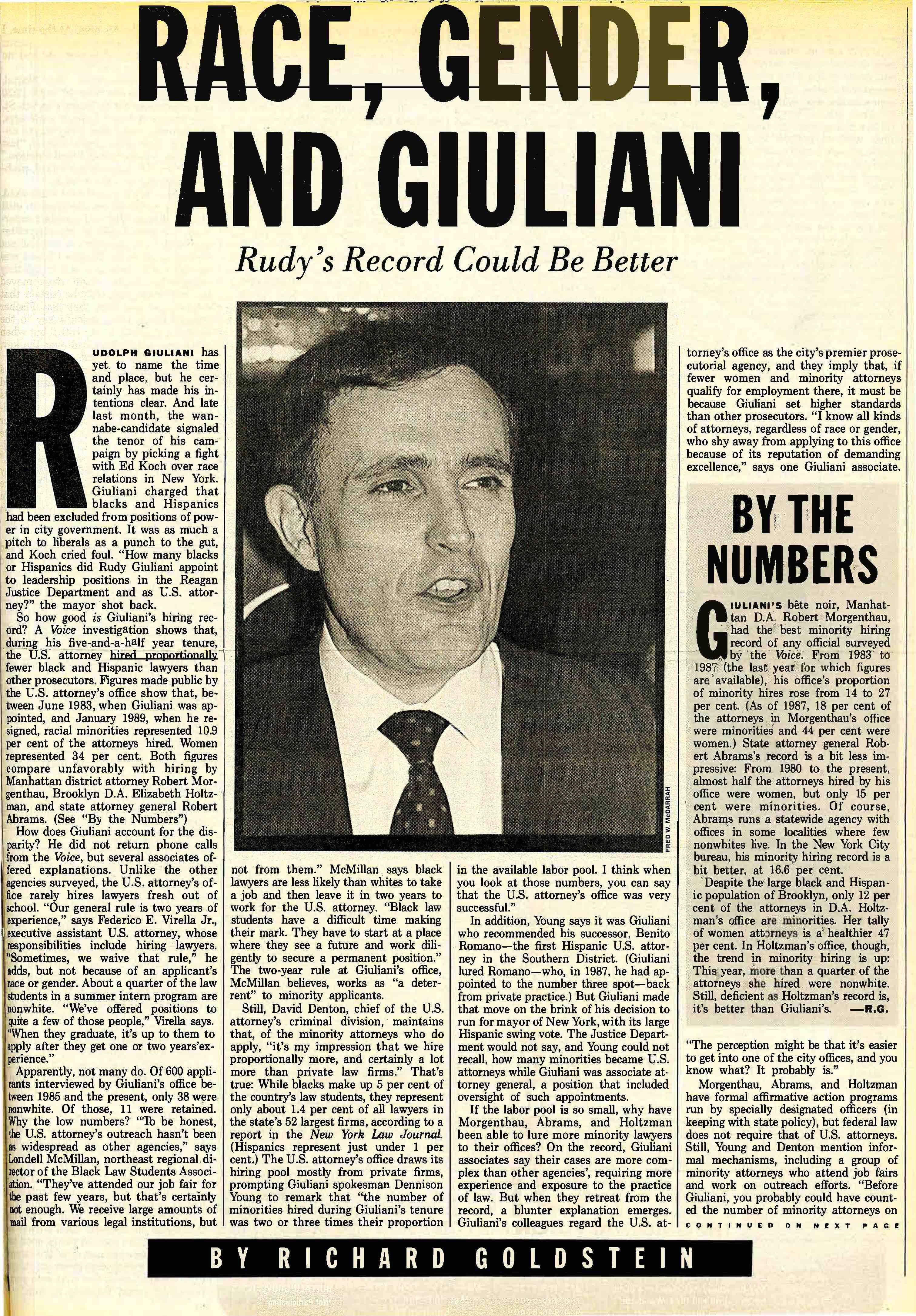 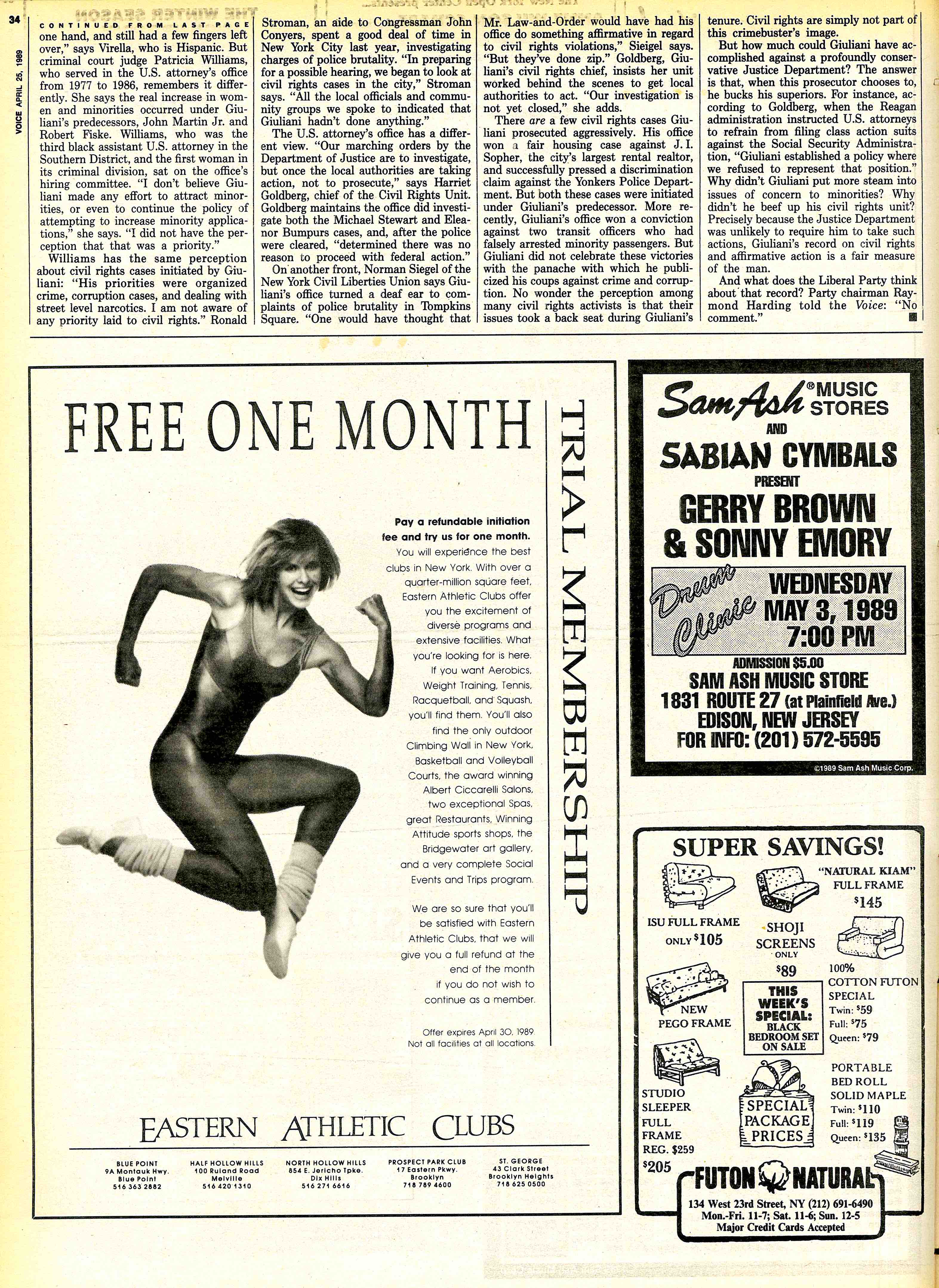