In his long career, Roy Cohn has done battle with a host of enemies, both real and ephemeral. Now in his new role as a community leader, he has galvanized his neighbors into opposing a small, drug-free program to rehabilitate youthful drug-abusers. He is charging that the Encounter program “sneaked” into its new home on his block, 68th Street between Madison and Park.

Last week, more than 200 residents from that vicinity crowded together at Automation House to vent their feelings before the local Community Planning Board. They were, for the most part, stylishly dressed but quite obviously very angry, their faces lined with the familiar hostility of people convinced that everything they have worked for is under siege.

Though the situation was commonplace, the particulars were not. The turf is one of the most elegant blocks in New York, the attacker a well-respected, nine-year-old program that will house a maximum of 50 kids in a ramshackle building previously used as a rooming house.

Cohn, whose firm is representing the opponents, maintained a low profile, speaking twice, but only briefly, his face impassive most of the time as he sat cross-legged on the floor, as a series of well-groomed and a highly articulate women paraded up to the podium to explain why Encounter would be a menace to the neighborhood. A young mother said her daughter was afraid to go out alone, a flaxen-haired “senior citizen” worried about the effect of declining property values on people with fixed incomes, and the owner of a nearby posh children’s store feared for her clientele.

As polished as it appeared, the performance was, in a sense, a useless exercise. Had the funding source for Encounter’s move been the City’s Addiction Services Agency, Community Planning Board approval would have been required. But the monies in this case came from the National Institute of Health channeled through the state’s Drug Abuse Control Commission, and neither Board nor ASA ratification was necessary.

After the opposition had made its presentation, the meeting was interrupted by a man who shouted, “Maybe the community is divided. I want to hear from us people who believe in something besides property values.” If the residents are divided, it wasn’t apparent that night. Nearly everyone who spoke in favor of Encounter was either connected to the program, to other social agencies, or to the Family Court, a primary source of referrals. The most eloquent of these was Justine Polier, a lifetime Upper East Sider and Family Court judge for 37 years. “I was concerned tonight,” she said, “as I listened to a great number of people who I think are far better than they sounded … This fear has been spread and has caused you to blind yourselves to the needs of other human beings while you yourselves are privileged.”

Some of the questioners charged that Encounter teenagers use obscene language, but if obscenities truly bother Encounter’s new neighbors, one wonders how they will react to the news that last summer Audubon Films shot part of an erotic movie at 39 East 68th Street, the building in which Cohn lives and works. Audubon publicist Sheldon Roskin of Solter, Sabinson, and Roskin at first confirmed this information and told The Voice that the as yet unreleased film is based on a French never entitled “L’Image.” After conferring with director Radley Metzger, Roskin denied his previous statements, but further corroboration was provided by three crew members — lightning man Joe Rivers described the film as a “hoopy-scoop,” or very low-budget operation, and he and production manager Don Newman said that a small room at the rear of the ground floor was transformed into a dressing cubicle of a lingerie shop as a setting for a lesbian sex scene. Both maintained that more shooting, which  they did not witness, was going on elsewhere in the house. Although Cohn and his law partners occupy most of the building, he says they are merely tenants — and not even stockholders — of the building, which is owned by the 39 East 68th Street Corporation. He insisted he knew nothing about the filming.

By the end of last week, Encounter and its opponents were locked in a legal skirmish resulting from the serving of a temporary restraining order. The plaintiffs are seeking to bar the program permanently and are asking the court to hold Encounter in contempt for violating the order Encounter is contesting the validity of the order. In its most recent ruling, the court permitted Encounter’s present 19 residents to stay in the building as long as they don’t interfere with the “quiet enjoyment” of the remaining tenants.

Meanwhile, two of the original plaintiffs, Laura Margolies and Lynne Clendenin, have withdrawn their names from the case. “I’m getting close to these kids,” explains Clendenin, “and I can’t have them in my room, play records, and watch tv with them while my name’s on an injunction. That’s very hypocritical. We just want to remain neutral.” ❖

This article from the Village Voice Archive was posted on September 10, 2020 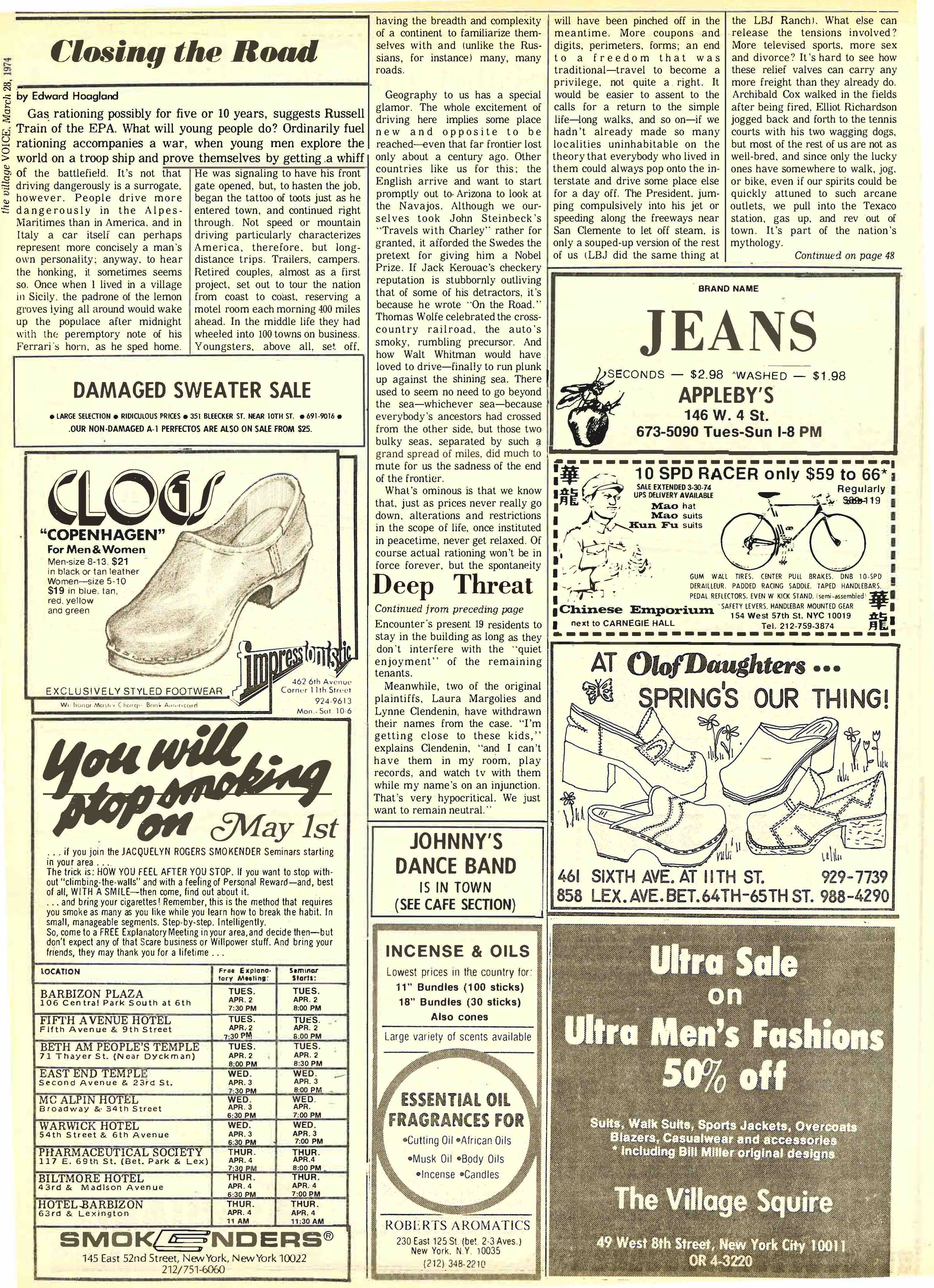