In recent years, more people have asked me about my trombone solo on Frank Sinatra’s “I’ve Got You Under My Skin” than just about anything else I did in music, which is gratifying because for many years no one knew who played it. One writer even credited it to Juan Tizol. The performance is, in a way, derived from a record that Bill Russo wrote for Stan Kenton, “23 Degrees North, 82 Degrees West,” a refer­ence to the longitudinal location of Havana, Cuba, that had a montuno section for trombone. Actually, that record was in turn indebted to Dizzy Gillespie’s “Cubana Be/Cubana Bop,” which Gillespie wrote with George Russell. That was the first instance of a mon­tuno in big band jazz. But then Russo wrote his piece — not a copy, but a piece with that flavor, done very well, with a very good Frank Rosolino trombone solo. It’s one of Stan’s best records really.

Now in retrospect, I don’t think the approach to the song was Nelson Riddle’s idea. We’re talking 40 years after the fact, but it occurred to me much much later that “I’ve Got You Under My Skin,” a Frank Sinatra recording that went into a Latin type of a thing in the middle, with the trombones — first bass trombone, then another trombone — was in this tradition that began with Dizzy and was adapted in a fresh way for Kenton. And it was one of Sinatra’s first really important Capitol dates — there were other dates earlier, but this one took him to a whole differ­ent level. And, remember, it’s Capitol Records and Kenton was one of its biggest stars. So it occurred to me all these years later that the A&R people at Capitol were better acquainted with Kenton and his recent suc­cesses than they were with Frank Sinatra, who had returned from a floundering ca­reer only a few years before. And in plot­ting that particular number somebody, not Frank, suggested this approach. He prob­ably wasn’t too crazy about the idea, be­cause Nelson wrote it at the last minute and it wasn’t released as a single, only as part of the album, Songs for Swingin’ Lovers, which was drawn from about three record dates.

I’d been on dates with Sinatra before. His first arranger at Capitol was supposed to be Billy May, but Billy had a band that went out on the road, and the dates were set and they couldn’t get Billy back, or he wasn’t available, or couldn’t be found — I don’t recall which. In order to do the dates, they brought in Nelson Riddle and that was Nelson’s first exposure to Sinatra, on­ly he didn’t get label credit — Billy May did on the singles “I’ve Got the World on a String” and “South of the Border.” Nobody at the time knew that Nelson had writ­ten them, because although he led the band, word got around that these were Billy’s charts and Nelson was sworn to secrecy. Later they were obliged to give him his chance, and by the time we did Songs for Swingin’ Lovers, everyone could see Sinatra and Riddle were a great team.

So for the “I’ve Got You Under My Skin” session, I walked in early. I always got to a record date well ahead to see what was coming so that I could get nice and nervous. Some peo­ple would say you’re out of your mind, but I just felt it was wiser. I’d relax a little more as time passed, but then I’d find myself at a session, turn page and see something very hard and, without any practice, it’s time to start playing it. The public doesn’t realize that the band gets there and within minutes will be recording the music for posterity. That’s the way it always happens. The on­ly time it didn’t happen that way was when you had bands on the road, Ellington, Glenn Miller, the swing bands; then the music was known because they had months on the job, at dances, to try things. But the way it’s done to this day is the studio play­ers walk in to do a movie and they will do that score before lunchtime. They have to be that good. Few people realize what that takes — they think they had a week to re­hearse and take it home.

Anyway, I arrive early and I see that the whole song is in G-flat, six flats, which wouldn’t bother the singer, but for an instru­mentalist it isn’t easy to come up with something graceful where there’s nothing written, just chord symbols and fills of some­thing in G-flat. So I’m looking at these symbols — ­just little chicken tracks with the name of the chord, G-flat. And I didn’t even realize until much much later that that part, that section was the bridge of the song, the part that goes, “I’d sacrifice any­thing, come what may, for the sake of having you near.” If I had even begun to know that; I would have had something planned, something related to the melody, who knows what. But I just didn’t know. And it does stay on one chord for quite a while anyway-the melody con­tinues in the same change. So we start and I kind of plotted out something that fit. I figured I was going to play it.

Well, until recently I didn’t know how many takes we made. I had lost track of the number, there were that many. But a young­ster called me a couple of weeks ago, a young man who is writing a discography on Sinatra and he called me for anecdotes. I told him I just remembered playing take af­ter take, and that I left the best stuff I ever played in the first half a dozen takes, when I was still fresh — I’m telling you, the fiddle players were applauding me at that point. And this youngster reminded me there were 22 takes! I had really kind of written it off, because pretty soon it wasn’t a matter of re­ally making history, but of getting through it, you’re so tired, Twenty-two. I think it was about the third number in the session, and I was also given all the lead parts to play. The other players in the trombone section really couldn’t have anyway, cause it was George Roberts on bass trombone; and Juan Tirol, which was a thrill for me because I’m an Ellington nut and there’s Juan Tirol sitting next to me, but Juan was not really a lead trombone player; and Jimmy Priddy, who was also a copyist for Nelson Riddle and had played lead with Glenn Miller. But these charts were not his bag, so he wasn’t going to play it; he would have walked out of the studio. It was up to me. And I’m a hero in those days, right? — still fresh from Kenton, still had road chops. Well, that passed quickly enough. Five years later, I didn’t have those chops — there is no way you can be a studio player and keep that kind of lip or endurance. It went and it went fast. Rarely did I get calls to play that way. The typical work I was doing was cues for television shows, where a very moderate level of excellence is re­quired, once in a blue moon something hard. And then I began to wor­ry about what I’d do if I had to play something re­ally challenging after 10 years of studio work.

That fear got to a lot of players, especially trumpet players, who then began to drink or worse. It’s the fear of being caught doing some­: thing you really can’t do anymore. On the road every night, you’re play­ing hard — it’s second na­ture. Studio work, sometimes you work five days and nights in a row and then nothing happens for five days or more. Of course, you made a lot of money. I was here at a very busy time. And it was good for young jazz players because Shorty Rogers helped to break the doors down. Shorty got a couple of pictures out of the clear blue sky. But before that nobody who played jazz was considered able to walk in and do a studio call. They were convinced you couldn’t read, or you wouldn’t show up, or you’d fall down drunk. In that sense, we were all trailblazers. So somehow I got through that solo, and now 40 years later people still want to talk about it. Incredible! ❖ 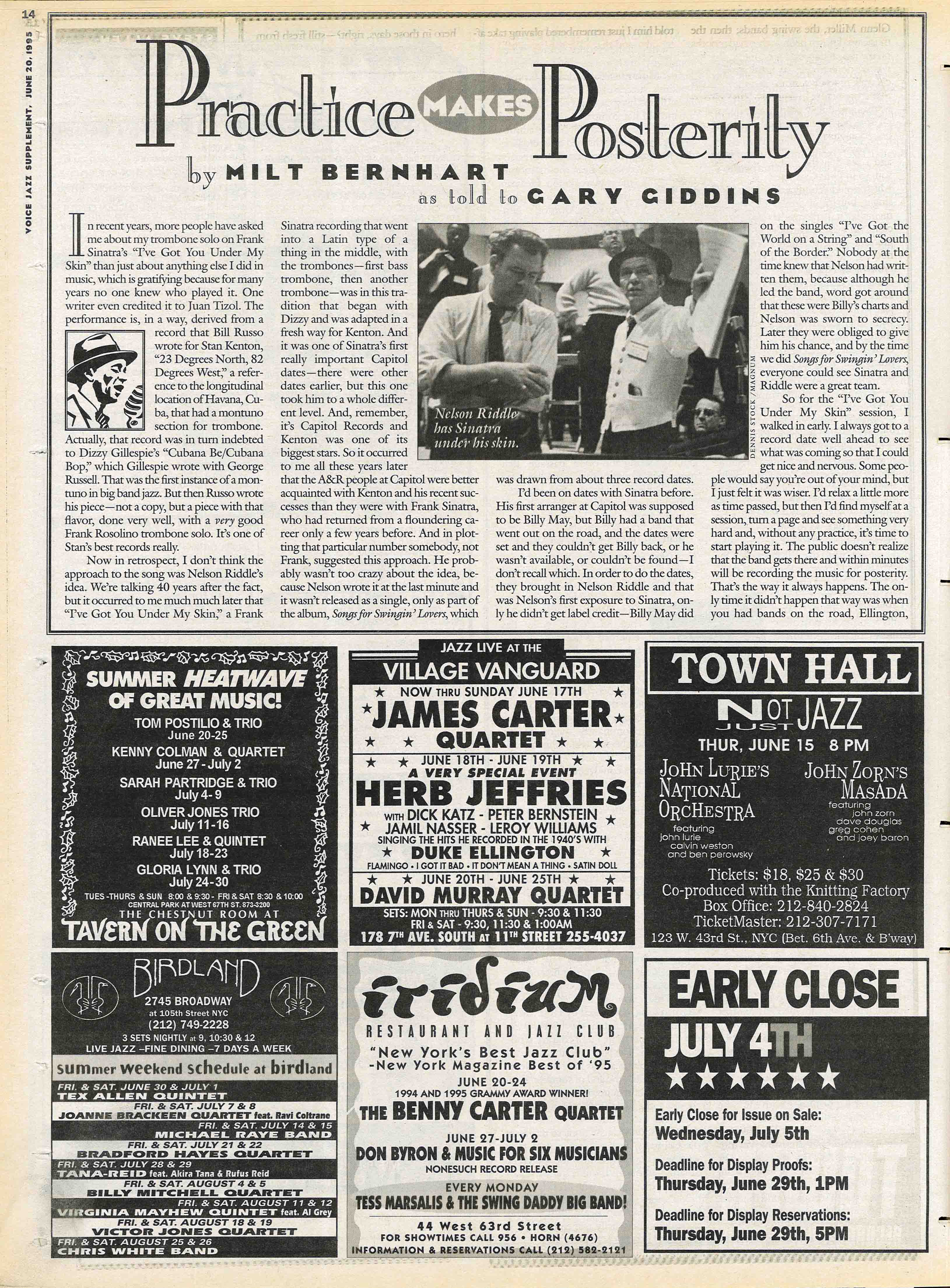 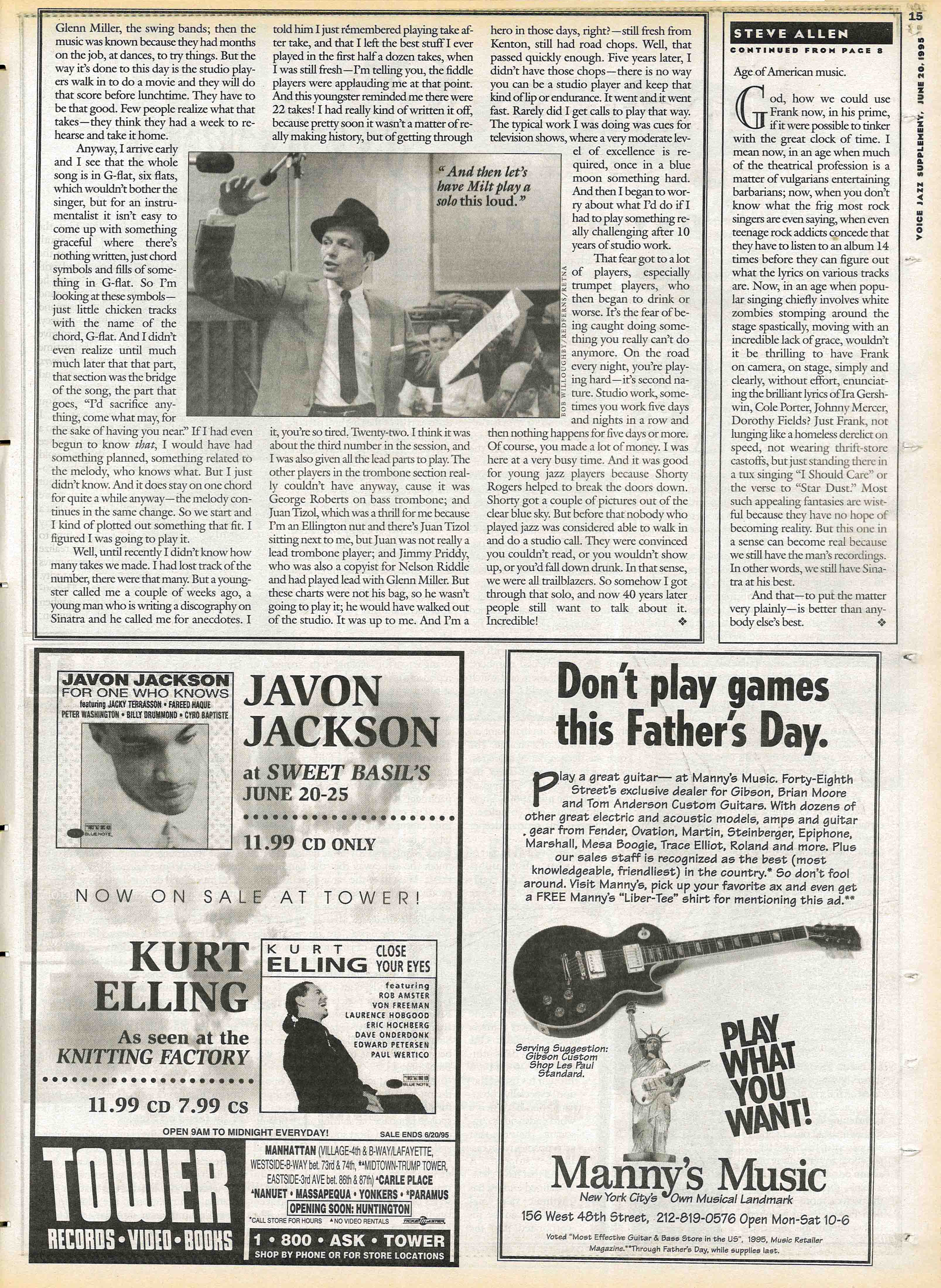