Add to the ever growing number of 12-step programs Accompa­nists Anonymous. AA, a semi­-fictional organization founded by some of New York’s finest jazz musicians, is dedi­cated to helping instrumentalists avoid the frustrations of accompanying singers. Many jazz musicians don’t like singers, and some will go to great lengths to avoid play­ing for them. Not without rea­son. Most singers haven’t taken the time to develop the skills required to communicate musical ideas, especially within the frame­ work of jazz. Frank Sinatra is a rare excep­tion. If you asked him, he probably wouldn’t refer to himself as a jazz musician, yet many jazz musicians credit him with having made tremendous contributions to this art form. His artistry encompasses much of what jazz musicians strive for.

Sinatra’s mastery lies in his ability to communicate the true meaning of a song in its complete form, the music and lyrics simultaneously, without sacrificing the im­portance of one for the other. His vocal quality, intonation, diction, phrasing, and sense of swing are integrated and balanced in a way that has brought us unequaled per­formances of American popular songs.

Some of Sinatra’s most memorable recorded performances were made in the late 1950s and 1960s, a period during which he released recordings first for Capi­tol Records and later his own label, Reprise Records. By this time in his career he had cultivated and refined the skills that created the sound and style that defined him from the beginning.

Frank’s earliest recordings for Victor and Columbia are certainly pleasant. He always sang in tune and with a beautiful sound. But in those early years, Sinatra was in many ways underde­veloped. He definite­ly lacked the swing feel that would later become one of his trademarks. And in the early 1940s recordings with Tommy Dorsey, discerning listeners will notice how long he sus­tained notes and how much vibrato he used. Frequently, singers become overly fo­cused on the sound of their own voices. They seem to be listening to themselves singing instead of focusing on delivery of the music (cf., just about any Broadway cast album or cabaret record). As a result, they tend to make themselves more important than the song. Frank wasn’t en­tirely guilty of this. But occasionally, on his early records, one detects an unmistakable self-consciousness in the way he projects his voice. He was much more of a “crooner” in those days, at times even corny. But the feeling generated by the Dorsey rhythm section and the style of those orchestrations required him to ap­proach the vocal line as he did. And so even in these early record­ings we hear evidence of one of Sinatra’s most important attribut­es: He always maintains a strong musical relationship with his ac­companiment.

The time spent with the Tommy Dorsey band allowed Sinatra to obtain and refine much of the technical and musical material that would later be part of his style and repertoire. (His later vocal per­formances are saturated with big band swing rhythms and jazz articulation and phrasing.) That kind of information can on­ly be acquired by observing instrumental­ists. Saxophonist Jerry Dodgion, who played with Sinatra in 1959 and 1960 dur­ing his tour with Red Norvo, recalls: ”Frank used to always tell us that he learned a lot while he was on the Dorsey band. Es­pecially about breathing. In those days the singers always sat up on the stage with the band during the instrumental numbers. Frank said he used to sit there and watch the way Dorsey’s back would fill up with air between phrases.”

In 1957 Sinatra released A Swingin’ Affair for Capitol, and from that point on listeners become aware of a change. The voice was deeper, richer, more resonant. He had become direct, us­ing less vibrato, not “singing” as much. By the mid 1960s, a new Frank Sinatra had completely emerged, his groove deeper than ever!

That groove is a big part of what distinguishes Sinatra from every­one else. At some point between the late ’50s and early ’60s, he realized that for vocalists the key to swinging lies more in where you stop the note than in where you start it. This bit of informa­tion is something many other singers simply haven’t learned. One way Sinatra discontin­ues the sound is through his use of dic­tion, especially conso­nant sounds. When a word ends with a con­sonant, the note that accompanies it can eas­ily be stopped. A sound that has a clear­ly defined ending has rhythmic value and therefore can be in­corporated into the groove of a song. In Sinatra’s case, this is usually a swing feel.

Critics can object all they want to Frank replacing a the with a that in the lyric of a song. But those mannerisms can’t always be dismissed as tough guy stuff. Frank knows that a word with a defined stop, like that, swings more than a word that hangs in the air, like the. It func­tions as part of the rhythm, part of the swing groove. Many singers don’t swing because they sustain notes so long that they sabotage the rhythmic relationship between the vocal line and the music’s pulse. They don’t partake in the primary ingredient in music: rhythm.

Listen to “A Foggy Day,” from the 1961 Reprise album Ring-A-­Ding-Ding. The accompaniment in the first chorus is played in a broken­-two feeling by the rhythm section. Sinatra sings fluidly with a legato approach, and his voice is cush­ioned by the strings and saxo­phones, playing sustained notes. In the second chorus, the groove changes to a four feeling, as the strings are replaced with brass and long notes are sub­stituted with shorter ones. Accordingly, Frank shortens his notes and adjusts his rhythmic placement, fully participating in the newly established swinging groove. The rhythms he chooses are generally tra­ditional big band swing figures, and they are always calculatedly and confidently po­sitioned within the structure of the accompaniment.

The swing of Frank Sinatra is beauti­fully captured on the Reprise recordings where he’s featured with Count Basie’s band. Frank sings rhythmic figures in very much the same way that the band plays them. They have the same time-feel and produce a powerful sensation of swing. For that reason the Sinatra-Basie sessions, es­pecially It Might as Well Be Swing and Sinatra at the Sands, are among the fa­vorite recordings of jazz musicians. Saxo­phonist Bob Berg, known for his work with Chick Corea and Miles Davis as well as his own bands, is an avid fan: “To me, Frank Sinatra is the perfect singer, the Rolls­-Royce of singers. And you know, it’s really amazing how many jazz musicians love Sinatra. Miles really liked Frank. I remem­ber him telling me to check out the way Frank phrases.”

Without question, phrasing is one of the most challenging aspects of vocal per­formance. We all phrase when we speak — ­spoken language has starting and stopping points, long and short sounds, antecedents and consequences, inflection, cadences, and natural places to breathe. These compo­nents also exist in music. Songs are con­structed by combining musical language (a series of organized sounds) with spoken language (a series of organized words). The key to Sinatra’s masterful phrasing is that he has a command of both languages and can speak them simultaneously. (No easy task, and one that can get especially com­plicated when the words and music were not written at the same time or suggest contrary intentions.) The truth is very few people can really do it. But Sinatra does it effortlessly, and with tremendous regard for the intentions of the composer and lyricist.

Sinatra’s bilingual abilities are exquis­itely demonstrated on the 1963 Reprise re­lease, The Concert Sinatra, a collection of eight beautifully performed compositions flawlessly orchestrated by Nelson Riddle. These recordings exemplify Sinatra’s mas­tery of the delicate balance between words and music, and demonstrate how, perhaps more than any other singer, he understands the ways they connect. The bulk of his recorded work is a catalogue of unsur­passed renditions of songs. His innate tal­ent and his cultivated skills are worthy of the highest admiration. His performances have educated generations of musicians, es­pecially jazz musicians. At a Carnegie Hall concert in the early 1980s, Micky Weisman, who was part of Sinatra’s management team, ran into Miles Davis in the cafe, and they had a conversation that confirmed Bob Berg’s recollection. “He was there with Cicely Tyson. We spoke for a while and I remember he told me, in that raspy voice of his, that he got a lot of his phrasing from listening to Frank’s records. He said he learned a lot from Sinatra.”

For most musicians, nothing more need be said. In music, as in any art form, the exchange of ideas is fundamental. And though it hasn’t always been acknowledged or understood, Sinatra has made a sub­stantial contribution to the education of countless musicians. If Miles could learn from him, we all can. ❖ 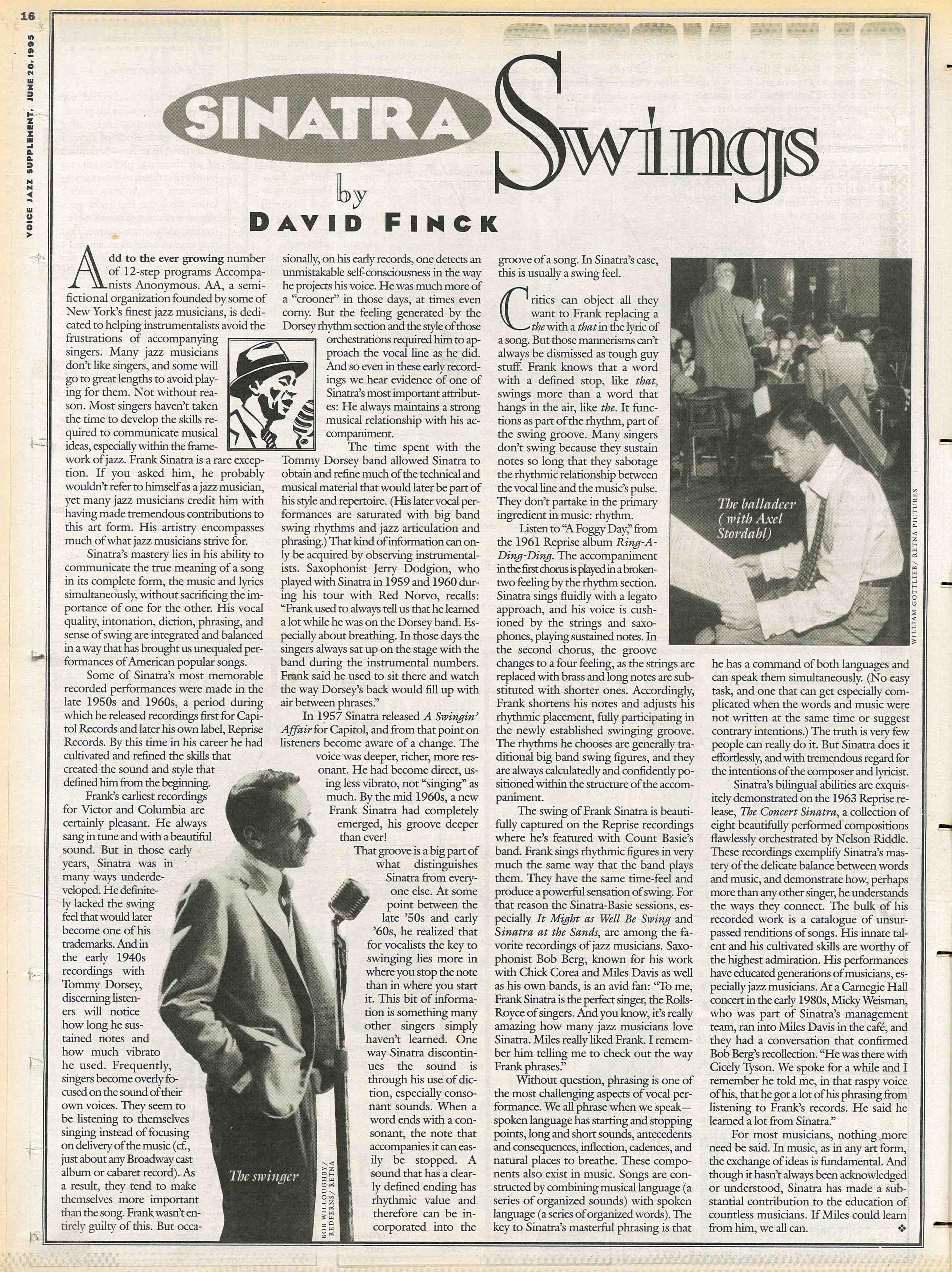