As an ex-CIA officer who has twice battled the CIA all the way to the Supreme Court, I’ve learned some bitter lessons about how accountability does and doesn’t work in the national security community. But nothing I’ve learned quite prepared me for President Bush’s recent decision to par­don six Iran-contra figures. The action sends the worst possible signal to spy-bu­reaucrats, even as Congress and the courts work overtime to pamper them. It is not an auspicious coincidence.

Admittedly, none of Bush’s parolees es­capes unscathed; you don’t need a pardon if you’re guiltless. Still, the six former Rea­gan-Bush officials who benefited from his Christmas Eve proclamation clearing them of all Iran-contra charges are sure to claim exoneration, thus tempting others to believe they too can skirt the law and get away with it.

Bush seemed oblivious of this danger when he expressed hope in his statement that this would put Iran-contra behind us. Indeed, his very rationale for clemency invites further mischief. To judge from what he said, any hint of lawlessness can be redeemed if undertaken unselfishly for patriotic reasons. It’s an argument that would have warmed Nazi hearts at Nuremberg.

HOLDING FEET TO THE FIRE

Though accountability remains, of course, the essence of American law, the Iran-contra prosecutions were never about this, at least not in any pure form. Because Con­gress immunized so many witnesses during its 1987 investigations, independent coun­sel Lawrence Walsh was never able to find enough “clean” evidence to prosecute the principal crimes, including violations of export law and congressional restrictions on contra aid. Even the lying and cover-up charges he pursued instead were bowdler­ized in court, leading to convictions for lesser crimes like “withholding information from Congress.”

Not that the offenses obscured by such shorthand or forgiven by Bush’s pen stroke were ever marginal. Robert McFarlane, while Reagan’s national security adviser in 1985, helped draft letters to Congress whitewashing Oliver North’s contra activi­ties. CIA officials Clair George, Alan Fiers, and Dewey Clarridge diddled Congress about their own Iran-contra roles, and for­mer assistant secretary of state Elliott Abrams lied about what he knew and didn’t.

Worst of all, Bush’s most prominent pa­rolee, former defense secretary Caspar Weinberger, denied under oath the exis­tence of 1700 diary notes, including one that seemingly implicates Bush in crucial Iran-contra decision making. Bush and other Republican fans have sought to trivialize Weinberger’s wrongdoing by citing his many years of public service. Will they of­fer the same apologia for Clark Clifford, the Democratic elder statesman who has been charged in the BCCI affair? Don’t count on it.

One of the most pernicious aspects of the pardons, in fact, is their aura of selective justice. Pity Richard Secord and Albert Ha­kim, North’s cohorts in crime who received not an honorable mention from Bush. Simi­larly shortchanged were many lesser vic­tims of the cover-up he now forgives. Few of us, for instance, have heard of Arif Dur­rani, a convicted gunrunner who argued throughout his 1987 trial and five-year pris­on term that the White House had been moving arms to Iran at the very moment he was accused of doing so. The government denied his claims, and denied any evidence to support them, and thus cinched his con­viction. Had Weinberger, McFarlane, or any of Bush’s other favorites come clean during Durrani’s trial and appeals, he might have walked.

And what of Jack Terrell, a self-styled mercenary who was hounded through the courts on neutrality violation charges for helping contras? The case against him was ultimately thrown out, but exoneration would have come faster if the evasions ex­cused by Bush had not been so effective. In his pardon statement Bush cast his beneficiaries as selfless souls who had sought no profit from their actions. But in fact, by staying mum to avoid justice, they profited quite nicely even as others paid dearly for the same misdeeds. There is scarcely any integrity in that.

In his pardon statement Bush cast his beneficiaries as selfless souls who had sought no profit from their actions. But in fact, by staying mum to avoid justice, they profited quite nicely even as others paid dearly for the same misdeeds. There is scarcely any integrity in that.

What makes the pardons most troubling, though, is the larger pattern they sanctify. Iran-contra was never merely an attempt to duck inconvenient legal restrictions on arms exports and contra aid; conceptually it was an elbowing aside of the very princi­ples of shared power and accountability en­shrined in the Constitution and reinforced through Congress’s investigations of the CIA in the mid ’70s.

Oliver North’s spiritual godfather, the late CIA director William Casey, deplored those investigations and the strictures born of them, in particular the injunction to share secrets, and hence power, with Con­gress. So it was that he and other Reagan­ites farmed out their most sensitive dirty work to private operatives, the Pentagon, and the National Security Council, all of them beyond the scrutiny of Congress. The subsequent excesses of Iran-contra were merely the offspring of this imperial dodge. In granting clemency to the half-dozen surviving ringleaders, Bush cannot help but embolden like-minded loyalists everywhere in Washington.

This is not to say that he or other Reaganites are solely responsible for the loosening of Congress’s grip on the intelligence establishment. Congress itself has con­spired in the process. When the first com­prehensive intelligence oversight bill was passed in 1980, legislators included a loophole allowing the president to withhold the most sensitive operations from the full oversight committees. The president also was permitted to postpone disclosure of lesser activities as long as he “found” in writing that they were vital. Reagan turned this exemption into a license for excess, even writing a post-facto “finding” to give a patina of legality to the CIA’s first arms delivery to Iran.

Once this and other transgressions were discovered, Congress did little to recoup. In drafting a new oversight bill over a year ago legislators ruled out post-facto “findings” like Reagan’s, but agreed to let the presi­dent go on avoiding timely consultation with watchdog committees. Even more as­tonishingly, they formally approved use of oversight-proof private operatives or for­eign allies in intelligence operations.

Later, at the nomination hearings of CIA director-designate Robert Gates, the intelli­gence panels passed up a second chance to home in on Iran-contra. They seem no more inclined to open that door now. A House Judiciary subcommittee is mum­bling about holding hearings on the par­dons, but the incoming chief of the Senate intelligence panel, Democrat Dennis De­Concini, has urged leaving well enough alone. Ditto House Speaker Tom Foley, who rumor has it helped hasten the pardons by promising not to oppose them publicly. If this is the dawn of a new era in congressional assertiveness, there’s not much light on the horizon.

Even more distressing is the growing pas­sivity of the only other force for account­ability in national security disputes, the federal judiciary. Long ago Gerald Ford tried to bring the courts actively into intel­ligence oversight. In 1976 he canceled a 22-year “gentleman’s agreement” between the CIA and the Justice Department that had allowed the agency to decide whether a crime committed by a U.S. intelligence offi­cer would be prosecuted.

More recently the independent prosecu­tor act took such decisions out of the hands of often politicized attorneys general. But in practice the law often played out like a latter-day gentleman’s agreement. While al­lowing the independent counsel to pursue cases on his own, for instance, it left the attorney general and the spooks free to determine which official secrets could be released for trial.

The Reagan administration used this es­cape hatch to deny evidence needed in the trial of Oliver North. As a result, Walsh was forced to drop charges arising out of the diversion of Iran arms profits to the con­tras. Never again did his prosecutions re­turn to his key issue. One CIA operative, Joe Fernandez, even had the case against him dropped because of the agency’s refus­al to release intelligence to his lawyers. So much for the principle of equal justice un­der law.

Had federal judges themselves been less taken with national security claims in re­cent years, such developments would be less troubling. But often, in intelligence matters, the judiciary has been more catho­lic than the pope. In 1980 I had the dubious distinction of provoking a U.S. Supreme Court decision that helped accelerate this trend.

The case, brought by liberal Carterites, many of whom are now heading back to Washington, was designed to punish me for publishing a book without CIA clearance and censorship. But the larger issue was whether in the absence of express congres­sional authorization (a law) the president can wield broad powers (like censorship) that cut into constitutional rights. The Su­preme Court pronounced a resounding yes, thus buttressing an expansionist interpreta­tion of presidential power that some ex­perts believe led to Iran-contra.

At the same time, the court made clear in its ruling that the work of the intelligence community is too complex and important to be second-guessed. For any workaday federal judge, that’s a chastening thought, and sure enough, few federal magistrates have been willing in recent years to challenge the CIA on any intelligence issue. In simple Freedom of Information cases, the tide has run consistently against disclosure because judges refuse to question CIA ex­perts who warn against it. In the Noriega case (where I was an investigator for the defense), the judge chose repeatedly not to inconvenience the CIA with ticklish evidentiary demands.

Even when I went back to court four years ago to seek redress for a costly censorship abuse by the CIA, I got no sympathy. The trial judge declared portentously that the agency is too busy to be held to strict clearance deadlines, and the Supreme Court refused to intervene, thus proving again that there is little legal comfort for anyone trying to bring the intelligence community to heel.

Some would say that this judgment is too harsh. But against the backdrop of the Bush pardons and Congress’s continued coddling of the spooks, any distortion of judicial impartiality in the same arena merits con­cern. If our lawmakers and law-enforcers won’t keep the scales balanced, who will?

How comforting it would be to conclude that the incoming Clinton team promises to remedy things. The president-elect himself did object to Bush’s apparent willingness to elevate certain individuals above the law. Still, Clinton’s candidate for defense secre­tary, Les Aspin, a man who earlier worried about presidential excesses, reportedly fa­vored the pardons. Is there something about being invited into Washington’s most privileged circle that makes even reason­able souls quiver with imperial zeal? If so, Iran-contra is not some piece of medieval history, but a metaphor for an inevitable way of doing business in Washington. ■ 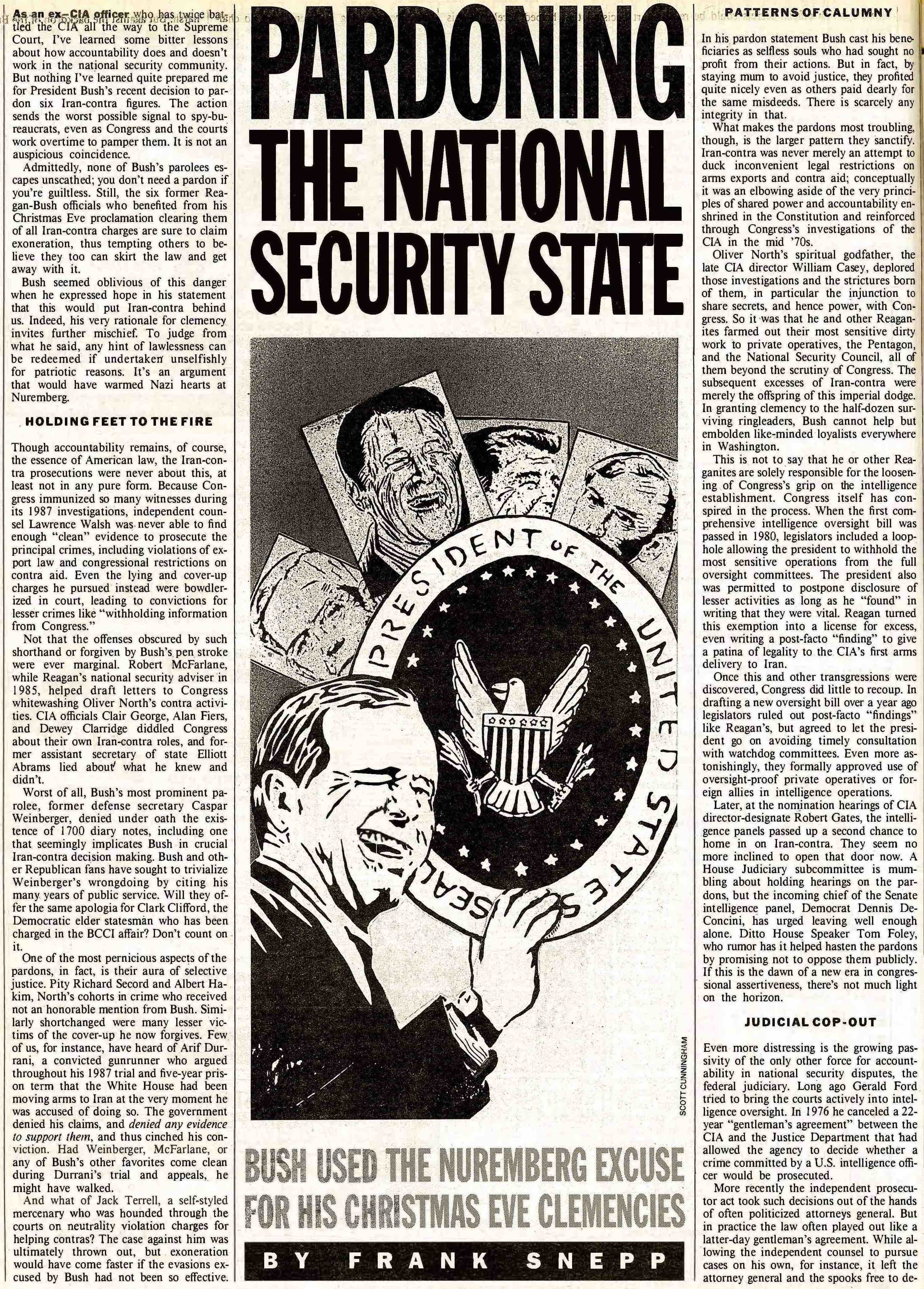 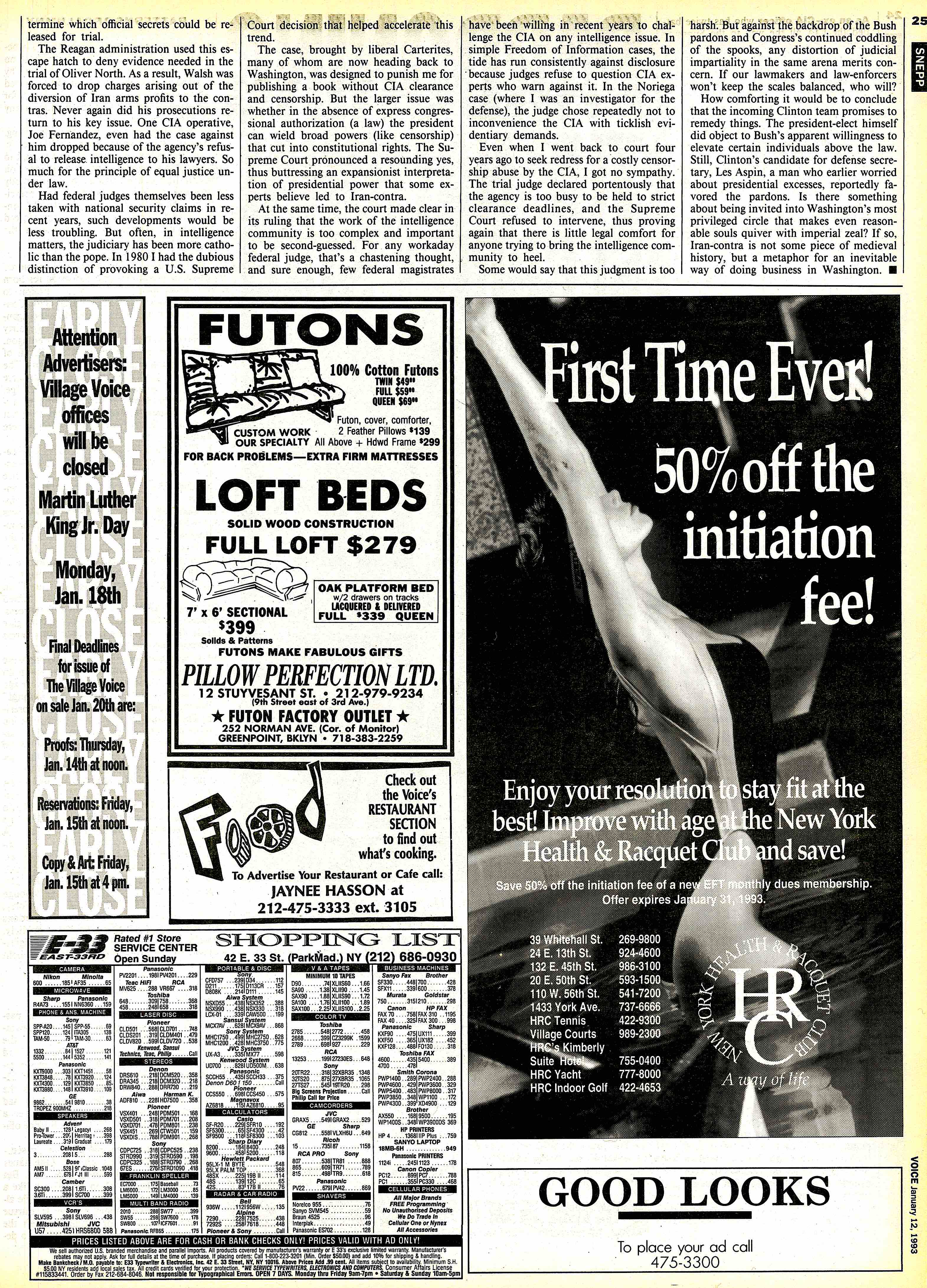