On the frontier of every art form guerilla bands of prophets and crackpots are nourishing the orthodoxies and fashions of tomorrow.

A decade ago the frontier outlaws were men like Miles Davis, Paul Goodman, and Norman Mailer. Bereft of followers, holed up in private Sierra Maestras, they scrounged for economic survival. Today every branch of culture has its own tribe of far-out revolutionaries, pushing imagination to new limits of possibility. There are William Burroughs, Jack Gelber, Lenny Bruce, LeRoi Jones, John Coltrane, and Jonas Mekas. And they are no longer struggling merely for survival: they represent the organized revolt of one generation against the limitations of the preceding one.

Folk music is one of the battlegrounds where the hegemony of the established canons and values is being challenged by a creative cadre of insurgents, all city intellectuals and almost all in their early or mid 20s, who write and sing topical songs characterized by radicalism, wit, immediacy, and poetry.

Their leader up to until now has been the mumbling, ragamuffin genius Bob Dylan, as much the symbol of this generation as James Dean was of his. Dean was a rebel without a cause, but Dylan has been the rebel of a dozen causes.

Then there’s Buffy Sainte-Marie, who writes of her fellow Indians and their brutalization; or Phil Ochs, one of whose songs was inspired by a Louis Aragon poem; Gil Turner, the ideologue of the topical movement; Tom Paxton, who wrote his most famous song between sets in that cavernous crucible, the Gaslight; Len Chandler, who has a M.A. from Columbia but who is broke because, instead of staying in the coffee house circuit, he spent last summer working free for SNCC; Billy Edd Wheeler, chronicler in song of the stricken coal country; and at least a dozen more who carry the seed of Woody Guthrie and Leadbelly.

The songs they write are not just traditional protests against war, poverty, and injustice, though even on those themes they are less mawkish and more corrosive than many of the songs of the ’30’s. Some of the songs are intensely personal statements like Buffy Sainte-Marie’s hypnotic warning against codeine addiction. Others glow with sardonic wit like Paxton’s “Daily News.” Others muse on the meaning of tragedy like Och’s “The Thresher” or Dylan’s “Who Killed Davey Moore?” Still others take a try at levels of meaning and Brechtian overtone, like Chandler’s “Roll, Turn, Spin.” Others come out of the jails and churches of the South, given shape by both white and Negro song writers, like “Ain’t Gonna Let Segregation Turn Us Around” and “If You Miss Me at the Back of the Bus.” And finally, there are songs like Dylan’s “Hard Rain,” a surrealist, post-Bomb view of the world, with such images as “a black branch with blood that kept dripping,” and “I saw ten thousand talkers whose tongues were all broken.”

Most afficionados mark the birth of the topical song movement with the publication in February, 1962 in New York of the magazine Broadside (though the seeds of the movement go far back into the ’50s), put together by Pete Seeger, the selfless patron of the movement, Sis Cunningham, its chronicler, and Gil Turner, its talent scout. The first issue contained five songs, including “Talking John Birch Blues” by a 20-year-old named Bob Dylan. Fifty-five issues and 500 songs later, Broadside is the mimeographed bible of the topical song apostles and their disciples, stretching from the redwood forests to the Gulf Stream waters.

And after those three years the new-wave song writers are on the verge of dominating folk music. While threadbare tunes like “If I Had a Hammer” or “Michael, Row the Boat Ashore” are now the property of the most commercial folk-singers and the most imaginative rock ‘n’ rollers, the repertoire of the most popular folk-singers — Seeger, Joan Baez, Judy Collins, or Peter, Paul, and Mary — is based on topical songs that a decade ago would have been blacklisted by every record company and radio station in the land. Even nightclub performers like Lena Horne and Bobby Darin have begun to incorporate topical songs into their acts.

In spite or their growing popu­larity and influence, though, the topical writers haven’t escaped some criticism along the line. Much of it comes from within their ranks, from established folk-singers who feel that all of them write too fast and lack the willingness to polish their songs. Here and there around the folk circuit there are also occasional mumblings that some topical writers are opportunist‚ that they only hopped on the political song bandwagon because they saw it was heading for success. Whatever private opinion might be, though, the songwriters are getting unprecedented attention. Says New York Times folk critic Robert Shelton, “There have always been periods of stepped-up activity in topical song writing during periods of American crisis. In this case it’s so pronounced you can’t really understand what college-age Americans are thinking today without paying a good deal of attention to it. It’s the cultural-philosophical expression from a whole new generation — an expression that should be studied and respected alongside the writings in literary quarterlies or beside slogans on picket signs.”

Next to Bob Dylan, whose work more and more is turning toward the mystical and symbolist, the most gifted of these writers — or certainly the most prolific — seems to be 23-year-old Phil Ochs, who fled journalism school at Ohio State in 1961 when he realized few papers would print his views undiluted.

Today Ochs’ “agnostic Marxism,” sweetened by simple, often lyric melodies, is reaching more people than all the bloodless prose of all his classmates who stayed to master the inverted pyramid, a skill designed to dry up all creative juices.

Ochs is now in the position of a ballplayer who hit .285 his rookie year, or a dramatist who has written an impressive one-act play: everyone is predicting he is on he verge of a major breakthrough, that his meager $3000 earnings of 1963 will be 10 times that in 1965.

Lunch with a mutual friend and an hour interview illuminated only Ochs’ most obvious characteristics: his clear headed-ness, his candor, his wit, his left-wing politics. His pilgrimage to his current plateau parallels that of most of his contemporaries: at first, a wall of rejection from the established folk-singers upon his arrival in the Village in the autumn of 1961; then meeting Dylan and Turner and the coalescing of a faction around Broadside; “passing the basket” in the Third Side Cafe for six months; the first put-downs by major record companies; dates at the Gaslight Cafe and concerts; finally, cutting an album for Elektra Records and now editing the tapes for his second one to be released in February — “a militant, no bull shit record.”

“I’m not a conventional folk-singer,” says Ochs when asked to define his talent. “I just use folk music to comment on the issues. My stuff is more an editorial than a song. I learned to play the guitar after I wrote a few songs.

“What we’re trying to do,” he explained, “is to give life to something that has been static for 20 years. We have had to overcome the bad reputation of those silly pop ditties of the ’50s. The major record companies are afraid of our material because it is so strong. They can’t believe a topical song can have any pertinence two weeks after it’s written.”

Then Ochs, the old journalism student, smiled and said: “Yes, pertinence, that’s the key word about us — put it in the article.”

As the topical song writers grew from a fraction to a move­ment, their fans, many of them teenagers, began to invest them with a halo of heroism that bothers Ochs.

“There’s nothing noble about what I’m doing. I’m writing to make money. I write about Cuba and Mississippi out of an inner need for expression, not to change the world. The roots of my songs are psychological, not political.”

But because of his material, his life style, his friends, and his politics, Ochs has become an integral part of the Village Left, appearing at its parties, rallies, and in its magazines. Neverthe­less, he sees his political role as unromantically as he sees every­thing else, and subservient to his song writing.

One of the 130 songs he has written is called “A Knock on the Door,” a comment on the universality of totalitarianism. One of the verses recalls the Stalinist knock on the door.

“Sure, some of my friends got upset at that verse and at a lot of others I’ve written. But they got over it. I know the dangers of letting politics dominate art, and I keep the two apart as much as I can … For example, I’m always getting asked to sing at this rally or that rally. I know I’m being used in the most callous way. But most of the time I go anyway, partly because it is good for my career, and partly because I see part of my job as a fund-raiser for SNCC.

”Another example is the new­est song I wrote, last week, about Mississippi letting those 19 men go free. It’s a hate song. It says Mississippi should get the hell out or the union. My friends in the Movement say I shouldn’t write a song like that but it rep­resents the hate I feel for Mississippi so I am going to add it to my new record, even though the tapes are already edited.”

Ochs’ rational view even ex­tends to his own talent. “I can tell I’m just beginning to write decent stuff,” he says. “I can feel the images and symbols coming more easily. And as I reach new levels, I can begin to fathom what Dylan’s songs are all about. What he does naturally, I still have to work at. But I’m getting there. I’m beginning to read poets like Brecht.”

I asked him if he had read the Popularist poet Vachel Lindsay. He replied he had not, but asked me to write his name down and promised to buy some of his verse.

It is perhaps Ochs’ honesty and maverick spirit that are his biggest assets. The sense of outrage that fuels his pen is unencumbered by dogma. He knows how a party line can poison the wellsprings of creativity. So he goes on writing about the labor movement’s stains of racism, America’s folly in Vietnam, and songs like “The Ballad of Medgar Evers” and “I Ain’t Marching Any More,” the title of his new album. But he can also write a love song to America called “The Power and the Glory,” that con­cludes:

”Here is a land full of power and glory/ Beauty that words cannot recall/ Oh, her power shall rest on the strength of her freedom/ Her glory shall rest on us all/

“Yet she’s only as rich as the poorest of the poor/ Only as free as a padlocked prison door/ Only as strong as our love for this land/ Only as tall as we stand.” ■ 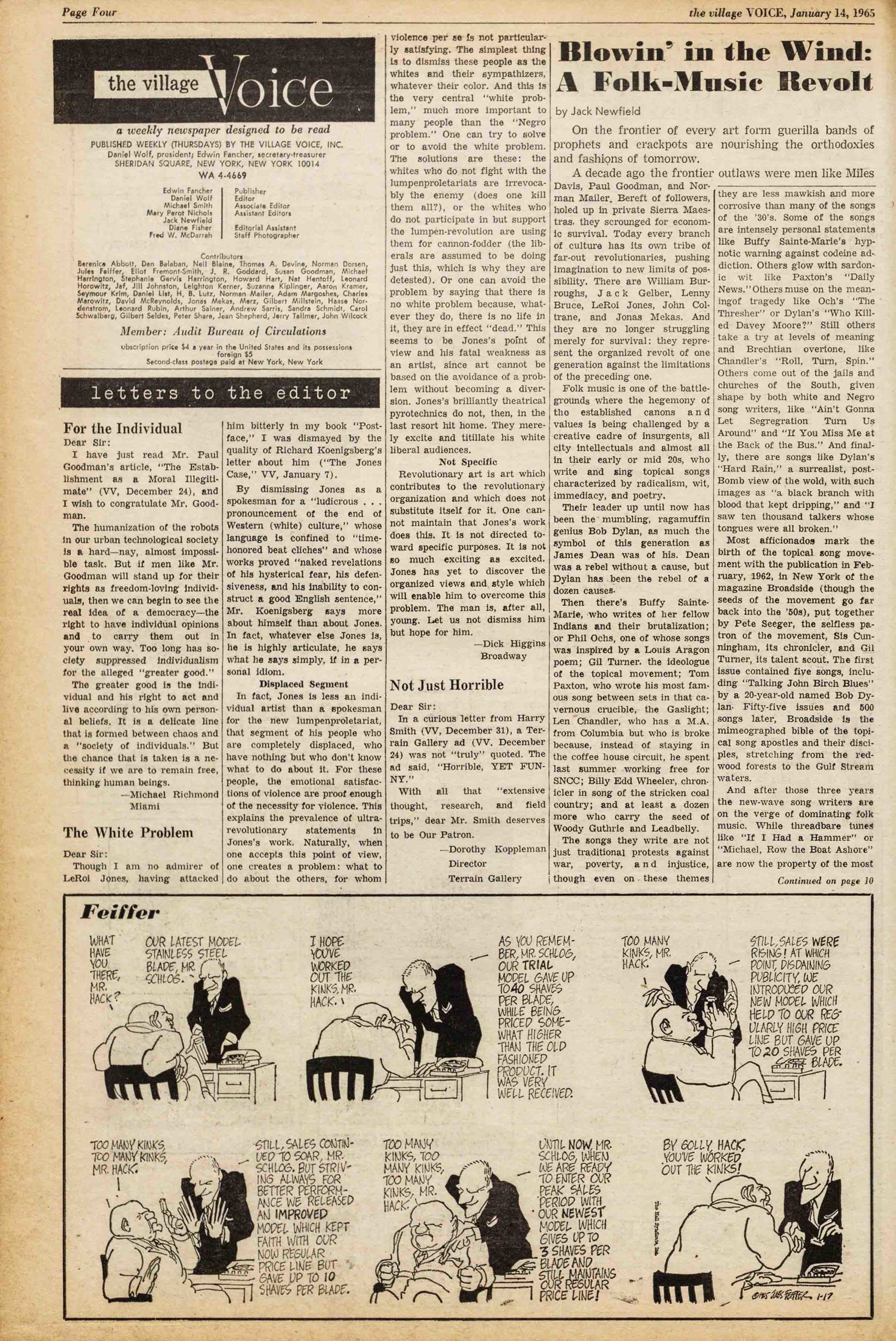 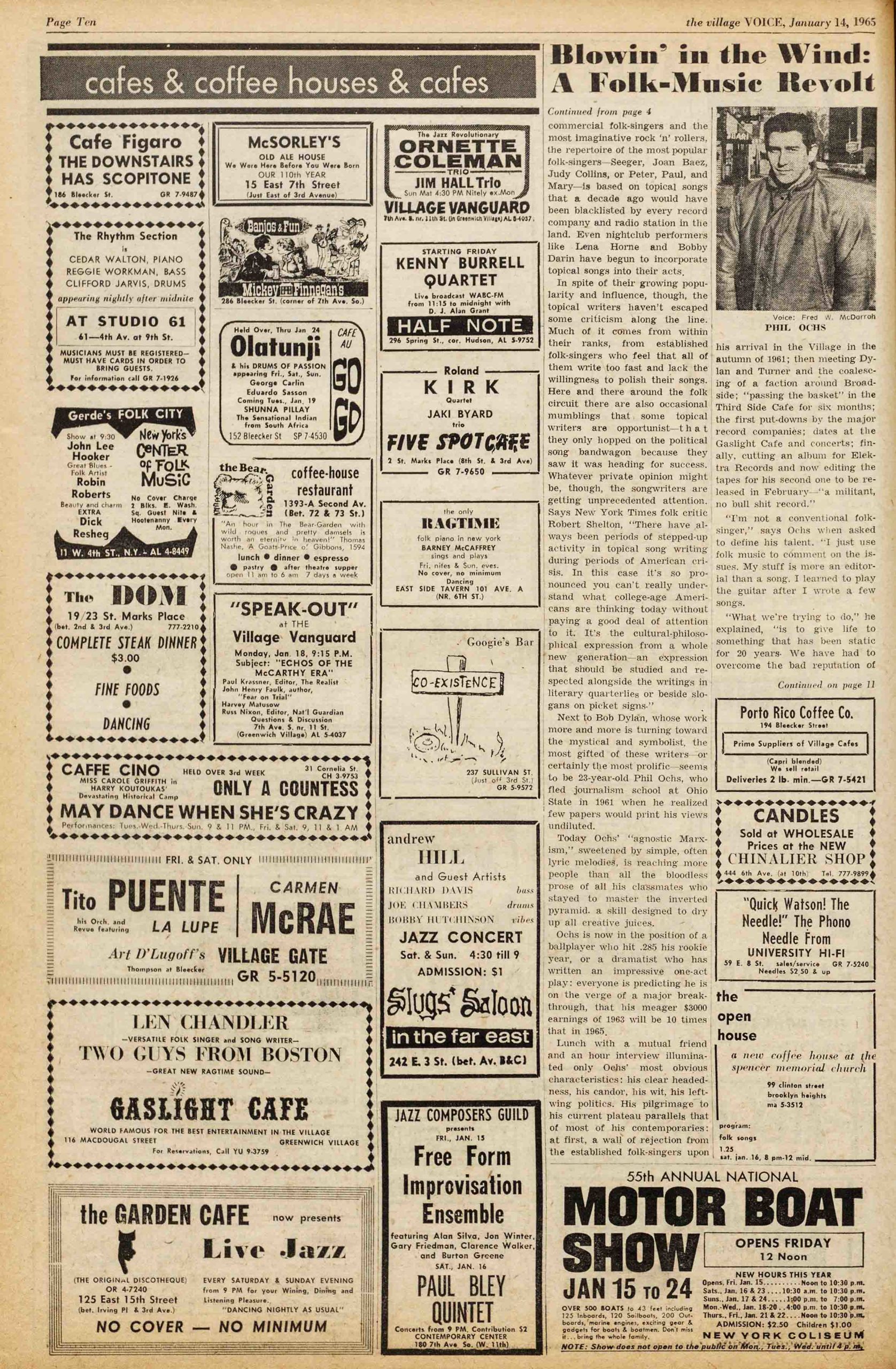 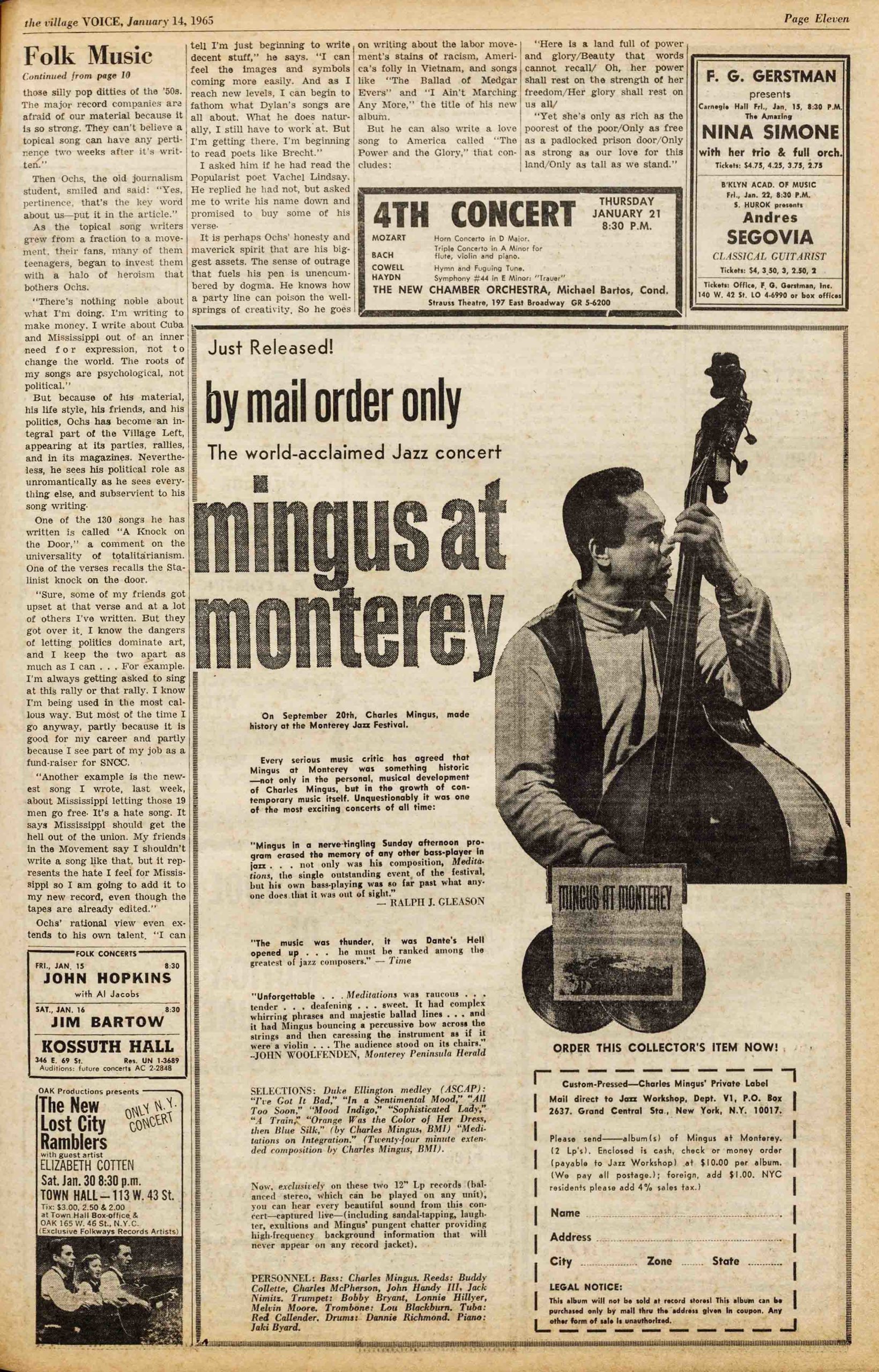