“Everybody wanted to know where Tom Wolfe had sprung from, this brilliantly talented, seemingly ubiquitous, altogether mysteriously third-person journalist”

Everybody knows all about Tom Wolfe.

Once there was THE Tom Wolfe, and suddenly there was the other TOM WOLFE.

Everybody was reading Esquire and the Herald Tribune’s magazine, New York, to see what Tom Wolfe was up to. People who didn’t really care about custom-built sports cars or stock car racers had to hear what Tom Wolfe was saying about them … one never merely reads Tom Wolfe’s descriptions, one hears, smells, touches them.

Addison and Steele pointed out a long time ago that readers have a gentle foible, they like to know what authors look like. Look like? Today’s readers demand and have acquired the right to know, possess, devour, destroy writers. Everybody wanted to know where Tom Wolfe had sprung from, this brilliantly talented, seemingly ubiquitous, altogether mysteriously third-person journalist. They found out, at least superficially, because Tom Wolfe may shake down just to be the hometown favorite, but when the home-town is New York City, he becomes the most superficially-newsweekly-written-about man of the hour, minute, issue. He came from Virginia. He was not related to the other Wolfe. He got his PhD in American Social and Intellectual History from Yale. He spent a few obscure years as a newspaper reporter in Washington and Latin America. He wrote “The Kandy-Kolored Tangerine-Flake Streamline Baby” for Esquire, and all hell broke loose. There he was — The Man, the hottest property in town.

Everybody saw his picture and knew that he looks like an Oscar Wildean concept of Huckleberry Finn, that he wears custom-tailored kandy-kolored tangerine-flake streamline clothes — yellow suits, white silk-tweed suits, and one glorious mother of an orange suit. Everybody doesn’t know that somewhere in the West 40s is a tie-store owner who doesn’t care what or how Tom Wolfe writes, but appreciates him because he comes in once in a while to pick out something from the Second World War stock. “Er, Tom, when you … that is … what do you … you must … I mean, when you have to run out to pick up a cigar or something … ” “No, I don’t own any casual clothes.”

Everybody knows that Tom Wolfe gave Form to Meaningful Trivia. Somewhere there was a girl whose name was being mentioned in all the gossip and society columns, a girl with no talent, a girl who existed only to be mentioned, and everybody, every other writer in the city, knew she was there, but Tom Wolfe gave Shape and Meaning to Baby Jane (referred to in the Times as Mrs. Leonard) Holzer. He described her as “gorgeous in the most outrageous way,” with hair rising up from her head in a “huge hairy corona, a huge tan mane.” Now the dailies run tacky ads for cheap stores featuring sketches of tall androgynous girls in tight slacks with hair rising up from their head in a huge hairy corona. That’s Baby Jane … and Tom Wolfe’s put her There.

Writing just a few pieces in which he used pure newspaperman-description enhanced by stylistic brilliance, Tom Wolfe made a viable thing out of a sensibility crushed to death later when Susan Sontag sat on it. But Tom Wolfe could do more than describe a here-today-gone-tomorrow. Tom Wolfe could put on his Utterly Outrageous Uptown Clothes and walk into the lower East Side, and instead of being beaten up as an outside dandy (Wolfe’s a big, sturdy man in excellent condition, with mean-looking hands that could kill you), walked out with a great story.

And then came the rumors. A war. Tom Wolfe, heavens forbid, was writing an article about the New Yorker. Holy hell. What nerve. That ballsy bastard, did nothing frighten him? The prospect didn’t make the New Yorker happy. Matter of fact, they got kind of menopause-irritable about it. Hysterical’s the precise word. The New Yorker sent an undercover girl to the Trib to pick up back issues of Wolfe’s articles. Back at the Institution, Lillian Ross was rolling out her old cannon. They’d blow that boy to smithereens. Voila. The opening shot at Fort Sumter. Lillian Ross had PARODIED Tom Wolfe, and if that didn’t stop those damned kids over at the Tribune, nothing would. Tom enjoyed the parody very much (he’s enjoyed at least 11 by now). Everybody didn’t know that though. People on the streets were holding their breath. Would Tom Wolfe send over his typewriter wrapped in a white flag? Would he apologize for his youthful foolishness? Nope. Word got around. Tom Wolfe had just sent his manuscript down to the printer. Nothing would stop the Trib and Tom now except maybe if the New Yorker rounded up all the back issues of their magazine from cocktail tables all over Westchester and dropped them on top of the Trib building, reducing it to an ashtray.

The Big Sunday came. Everybody read the first installment of the two-part series. Oh dear, it didn’t quite make it. All the people who have been waiting 10, 20 years to see the Job Done On The New Yorker That It Deserves were almost in tears. Oh God, they had expected Something Big and it didn’t come off. He hadn’t gone quite deep enough. He hadn’t spent quite enough time on it. His style, so marvelously suited for sounds, sights, smells, textures, for Living Things, wasn’t quite appropriate. There was no sound to get across except a quiet FLOP, no smell except DECAY. He had encountered the age-old problem, possibly incapable of solution, of making a dull subject interesting.

But it didn’t really matter. The attacks against him were delicious. The entire New Yorker stable and their outside apologists came on like bulls. He had smoked out J.D. Salinger. J.D. Salinger sent down word that he was not happy with Tom Wolfe. Nat Hentoff said he would no longer write for New York. There! let the Herald Tribune’s New York live with that. Muriel Spark said that she was a “professional” observer of people, and when she looked at Tom Wolfe she was irritated. Ved Medha said that Walter Lippmann was kind of upset too. Vicious, he was vicious, everyone said. Scurrilous, unclean, un-American, a thoroughly bad boy. Christ, all the poor bastard had done was to write a sometimes-brilliant (the white socks part was without peer in incisiveness), sometimes-inadequate piece that didn’t come off. Some people said he was a Nihilist, no values at all; others said he was a Chinese Red, taking orders straight from Peking; a few thought he might be working for the CIA; one Baptist minister must have stood up somewhere in the South the next Sunday and said that Tom Wolfe was a good Christian who took orders only from God.

Everybody knows Tom Wolfe is still the hottest property in town. They also know that someone will come up and bump him off. But if they have any brains at all, they should also realize that Tom Wolfe is 34 years old, extremely talented, and capable of development. Horses don’t die after they win their first big race.

Meanwhile, Farrar, Straus and Giroux is holding a publication party for Tom Wolfe on June 29 to celebrate a collection called The Kandy-Kolored Tangerine-Flake Streamline Baby. It’s being held at the Gallery of Modern Art, and everybody expects something to Happen.

The party itself will be nice, pleasant, well-mannered, reflecting the decency, graciousness, and Victorian good taste of the guest of honor.

Every daily and newsmag columnist will go back to the office and write a report on the party in Tom Wolfe’s style, because writers enjoy writing like Tom. It’s young and it’s free and it’s a hell of a lot of fun.

Everybody will feel comfortable again, because they’ll think that once more they know all about Tom Wolfe.

What’s not true. What everybody does not know is that Tom Wolfe once pitched semi-pro ball in Roanoke, and his best pitch was a … but no, I won’t tell you. I’ve already scooped every columnist in town. 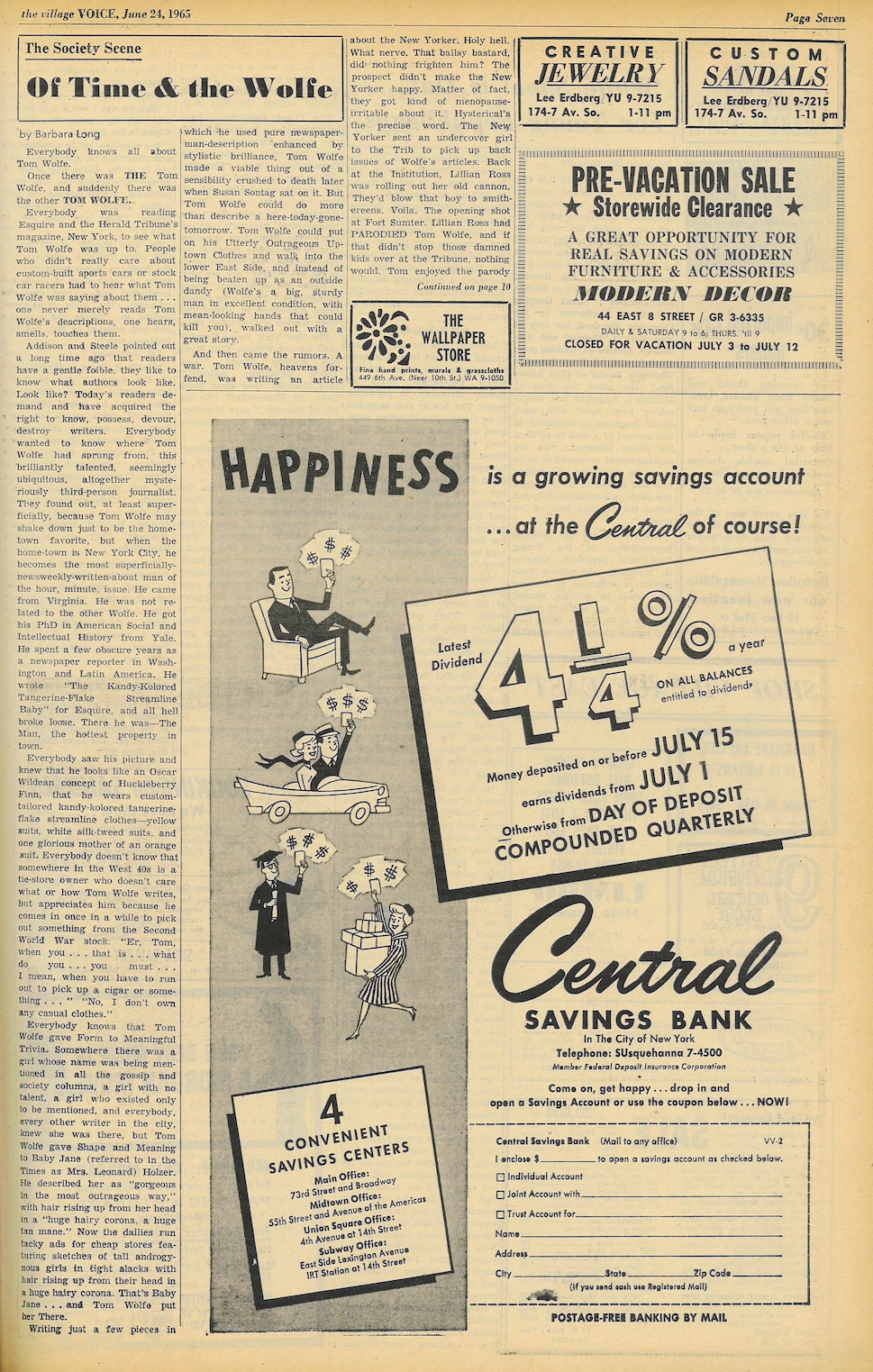 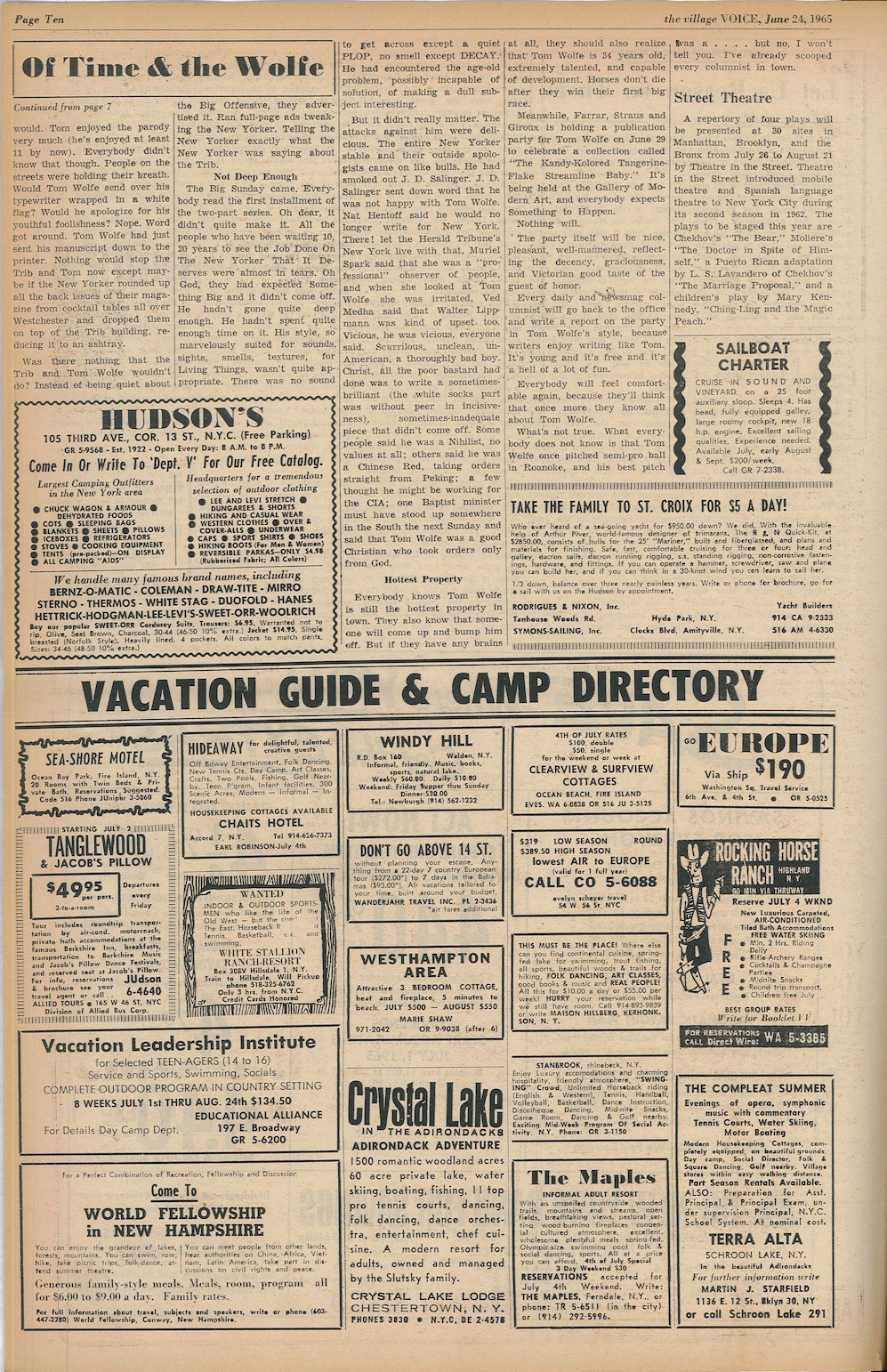 This article from the Village Voice Archive was posted on August 28, 2020