Neither Nixon Nor Troops Should Stay These Men

“Solidarity,” that tired labor union catchword, took on real meaning for me on Monday afternoon, at the moment President Nixon announced that he was sending troops to New York. I stood with about 500 postal workers in front of the General Post Office across from Penn Station, listening on transistor radios to the President’s pious rhetoric. There was about half a minute’s hush while each worker seemed to ponder all that awesome power of the United States government and its mighty army — all seeming to focus on him alone, or on his family, or on a pension only a year or two away. But then there was a great roar of “no” to the president as 500 men felt the strength of sticking with the union.

Solidarity but not community, for these men are politically as diverse as the society at large. A small minority wearing American flag pins and “Support Our Boys” buttons tried to destroy newspapers and leaflets being distributed by members of the Workers League, Progressive Labor, and the International Socialists. “We don’t need help from reds,” they said. But most were tolerant of the leftists, and accepted and read the leaflets, some of which were notable for their irrelevance. At least one postman, however, came to the conclusion that “to the people who run this country we are the same as the Vietnamese.”

Everyone agreed that without the blacks and the young whites there would have been no strike, not because of the politics of these elements but because of their fearlessness. “They just aren’t going to take the shit we came to accept as normal,” an older worker explained. Militancy rather than radicalism was the keynote.

The postal workers judged that the troops were being sent to inspire fear rather than move the mails, and that the fear might do the job for the government, especially outside the city, where solidarity is weaker. Workers claimed that postal sorting schemes take weeks to learn and that any resumption of normal mailing by the public would result in colossal foul-ups by untrained soldier-scabs. Almost all the postmen are veterans. One humorously presented this as a typical scene: “Private Schmuck: ‘Sir, where does zip code 07548 go?’ Sergeant Putz: ‘Why the hell you asking me, I’m a non-commissioned officer.’ ”

Whether the postmen are correctly estimating the complexity of their jobs, a postal outsider cannot evaluate. With few weeks on the job and with the aid of supervisors, some of whom are unsympathetic to the ordinary clerks and carriers, the army might actually be able to deliver the mail — provided they are not physically interfered with by striking  postmen. Those I spoke with were overwhelmingly against the use of any kind of violence, but the arrogance of the Nixon administration has been so successful at angering the government’s most conservative and loyal workers that it just might provoke more desperate acts. Compare your mailman to a cop, a garbage man, or a cab driver. He is definitely the least surly of our public servants. Imagine the pent-up rage. One of the most repeated complaints I heard from strikers was about the “patronizing attitude” of the government toward them.

If they don’t interfere with the troops, they can try something even more shattering to the American status quo — organizing a general strike. A friend of mine with experience in both Europe and America laid out the revolutionary dream scenario: postmen, wearing the hats from their uniforms and with their union pins prominent, go in car pools to workers at the Ford assembly plant in northern New Jersey, to factories all over the metropolitan area, to subway, rail, and truck depots, and to every worker who will listen and say: “This struggle is yours as well as ours. Troops used against us may be used against you. Put down your tools and join us on strike.”

The workers all go out and a shaken government accepts their demands (or faces overthrow). It doesn’t happen often in Europe, but it has happened enough times to produce consciousness of labor as a great slumbering giant not to be casually awakened.

One thing is certain: if there ever is a general strike, it will be called by workers, not by their leaders. James H. Rademacher, president of the National Association of Letter Carriers, says he will ask George Meany to call a nation-wide strike if the government offers nothing by Friday. But Meany will be about as willing to do this as Rademacher was to lead his own men out. And there have been few statements of support from union leadership in the city or in the country. This strike is as much against the union leadership as against the government employer.

Moe Biller, Manhattan and Bronx Postal Union president, who had fled through a kitchen at a meeting last Thursday, flashed the V sign to his men at the General Post Office. He looked frightened. If he is forced to pay $10,000 a day in fines or sent to jail, he will be the first victim on the altar of Nixon proposed postal re-organization (to which the President has tied postal pay raises).

All of us who use the mails will to a lesser extent follow. Nixon wants to create a “public authority” to run the Post Office. As with all public authorities — like our own Port Authority and and Transit Authority — this is a way of diminishing public accountability in the name of fiscal solvency. We can look forward to a postal authority run for the benefit of big mailers like Time Inc., Readers Digest, Sears Roebuck, and Chase Manhattan. They already receive preferential rates subsidized by our taxes and our six-cent stamps. With a self-sustaining authority, we would be subsidizing them with 10-cent stamps.

What’s wrong with the post office is its bureaucracy, low pay, and inequitable rates, not its status as a government agency. The private telephone company isn’t managing service so well. It keeps its profits up, however, by charging twice as much for service as anywhere else on earth. In most countries, telephone profits go into the postal service.

Nixon’s Postal Authority is supposed to put postal service on a pay-as-you-go basis, like the New York subways. I might see this principle as more reasonable if it were applied across the board to all government services. We could have a pay-as-you-go army, air force, CIA, and FBI. When these agencies failed to show profits, services would be cut back. Forces in Laos or Thailand, for example, could be brought home for being in the red by the same procedure the Transit Authority used in closing the profitless Myrtle Avenue line in Brooklyn last autumn. And the bill for Vietnam could be footed by those who like the war.

I would choose to sustain my brave and friendly mailman. ■ 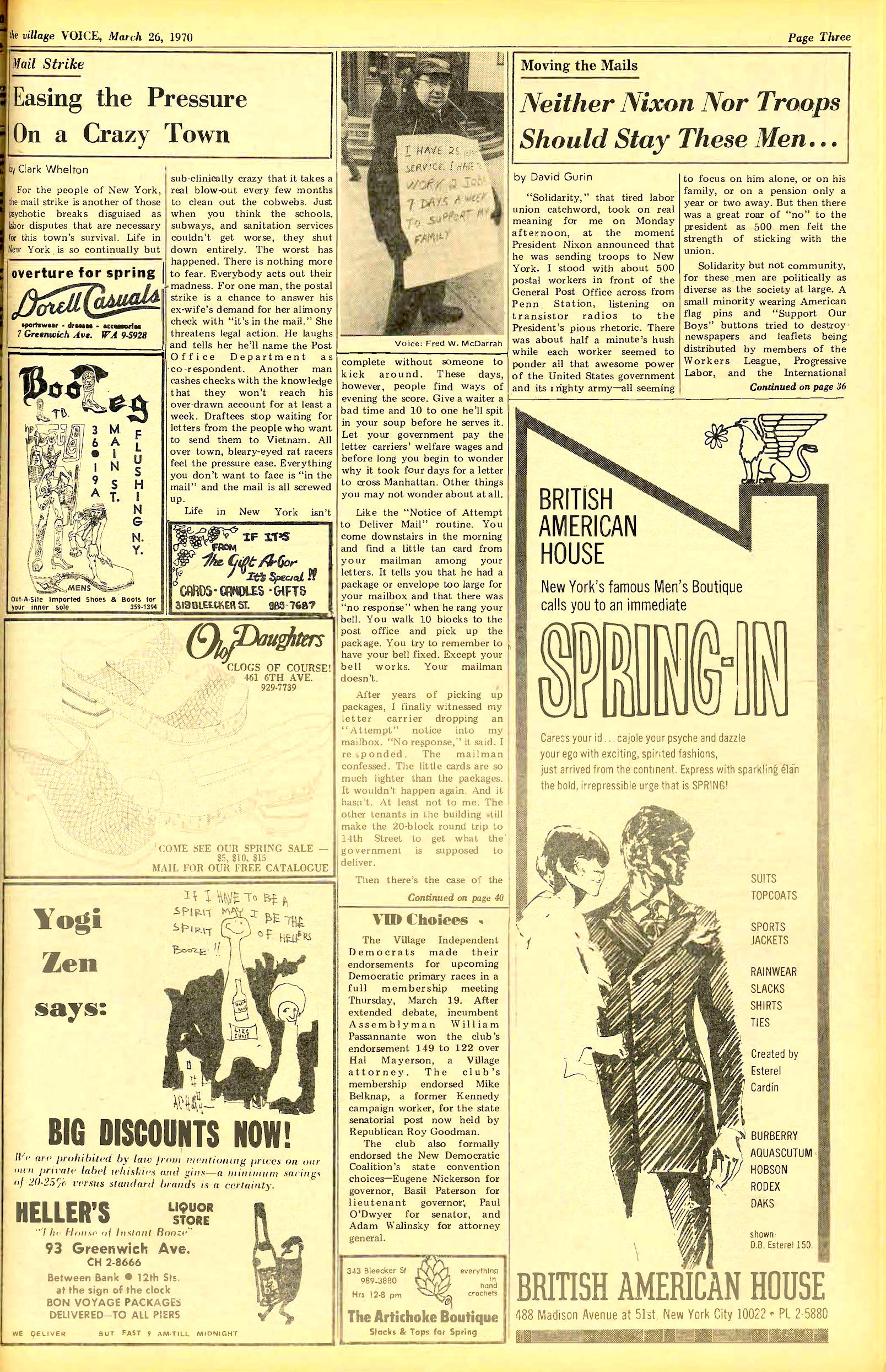 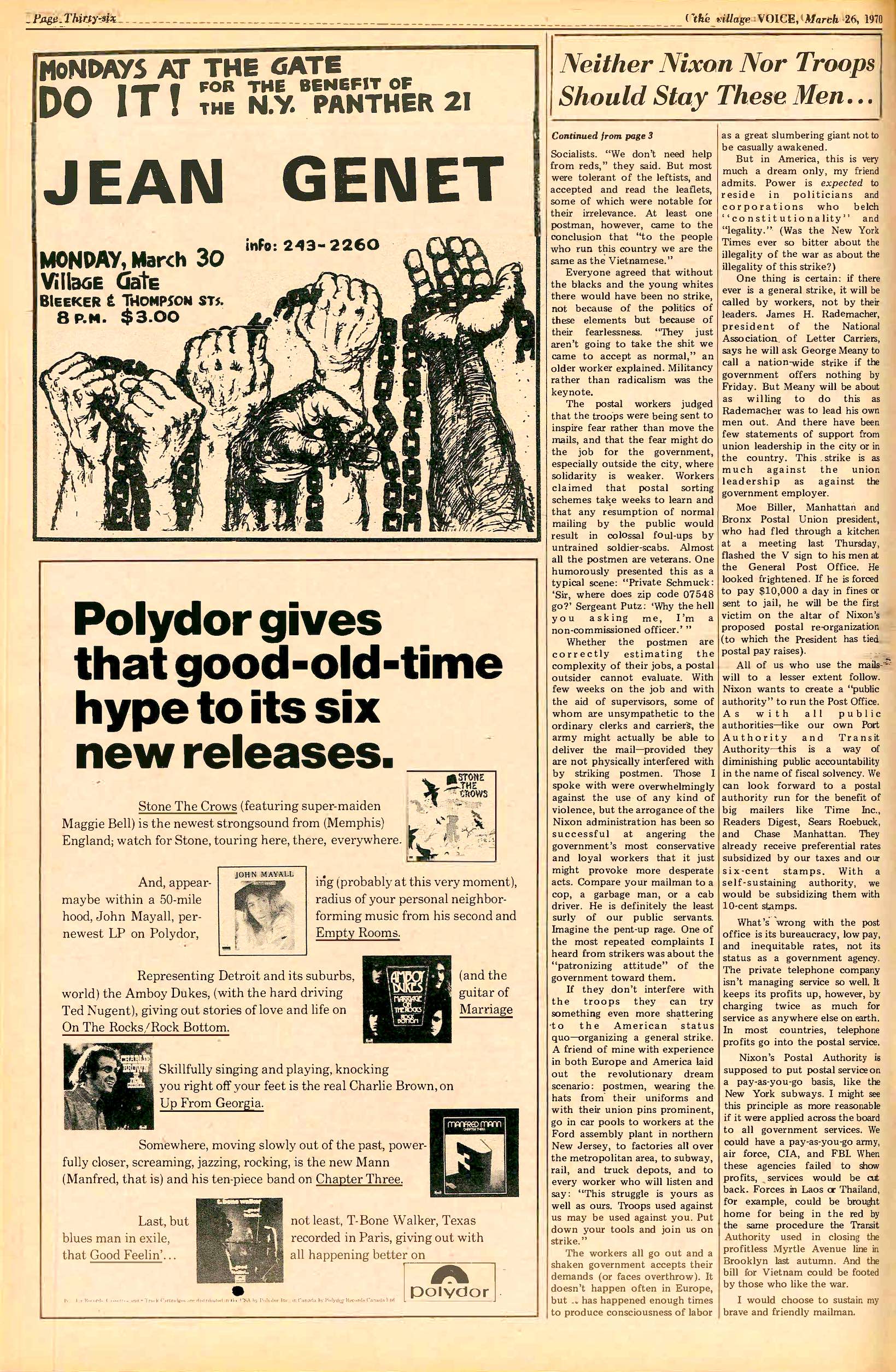