Showtime! The Theater of Politics

SAN FRANCISCO — Thursday, July 12, 7 a.m. Arrived from Newark three hours ago. I should be thinking about politics as theater. Again? Is it three hours earlier or 15 years ago? Did I ever believe the medium was the message? Consider spectacle (authoritarian, hierar­chical, scripted) versus spontaneous show (free spirited, multifocus, improvisatory). Consider Nuremburg rallies and fascist total theater. May Day rallies and Stalin­ist total theater? Jet lag is turning me into a Sontagite: aesthetically correct but no good. Yippies casting dollar bills into the Stock Exchange? Still no good, that was for the media. Everything is for the media? Back to sleep and troubled dreams of Wagner and Abbie Hoffman, Reagan and Jane Fonda.

My press credentials neatly clarified matters: for the “perimeter” only. The fringe, the outside, the spectator’s seat. The front-of-the-book men ferret out and analyze issues; Munk watches demos and parades. Base and superstructure, slight­ly muddled by the fact that the serious stuff is a performance, and the sideshows are serious.

At noon the National March for Lesbi­an and Gay Rights held a press confer­ence in City Hall directed at Jerry Fal­well’s descent on the city with his two-day training conference for the Moral Majority leadership. It was pious, proper, and moving. Harry Britt, the gay socialist member of the Board of Super­visors, denounced Falwell as a man whose words are spiritual but whose content is hate and divisiveness; the other speak­ers — Catholic, Episcopal, and Presbyteri­an religious, city officials, a gay father, the president of Parents and Friends of Lesbians and Gays — talk about hospital­ity, tolerance, St. Francis, God’s family, the Family, and the-values-that-made-­this-country-great. The scripts were tac­tically sound, maybe a bit obvious, yet right and true. One speaker, Miriam Ben-­Shalom, hit another note, demanding to talk to Falwell, outraged, using impolite words.

I wondered what tone the Sunday pa­rade would stress, made an appointment to talk with Britt, walked back down Market Street past a raucous picket line in front of Macy’s, another in front of the Emporium. Union Square was filled with gaggles of people yelling at each other, sectarians selling newspapers, a couple of punk types telling the sectarians that Hitler was your typical socialist, delegates and tourists walking purposefully looking, so to speak, neither left nor right.

A Falwell man said, “We will lose cer­tain freedoms by allowing homosexuality. If I have total freedom I can do anything to anybody. Roman society fell apart …” That’s their public style. A gay man proclaimed to the air, “Why, he’s Jerry Falwell’s husband!” An amoe­ba-faced suited man shouted, “Make it a felony,” but the Falwell fellow came back right away with “I don’t believe in that.” No one believed him.

I got press credentials at the Falwell conference and moseyed around the “New Traditional Woman” panel. Chil­dren sleeping on laps, on the floor. Speaker believes men should be true heads of household, women should have jobs if they must, but not careers they love. Everything was low-key, slow, bor­ing. Down in the lobby everyone peered out at a little demo and debated whether to go watch it. “I was on the other side in the ’60s, man, I don’t have to go see them.” “I hate confrontation, I’m a paci­fist at heart.” “I know a fellow who makes little bumper stickers saying ‘kill the gays’ and sells them. I mean, if you start talking like that …”

When I got back to Union Square, it was filled. No arguing. The crowd looked orderly, but then I could hardly see it through the masses of cops lined up like Rockettes, gripping their nightsticks, maneuvering skittishly on horseback.

The slogans moved from “women unite to fight the right” to “the only good pig is a dead pig.” Time warp. The cops moved from their rigid, fixed-face lineups, push­ing the horses right into the crowd on the sidewalk. Piles of garbage covered an in­tersection: looked like debris from a car­rot-juice maker, squeezed-out half or­anges, vegetable matter from a health food store. “It’s Chicago!” “It’s Buffalo, ’63, stupid.” I wanted to know what on earth happened in Buffalo, ’63, but some­one started setting off earsplitting fire­crackers. “What’s happening?” said a lady tourist to a lady cop. “It’s the moral majority versus the unmoral majority.” Of the latter, seven were arrested, at least one beaten, and the nurse who tried to help her was clubbed.

I walked through Chinatown to North Beach, where I lived more than 20 years ago, and stood for a while in front of the old house on Powell. It looked the same. The rest of the neighborhood has gone neon tacky or genteel. Back near Union Square a circle of candles had been set up on a sidewalk by religious gays, men and women, singing Christian and Jewish hymns. One woman quarreled politely with me because my colleague Nat Hen­toff was going to address the Falwell con­vention tomorrow. When I walked back to my hotel, the cops were quietly trot­ting their horses toward their stables.

Friday, July 13. Called Britt’s office at nine to confirm interview. When I told him I wanted to discuss the class, gender, and race issues that are left in the gay community after gross discrimination had been eliminated by power in local politics, he said he’d give me half an hour. Ten minutes later, just as I was leaving, the phone rang. “I’m not willing to be part of a story on the splits and divisions in the gay community when you guys aren’t doing the job about us. Sorry about that.” Slam.

I walked off, muttering gloomily about the end of dialogue, to the Falwell confer­ence, to see what Nat was telling them about medical ethics. He was being intro­duced: “Nat Hentoff, who fancies himself an atheist …” Nat recapitulated his ar­guments (you’ve read them in the Voice) about infanticide and euthanasia. He had some good digs at Reagan and at profes­sional omertá, some friendly self-deprecation (“I’m the handy, ubiquitous athe­ist in this matter”), and an argument, which would have been fine had the seamlessness started a few months far­ther along the way.

Midspeech, two young women, neatly dressed like Moral Majoritarians, stood up in the audience and embraced each other. First like friends meeting after a long absence, then sexily. The spectators were appalled, in a repressed kind of way, murmuring and shifting. After a minute or so, the pair was quietly escorted out, chanting, “We are everywhere. We are your daughters and your sisters. Our daughters will be here and our daughter’s daughters.” Nat waxed sarcastic, “Today?”

Maybe the women should have been more to the point and brought a poor, single mother with a severely handicapped child. Still, Nat wooed the audi­ence back to himself at the women’s expense. I was too angry to concentrate on the rest of the talk; my mind was on the company he keeps. So I left this confer­ence on “Being My Brother’s Keeper,” and went back to Union Square.

Where the Sisters of Perpetual Indulgence — six men in giddily S/M nun drag — were exorcising Jerry Falwell. Sis­ter Boom-Boom (who, as Jack Fertig, ran for supervisor in 1982 and got 23,000 votes), sang “Your son will come out tomorrow,” and made terrible jokes. “The Moral Majority is here with Hell n’ Damnation! Hi Helen!” Falwell was stripped down to a black merry widow and stockings, and got it on with Jesus, in a Counter-Reformation loin cloth. There was something odd about an anti-Fein­stein song which seemed to say that her problem was female machismo, and something odder about a purification rite for Phyllis Schlafly by holding her down and tearing a rubber snake from under her dress. But what the hell.

A couple of hours later I went to Glide Churches’ “Celebrating the Poor” festi­val. Here the only question was whether the Reverend Cecil Williams was just putting on a show or doing good works and putting on a show. The church is a short walk and a different world from Union Square. An enormous line — 3000 people in the course of the evening­ — waited for food. I talked to a young woman out of work who said the food’s not just for the convention-time cameras; there’s a special meal once a week, and all the food’s better than the other soup kitchens. Williams gave the press lots of rhetoric while people with trays of food jostled around. At one point he stopped for a minute and yelled, “I wanna ask you, everybody, is anything better than Reagan?” And everyone shouted, “Yes.”

Upstairs in the church proper, a multi­colored disco wheel turned among the stained glass windows, while the Glide Memorial Gospel Singers sat on the altar steps. The press milled around, waiting for a senator, a supervisor, a delegate, a Lefty, Godot (sorry). Vietnam vet Ron Kovick and Assembly Speaker Willie Brown came, Harold Washington and Dianne Feinstein didn’t show. I had to go see some theater. On a stage.

Duck’s Breath Mystery Theater was doing a “convention special” — apparent­ly the only topical work among the estab­lished theater groups. They promised it would be biting satire, sharp, strong, political. Maybe a Dying Pet Sale — “the misfortunes of my pets mean a bargain for you” — or the Piece and Pizza Coali­tion, or “Shop Without Guilt, Vote Without Fear,” are funny. They are as funny as it got. I left plunged in gloom, striding again through the wreck of my old haunts.

Saturday, July 14. Every community organization, union local, sect, countersect, and groupuscle was huddled in doors planning for the big parades tomor­row, so I walked around Golden Gate Park. A sign pointed me to Peacequake ’84: a rock band was playing in a dell for a smallish, friendly, stoned crowd that seemed frozen in time. Who’s Afraid of Thomas Woolf?

The San Francisco Mime Thoupe was doing their new show, based on A Christ­mas Carole, and propagandizing for voter registration. I don’t recall the SFMT ever taking a stand for the Democratic party before. I’ve seen a lot of Revolutionary Commmunist posters around town urging the People not to vote, and perhaps they represent a chunk of the radical commu­nity, but it was hard to believe that this nice young audience, mostly white and not particularly militant looking, was dis­affected from the electoral process.

The plot concerns Ebeneezer Jones, an extremely upwardly mobile black lawyer in his thirties who’s too cynical to vote. Nixon appears, untwining tapes from his bulging pockets and shows Ebeneezer’s past (college radicalism), the present (Marcos, Pinochet), and the future — not a nuclear one, but the Supreme Court, convicting Jessie Jackson of terrorism and proclaiming that “Freedom Is Security.”

Some of this was funny, but it seemed a little flat and heavy-handed and with­out much physical pizzazz, though the music was good. I hope the Mime Thoupe hasn’t lost it’s dramaturgical verve by adopting sensible politics.

Spent the evening at a spectacularly catered party on a spectacular hill, a fundraiser for the Lesbian and Gay Pa­rade given by Lia Belli, who’s running for state senate. It was full of rich homosex­uals, which meant, of course, that there were three times as many men as women. I ate my fresh lichees wrapped in raw snow peas, and paté and brie and nectar­ines. I talked to a black lesbian activist mother, who’s running for the board of supervisors, and was tending bar. I was bemused. I went to a lot of other parties. They were not theater.

And nobody talked about anything. The spectacle was still to come; so was the substance. ■ 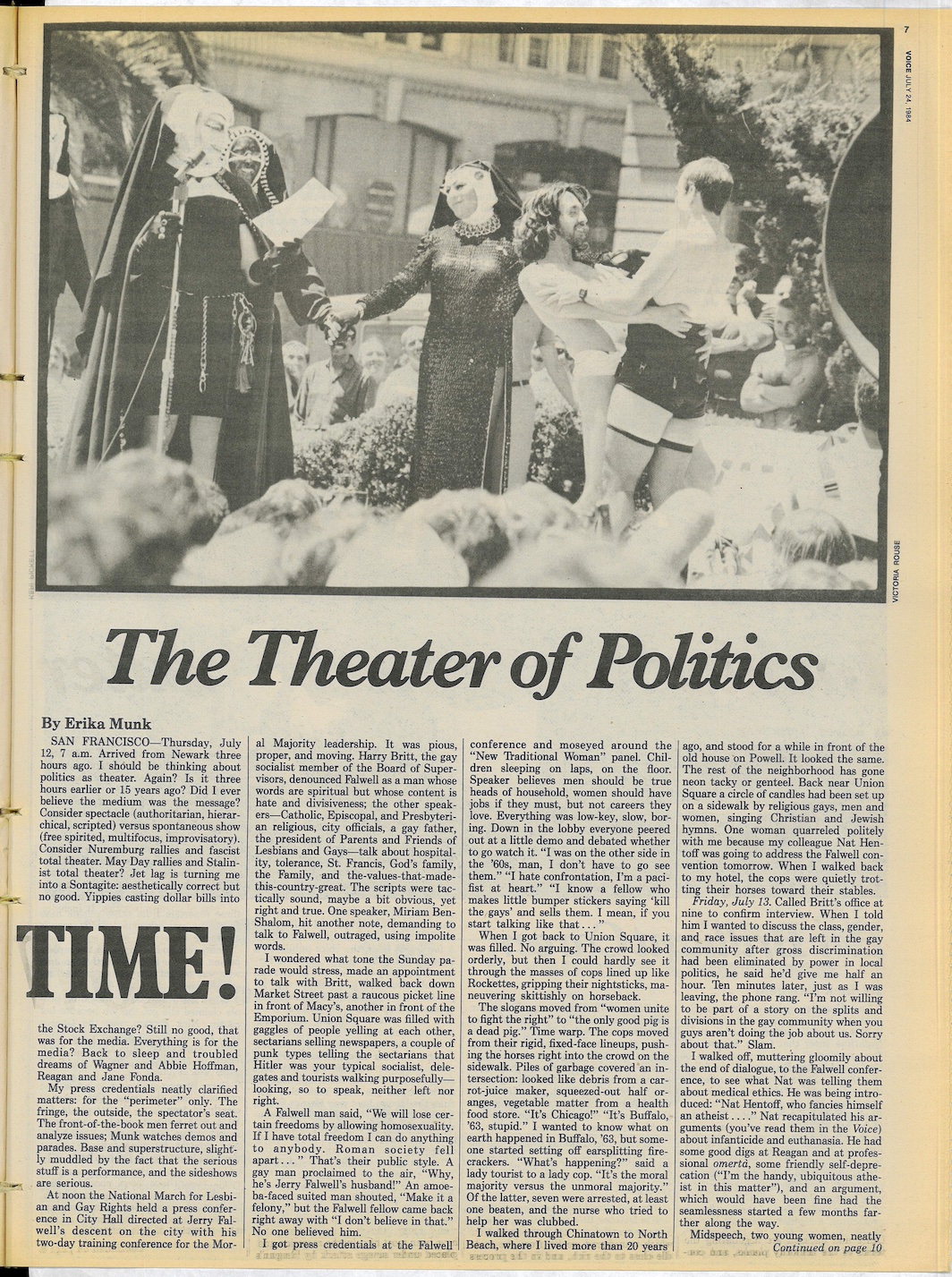 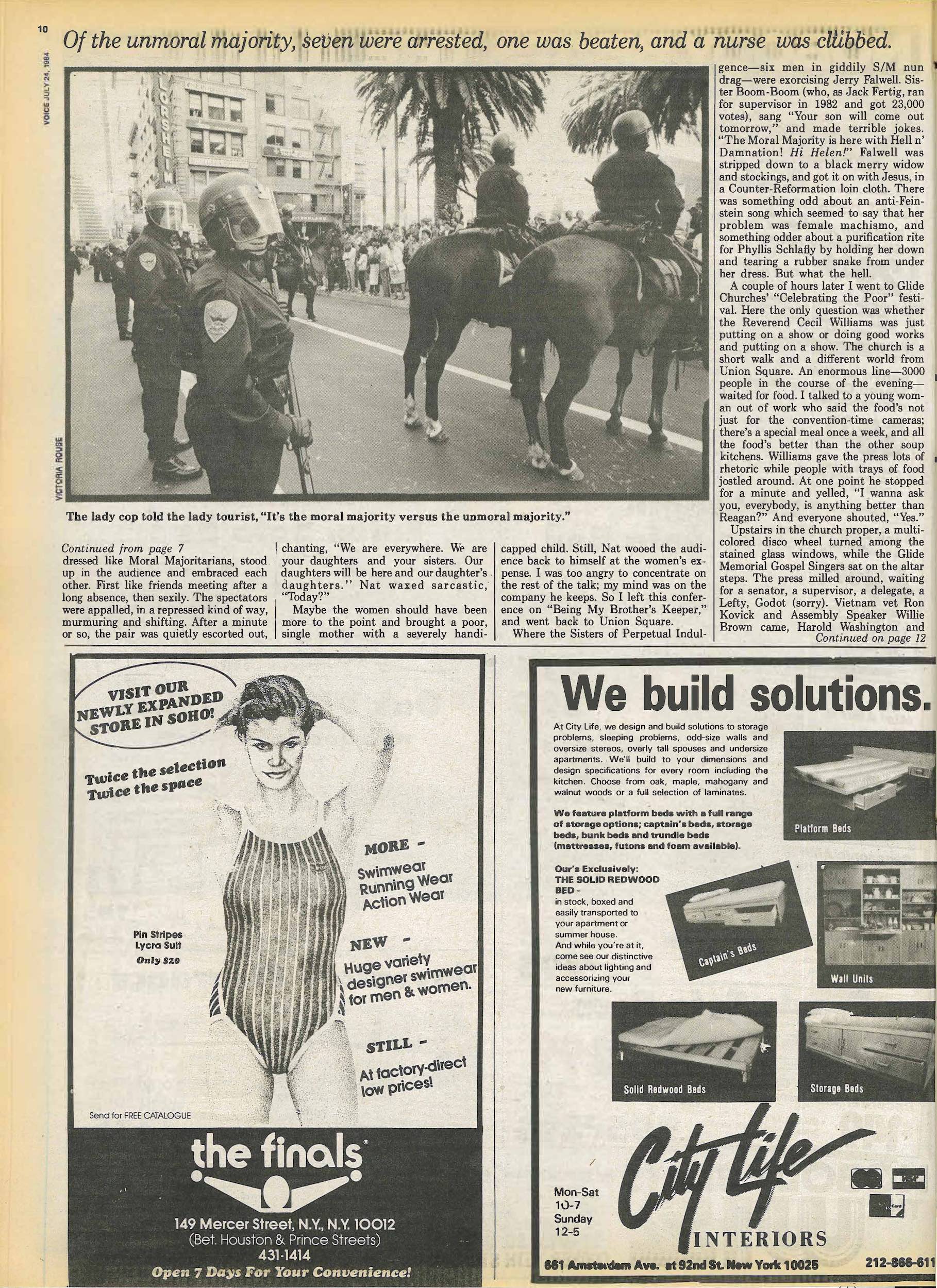 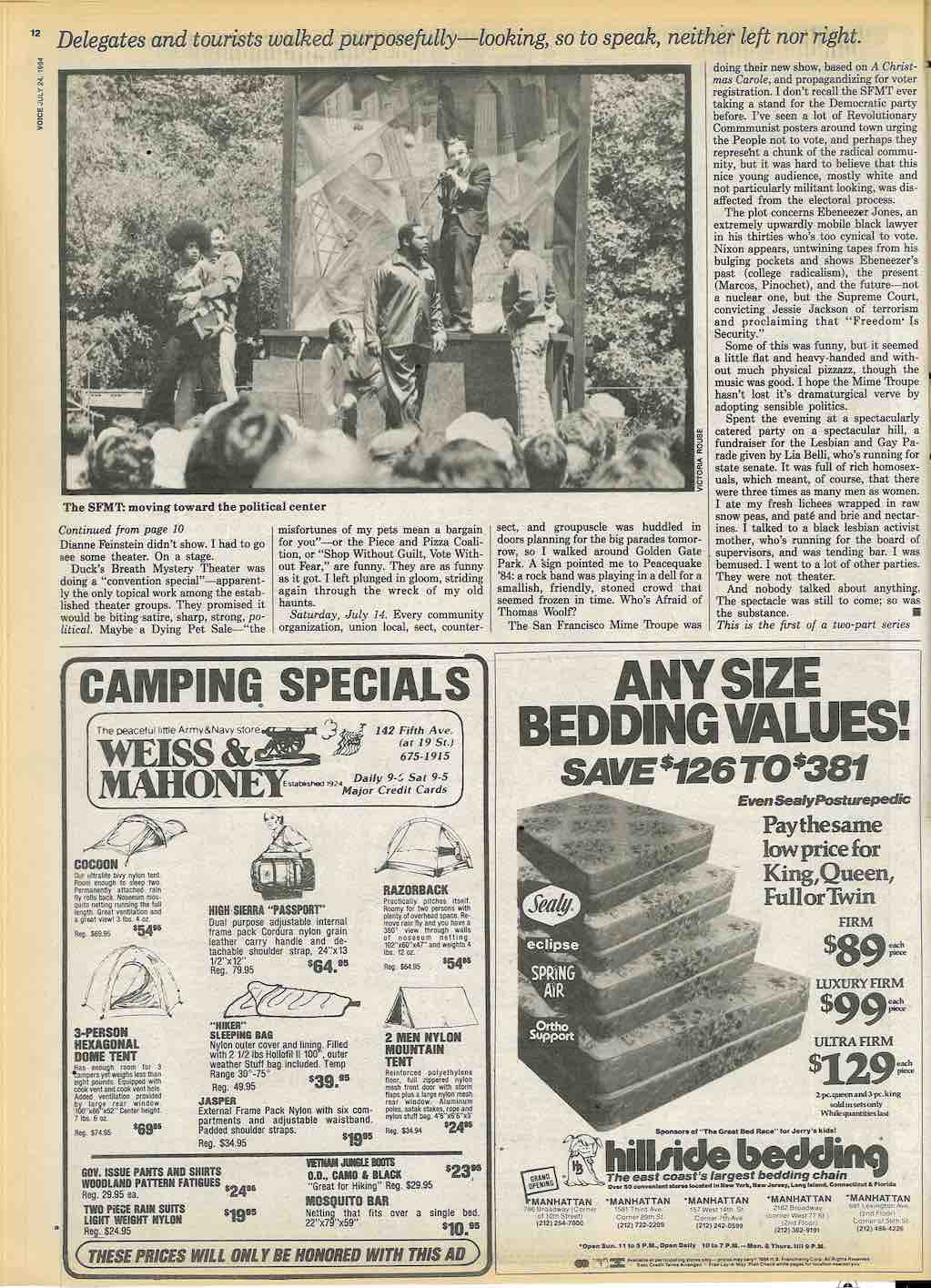