The Way of All Flesh: Stripping for Inaction

I have seen the future — and it doesn’t work.

According to a telegram which arrived at the office late Friday afternoon, “JAPANESE SCULPTRESS KUSAMA WILL STAGE A SPECTACULAR MASS NAK­ED HAPPENING AT THE GYM­NASIUM 420 EAST 71 STREET NEW YORK CITY AT 10 PM THIS FRIDAY JANUARY 26.”

“Those things never start on time,” I was informed.

So I showed up about 10:40 just as the first young man slipped off his shirt and pants. Within seconds half a dozen young men joined him, all body-paint­ed, all well-lit by the over-lap­ping flash of photographer’s bulbs.

On a stage at the far end of the gym, the Group Image was performing against a huge back­drop of multiple — projections. It isn’t accurate to say they play extremely loudly — like many groups, they don’t seem to make sound at all, but to have enter­ed another sensory dimension altogether. Movies were projected on several screens hung from the ceiling, moving lights dappled the walls, and from time to time strips of paper were thrown from the balcony. Two or three hundred hippies — the term is still valid in certain environ­ments — were dancing in various stages of consciousness.

And in a kind of pen at the entrance-end of the gym, about the size of a boxing ring, with fluorescent posts at the corners and a C-movie projected on a screen at the back, the naked dancing continued — now 10 or 12 young men, and a few on the main dance floor itself.

“Put your clothes on,” the owner of the Gymnasium vainly implored, but suddenly, in a heterosexual followup to last week’s naked happening at the Palm Gardens, a fleshy blonde girl strode naked into the pen, and the crowd, merely curious up to this point, clustered quickly around the area. The girl danced for a few minutes, then disap­peared as quickly as she’d come — into clothes and into newsprint.

A little later, another girl lay down in a corner of the pen and casually smoked a dubious ci­garette as her boy-friend gently lifted her skirt and deftly painted — but not so deftly that it didn’t tickle — what John Cle­land referred to as “nether lips”. Eastman-Kodak stock must have jumped at least a point, and a Time reporter, more indignant than curious, asked “is this what’s going on in New York?”

For the next hour or so the over 30 reporters and photo­graphers waited around, Marty-­like, for more [of] what used to be called “action.” But finally Ku­sama admitted that that was pretty much it for the evening, and she seemed as disappointed as anyone.

Actually, I’d very much wanted to like it. On the way up on the subway, I vowed not to use the banal and obvious jokes like telling boys from girls or having it up to here with nudity. After all, everyone had said the Ann Halprin dance concert at Hunter College last year was ex­hilarating and liberating, many people in our time regard utopia as a sexual rather than a social ideal, and we have been told that the younger generation is finally overthrowing 2500 years of Platonic idealism in favor of tactility. This was to be a glimpse of the unrepressed fu­ture. Animal vitality and accep­tance would sweep the world. Que viva body mysticism!

But how sad and depressing it was. The utopian fantasies, col­lapsed, and somewhere in between the titillated media and the post-civilization on 71st Street lay hopes that this was not to be the way of all flesh.

For the most disturbing thing about the evening was its com­plete sense of unreality. At first I thought they might be laughing at how serious everyone was get­ting about such a trivial thing — ­wow, we just take off our clothes and people write articles about “glimpses of the unrepressed future.” But they weren’t putting us on, they weren’t even there. It was very much like one of those press conferences at which a public figure makes state­ments for television cameramen. The cameramen are bored, the public figure is just putting on his act for the cameras — the “reality” of the event, its es­sence, when it actually “happens,” is when the film is shown on television six or eight hours later.

Similarly, the reality of the “mass naked happening” seem­ed to lie in the media, in the pictures, in the gesture — which meant nothing except insofar as it was reported. I felt at first it would be unfair to comment as a voyeur, that one would have to swing with it in order to understand it (another Voice reporter arrested), but the only reality of the situation WAS voyeurism. We had achieved a situation in which the voyeur was more real than what he observ­ed.

For the scene — or at least this one example of it, which we can only hope is an exception —seemed like nothing so much as those futuristic movies (some of which were projected on the screens) full of pale, emotionless zombies. The participants were obviously in a state of ecs­tasy — but it seemed such a solipsistic, masturbatory ecstasy that the pleasure-principle itself may need re-definition. What a sad and lonely and disembodied ecstasy.

When telegrams announce the arrival or the Noble Savage, tactility has become the final abstraction. ♦ 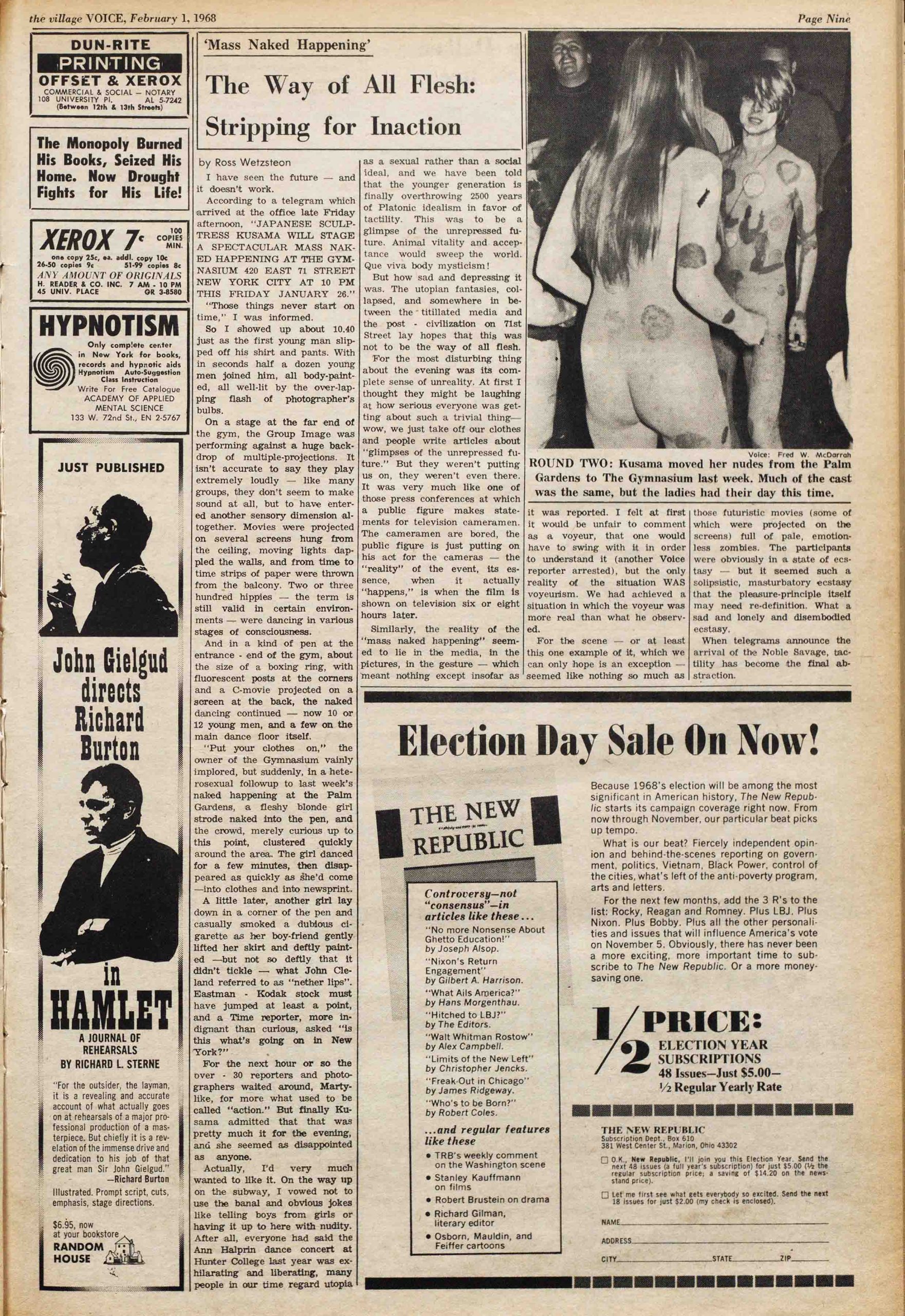