THROUGHOUT THE Watergate scandal, the operative phrase was follow the money, an axiom that also serves the PBA story.

In 1991, the PBA raised more than $7 million in dues from its members, while four distinct but affiliated PBA funds took in many millions more from New York City taxpayers. Although the main pen­sion fund for the NYPD — worth $7.5 bil­lion — is mercifully controlled by the city itself (PBA trustees sit on the board), a smaller annuity fund is maintained to pro­vide additional benefits. The city pays in $2 for each police officer each working day (261 a year). Between total contribu­tions from the city and income on invest­ments, this fund received more than $14 million in 1991. A health and welfare fund for cops on active duty took in an­other $22 million; and a comparable fund for retired cops another $20 million. For 1991 alone, total revenues coming in to the PBA, including $7 million in union dues, came to $63 million. The cop on the beat might well ask, “Where did it all go?”

Much of it went where it should have, into services for PBA members — supple­mental dental and optical coverage, death benefits, legal representation, and the like. In 1991 the PBA paid out to members $26.2 million in direct benefits. But in order to provide these services, the PBA spent $23 million, an overhead that should raise the eyelids of the sleepiest IRS or department of labor official. In fact, when the Voice presented this benefit-to-expense ratio to Bob Kobel, an IRS regional spokesman, he replied: “Given that scenario, I feel certain it would cause us to take a closer look, at least to deter­mine why administration costs are so high.”

A close look at individual expense items raises even more questions. Of the PBA’s total overhead for 1991, a large bite — $4.5 million — was paid out for legal work, la­bor negotiating, and lobbying. If you add in the $2.7 million paid for the legal repre­sentation for members, the total legal bill comes to more than $7 million. Virtually every penny of that amount went to Ly­saght, Lysaght & Kramer, the law firm that took over the PBA’s account from attorney Richard Hartman. In prior years, comparable amounts had been paid to Hartman’s firm, to cover his fees for legal work and labor negotiating.

A police officer might well ask why over the last 15 years the union has paid so dearly for labor negotiating. Hartman joined the PBA in 1978, when the base salary for police officers was $17,458 — hardly generous. Despite his skills, the base police salary has remained constant with inflation ever since. In today’s dollars, the $17,458 of 1977 would be worth $40,415. After being paid millions in the interven­ing years, Hartman has managed to negoti­ate a base salary of $40,700 — a $300 gain, not counting fringe benefits. That annual raise does not compare favorably to the ever-growing fees the PBA and Phil Caruso were granting Hartman. In 1977, the PBA paid Hartman’s predecessor $141,467 for “labor negotiating.” In 1978, Hartman’s first full year, the PBA paid him $750,000. By 1990, Hartman’s last year as the union’s negotiator of record, the PBA was paying him $165,000 a month, for a grand annual total of $1,980,000, as a labor “consultant.”

Another large bite of the PBA revenue pie — $8 million — was taken in 1991 by insurance companies. Obviously the PBA has to pay heavily for insurance to pro­vide the benefits it must. But does it need to pay as much as it does? And the ques­tion would not even be raised were it not for the fact that the year after Richard Hartman surrendered his law license, and thereby a great deal of income, PBA suddenly discovered that its members needed a new Met Life policy, the $2.2 million commission on which went to a new insurance agent named … Richard Hartman. (By 1991, the Met Life insur­ance business was transferred to the wives of James Lysaght and Peter Kramer, part­ners of the law firm that was already get­ting all the legal fees mentioned above.)

Instead of enriching cops directly, Caru­so has concentrated the PBA’s efforts on increasing fringe benefits. He argues in the Annual Report for the Annuity Fund: “The doubling of our annual annuity con­tribution by the city, won in our last round of contract talks, was significant, particularly for newer members.” But one is tempted to question both the priorities and the motives of the PBA and its negoti­ators. Unlike salaries, which flow directly from the city to the cops, the “soft” mon­ey flows from the city to the PBA, where it can be siphoned off for the benefit of a handful of friends and associates. The only significant fringe benefit negotiated by Caruso and Hartman that flows direct­ly to police members is the uniform allow­ance, which jumped from $265 in 1977 to $1000 in 1991.

The soft money has permitted the PBA the luxury of a huge overhead. In 1991, for example, the union spent $2.2 million on salaries, $900,000 for printing and publications, $650,000 on delegate ex­penses, and $340,000 for conferences and conventions. Even the relatively smaller expenses raise serious questions. For ex­ample, was the $208,000 fee paid to ac­countants Mendelsohn Kary Bell & Natoli to prepare the PBA’s various 1991 filings much of a bargain? The PBA’s 5500 forms invariably communicate as little as possi­ble. On the PBA’s 1991 filing for the an­nuity fund, for instance, MKBN lumped all assets under the familiar rubric of “other.” Yet a glimpse of the PBA’s annu­al report for the fund in the same year reveals that these assets are all invested in financial instruments for which the IRS provides line items on its 5500 forms: government securities, commercial paper, money market funds.

Indeed, the word “other” often covers some of the largest sums charged against the various PBA accounts. By the Voice’s count, in 1991 the PBA buried $6.6 mil­lion in expenses for its various funds un­der the word “other.” That, of course, would be fine if “other” were explained elsewhere. Conscientious accountants wishing to avoid audits provide supple­mental sheets where such large sums are broken down and detailed. Not so the PBA’s accountants. Two outside CPAs who reviewed PBA returns with the Voice commented that it appeared the union was not concerned about audits, almost as if it thought itself untouchable. They pointed out that several basic accounting rules had been flouted.

For example, although the PBA submits 5500 forms for each benefit plan it oper­ates, those submissions do not include re­quired Schedule P’s, which must list trust­ees and to which the trustees must affix their signatures by way of accepting liabil­ity. Also missing are Schedule A’s, which show where an organization bought its insurance, how much commission was paid, and the names of brokers. Given the amount that the PBA pays out in insur­ance premiums and the name of the bro­ker who received many of these commis­sions — Richard Hartman — the oversight is strange indeed.

Finally, there is the sheer sloppiness of the filings. The PBA’s 5500 forms for 1991 were prepared on IRS forms from the prior year. In its 1989 annuity fund filing, MKBN reported a transfer of $9.9 million into the fund. It is only when one does the math that it becomes clear that the $9.9 million was transferred out of the fund. (The money went to smaller PBAs, the Superior Officers Council, and the Detectives’ Endowment Association, for reasons that are not altogether clear). In this instance, the difference between in and out is almost $20 million. Calls to the PBA accounting firm to get clarification on this and other matters went unanswered.

The various PBA filings yield a number of other issues and questions as well. In addition to the Legal Services Fund, de­signed to represent police in various mat­ters, including house closings, the PBA maintains a separate legal assistance plan within its Health & Welfare Fund. The city gives the union $75 per police officer each year to fund this service, designed to provide legal representation in civil suits brought against police officers whom the city, for whatever reason, does not want to represent (the funds also cover “pension counseling”). According to the PBA con­tract with the city, “These funds shall be maintained in a separate account and shall not be commingled with the other monies received by the Welfare Fund.” 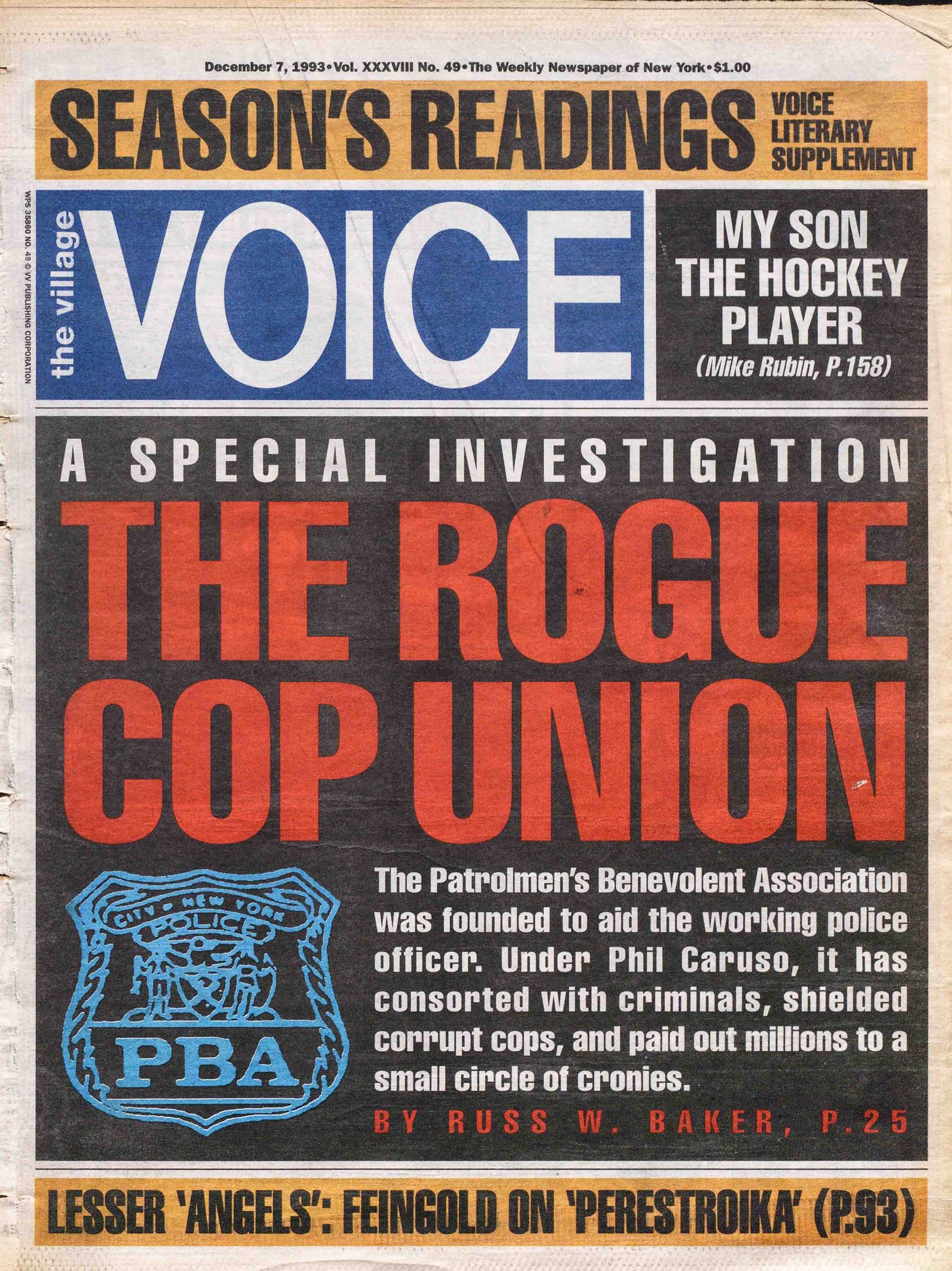 But is that what happened to the $1.4 million taken in by the welfare fund in 1991 for this purpose? The PBA appears to have paid the entire amount to the Lysaght firm. Perhaps Lysaght has the money tucked safely away in an escrow account, But the public filings of the PBA offer no such assurance, and given the PBA’s “fact pattern” — as it’s put in law­-enforcement parlance — of raided escrow accounts and huge fees to lawyers, the transfer to Lysaght is disturbing. Did rank­-and-file police officers really need $1.4 million worth of legal representation for civil matters and pension counseling dur­ing the year? And if not, what is happen­ing to the accumulating funds? Does the city need to continue to fund this account at this level?

The biggest PBA account is the annuity fund, and the natural question is, how is all this money being invested? It is a question Caruso himself addresses in the annuity’s 199 l annual report to members. “The interest yield on An­nuity Fund investments last year was far from awesome,” he wrote, “but nonetheless strictly in keeping with prevailing rates.” In 1991, the annuity fund earned just under 6 per cent.

Interests rates are, without question, down among all varieties of pension plans. But 6 per cent or under is not the prevailing rate. And there is a larg­er question about the PBA’s annuity fund that centers on the pattern of investing. With a stream of city reve­nues large enough to cover the antici­pated direct benefits to members, the annuity fund would seem to have very little need for liquidity. Yet over $40 million of its $55 million worth of assets are held in short-term financial instruments, with only $15 million in long-term. Had more long-term invest­ments been made years ago, they would still be yielding 8 per cent or better. Even long-term assets purchased today’s markets could yield as much as 7 per cent. Those numbers suggest that the PBA annuity fund could have fared much better. Com­ments James Hanley, the director of the city’s Office of Labor Relations: “I know other uniformed service heads boast they’re still doing 11 per cent and 12 per cent.” While Hanley’s numbers seem over the top, The New York Times reported this week that more than 80 per cent of U.S. corpora­tions interviewed recently about their pension funds base their decisions on an annual return of better than 8 per cent. Only 2 per cent anticipated inter­est rates below 7 per cent.

Who is really paying attention to these PBA accounts? According to Hanley, it should be Comptroller Eliz­abeth Holtzman’s office. Yet the comptroller’s office has yet to com­plete its only PBA audit during Holtz­man’s tenure, and it is not looking at the annuity fund. Indeed, Holtzman’s office took two months to confum for the Voice that it still had the authority to monitor the PBA following changes in the 1989 city charter.

The good news in reviewing the po­lice union’s public filings is this: be­cause neither the organization nor its accountants seem to have filed the proper Schedule P’s bearing the signa­tures of the trustees, the statute of limitations is thereby waived. The first auditor to have an extensive go at these books — perhaps incoming comp­troller Alan Hevesi — should have a field day. And he can take all the time he wants. ■ 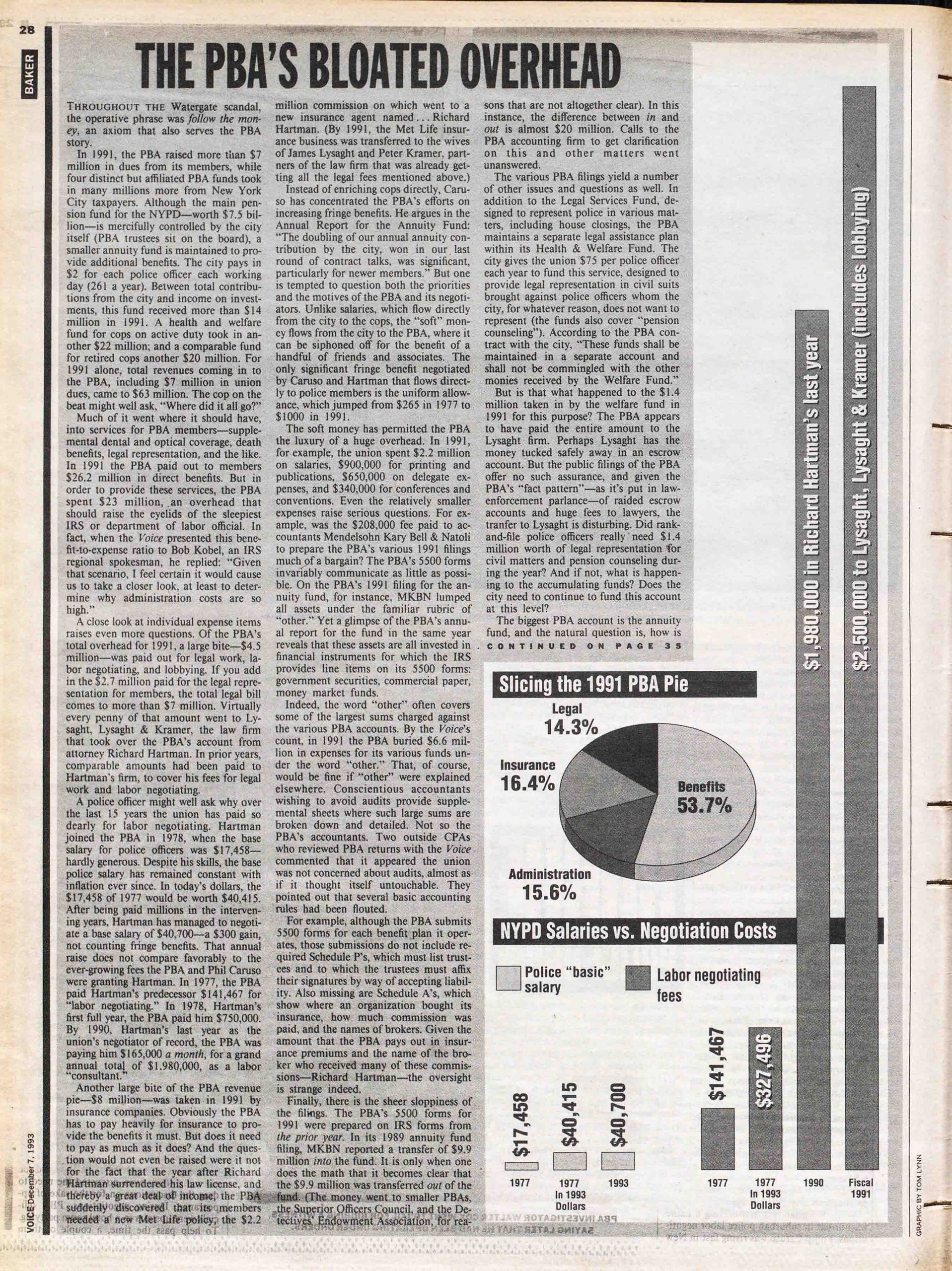 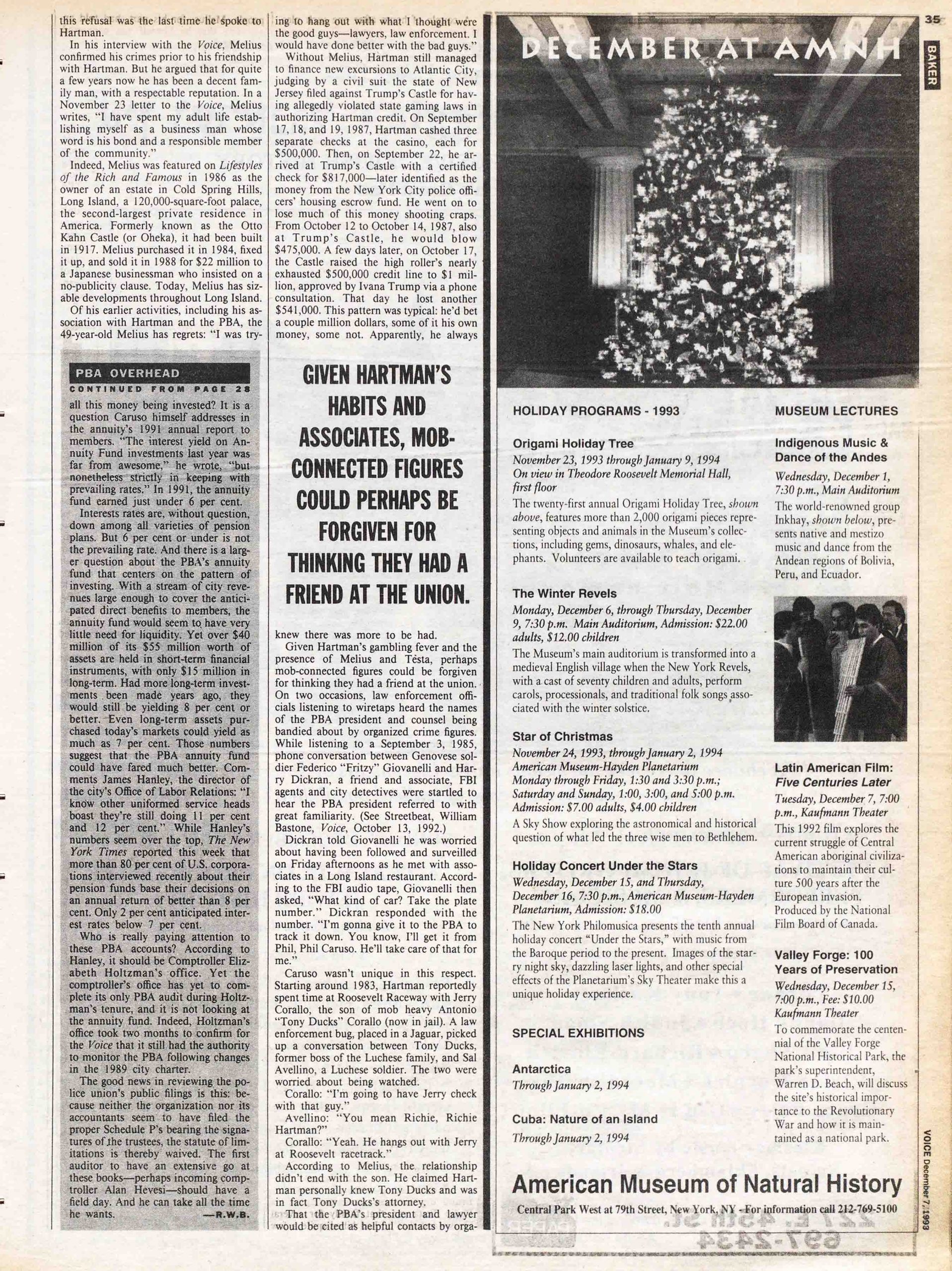